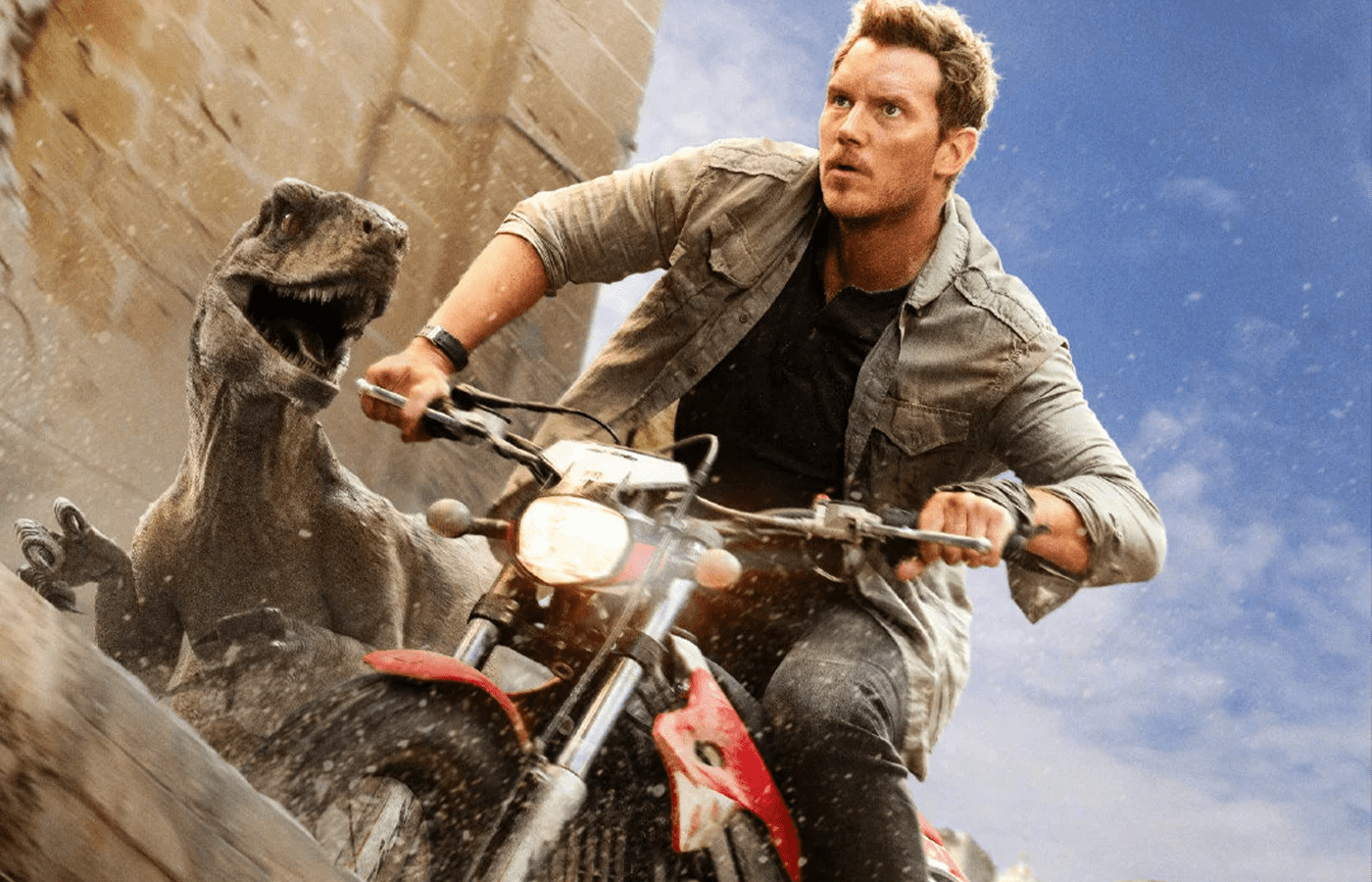 I love dinosaurs! There I said it! To be specific I am a fan of the two major portrayals of these ancient animals: the scientific research in the studying of ancient life and the kick-ass movie monsters we have seen since the inception of filmmaking. For the latter, I am very easy to please when it comes to dinosaur films as long as the overall viewing experience was enjoyable and nothing really irked me along the way.

With that being said I was still cautious going into Jurassic World: Dominion as the Jurassic Park/World films have a bit of a rocky foundation as sometimes they’re great and sometimes they’re stinkers. And now having seen what is meant to be the epic conclusion of both the Jurassic World trilogy and this franchise as a whole, it’s clear Universal wanted to bring the energy of their theme parks in cinematic form: well-made but shallow fun. This new Jurassic Park movie is just what 2022 needed… let’s get into it.

The plot of Jurassic World: Dominion is actually an interesting direction as it’s technically two storylines that merge in the end. The setting of the film is that four years after the events of Jurassic World: Fallen Kingdom, dinosaurs are now loose all over the world. With dinosaurs now loose across the globe, to no one’s surprise these creatures are causing havoc being lost in an alien world and conflicting with humans.

As such the totally not shady company Biosyn, who was a competitor of the company that created the dinosaurs InGen, is leading the effort to capture the dinosaurs and put them in a preserve as headed by CEO Lewis Dodson. Yes, the same Dodson that met with Dennis Nedry (Wayne Knight) in the first Jurassic Park, only this time being played by Campbell Scott.

As for Jurassic World Dominion’s actual plot as said before there are two plotlines throughout the film. The first plotline involves the Jurassic World protagonists Owen and Claire caring for Maisie Lockwood, the “granddaughter” of InGen co-founder Benjamin Lockwood who in actuality is a clone of his daughter.

They soon discover Owen’s trained Velociraptor Blue had an infant without the need for a mate and after that revelation, the baby raptor Beta and Maisie are kidnapped by Biosyn. Thus Owen and Claire travel across the globe via the illegal dinosaur black market to find their adopted daughter and Blue’s own child.

The second major storyline of Jurassic World Dominion concerns the original Jurassic Park protagonists Alan Grant, Ellie Sattler, and Ian Malcolm trying to uncover a conspiracy involving Biosyn and them unleashing genetically engineered Locust that is ravaging the world’s food supply except to plants engineered by Biosyn. This leads to the trio infiltrating Biosyn and soon having to deal with both their security and the dinosaurs within their so-called ‘Sanctuary”.

Starring the ensemble cast of Sam Neill, Laura Dern, Jeff Goldblum, Chris Pratt, Bryce Dallas Howard, and BD Wong all reprising their roles from across the Jurassic franchise, the film certainly has a hell of a cast. While Chris Pratt and Bryce Dallas Howard do a good job as their Jurassic World characters Owen Grad and Claire Dearing, let’s be honest all of our attention is turned towards the returning trio of Alan Grant, Ellie Sattler, and Ian Malcolm.

So do the original ‘JP’ actors still got it after all these years? The answer is yes for the most part. Sam Neill and Laura Dern are the MVPs of the film as their chemistry is just as good as today as it was 29 years ago. Dern especially captures that spunky energy of Ellie Sattler and was a delight every time she is on screen.

RELATED: The Lost World And Its Renewed Importance

One downside of the returning cast surprisingly enough is Jeff Goldblum. While one would think having a healthy amount of Goldblum would be a great benefit, the issue is Goldblum is just being himself and not the character of Ian Malcolm. People forget that Ian Malcolm is more than the charming awkward energy of Jeff Goldblum and has moments of deadly seriousness, an aspect severely lacking in this film sadly.

As for the Jurassic World side of the cast they did a decent job. Pratt and Dallas Howard are decent actors and the issue is that makes them not completely engaging so whenever the movie returns to them I go “oh right they’re in here as well”. That all changes with newcomer DeWanda Wise who plays Kayla Watts, a sharp-witted pilot who is one of the most fun characters in the film along with Sattler and Grant.

Storywise Jurassic World Dominion is very straightforward which makes it a benefit and a detriment. We are six movies in a franchise that has clearly run out of steam so it’s clear director Collin Trevorrow basically wanted to give audiences a non-stop dinosaur adventure with different set pieces of the dinosaurs in our world. This helps in making this over two-hour movie not feel so long and maintain some constant form of entertainment, but that makes the movie very shallow in the process.

Jurassic World Dominion is a monster movie first and foremost, so if one wants the thoughtful philosophies from the original Jurassic Park, you’re not getting that here. That sadly even affects the major plot point of the dinosaurs being in our world now. What could’ve been a great avenue of debate on these creatures is the root of this franchise is instead just an excuse to have dinosaurs wreak havoc in new settings. Not to mention the film kinda gives up on a solution for them in the end.

This is most egregious with a major element of the film’s plot: the locust. So you think the major driving element of this film as seen with the ending of Jurassic World Dominion would be the chaos of dinosaurs on the mainland but instead, the plot is focused on BioSyn’s genetically engineered Locust. While that is actually an awesome idea to explore in a Jurassic film, it feels unnecessary and overshadows the promise and implications of the dinosaurs in our world setting.

Despite the very weak plot Jurassic World Dominion still gives us A LOT of dinosaurs and they steal the show every time they’re on screen. For one we get a grand return of practical effects. Sure Fallen Kingdom had some impressive use of practical dinosaurs, but they’re a much more of them in this film and it makes the immersion of the dinosaurs in our world much stronger.

There are also some great set pieces with the dinosaurs with highlights including Bryce Dallas Howard dealing with the hostile Therizinosaurs and the awe-inspiring Giganotosaurus attack in the film’s climax. So if you want dinosaurs, you get plenty of dinosaurs in Jurassic World Dominion.

Life Has Already Found A Way

So overall Jurassic World Dominion is a fun but dumb monster movie of the summer. I definitely had a fun time watching this film and I say it’s nowhere near as bad as this franchise can get, I also will say this really should be the end of the Jurassic films as we really have nowhere else to go now.

In all honesty, watching this film captured a part of the franchise that haven’t had since I was a kid and it wasn’t the feeling of seeing the Steven Speilberg classic but rather playing those ridiculous Kenner toys. Like the Kenner toys of the 1990s, Jurassic World Dominion really is just “aren’t dinosaurs cool” the movie and for good and for ill that’s really what you get out of it.

Are You A Fan Of Jurassic World: Dominion?

We hope you enjoyed our review of Jurassic World: Dominion. What did you think of this film? Let us know on social media!