Looking back at the haunting Kara no Kyoukai animated film. 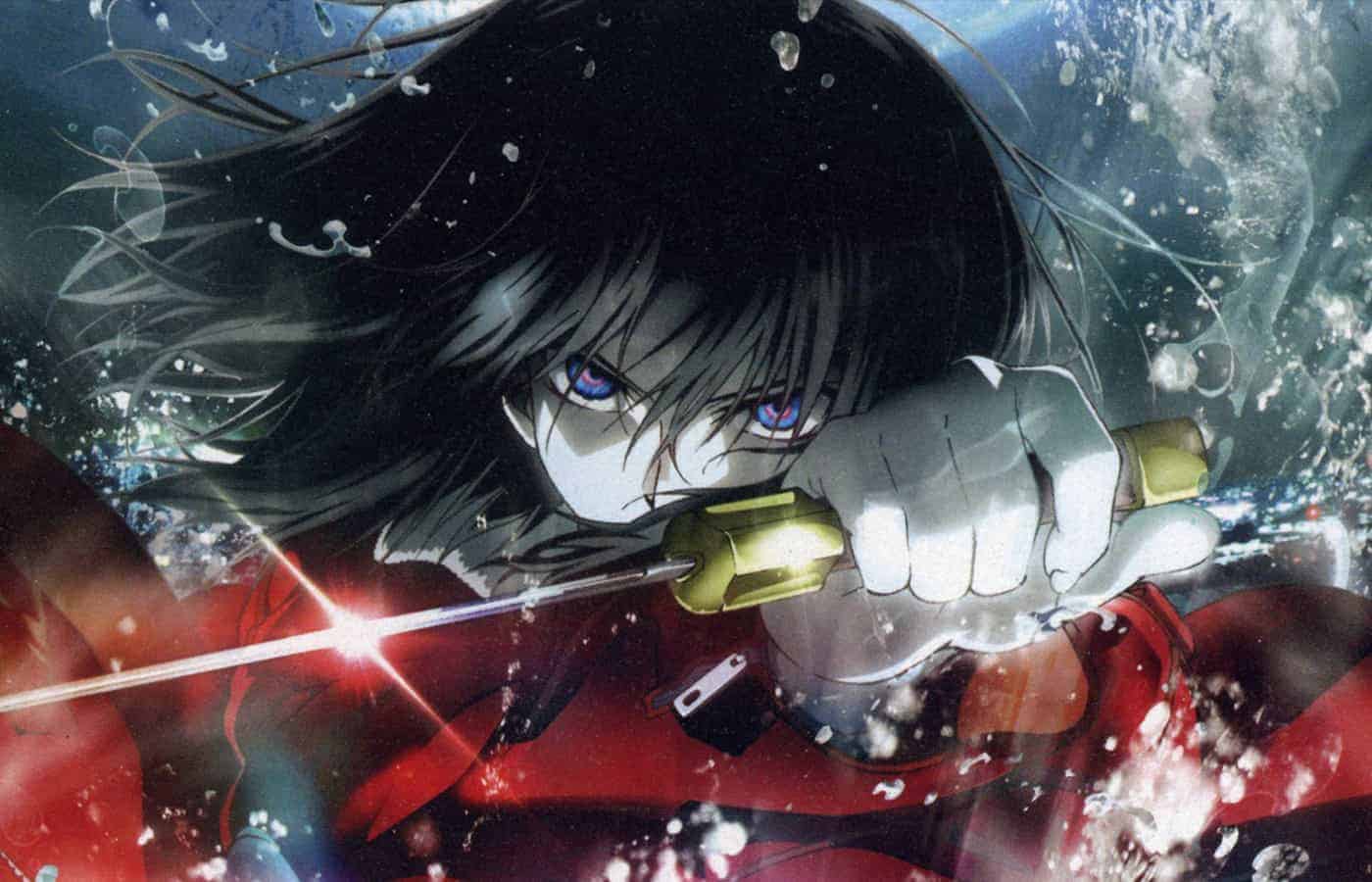 Directed by Ei Aoki and written by Masaki Hiramatsu, The Garden of Sinners: Overlooking View (2007) follows a recent trend of unusual suicide incidents where several high school girls fell to their death without any known cause. The film stars Maaya Sakamoto, Kenichi Suzumura, and Takako Honda. Rather than a haunted house, we have a haunted desolate apartment building. It’s this use of a modern setting that really sets Kara no Kyoukai apart, with it being able to connect to modern-day fears and thoughts.

A boy visits a girl in her apartment and proceeds to have a conversation. We cut to a woman standing on a rooftop, then cutting again to a surrealist sequence of a butterfly before ending on a woman dead on the ground. This is the start of Kara no Kyoukai, otherwise known as The Garden of Sinners.

What is Kara no Kyoukai?

Kara no Kyoukai is the first full-length entry in what has since been dubbed The Nasuverse, after its creator Kinoko Nasu, which is a series of works that are set in the same multiverse, often sharing similar themes and genres, all having a fantasy element to them. Kara no Kyoukai itself started as a web novel before transitioning to physical releases after its great success online, only to then progress to becoming adapted as a series of anime films by Ufotable.

They are the studio that did last year’s record-breaking hit Demon Slayer: Kimetsu no Yaiba The Movie: Mugen Train, in what could be considered the studio’s first big project. With the creator themself deeming Kara no Kyoukai unadaptable, the massive success they had was a turning point for the Nasuverse as a whole.

What is Kara no Kyoukai About?

Well, Kara no Kyoukai is the coming-of-age story of its two main characters, Mikiya Kokutou, voiced by Kenichi Suzumura, and Shiki Ryougi, voiced by Maaya Sakamoto, and their experiences with the paranormal while working as a detective and trained muscle respectively under magus Touko Aozaki, voiced by Takako Honda.

While the seven stories in the mainline of films can all be considered standalone with them being out of order for the first 4 parts, they all build off each other before culminating in the finale which is Kara no Kyoukai: A Study In Murder-Part 2 also known as Kara no Kyoukai Part 7.

The Horror of Kara no Kyouaki

Kara no Kyoukai’s genre could basically be described as urban fantasy meets J-horror in terms of its approach to its subject matter, with its horror being in the urban space as well as its fantasy elements. Rather than a haunted house, we have a haunted desolate apartment building. It is this use of modern settings and ideas that really sets Kara no Kyoukai apart in this aspect, with it being able to connect to modern-day fears and thoughts.

This is probably best shown in the aforementioned apartment building chapter, Part 5: Paradox Spiral. In that chapter, while investigating the apartment building, Mikiya and Touko remark on how wrong it is and the uneasy feeling of the elevator in particular. That is something many who’ve lived in or been too big cities can relate to; those odd apartment buildings or hotels which just feel a bit off, a bit eerie.

This helps set Kara no Kyoukai apart. Its horror is, as mentioned, not found in far-off places but found in the streets of its cityscape setting where all manner of ghosts, evil mages, or serial killers can be lurking. It’s in this primal horror that Kara no Kyoukai excels, by also using this sense of horror to its advantage, in where Kara no Kyoukai is able to make itself be really effective, which is in its themes.

Unpacking The Themes of Kara no Kyoukai

While each entry of Kara no Kyoukai has its own themes, ranging from the morality of suicide in Part 1 to family in Part 5 and the trauma of sexual assault in Part 3, its main theme really is shown in the literal translation of its Japanese title, that being Boundary of Emptiness. Shiki Ryougi truly embodies that title, after losing her alternative personality at the end of Part 2 (which despite the title takes place the earliest in the timeline). Shiki’s main driving force is this emptiness that she feels.

Perhaps this is best exemplified in Kara no Kyoukai by the antagonists, whose emptiness varies in the cause, but all leads them to do what can only be described as horrific actions. While this encompasses all the villains from Part 1’s Kirie Fujo, whose J-horror ghost aesthetic and powerset is perhaps the most overt horror villain in the series with her emptiness coming from being confined to a bed all her life and Part 3’s vengeful telekinetic assault victim Asagami Fujino, whose emptiness comes from her victimhood. It is perhaps best exemplified by the villains of Part 5 and Part 7, Araya Souren and Lio Shirazumi.

Araya Souren, voiced by Jouji Nakata, is the main villain of Kara no Kyoukai, a magus who was once a friend of Shiki and Mikiya’s mentor, Touko, with him orchestrating the events of every film, and his presence is felt even after his death in Part 5.

However, Araya Souren connects strongly with the message of emptiness through his motivation, which is to bring meaning to every death by orchestrating the aforementioned apartment building. By observing every death over and over while reaching the heart of the root (The Nasuverse’s version of Nirvana), Araya believes he can see every death that has ever occurred in his mind, giving it meaning by letting it be observed.

Araya is heavily implied to be a near-immortal being, with Part 5 showing him with multiple bodies he’s created and showing the moment his emptiness began with a shot of him on a desolate battlefield. It’s this desire and loss of hope that instilled Araya with his sense of emptiness, one that he tried to solve within himself only. In sharp contrast to Shiki, who surrounded herself with people, Araya is innately alone. This is best summed up by his final lines before his death in Part 5, where he says he seeks meaning in this world but can only try to find it within himself.

The other villain who best exemplifies this is Lio Shizarumi, voiced by Souichiro Housei, a serial killer who consumes his victims after being given magical powers by Araya Souren to attempt to defeat Shiki. Lio’s emptiness is on clear display, being turned down by Shiki in high school and trying to find meaning by finding someone as disturbed as he is.

He becomes obsessed with Shiki and makes her fall to his side and become a murderer like he is, to the point of stalking her, kidnapping her, dressing up as her, and trying to kill Mikiya. It’s in this that he’s probably the biggest mirror image of Shiki. What she’d become if she were to give in to her darkest impulses.

However, Kara no Kyoukai doesn’t say that emptiness leads to only bad things or can’t be fixed. Beyond Shiki herself, the deuteragonist of Part 5, Tomoe Enjou, voiced by Testuya Kakihara, best shows this. Introduced as someone who’s lonely and has had a bad lot in life, Tomoe has nothing after he and his family have lost everything.

Meeting Shiki is what gives him purpose to the point where in the fight against Araya, he sacrifices himself to save her, even after Araya is revealed to have in a sense brainwashed Tomoe into seeking Shiki out. This theme of other people being able to pull you out of that sense of emptiness, though, is the main crux of Shiki’s arc throughout Kara no Kyoukai.

All seven films build upon her relationship with Mikiya, climaxing with her realizing in Part 7 that he was the one who gave her meaning after losing her other personality. It’s through love that Shiki is able to fill that boundary of emptiness within her, with that being the series’ main message most of all.

What Do You Think Of Kara no Kyoukai?