Why Are We Obsessed with Killer Clowns?

It is a fact that killer clowns in movies are here to stay. Unlike zombies that have their peaks and valleys, clowns are the horrific constant. 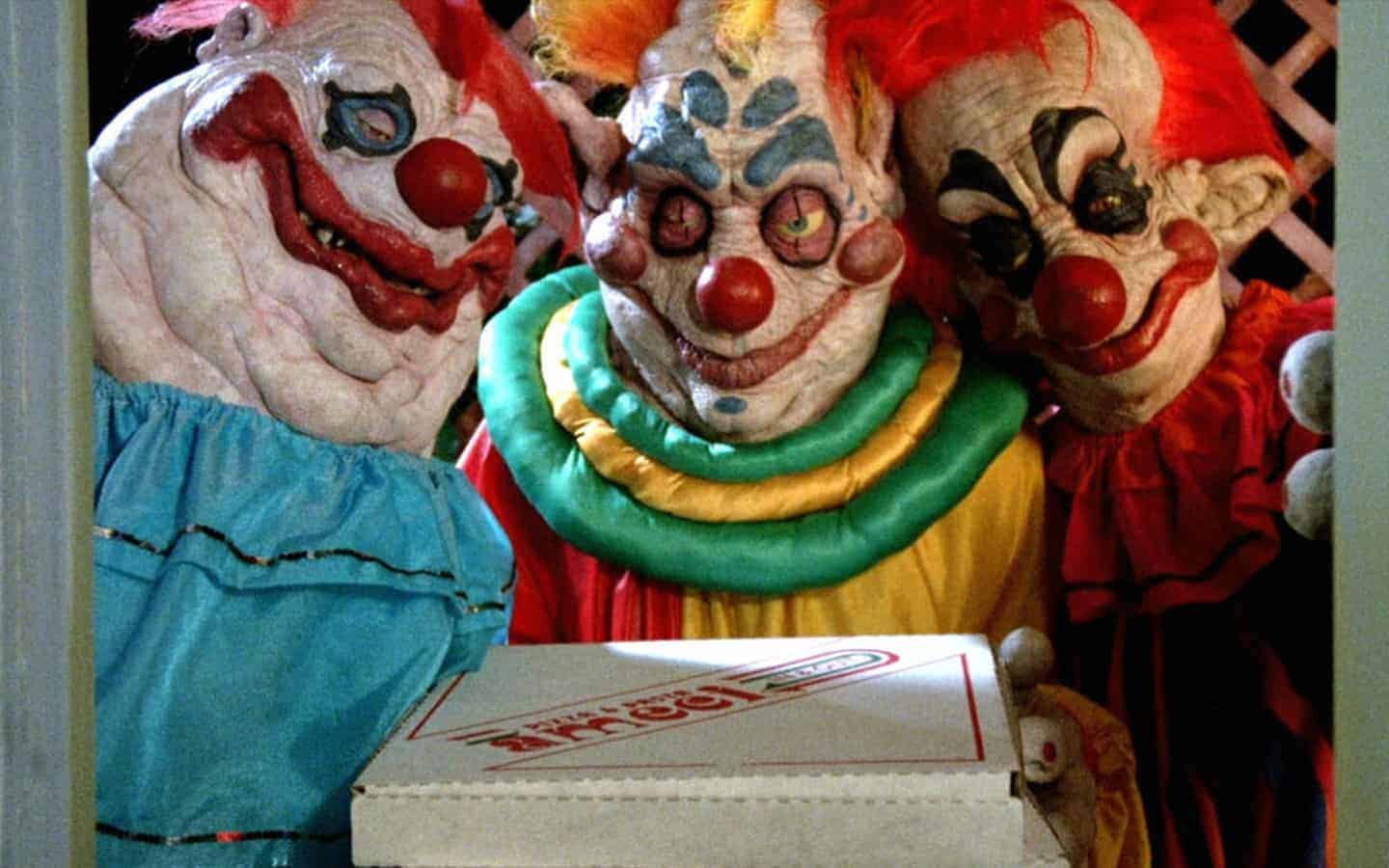 It’s a fact that killer clowns in movies are here to stay. Unlike zombies that have their peaks and valleys, clowns are the horrific constant.

Clowns are freaking scary. We can all admit that, right? Whether it is the clown roaming our streets back in 2016 or the Clown Prince of Crime carrying out another diabolical plan to even an ageless shapeshifting alien taking the form of a sewer-dwelling clown, the painted face buffoons have always been scary to a degree. So, what is it exactly about them that we find so creepy and scary, and why are Killer Clowns in media so popular?

Clowns date back to ancient Egypt where the Pharaohs and Royal Families kept African Pygmies as entertainment. They would dress up in leopard skins, wear masks, danced, and performed imitations of the Gods. For them, clowns and comedy were serious business but alas all we have to go off are the hieroglyphs and some texts. But, unfortunately, these impressionists aren’t remotely scary and definitely don’t fall under the cloud of killer clowns.

Now, let’s jump ahead to Medieval Times where clowns and harlequins were the norm. Most of these were for the royals and mucky-mucks of the time and honestly, this is where we begin to see clowns start to become their well-known darker selves. Each man who was made a clown, harlequin, or jester had their faces mutilated so that they would have a permanent grin frozen on their faces. This was achieved by cutting the muscles that controlled the mouth’s ability to frown. Which was the inspiration for Victor Hugo’s Gwynplaine in The Man Who Laughs (1869), which was so memorably adapted in 1928 with Conrad Veidt as the main character.

This brings us to the first true evil killer clown in media. DC’s The Joker! Of course, everyone knows that the original design of the Joker was inspired by Conrad Veidt’s portrayal of Gwynplaine, what we don’t know though is exactly how the character was created. But, that’s not the point of this article. What is the focus on the Joker’s methodology of causing pain, panic, havoc, and mayhem.

Originally conceived as a deformed serial killer, the Joker only displayed the image but none of the characteristics of a true clown. That wouldn’t happen until the 1950s and the invention of the Comics Code of America. This made the Joker much more silly to adult readers, but from that point on Gotham’s Clown Prince of Crime would use the trappings and iconography of clowns and the circus to greater effect. Flowers that squirt acid, comically oversized guns, exploding juggling pins, and rubber chickens filled with Joker’s laughing gas. This made the Joker the first prime example of an evil killer clown. But then the 1970s came a-calling.

A real-life killer clown appeared on the scene that would change everything completely. Pogo the Clown aka John Wayne Gacy assaulted and murdered at least 33 young men and boys. The media dubbed him ‘The Killer Clown’ and this is all I’ll say about him. As a real-life killer clown, the only reason he is mentioned here is because of the rumors saying his heinous crimes partly inspired the most famous and terrifying of all killer clowns.

Pennywise the Dancing Clown, often considered THE killer clown in media, from Stephen King’s epic 1986 novel IT is not your standard scary harlequin. Not in the slightest. Now, for the few of you out there who haven’t read the book or seen the adaptations, I’ll wait while you right this wrong…Done? Good! Lets us continue. Pennywise is the main disguise of an older-than-time itself inter-dimensional being, the titled It. The reason or part of it that King chose a clown to be the main form of his child-eating horror is as the man himself once said, “What scares children more than anything else in the world?… Clowns!”

But, there is a problem with including Pennywise in any discussion about Killer Clowns in media, and simply put it’s that Pennywise is actually not a clown! Sure, he looks like one and sometimes acts like one (kinda) and has balloons. But really that’s it, which brings up a very important question; what classifies as a clown? Is it the appearance? The behavior and attitude? Is it the equipment used? Or a mixture of all? And this is the thing, Pennywise is so scary, not because he is a clown but because it has the ability to become whatever it is that the victim is most afraid of. The Dancing Clown itself is just a lure, a disguise that hides the true monster lurking beneath. What this means is that Pennywise doesn’t actually count as a true Killer Clown. But the performance of Tim Curry in the 1990 miniseries has cemented the character as the grand high poo-bah of all Killer Clowns.

Of course, to see true deadly killer clowns in media we must jump forward two years. To 1988 and of course the pinnacle of the sub-genre, Killer Klowns From Outer Space. The cult classic, experiencing a resurgence, has everything you’d want from a killer clown movie, outrageous deaths caused by popcorn shooting guns, fairy floss that cacoons people until they are devoured by the Klowns, and of course a balloon dog that tracks their victims. Now, before you cry “But these are aliens, just like Pennywise! Why do you prefer these guys?”

Just let me explain, yes these are aliens but unlike Pennywise, the titled monsters actually act like clowns. They goof around with each other and their victims, making shadow puppets, riding coin-operated kid rides and in one particularly creepy scene, one of the Klowns uses a victim as a ventriloquist dummy. Killer Klowns From Outer Space is the perfect movie to introduce someone to the sub-genre. It has everything going for it, from the costume designs to the circus-inspired theme song from The Dickies, Killer Klowns is ripe with the iconography and scares of any Killer Clown movie.

Of course, since 1988 there have been other contenders for the best of Killer Clowns in media and its history, Art the Clown from Terrifier (2016), Gags from Gags The Clown (2018), and definitely the closest contender, Stitches from Stitches (2012). But to be honest none of these match the ingenuity and uniqueness of Killer Klowns, but the big question is this: Why are Clowns scary?

According to Mariana Alvaradejo (Bachelor of Psychology from the National Autonomous University of Mexico, UNAM), clowns are scary because of the wonderful phobia, coulrophobia. And for those not in the know, a phobia is related to something that cannot hurt us, an irrational fear if you will. And this ties into the fear of the unknown which is what she says is the main reason for people being scared of clowns.

This ties into the fact that a clowns face is that of something constantly happy but we have no idea what is really going on underneath, and the fact that the image of someone childlike and always laughing attached to the body of an adult is weird and the costume just takes it to the next level. A perfect example of this is Tim Curry’s Pennywise when he is talking to Georgie at the start of the 1990 miniseries he is all smiles and laughs but then the moment when Georgie asks if the balloons float, the smile remains but the rest of the face is completely blank. A very unnerving moment to witness.

It is a fact that Killer Clowns in media are here to stay, forever. Unlike zombies or vampires which have their peaks and valleys, clowns are a constant force in the horror genre. Part of this comes from, as Mariana Alvaradejo says…

“…the fear of the unknown, which is a constant fear for everyone. And because humanity is evolving faster and faster with leaps and bounds in technology so too does this universal fear evolves. As soon as we know something there is a multitude of new questions that we cannot answer. And the fear of clowns will evolve as we do and will always be there.”

A big thank you to Mariana Alvaradejo and to In Praise Of Shadows whose video The History of Scary Clowns helped with the writing of this article.