Did you know that in the Japanese version of King Kong vs. Godzilla, Godzilla actually wins and not King Kong? Well, no, not really. 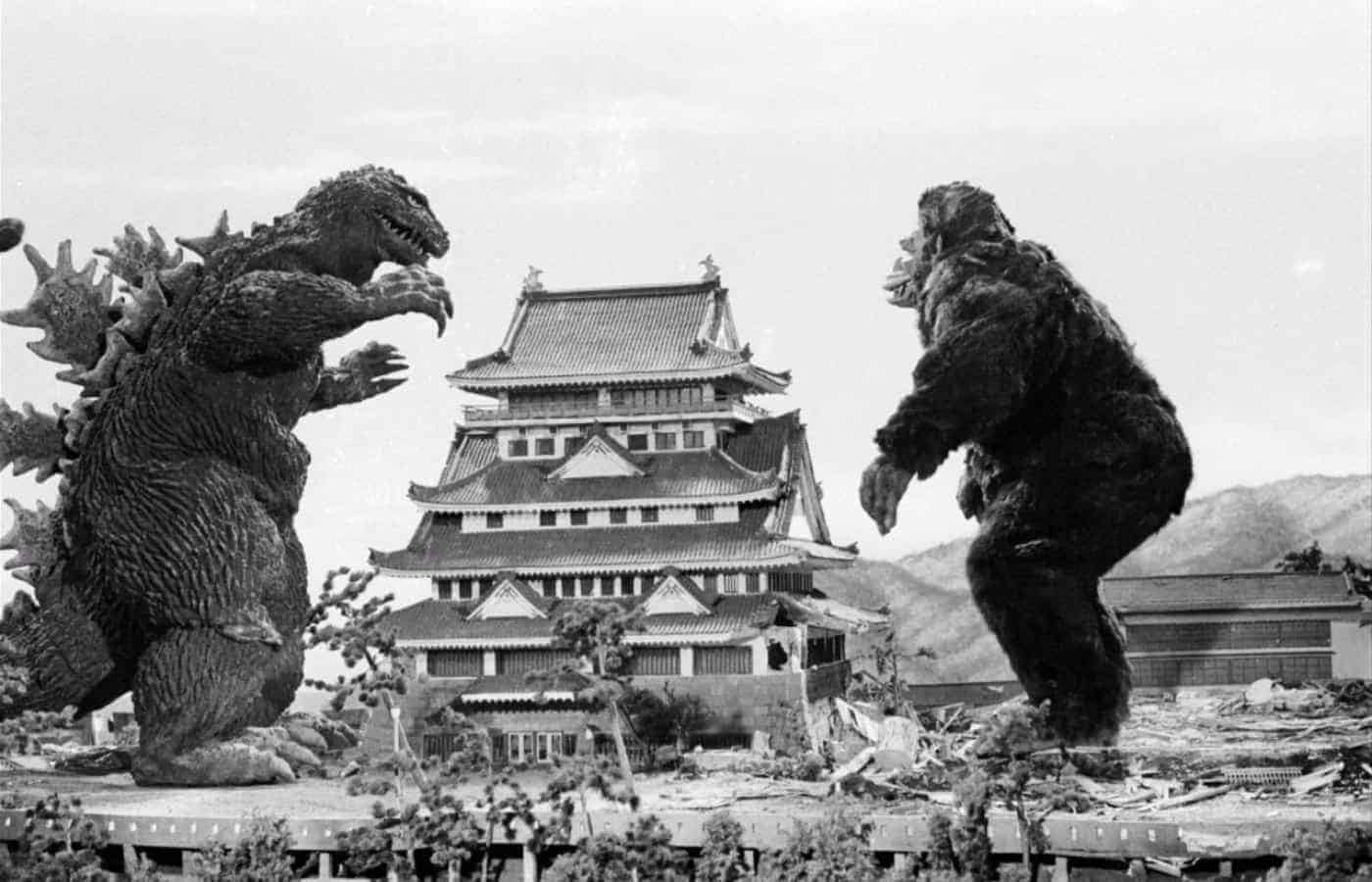 Did you know that in the Japanese version of King Kong vs. Godzilla, Godzilla actually wins and not King Kong? Well, no, not really.

As I’m sure we all know by now, the most significant change to the ending of King Kong vs. Godzilla is that in the original Japanese version, as King Kong swims away in victory and the end title card plays, both his and Godzilla’s roars can be heard, as a kind of curtain call thanking the viewer. The American version only retains Kong’s roar.

Regrettably, Godzilla’s roar is not the only thing changed in the film’s mangled and much-maligned American cut, but what has not been changed is the ending. Kong defeats Godzilla in every version of the battle of the century you’ll watch.

However, for decades, the idea of there being two endings to King Kong vs. Godzilla—the American cut where Kong wins and the Japanese cut where Godzilla does—was the finest and most enduring urban legends in the kaiju/tokusatsu fandom. Us G-fans can only call it an urban legend in hindsight, though. Before the days of the world wide web and the ease of copies of the film, the myth of the alternative endings of the 1962 Toho classic was less rumor and more stone-cold fact.

The history of this urban legend is a fascinating glimpse into fandoms before the internet and social media and an exercise in how misinformation can spread, covering as much ground as King Kong and Godzilla’s brawl from Mt. Fuji to Atami Castle.

A Gift From Spacemen

The birth of the alternate ending urban legend is most often attributed to Famous Monsters of Filmland magazine, which, ironically enough, is yet another misconception. The rumor first appeared in the pages of Spacemen magazine, which was another rag from Forrest J. Ackerman’s Warren Publishing line, like Famous Monsters.

In September 1963, three months after the US release of King Kong vs. Godzilla, an article ran in Spacemen #7 proclaiming the “RETURN OF KONG!” It’s a strange piece read in the modern-day. Like all film spotlights found in the pages of Warren Publishing releases, the article is all plot synopsis and no review) and begins trying to connect the continuity of the Toho film to the original 1933 King Kong for some reason.

It is in the closing of the article where the author drops the supposed bombshell that genre film fanatics would discuss and debate for years. Now, there is no readily available research that can suggest where the claim of the alternate endings came from. Did the author or editor Ackerman come upon this information from another source? Did they conjure up the misinformation simply because they could? Why? Those answers are lost to horror history.

Whatever the case may be, the urban legend became a trivia fact. Literally. The alternate endings to King Kong vs. Godzilla rumor was so widely accepted that it was an answer in Trivial Pursuit. The question becomes, then, just how could something said in a sci-fi magazine about a kaiju film reach the mainstream in such a profound way?

Colossal Talk of the Town

Urban legends only become urban legends if they’re retold. In this case, the proliferation of King Kong vs. Godzilla’s alternate ending urban legend is yet again thanks to Uncle Forry and Warren Publishing (at least in part).

After Spacemen magazine ended its short run, the myth of the endings would be repeated several times in subsequent issues of Warren’s most popular publication, Famous Monsters. Sincere examinations of kaiju films (or any genre film for that matter) would not come into vogue for more than twenty years after King Kong vs. Godzilla’s release, and because of that, the monster magazines were the only reliable sources for information on these films and their productions.

Famous Monsters reigned supreme over all others, so they were the authority. What they printed was absolute to horror fans. So, Warren Publishing would repeat their erroneous claim for years, and others would pick up on the myth and spread it even further.

This was the case within the pages of the infamous Monster Series: Godzilla book by Ian Thorne, the pseudonym of science fiction author Julian May, who published this, and the other books in the series highlighting fearsome film figures like Dracula and Frankenstein’s Monster throughout the 70s. These slim tomes were incredibly popular with young monster kids and could be found on the shelves in every book store and every public or school library.

The Godzilla volume was considered the most popular of the series. So, with an impossible-to-calculate readership over the course of years and years, countless G-Fans were introduced to and made to believe in the myth of King Kong vs. Godzilla’s dual endings in Ian Thorne’s mostly fictional book.

Just think, if any of those fans also read Famous Monsters and happened across the claim, that would be two “reliable” sources that confirmed to them that somewhere out there existed a version of this battle where Godzilla hands King Kong a big ol’ L.

These publications are just two examples of the urban legend being retold—two examples that will be very recognizable to G-Fans. Speaking socially, we only need to imagine the conversations between friends about the rumor they heard that the film had two separate endings.

Then there are the instances where the myth was repeated in more mainstream outlets like the aforementioned Trivial Pursuit game. It was even reported by major news networks and papers, and since there was no way to actually see the Japanese version of King Kong vs. Godzilla, and no one with any real knowledge debunking the myth, it’s no wonder how this misinformation was able to enter the public consciousness and remain there, even now when the truth is readily available.

I don’t quite remember the first time I heard the King Kong vs. Godzilla urban legend. It may have been in Ian Thorne’s Godzilla book. I do have a memory of my Uncle Ronnie telling the tale to me when I was very young and still carried a Godzilla toy with me everywhere in case the world got too big and scary, and I needed the protection of the King of the Monsters.

I wouldn’t stay in the dark for very long, though, because, unlike Uncle Ronnie, I was growing up just as the internet was becoming a household thing like cable or electricity. I had access to sites that debunked the rumor for me.

There was also G-Fan Magazine, which used to be an avenue for reliable information. Then, of course, there were opportunities to see the Japanese version of the film, like when I obtained a “homemade copy from a gentleman in Chinatown who the cops were not fond of” (wink, wink). So, my experience with the myth was short-lived comparatively.

G-Fans older than me likely discovered the truth in time, maybe online around the same time I had. However, those were the folks who were seeking out the information. There were likely many who heard the myth and never cared to look up King Kong vs. Godzilla. They simply didn’t care to do so because they were not a part of the Godzilla fandom, and that group of people greatly outnumbers the community itself.

So, the urban legend persists because the general pop-culture consciousness has largely been uninterested in investigating this claim any further, and this is really how actual urban legends and rumors remain alive.

Concerning us G-fans, though, the urban legend of King Kong vs. Godzilla’s alternative endings doesn’t only represent misinformation, but also the drive of the fandom, in a way.

Despite the Godzilla franchise boasting close to 40 films, countless pieces of merchandise, remakes, and spin-offs, there isn’t a lot left to be discovered under the fandom’s sun. Kaiju fans are lucky to have the Legendary films, anime films, and series, and the promise of more Toho produced live-action releases after the success of Shin Godzilla, but this renaissance was preceded by a decade long dry spell of no new content after the swan song that was Godzilla: Final Wars.

The internet has brought the community together in such a profound way, though. That interaction serves to keep people engaged while waiting for new content, which wasn’t the case for fans in the years before. Back then, you could go years without even hearing about the news of a forthcoming Godzilla project. Imagine the dry spell between Godzilla vs. Biollante and Godzilla (1998), where you may have heard that the Heisei series was in full swing over in Japan, only to be disappointed when those flicks never made it stateside in a legitimate release.

An urban legend about something you have never seen out in the wild somewhere would light up the imagination of anyone’s imagination, and that is exactly what the fabled dual endings of King Kong vs. Godzilla did for the pre-internet fandom. I wouldn’t be surprised if a rumor like this would keep the fandom alive for many, because while there were only so many times you could rewatch your VHS copy of Godzilla vs. Gigan, the promise of there being more, and that you could experience that someday, was too exciting to resist.

The days of these kinds of promises may be over in the internet age. Perhaps, if King Kong vs. Godzilla were released today and the rumor was started that there were two different winners in this epic encounter, fact checking and the Godzilla fandom online would stomp that out before it had a chance of becoming urban legend. You can’t just say something and make it fact like in the days of Spacemen Magazine and Famous Monsters of FIlmland.

I did hear recently, though, that Legendary has filmed two endings to that new Godzilla vs. Kong picture they have coming out, and that’s a PHASR exclusive scoop!