Extreme horror is usually the place you go when you want to see something brutal and off-the-wall. Grotesque, however, also made me reflect on the dark subgenre as a whole 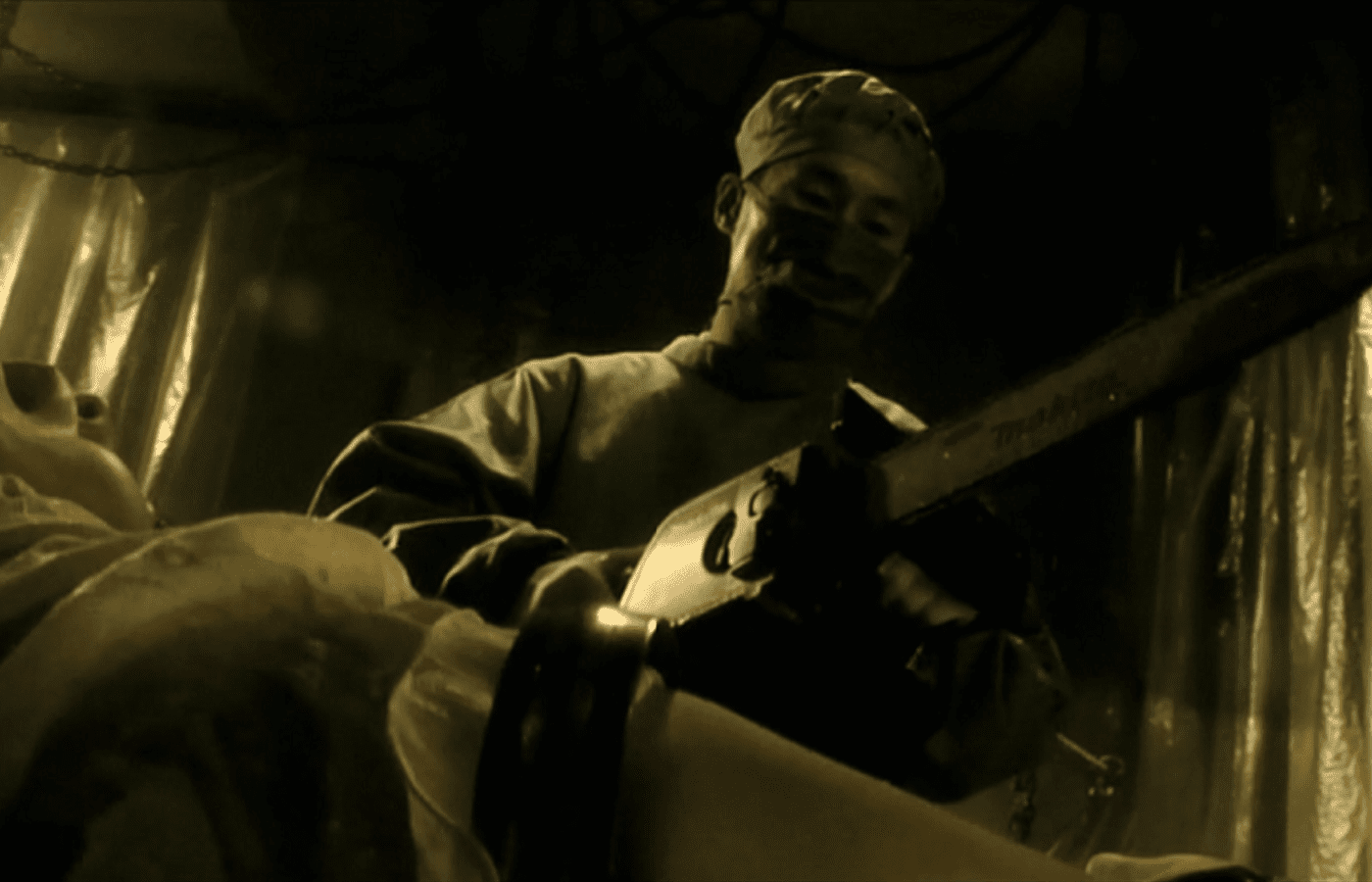 Extreme horror is usually the place you go when you want to see something brutal and off-the-wall. Grotesque, however, made me reflect on the dark subgenre as a whole…

Kōji Shiraishi’s Grotesque is a movie that has generated a lot of controversy over the years. Banned on release in the UK, it still has not been granted a certificate there to this day. Controversies like this fueled its appeal to the type of viewers that watch extreme horror anyway, which has led to it being considered one of the most depraved films of the last couple of decades. However, when I finally sat down and watched it, it struck me as something much different than your average extreme endurance test.

The plot of Grotesque is as simple as possible. A couple, Aki (Tsugumi Nagasawa) and Kazuo (Hiroaki Kawatsure), are on a date when they are attacked and kidnapped by the Doctor (Shigeo Osako). We spend less than three minutes before they are bludgeoned and hauled away, which lets most of the plot happen in one location. This narrative structure is interesting because we don’t know anything about these two main characters before they are subjected to their captor’s whims.

However, there was a single moment that switched the way I viewed the film completely. A couple lines of dialogue, actually. Right before the film shifts into high gear and the torture begins in earnest, the doctor tells the two leads the following:

“What I want from you is excitement. If you’re able to excite me with your wills to live, then I’ll let you go.”

This dialogue struck me as odd on first viewing. Generally, the torturer in these scenes will give no hope, so that the hope is only internal to the characters and the viewer. Here, the doctor lays out the general flow for how these movies work. If the characters can show that they DESERVE to live, he will allow them to leave.

Now at first blush, it doesn’t feel very meta, but with the general flow and constraints of the film’s genre, it feels very forward. In a way, the Doctor is aligning his concerns and desires with that of the viewer. This immediately made me even more uneasy, as it calls into question the very same impulse that usually has people firing up one of these movies to begin with.

Directly addressing the viewer like this isn’t too uncommon in art films, but it is pretty rare in these kinds of horror films. Art films will frequently call into question the viewer’s role, but to have it done so blatantly in what seems at first to be just a torture film is shocking. It almost makes it feel like the lens is pointed back at you, judging your motivations for watching the movie in the first place. I couldn’t shake this feeling at all, especially once Shiraishi starts calling more attention to the form and function of the film.

After that odd moment, he immediately follows it up with:

This statement is a direct call to a change in the action, the switch to violence that the viewer had been expecting. To have such explicit language that calls into focus the film’s structure and intent, it almost feels at times like the Doctor is speaking directly to the viewer. He’s here for the same reason and follows the same beats and motivations that we have while watching.

He later on signals a shift in the action again, after sexually assaulting the couple, by saying:

“This is where the real pain begins. Try to excite me.”

Before I move on, I also want to briefly touch on the voyeurism that’s called out throughout Grotesque. Watching a film is an inherently voyeuristic act; we watch a window into someone else’s life. That’s just the nature of watching. The Doctor repeatedly ensures that someone is watching, always telling one member of the couple to not break eye contact or keep their eyes on certain parts of their body. This direction pushes it further into meta territory since we’ve already discussed how the Doctor can align with the viewer. He dares us to watch and makes sure we never take our eyes off what’s unfolding on screen.

Escape, Revenge, Or Something Else?

After a lot of really painful-looking SFX, the Doctor finally reaches his desired excitement after Kazuo refuses to stop being tortured so that Aki won’t have to face the pain. The Doctor repeatedly tries to get him to submit, even going as far as to castrate him. After this, the Doctor announces he has reached his goal and will now nurse them back to health and turn himself in. This happens around where the viewer is reaching their limit as well, and once again calls the tropes and story structure out directly.

The Doctor takes them to a room that looks like a hospital and nurses them back to health. Of course, we know this can’t last forever. Right before freeing them, the Doctor drugs them and takes them back down to the basement. He loves the excitement so much he needs more. The convalescent scene had disrupted the flow for the viewer, with an abrupt shift to kindness, so we have to enter the dungeon one more time to truly be free.

The Doctor devises a game. He attaches one end of Kazuo’s intestines to a hook and tells him if he can make it to Aki and cut her bindings, he’ll free her. However, Kazuo has no possible way to survive this gambit. Kazuo manages, after much difficulty, to get over to Aki. However, the Doctor has been duplicitous and has run thick wire through Aki’s ropes, making cutting them impossible. Kazuo collapses, and Aki taunts the Doctor about something relatively benign (his smell). This strange insult throws the Doctor into a rage, and he cuts her head off with an ax.

What happens next completely defied belief when I first saw it. Aki’s head launches into the air and lands on the Doctor’s shoulder, biting his neck in the process. While this is happening, an almost dead Kazuo stabs him in the foot with the pair of scissors he would have used to free Aki. The Doctor collapses, and the couple dies facing each other and smiling. This sequence is entirely tonally inconsistent with the rest of the film, almost adding a degree of slapstick to the ending that neuters the doctor’s threat and gives the couple a “happy” ending.

The Ending We Deserve

To say that this ending spits in the face of Grotesque’s style is an understatement. This strange conclusion seems more fitting in a good old-fashioned splatter film, like Evil Dead 2 than a super-serious extreme horror film. You can almost hear Shiraishi laughing in the background as he gets to inject some truly dark comedy and a slightly romantic end for his leads. It removes the wind from the film’s nihilistic sails, showing the couple’s triumph over the self-serious machinations of The Doctor.

Another odd touch is that after this, the Doctor almost thanks the couple by giving them a proper burial in the woods. They’ve done what they were expected to by both the audience and The Doctor, and as such, deserve our admiration. This burial is followed by the Doctor following his next victim, albeit limping and slathered in cologne now. Aki and Kazuo’s impact will never leave him, just like it won’t for the viewer. After all, the film has already let us know that the Doctor is a reflection of our darker cinematic urges.