Licorice Pizza Review (2021): The Complications of Falling in Love 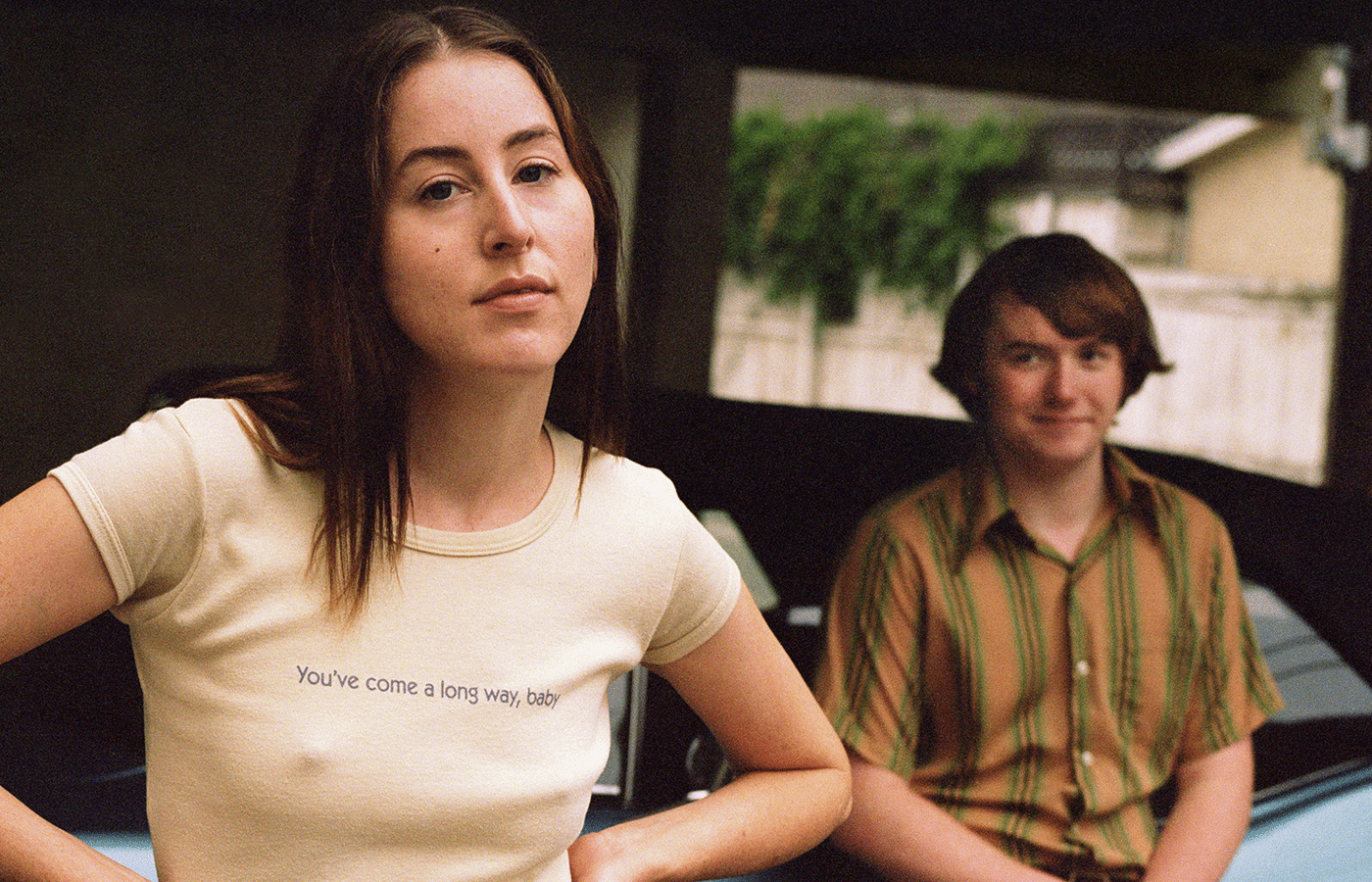 Saying that auteur Paul Thomas Anderson has a way with writing characters is nothing that hasn’t been said before. Anderson’s filmography follows troubled individuals and the plots often result in a clouded journey of morality. This observation is not a slight but after familiarizing myself with his work over the years – I was tense to see his latest feature. Marketed as a candid romantic-comedy, I was waiting for Licorice Pizza’s spiral.

Residing in the theater with only a stranger multiple rows away on a Winter evening, the room fell dark as the picture began. I was uneasy in the first act as I waited for it to go South like so many of the director’s other films. Thirty-minutes in and the feeling of dread gradually subsided and was replaced with something heartwarming. What I feared was a film with hidden agendas and what I got was what I was hoping for, a coming of age story about falling in love.

Anderson’s latest film, however, results in a grayscale of right and wrong but in one of the most charming of ways. Not so much a battle of ethics, but a battle of what it means to grow up and the ways we hurt those around us during that process. Licorice Pizza paints a rose-tinted portrait of growing up in the Valley during the 70s (something director Paul Thomas Anderson himself is very familiar with). Rather than large set pieces of iconic LA locations and multiple attempts at Hollywood actor look-alikes that have long since passed, we’re given something much more personal.

RELATED: 2022 Oscar Nominations, Everything You Need To Know

What is Licorice Pizza About?

Licorice Pizza introduces us to Alana Kane (Alana Haim) as she becomes entangled in the personality of Gary Valentine (Cooper Hoffman). Alana is a twenty-five-year-old assistant to a school photographer who is still reckoning with what it means to grow up. Gary is a fifteen-year-old child actor who is smitten by Alana. While falling for Alana, he’s trying to make a name for himself or at least a quick buck where he can. He invites her into his life with swagger and ease, and she begrudgingly accepts.

The two spend the film running across the San Fernando Valley, as they’re going through the treacherous navigation of first love. Alana Kane, played by musician Alana Haim – a long-time collaborator of director Paul Thomas Anderson is striking in her feature debut. Haim’s charisma and take-no-shit performance propels the film and ensnares the audience on introduction. Haim’s candid humanity is on full display with Licorice Pizza.

Haim’s co-star Cooper Hoffman, son of Paul Thomas Anderson’s long-time collaborator Philip Seymour Hoffman, also makes his feature debut as Gary. Hoffman, in so many frames, reflects his Father’s performances while carving out a space for himself. On first appearance, his character Gary looks like an awkward teenager, but Hoffman’s performance gives us something otherwise. What we see from him feels like an actor who is in control. I could watch them as Alana and Gary as they insult one another, quietly stare at each other fondly, and sprint across the Valley longingly for hours.

Haim and Hoffman play so naturally off of one another that you’ll nearly forget that you’re watching freshman actors. Aside from our protagonists, Licorice Pizza features a star-studded ensemble that includes Sean Penn, Tom Waits, Bradley Cooper, Benny Safdie, and even a couple of cameos from John C. Reilly and George DiCaprio (Leonardo DiCaprio’s Father). All of which brings our adventure with Alana and Gary to unexpected and hilarious territory.

READ: Hags Of Horror – The 13 Creepiest Old Ladies In Film

It’s worth noting the initial inspiration for the film came from three sources. The first being a funny moment where Paul Thomas Anderson witnessed an underage kid flirting with a twenty-something-year-old woman nearly ten years before the script was ever written. The second is the character of Gary who is inspired by Gary Goetzman, Tom Hanks’ producing partner. And the third, which is the Southern California record store chain where the film derives its intriguing title.

Whether it be the stellar costume design by Mark Bridges, the warm spectrum of colors displayed across the California suburbs, or the rich 70s soundtrack that you only want to play back as soon as it’s finished. The inspiration the film takes of the era never grows cumbersome. As mentioned prior, the most exceptional thing about Licorice Pizza is its characters. While some see the film as a meandering coming-of-age film without a through-line, what carries the audience along is Alana and Gary’s ongoing flirtatious game of cat and mouse.

Alana is still finding her place in the world. Whether it be going into business with Gary, trying to find a guy that her Father would approve of, volunteering for a mayoral campaign, or shooting her shot at becoming an actor herself. She rejects Gary because she knows she should be with someone her age. She consistently gives him mixed signals in hopes of him moving on, even though there is an underlying affection she has for him. This culminates in a sincere moment where Alana asks her friend if they find it weird that she hangs out with Gary and his friends, to which they respond “it is what you make of it”.

Gary’s infatuation with Alana is clear from the beginning. When she turns him down after a fight, he moves on to taking out someone of his own age and Alana looks for someone who would adequately suit her but they continuously come back together despite their push and pull behavior.

When you’re young, love feels like this ambient goal that signifies adulthood. No one tells you how complicated love can be. Alana and Gary are both growing up but in different periods of adolescents as they haphazardly stumble through their feelings. Alana is rejecting her youth while looking to settle for something serious because that’s what is expected of her and Gary acts as a constant reminder of youth in a way. Hence their push and pull relationship.

Gary had to grow up quickly being a child star, but it’s just that which gave him his maturity and confidence to ask out Alana, go into business, and screw over a coked-up Jon Peters. Gary isn’t without his flaws as he flirts with girls in front of Alana, repeatedly asks to see her breasts, almost gropes her as she’s passed out, and smashes Jon Peter’s sports car before immediately running out of gas for their getaway truck.

Alana Haim and Cooper Hoffman are cast perfectly for their roles. They look like normal people, imperfections and all. It’s these physical and emotional imperfections in their character’s which drive the narrative home. Rather than spanning shots of LA, we get personal portraits of our young cast. We get a transparent look at youth and the mistakes we all make along the way.

Licorice Pizza will make stars out of Alana Haim and Cooper Hoffman, I guarantee it. Paul Thomas Anderson masterfully uses his entire skill set as a director to enrapture the audience in every scene without it ever becoming overwhelming. Licorice Pizza is perhaps the most Oscar-worthy film of 2021 that your friends have never seen. Do you know what good friends do? Take hesitant friends to good movies and let them thank you for it later.

Much like the sprawling suburbs of the Valley, the plot follows similarly. It’s a winding and gentle ride you don’t mind taking your time through because it feels familiar in the best of ways. Licorice Pizza is a candid and authentic reflection of youth, the complications of falling in love, and the stupid minor mistakes that make us human.

Have You Seen Licorice Pizza?

We hope you enjoyed our Licorice Pizza review! Have you seen this film? What did you think? Let us know on social media!