It was out of the TVA frying pan and into the intergalactic fire for our titular character this week in the third installment of the Disney+ streaming series Loki. 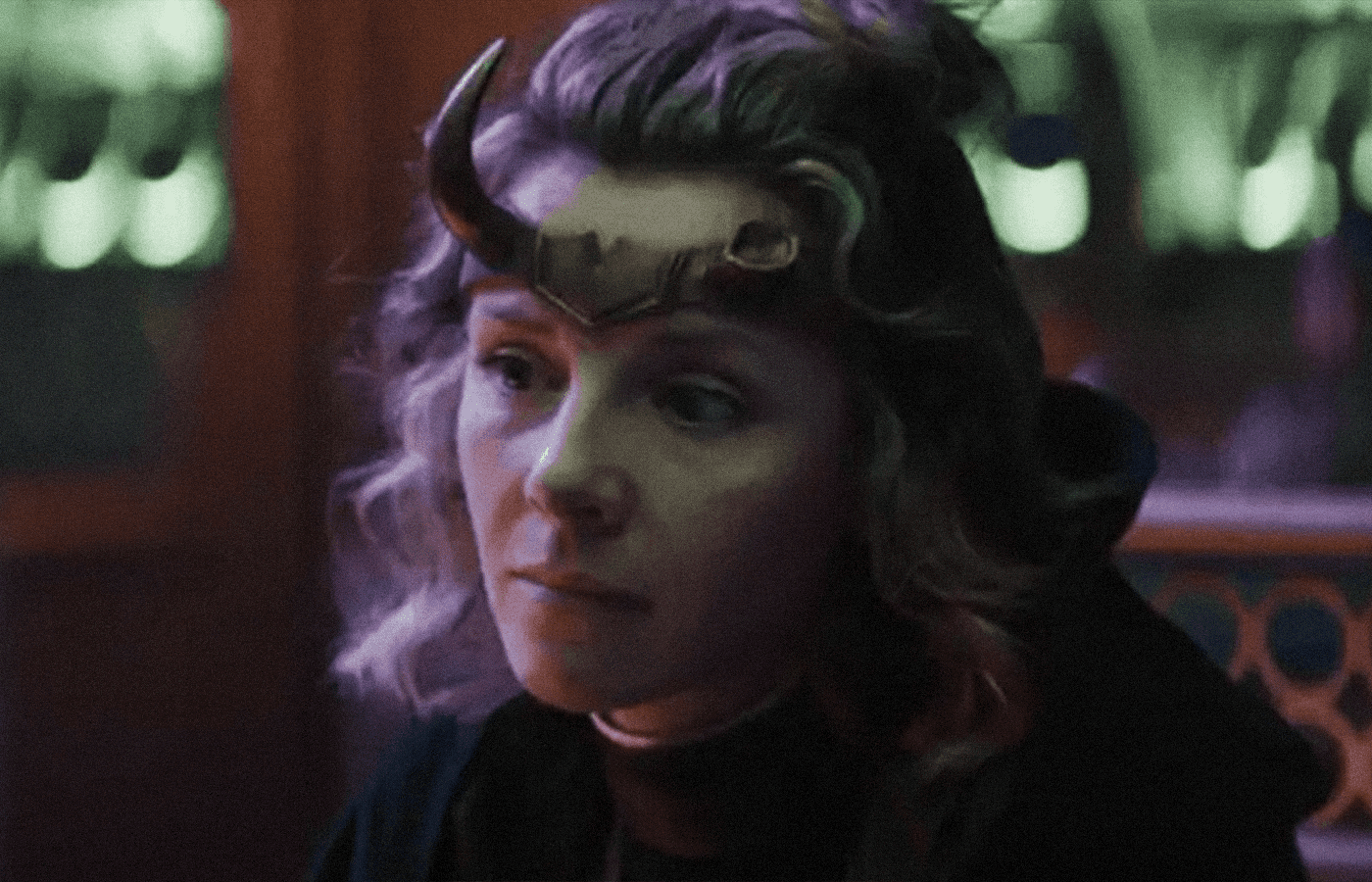 It was out of the TVA frying pan and into the intergalactic fire for our titular character this week in the third installment of the Disney+ streaming series Loki. Getting away from the orderly Time Variance Authority, Loki (Tom Hiddleston) spends some time in Lamentis I, just before an apocalyptic planetary collision, and gets to know the other variant (Sophia Di Martino) a little bit better.

Make sure your TemPads are in working order, folks, because we’re about to dive into Loki: “Lamentis.”

Last week’s episode concluded with Loki – pursued by Agent Mobius (Owen Wilson) and some of the Watchmen – blindly following the mysterious variant through a time portal. In this episode, we discover just where this portal would take him. As the Marvel opener played, I eagerly shouted out my predictions of where they would land. Imagine my (and, I assume, Loki’s) surprise when it turns out he followed the variant right back to the TVA headquarters!

Loki retrieves his daggers from where they were locked away, and the two squabble a bit through the TVA’s hallways. It turns out that the variant learned from one of the TVA agents she enchanted that the Time Keepers can be found at the very top of a golden elevator (this seems almost too obvious, no?).

Anyway, when Ravonna Renslayer (Gugu Mbatha-Raw) appears, flanked by some imposing-looking TVA agents, Loki swipes the TemPad (a TVA tool used to create time portals) from the variant and uses it to transport them to safety. Well, not really safety. They land in the sandy terrain of Lamentis I, a moon of Lamentis, a planet at the very edge of Kree space that first appeared in the comics in 2007’s Annihilation: Conquest – Prologue.

The bulk of this episode centers on Loki and the variant as they try to escape the coming apocalypse on Lamentis I. Initially, the problem is that the TemPad has run out of power, but, after Loki gets drunk (or “full,” to borrow the mischievous god’s term) and is thrown off of the train, the challenge escalates: the TemPad appears to be broken beyond repair.

From there, the two decide to instead escape by hijacking a space shuttle. Unfortunately for this duo, however, they are unable to make it in time. They fight their way through a small neon city, but just as they are about to near the shuttle, they watch in defeat as their last chance out of the coming apocalypse gets hit by a meteor before taking off.

Loki learns this week that the variant’s name is Sylvie, and it appears that one of my predictions from last week seems to have been kind of correct. I say “kind of” because she doesn’t appear to be the same Sylvie that appears in the comics – she’s not the confused and misled creation of Lady Loki. In fact, it seems as though she has a lot of agency. Right now, I’d describe Sylvie as a sort of combination of Sylvie (her name and look), Amora, the Enchantress (her powers), and Lady Loki (we learn this episode that she is a Loki variant, no matter how much she detests being referred to as a Loki).

That all being said, Sylvie is a very different Loki variant from the Loki we know. For example, she tells Loki that she knew all along that she was adopted and that she taught herself magic. This is a major departure from Loki, who learned magic from Frigga and whose adoption was hidden from him for most of his life. If the two are merely variants of each other, wouldn’t they share some -or maybe even most- of the same memories at least up until whatever nexus event caused their paths to separate? Methinks a multiverse might be a more likely explanation here, rather than a Sacred Timeline…

Sylvie also divulges to Loki that the people who work at the TVA weren’t all created by the Time-Keepers. Rather, she claims that they are all variants, removed from their timelines and now working for the TVA. This is quite a different explanation from the one provided to Loki by both Miss Minutes (Tara Strong) and Mobius, who alleged that the Time-Keepers created them in all their infinite wisdom. Either Mobius truly didn’t know that he was a variant or he has been lying to the patron god of lies and mischief.

At the center of this episode is a personal, often pithy, and sometimes overly abstract conversation between Loki and Sylvie after they sneak onto the Lamentis train. This is where they trade backstories and engage in a conversation about love. Unfortunately, this love conversation was so shallow and seemingly out of nowhere that I was waiting for a punchline. It turned out, however, that this discussion was meant to be taken seriously, and a punchline never appeared. Additionally, Loki sharing his memories of his mother so casually felt very bizarrely hollow in comparison to his earlier conversations about his family with Mobius or his confrontation with the TVA recordings of his past and future.

One bright and shining moment of this conversation, however, was the reveal that Loki is bisexual! This aspect of Loki’s character was something that Loki director Kate Herron was very passionate about including in the series. On Wednesday, June 23rd, Herron tweeted, “…it was very important to me, and my goal, to acknowledge Loki was bisexual. It is a part of who he is and who I am too. I know this is a small step but I’m happy, and heart is so full, to say that this is now canon.”

While Loki’s bisexuality has already been established in the comics (I’m specifically thinking of Loki’s claim that Asgardian culture doesn’t ascribe to Midgardian understandings of sexual identity in Young Avengers #15), this is an exciting and welcome reveal! And, as many fans have noted on social media, the gorgeous bisexual lighting of the final half of this episode felt like a real celebration.

…and it’s because Loki was acting a bit out of character this episode. That’s not to say that he isn’t generally erratic, but he was suddenly very willing to casually divulge information about his past to this variant he just met and carelessly destroy the TemPad, his ticket to surviving a major apocalypse. Loki is a lot of things, but he’s usually not this trusting and he has a surprisingly good survival instinct for someone who has lost (and even died) so many times.

In the very opening scene of this episode, we see Sylvie sporting a very fashionable green tie-dye tee-shirt, indulging in margaritas with an equally casually dressed Hunter C-20 (Sasha Lane), the TVA agent who Sylvie had previously kidnapped in order to learn the location of the Time-Keepers. Sylvie pushes Hunter C-20 to provide this information by repeatedly sliding these questions into otherwise casual and friendly conversation, all while posing as a long-time friend. Eventually, the audience is shown that this scene is what is happening inside of the TVA agent’s mind while Sylvie is enchanting her.

For all of these reasons, I’m led to wonder: Is the bulk of this episode secretly some sort of enchantment scenario happening inside of Loki’s mind? Because he’s away from the TVA, Loki regains his powers (and it’s a lot of fun watching him shape-shift and cast fireworks out of the palm of his hand), but the extent of his powers in this episode don’t always seem real. For example, who knew that Loki could stop a gigantic building mid-fall and push it back up?

I think that there’s a good chance that Sylvie was actually able to successfully enchant Loki when she tries to do so after they first land on Lamentus I. The episode makes it seem like she fails, but perhaps that is all part of the enchantment and we’re seeing things from Loki’s perspective. This would explain why Loki is so strangely willing to share information about his past, whereas Sylvie keeps her cards closer to her chest.

During the conversation on the train, a waitress with black chin-lengthed hair and dressed in a green uniform with gold buttons (a very Loki-appropriate look) arrives with two green glasses of champagne for the table. Sylvie declines her drink, so Loki takes both for himself. Later in the conversation, there is a sudden cut. Despite her claims that she wouldn’t be able to fall asleep on the train next to someone she doesn’t trust, Sylvie does, in fact, fall asleep. When she wakes up, she finds a very drunk Loki, openly wearing his TVA uniform and serenading the train’s passengers with a classic Asgardian tune.

I wonder if Sylvie falling asleep signals something important. If this is, in fact, all taking place in Loki’s mind as Sylvie enchants him, maybe her falling asleep is a sign of a change in power, or at least of some sort of internal struggle. Following this moment, Loki starts sliding questions into their conversations. This is where Sylvie is suddenly comfortable sharing details about her methods of enchantment, despite her previous refusal to do so. In discussing her methods, she also reveals the fact that the TVA agents are variants, just like Loki and herself.

I very likely might be reading into this too much (I’m feeling a bit like that Charlie Kelly meme), but I’d bet on the Sacred Timeline that something fishy is happening here. Sylvie falling asleep seems like an important moment that this episode sweeps past. On the other hand, the photographs of Sylvie and Loki that appear on TVA desks in the end-credits suggest that this is all really happening (and that the TVA located their whereabouts with impressive speed). Hopefully, we’ll learn a bit more about what’s going on here next episode.

We hope you enjoyed our Loki episode 3 review. Loki can be watched every Wednesday on Disney+.