In Episode four of Loki the Time-Keepers were revealed, multiple characters were pruned, and more Lokis entered the playing field! 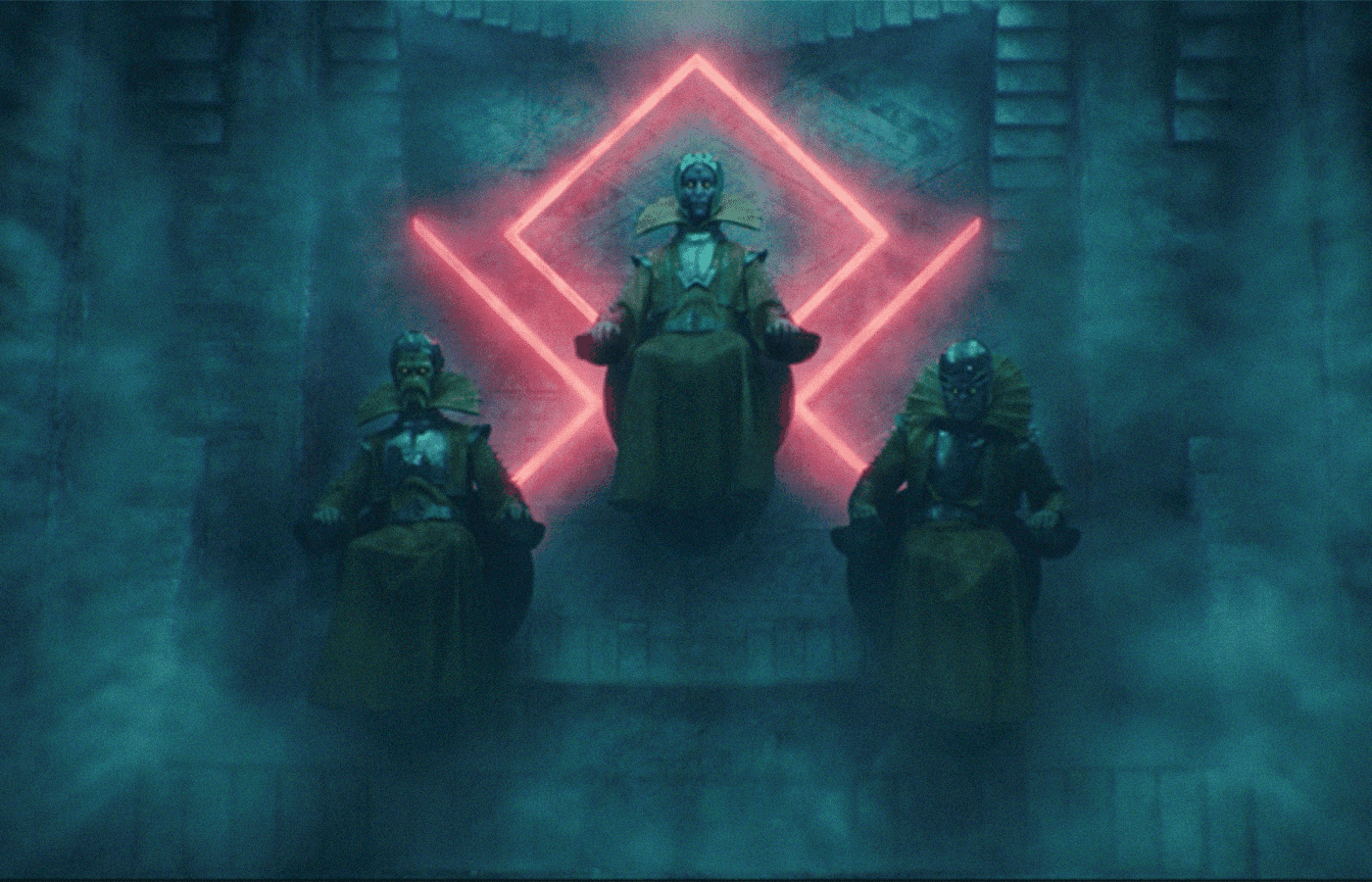 A lot happened during this week’s installment of the Disney+ streaming series Loki. The Time-Keepers were revealed, multiple characters were pruned, and more Lokis entered the playing field! Oh, and, according to Mobius (Owen Wilson), Loki (Tom Hiddleston) has a girlfriend.

Now, follow me through this mysterious portal so we can discuss Loki: “The Nexus Event.”

When we last left Loki and Sylvie (Sophia Di Martino), they were stuck on Lamentis I during an apocalyptic event with all chances of escape exhausted. “The Nexus Event” picks up there, with Loki and Sylvie sitting and waiting for their coming destruction. It’s not all doom and gloom however, as the two start to have some feelings for one another and -get this – they even hold hands. Yea, I’d say it’s pretty serious.

All soft and fluffy feelings aside, whatever was sparked between these two causes a major nexus event to happen despite the fact that they’re sat in the midst of an apocalypse. As a result, Mobius and the other TVA agents are able to locate the two and bring them back to the TVA’s headquarters as prisoners.

By the way – is anyone else shocked that everything we saw in Episode 3 was real and not just one of Sylvie’s enchantments? In my coverage of last week’s Loki episode, I posited that much of what we saw on Lamentis I might have been Sylvie enchanting Loki, Loki enchanting Sylvie, or a mix of the two. Now that we know that I was wrong (gasp!) and that everything was saw last week was real, it makes Episode 3 seem even more strange to me.

I guess all of the weirdness (Sylvie falling asleep, Loki and Sylvie trusting each other really quickly and sharing secrets with each other, etc.) was just to set up the fact that the two like each other… and by that I mean that they like-like each other. Since they only have six episodes to tell this story, I suppose the writers did have to speed up this relationship a bit. Still, I wish it didn’t have to come at the cost of more nuanced writing.

Anyway, once Loki and Sylvie are brought back to the TVA and collared, they’re separated and questioned. Loki initially refuses to tell Mobius what caused the nexus event that allowed the TVA to find them, but after spending some time in a TVA torture device (a time-loop where Loki has to repeatedly relive a particularly painful interaction with Sif (Jaimie Alexander), Loki seems more willing to talk.

Mobius tries out one of Loki’s methods and lies to the God of Mischief, telling him that Sylvie has been erased. Based on Loki’s teary-eyed angry reaction, Mobius determines that Sylvie and Loki have formed some sort of romantic attachment and that it was this feeling that caused the nexus event to occur. Mobius also takes some time to tell Loki just how narcissistic it is to fall in love with another Loki. Thank you, Mobius, we were all thinking it.

Before I continue on, I wanted first to talk a bit more about the memory of Sif that the TVA uses to torture Loki. Basically, Sif tells Loki that he will always be alone before beating him up in retaliation for cutting her hair as a prank. This memory comes from Norse mythology and appears in some of the comments.

For example, in Roberto Aguirre Sacasa‘s Loki Vol.2 #1 (2010) Loki cuts off all of Sif’s hair in an attempt to pull a prank on the woman whose “heart is bound” to Thor’s. Loki’s action is at least partly a result of his jealousy over brother’s happiness and love. Pulling from this story makes a bit of sense here, given the memory’s focus on Loki’s loneliness, as well as the fact that Loki is contending with his genuine feelings for Sylvie during this episode.

Although Mobius has quickly learned to not trust everything Loki says, something about Loki’s claim that Mobius – and all of the other TVA employees – are actually variants rather than creations of the Time-Keepers gives Mobius pause. In fact, after visiting Ravonna Renslayer’s (Gugu Mbatha-Raw) office to quietly celebrate closing the Loki variant case, Mobius swipes Ravonna’s TemPad and uses it to access video evidence that Loki was telling the truth. Mobius rescues Loki from the time-loop prison, but just as they both return to TVA headquarters, Ravonna, flanked by a number of TVA guards, stop them and “prune” Mobius into oblivion.

Earlier in the episode, we learn through a flashback that Sylvie was first arrested in Asgard by the TVA when Sylvie was just a child and Ravonna was a Minuteman. We also see her entrance into the TVA, a series of moments that parallel Loki’s initial arrest in Episode 1. The major difference, however, is that Sylvie escapes. The child-Sylvie (Cailey Fleming) steals Ravonna’s TemPad and escapes through a portal. As Sylvie tells Loki, she grew up hiding in apocalypses – a truly grim way to live!

Pay No Attention to That Android Behind the Curtain

Eventually, Sylvie and Loki are brought by Ravonna before the Time-Keepers. All hope seems lost until Hunter B-15 (Wunmi Mosaku) appears. Earlier in the episode, Sylvie used her enchantment power to help Hunter B-15 to access her memories from before her time at the TVA. As a result, Hunter B-15 is not very happy with the Time-Keepers.

When she arrives on the scene, she tosses Sylvie her sword, is knocked out by a nearby TVA guard, and a battle commences! After Sylvie and Loki take down all of the guards and Ravonna, Sylvie throws her sword at the central Time-Keeper, causing his head to pop off. In a very Wizard of Oz-esque moment, the two variants discover that the Time-Keepers are not all-powerful “sky lizards,” but are actually a collection of harmless androids.

Loki decides to take this moment to finally tell Sylvie about his feelings for her. Maybe if Loki watched more horror movies he’d know that this isn’t a good idea. Yeah, Ravonna appears to be unconscious on the ground but, come on, Loki, you should have know she would pop up eventually. So, just as Loki is about to profess his feelings to Sylvie, Ravonna suddenly stands up and prunes him! Loki – our main character – is pruned! Alas! How could this be?!

True Deceivers, fear not! In a mid-credits scene (the first of the series), we see Loki waking up, wondering if he is in Hel. It turns out that he’s not in Hel, but rather is in some sort of Loki-verse (perhaps a way to prepare MCU fans for the coming live-action Spider-verse?). The background of the shot looks a lot like Manhattan. And there’s a destroyed building that bears a striking resemblance to the Avengers headquarters.

We’re also treated in this moment to four Lokis. Two of these Lokis – Kid Loki (Jack Veal) and Classic Loki (Richard E. Grant) come straight from the comics. But the other two – Boastful Loki (Deobia Oparei) and Alligator Loki – are entirely new. I love the idea of bringing in this classic Loki, donning the very retro-looking original Loki costume. And having an Alligator Loki is very fun, especially since we have Frog Thor in the comics. You know what I’d also really enjoy? A scene of Mobius waking up in a Mobius-verse.

Anyway, Boastful Loki is carrying some sort of hammer – not Mjolnir, but perhaps some sort of DIY-Mjolnir. This would tie into Loki’s earlier memory of Sif: in both the comics and in Norse mythology, in order to make up for cutting off Sif’s hair, Loki goes to the Sons of Ivaldi and asks them to make her new hair by spinning gold. In Aguirre Sacasa’s Loki run, the Ivaldi dwarves also made two extra gifts- a magic spear called Gungnir and an enchanted ship named Skidbladnir- to curry favor with the gods of Asgard.

Loki takes these items and goes to two other dwarves known for their smithery, Brokk and Eitri, and asks them to try and beat the craftsmanship of the Sons of Ivaldi. The two accept Loki’s challenge and create Mjolnir, what would eventually become Thor’s hammer. In Aguirre Sacasa’s Loki, however, the God of Mischief deeply relates to the hammer and its short, flawed handle. Because Loki see Mjolnir as a fellow runt, he takes the hammer for his own.

Unfortunately for Loki, things don’t always pan out the way he plans: the comic ends with Thor claiming Mjolnir and the gods of Asgard sewing Loki’s lips shut. Perhaps Boastful Loki somehow got a hold of the Mjolnir of his universe? Maybe this could be his nexus event? We shall see!

Loki can be watched every Wednesday on Disney+.

Did You Watch Loki Episode 4?

We hoped you enjoyed our Loki episode 4 review! What did you think of the episode? Let us know on social media!