The latest episode of Loki saw our titular mischievous scamp wake up in the Void after being "pruned." And what an episode it was... 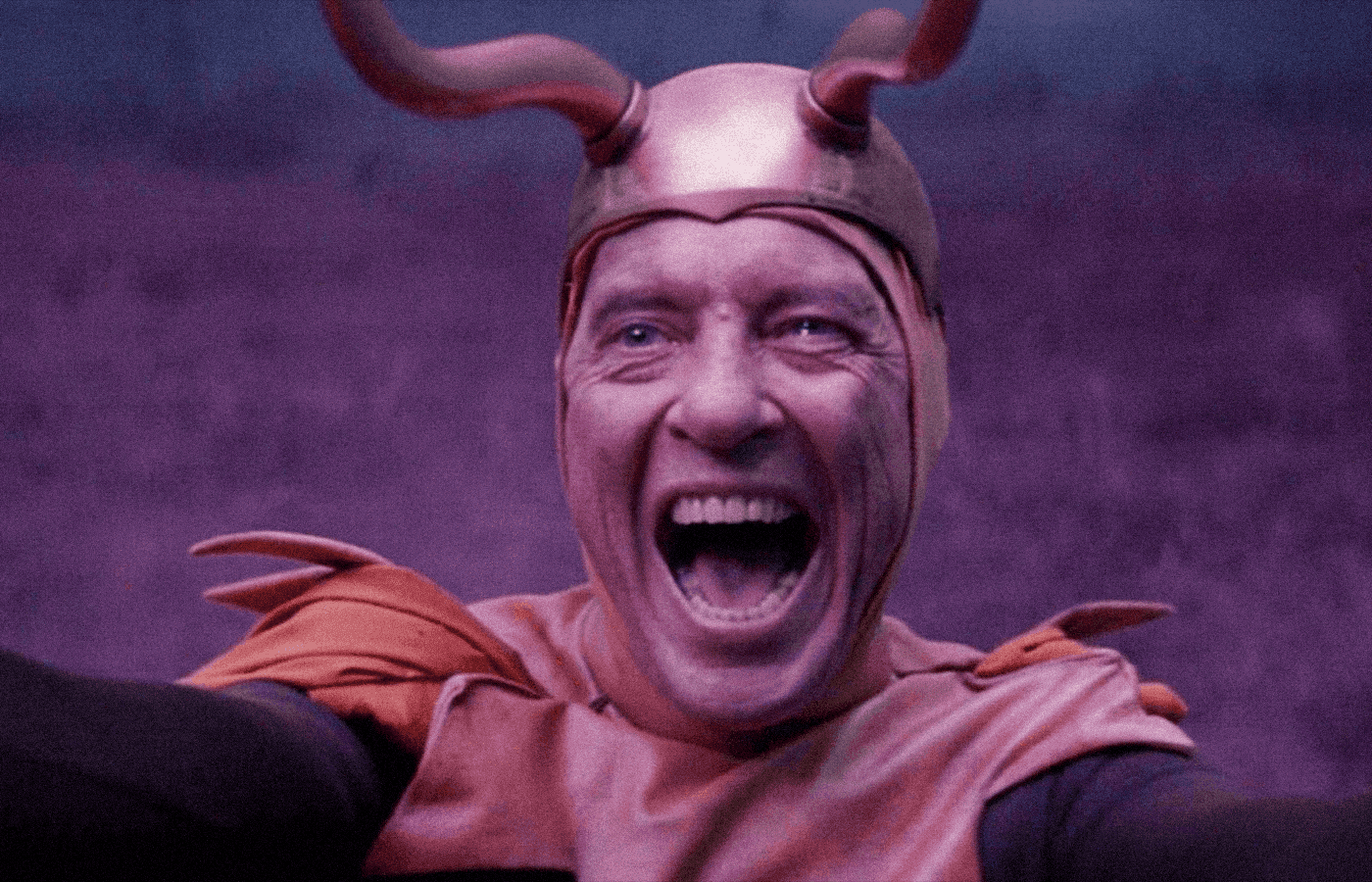 The latest episode of Loki saw our titular mischievous scamp wake up in the Void after being “pruned” (AKA: the Time Variance Authority erased him from the timeline). And what an episode it was, True Deceivers! There was a smoke monster (hello, my fellow Lost fans), an all-out Loki-on-Loki brawl, Alligator Loki stole all of our hearts (and hands), and Hunter B-15 (Wunmi Mosaku) is still alive!

Without further ado, let’s all prune ourselves so we can catch up with our old friend Loki (Tom Hiddleston) in the Void and discuss Loki: “Journey into Mystery.”

Before diving into the nitty-gritty of this week’s episode, I first wanted to talk a bit about its title: “Journey into Mystery.” Way back in August 1962, Marvel released a comic based on Norse mythology titled Journey into Mystery #83. Loki wouldn’t appear in this series until a few months later (in #85); however, in April 2011, a Loki-centered series was published under the same title, Journey into Mystery.

In the first issue of 2011’s Journey into Mystery, written by Kieron Gillen with art by Dougie Braithwaite, readers are introduced to Kid Loki as he meets the spirit of Classic Loki and works to uncover the answer to that age-old question: Why did Loki take his final stand against the Void?

So, beyond just being a fun reference to the very beginnings of Marvel’s coverage of Asgardian battles and politics, this title also connects to key characters and themes present in the episode.

Sylvie’s Escape Into the Void

Back in TVA headquarters, Sylvie (Sophia Di Martino) faces off against Judge Ravonna Renslayer (Gugu Mbatha-Raw). This scene is held in TVA’s courtroom, lending a nice bit of dramatic irony to the occasion, as this is the last place the two saw each other when Sylvie was just a child before she stole Renslayer’s TemPad and escaped into a portal.

Renslayer (with some help from Miss Minutes (voiced by Tara Strong)) divulges a pretty major secret to Sylvie: it turns out that, if you get pruned, you get sent to the Void: a place that’s located somewhere beyond time. Eager to learn more about the true powers behind the TVA and reunite with Loki, Sylvie prunes herself and wakes up in the Void.

It’s a desolate place that looks like windy dessert save for the fact that it’s bizarrely decorated with landmarks and structures from across time and space: throughout the episode we see a sphinx, destroyed skyscrapers, and marooned ships (of both the sea and space varieties).

Oh yea, there’s also a smoke dragon named Alioth that serves as a sort of prison guard, ensuring that no variant escapes from the Void by hungrily consuming anything that gets in its way. It also guards against whatever is beyond the Void, which Sylvie thinks might just be the future, and maybe even the true Time-Keepers.

Thankfully, when Sylvia arrives at the Void, she’s not alone for very long. A pizza delivery car pulls up and rescues her from the approaching Alioth. And who but Mobius (Owen Wilson) is in the driver’s seat?! Yes, he’s still alive too!

The Many Lokis and Frog Thor Explained

When Loki wakes up in the Void, he isn’t greeted by Mobius, but is instead surrounded by the four Lokis we saw in last episode’s post-credit scene: Kid Loki (Jack Veal), Classic Loki (the incomparable Richard E. Grant), Boastful Loki (Deobia Oparei) and Alligator Loki. These four Lokis catch our Loki up to speed and warn him to not mess with Alioth.

They bring Loki to their hide-out and swap stories and lies about their past histories. Alligator Loki apparently ate the wrong neighbor’s cat. Kid Loki, who is treated as a king by the other Lokis, claims that his nexus event was when he murdered Thor.

Speaking of Thor, at one point, the camera pans down across the layers of dirt and detritus that fill the space between the hatch-door and the Lokis’ secret lair. This is a really fun moment, as the camera captures both Mjolnir and a frog Thor trapped in a jar buried in the dirt.

A bit on this frog Thor – this could be Throg, a Thor frog variant who recently appeared in the 2009 comic series Lockjaw and the Pet Avengers when Thor assumed the body of a frog (as you’ve probably already guessed, the mischievous Loki was majorly involved in Thor’s froggy transformation).

Despite his small stature, Throg is still able to wield Mjolnir, which could be why the mighty hammer is so close to the glass jar in which this frog Thor is trapped. Another possibility is that this frog Thor is Simon Walterson, AKA: Puddlegulp, a former-football-player-turned-hero-frog who also appears in Lockjaw and the Pet Avengers. and wields a broken piece of Mjolnir.

Anyway, after the Lokis spend some time chatting, our Loki gets up and leaves, planning to find a way out of the Void. On his way out, he is stopped when President Loki (also played by Tom Hiddleston) and his militia of Loki variants show up to do some Loki-on-Loki battle.

This was a super-fun scene, especially since we’re able to see some Loki powers in action. I’m especially thinking of Classic Loki’s ability to project a holographic version of himself elsewhere, allowing him (as well as Loki, Kid Loki, Boastful Loki, and Alligator Loki) to escape from the fight completely undetected.

That being said, I’m a little let down that this is seemingly all that President Loki is going to be used for! He first appeared in Marvel Canon, by the way, in the series Vote Loki (2016), which came right around the time that America was dealing with its own terrifying election.

In the short time that President Loki is on screen, he’s magnificent: he’s haughty and downright shocked to discover that his army of Lokis have turned against him. And, of course, his reaction to Alligator Loki biting off his hand is wonderfully fun.

This episode includes an attempt to return to some of the themes and questions that were initially brought up in the first two episodes: Can you become something other than what people think or expect of you? Loki’s and Sylvie’s shared loneliness is also briefly explored during their pre-battle tête-à-tête and Classic Loki’s backstory emphasizes the TVA’s refusal to allow Loki any other role than the friendless and jealous villain.

According to Classic Loki, after discovering that pain followed him wherever he went, he isolated himself on a distant planet, away from Thor and his family. He eventually missed his brother enough that he decided to return to Asgard. Once he put this plan in motion, however, the TVA deemed Classic Loki a variant and pruned him, sending him to the Void.

After Sylvie and Mobius reunite with Loki and are introduced to his “friends,” the four Loki variants, they begin to concoct a plan. Sylvie quickly discovered the possibility that she could enchant Alioth, which would allow the team to potentially extract information regarding the true identity of the Time-Keepers and break out of the Void and into whatever lies beyond it. Mobius, however, decides to return to TVA headquarters using the TemPad Sylvie stole from Renslayer. He promises to “burn it to the ground.” Hell yeah, Mobius!

Sylvie and Loki face off against Alioth. At first, the plan is for Loki to distract Alioth using a flaming sword gifted to him by Kid Loki while Sylvie attempts to enchant the smokey dragon. Unfortunately, this doesn’t work very well. Thankfully, Lokis can be very good at improvising.

Classic Loki comes to their rescue and, using his surprisingly powerful magic, projects an illusion of Asgard to successfully distract Alioth and sacrifice himself. This moment is pretty touching, particularly after the backstory Classic Loki shared. Even after all of his time stuck on a distant planet and then trapped in the Void, Asgard remained in Classic Loki’s memories well enough for him to recreate it.

Thanks to Classic Loki’s distraction, Sylvie and Loki have time to join hands and use both of their magicks to enchant Alioth. Loki is initially doubtful of this plan. He points out the fact that he doesn’t have enchantment powers, but Sylvie retorts that they are the same. Because of this, she reasons, anything she can do, he can too. Loki listens to Sylvie (and perhaps his earlier claim that “we’re stronger than we thought”) and the two successfully enchant Alioth. Sylvie tells Loki to open his eyes. When he does, he sees that the smoke has separated, revealing a distant dark castle.

What’s Beyond the Void?

…All that’s left now is the finale, which airs next week! I’m very excited about the battles we’re likely going to see. I’m also hoping for a Kang appearance. And – if I’m not being too greedy – a scene in which Mobius rides off on a jet-ski.

Loki can be watched every Wednesday on Disney+.

Did You Watch Loki Episode 5?

We hope you enjoyed our Loki Episode 5 review! Did you watch the episode? Let us know your thoughts on social media!