The Loki episode 6 does a fantastic job of setting up future MCU films and its own second season. We also get introduced to a mysterious and powerful character. 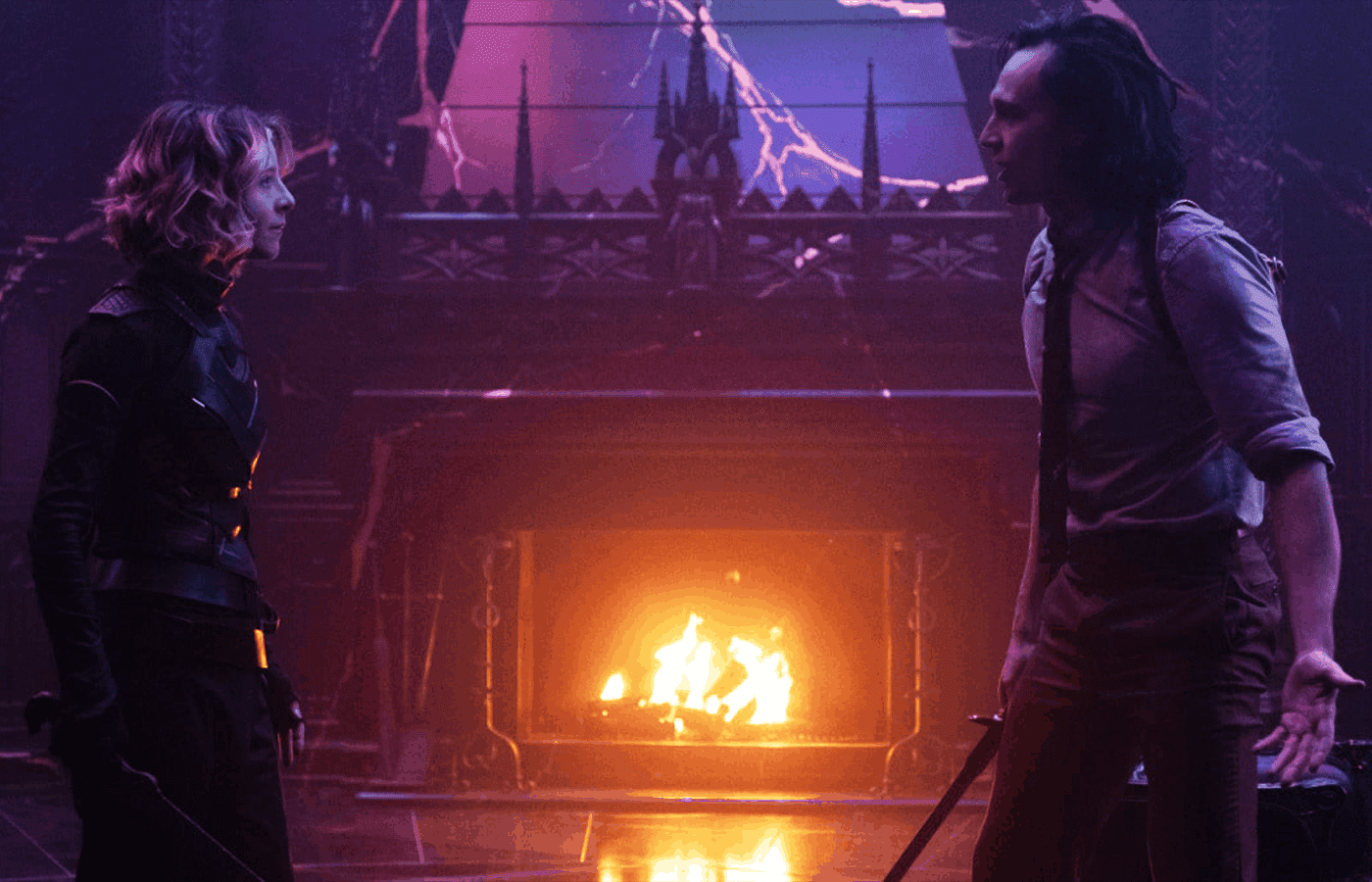 Well, we’ve reached the end of this first season of Loki. This finale does a lot of fantastic set-up work not only for season two, but also upcoming MCU films such as Spider-Man: No Way Home (2021), Doctor Strange in the Multiverse of Madness (2022), and Ant-Man and the Wasp: Quantumania (2023). Honestly, I wouldn’t be surprised if Loki is also setting up a future Avengers film… “The Avengers: Multiversal War” has a nice ring to it, don’t you think?

This review is part of a larger series. As Loki aired, I covered each episode one by one, discussed highlights, pointed out Easter eggs, and made predictions (some more accurate than others – I’m only a mortal from Midgard, after all).

So, let’s go into this creepy ominous castle that lies beyond the end of time and dive into Loki episode 6: “For All Time. Always.” Don’t worry about knocking the door down, it will ominously swing open in just a moment. All you have to do is step inside…

Introducing He Who Remains

Loki episode 6 sees Sylvie (Sophia Di Martino) and Loki (Tom Hiddleston) entering the castle that they discovered at the end of last episode after successfully teaming up and enchanting Alioth, the smoke dragon that serves as a guard-dog of The Void. Once inside, they are almost immediately confronted by Miss Minutes (voiced by Tara Strong) who offers them pretty much whatever they want – the Infinity Gauntlet, the destruction of Asgard, the throne… but Loki and Sylvie flatly refuse Miss Minutes’s overtures. Unfortunately, we never get to learn exactly how involved or sentient Miss Minutes is here, but it’s safe to say that she works for He Who Remains and not the TVA as it previously appeared.

The two continue to walk deeper into the sci-fi gothic castle, eventually meeting the man they’ve been searching for all this time, He Who Remains (Jonathan Majors). He tells the two that he was a scientist from the thirty-first century who discovered the multiverse and was able to meet and interact with other versions of himself from different timelines; however, his scientific breakthrough was something of a Pandora’s Box, and it eventually set off a multiversal war. In order to end the war, He Who Remains claims that he created and ruled over the TVA, pruning variants and protecting his timeline.

Jonathan Majors is an absolute joy to watch in this role. In fact, he plays it so well that it’s hard to root against him. Of course, it’s important for me to note here that He Who Remains is most definitely Kang (he is officially listed as playing “Kang the Conquerer” in Ant-Man and the Wasp: Quantumania). The episode’s work to set up Kang as a major MCU villain is perfectly executed. Majors’s Kang is playful, but with an unmistakably sinister edge. He controls all of time and views his work to defend his timeline with a sort of blithe “it’s only business” mentality.

Kang also demonstrates more subtle moments of cruelty, such as when he calls Sylvie “Loki” despite knowing how important it is to her to no longer be called by that name. This is also quite hypocritical given the fact that this Kang does not go by “Kang,” but by the more ominous “He Who Remains.” Perhaps his reasons for changing his name are similar to those of Sylvie, to highlight his difference from those Kangs he considers to be “devils.” And then, to discover that the dictatorial He Who Remains is the “good” Kang – and that there are many more that are far more evil? Yikes. I can’t wait to meet them!

Don’t Try to Trap a Loki

Unsurprisingly, Loki and Sylvie’s initial plan is to kill He Who Remains, but He has other plans. He tells them that they have a choice: either kill him and unleash a legion of different versions of him (many of whom, he warns, are devils), or assume his throne and defend the timeline together.

Loki, once more, flatly refuses the offer of a throne. It seems that the God of Mischief has really learned something from his time at the TVA and his quest through The Void, meeting various versions of himself who failed horribly as a result of their endless hunger for power. Unfortunately, it seems that He Who Remains designed this entire situation just for Loki and Sylvie to fail. As Loki eventually notes, he’s untrustworthy and Sylvie is unable to trust. When both Miss Minutes and He Who Remains repeatedly offer opportunities for power, it’s not surprising that Sylvie starts to become wary of Loki’s motives.

And that’s the rub, isn’t it? Throughout Loki, the comics, and the MCU, Loki is repeatedly found breaking out of any box that was built to contain him. But in this episode, it seems that Loki is unable to escape this personalized trap. And same with Sylvie.

Even when the two managed to achieve their freedom, escape the TVA, and even find friendship (and perhaps love), this was all the design of He Who Remains. He tells the two that he created the path, they simply followed it until it led them here. This reveal – that Loki and Sylvie have never been truly free to follow their own wills this entire time – is perhaps the worst thing for a Loki to discover.

Anyway, Sylvie is also committed to obtaining vengeance for everything that He Has Remains has done to her life. After all, it’s his fault that she was pruned and then forced to live her life hiding out in apocalypses to escape the TVA’s detection. Sylvie is therefore dead-set on killing He Who Remains and figuring out the rest later. When Loki urges her to take a moment and think before acting, she kisses him, then throws him into a portal that takes him to TVA headquarters.

After Loki is removed from the equation, Sylvie fatally stabs He Who Remains. In his final breath, He ominously promises to “see you soon.” And I’m sure we will.

As a little aside, I’ve enjoyed the fun little character details peppered in throughout the season, and this episode was no different. For example, during their little sit-down with He Who Remains, Sylvie and Loki are served tea. Through this, we learn that Loki takes his tea with two sugars, while Sylvie takes hers with nothing. Yeah, that sounds about right.

…But What About the TVA?

We sadly don’t see much of the TVA headquarters or agents this episode. There’s a scene in which Ravonna Renslayer (Gugu Mbatha-Raw) and Mobius (Owen Wilson) briefly face off in Renslayer’s office. Although Mobius enters this scene ready to prune the judge, Renslayer manages to disarm him and flee through a mysterious portal.

This is clearly setting something else up, either for one of the upcoming MCU films or Loki Season 2, but I couldn’t help but feel a little let down. Mobius left Episode 5 promising Loki that he would “burn down” TVA headquarters. I was so pumped up for a wild fight between people in futuristic business attire. And this is all we got? Of course, I might also just be bummed that we never got to see Mobius (or a Mobius variant) ride on a jet ski. Having Mobius talk so much about jet skis in the first few episodes only to have no jet ski appearances…this was the cruelest deception of them all, Michael Waldron.

“Boots on the ground now. Archives.”

This episode concludes with Loki finding himself back in TVA headquarters after Sylvie pushed him through a portal. He finds his way to the TVA archives, where he also locates Mobius and Hunter B-15 (Wunmi Mosaku). Loki frantically tells them that “we freed the timeline” and “someone is coming- countless different versions of a very dangerous person and they’re all set on war.” In a surprising twist, Mobius and Hunter B-15 react perplexed and confused, not at what Loki is telling them, but at Loki himself. A very concerned Mobius asks “Who are you?” before Hunter B-15 calls for back-up.

And then Loki looks up and finds a statue of a very militant-looking and un-masked He Who Remains is suddenly standing at the center of the Archives (cue creepy music). If this scene looked familiar to you at all, that was on purpose! Loki writer and producer Eric Martin claimed on Twitter recently that this ending was deeply inspired by old Twilight Zone episodes and the conclusion of the original Planet of the Apes.

And this makes a lot of sense- while seeing the decayed Statue of Liberty informs a horrified George Taylor (Charlton Heston) that he has been on Earth this whole time, the sight of the He Who Remains statue tells Loki that the TVA headquarters is not the familiar place he assumed it to be.

I’ve seen some discussion over whether or not this finale, in focusing so much on setting up a number of different films as well as its second season, failed to deliver a satisfying ending. I find myself somewhere in the middle of this argument. Was it a perfect conclusion? No, not really. But given the very massive stakes, world-building, and potentially game-changing consequences that Loki took on, I wasn’t really expecting a perfectly buttoned-up finale. Honestly, I tend to like finales that maintain a lot of ambiguity. But perhaps that’s the Lost fan in me talking…

So, while I’m sad to see this first season of Loki come to an end, I’m very excited to see everything that it set us up to, from the upcoming MCU films to Loki‘s second season.

Did You Watch Loki Episode 6?

We hope you enjoyed our Loki episode 6 review! All six episodes of Loki are available exclusively on Disney+. Let us know what you thought of the first season of Loki over on Twitter!