The Road To Godzilla vs. Kong – Looking Back At Kong Skull Island

King Kong remains one of cinema’s most enduring monsters. In 2017, Legendary Pictures brought the undisputed King of Cinematic Monsters back to his roots. 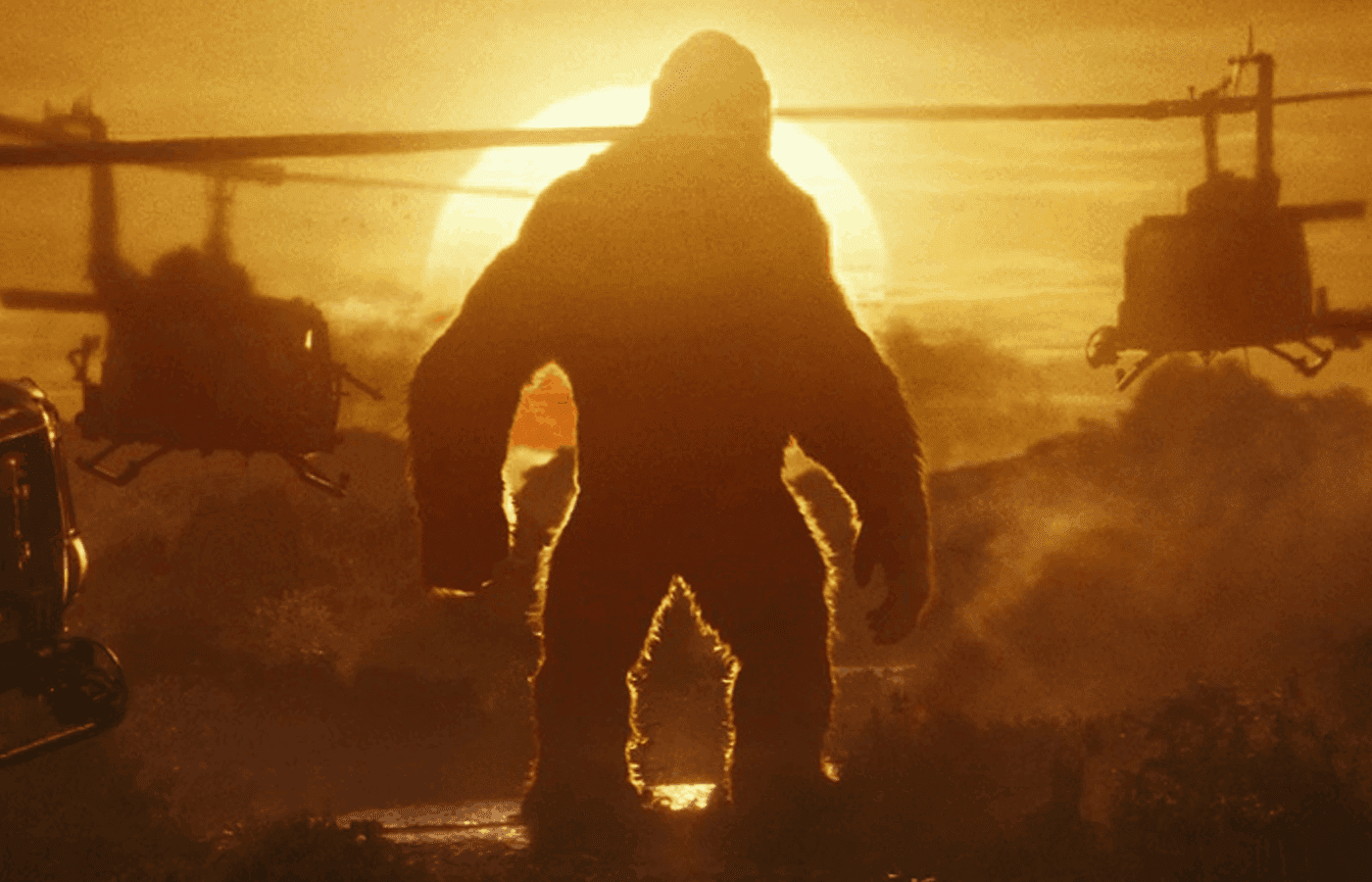 From the original black & white classic and stop motion animation to men in rubber suits to fully CGI representations, Kong remains one of cinema’s most enduring monsters. In 2017, Legendary Pictures brought the undisputed King of Cinematic Monsters back to his roots.

We all remember the first time we saw Merian C. Cooper and Ernest B. Schoedsack’s 1933 classic King Kong. For me, it was an amazing experience. It’s not my first time with stop motion animation, that was Ray Harryhausen’s work on Jason And The Argonauts 1963, but I distinctly remember how sad I was when Kong fell to his death… spoilers for an 88-year-old movie!

Since King Kong came out, moviegoers have seen more and more giant monsters appear on the silver screen – the second most famous being, of course, Godzilla. The only difference between the two is that Godzilla has seen entire series and eras of movies, whereas Kong only has had remakes or reboots to date. But with the release of 2014’s Godzilla and the announcement of the Monsterverse from Legendary Pictures the news of a new Kong movie elicited much excitement from yours truly.

To be honest, I didn’t like Godzilla 2014 at all. The trailers made it seem like we were going to see Bryan Cranston go up against the Big G in a fight to the death. What we got instead was a cock-tease movie where the moment Godzilla showed up, the movie would cut to boring humans doing boring things. Give me kaiju battles!

But then we got the first trailer for Jordan Vogt-Robert’s Kong: Skull Island and instantly it appeared that Legendary Pictures had learned some valuable lessons from what is now known as “the good American Godzilla movie”. The big one being to not skimp on the main attraction, which are the monsters! And Kong: Skull Island’s first trailer delivered the monster goodness perfectly.

Another lesson Legendary and the minds behind the Monsterverse took away from the previous movie was that the human characters had to be interesting. Let’s face it; Aaron Taylor-Johnson’s Ford Brody is not the most interesting person to follow about when you have Godzilla running around too. Thankfully, all the characters in Kong: Skull Island are entertaining and bring something to the proceedings.

And the third and most important lesson learned by the creators was this; they couldn’t just remake King Kong ‘33 again. Dino de Laurentiis produced the first remake in 1976 and honestly, it’s pretty bad and silly. By updating the story and adding capitalism to the mix, Kong ‘76 is a mess.

The next remake came in 2005 by way of Peter Jackson. Unfortunately, even though this is a loving take on the original story (even setting it in 1933), the two big problems with this remake are the fact it is so long and that Kong himself is nothing more than a gigantic Silverback Gorilla. So the question became how to make a Kong movie without remaking the original and fitting in certain things from Godzilla (2014)?

A New Kong For A New Age

Enter Max Borenstein who wrote Godzilla 2014, and the first draft of Kong: Skull Island. Other writers on the movie include Dan Gilroy (Nightcrawler, 2014), Derek Connolly (Jurassic World, 2015), and John Gatins (Flight, 2012), who all received story credit.

I was the first writer and I was also the last writer. It was definitely collaborative in terms of what’s on the screen, though none of us worked together. There are pieces of my work in there as well as the work of the other two writers and John Gatins, who was credited for story. Everybody had a really good hand in it.

The biggest contribution from Borenstein was setting the movie in the 70s during the Vietnam War.

What popped into my head for the paradigm of the movie was Apocalypse Now. That’s obviously a war movie, but I liked the idea of people moving upriver to face a misunderstood force that they think of as a villain, but ultimately they come to realize is much more complicated.

When director, Vogt-Roberts came onto the project and he instantly wanted to go with the Vietnam/Apocalypse Now theme:

Then the idea of like Hendrix is playing and choppers are flying around and a fist is coming out of the sky and smashing these things down. And then suddenly, I was like, wait a second, I’ve seen plenty of monster movies. I haven’t seen a Vietnam War movie with monsters. And I haven’t seen something that is riffing off of Apocalypse Now with monsters. And that had a bunch of thematic reasons, beyond it being like an incredible genre mash-up of me thinking like I would wanna see this movie. I feel like people would, like you, would wanna see the film.

And honestly, the posters, the trailers and everything work perfectly for Kong: Skull Island. I’ll always remember seeing the IMAX release poster, a clear riff on the classic Apocalypse Now poster and just thinking, “Fuck yeah!” And that reaction has always been there for me whenever I think or re-watch Kong: Skull Island.

The other thing that Vogt-Roberts brought to the table was his desire to make Kong a monster again. In the 2005 version of King Kong, Kong is nothing more than a 7.5 meter tall Silverback Gorilla. Nothing more, nothing less. It bases everything that Kong does in reality, even though the movie takes place on a fictional island with dinosaurs and giant bugs! Kong is a monster; he walks like a man but looks like an ape. He kills people, other monsters, and does nothing that an actual primate would do…sorry. Sorry, back to Kong: Skull Island.

Taking Kong himself back to his origins in the design and personality brings danger to the character sorely missed in the Jackson version. The moment he attacks the helicopters and owns the soldiers’ asses, my family and I basically fist-pumped the air. All was forgiven for Godzilla 2014.

Awesome cast, right? And all bring their A-game to the proceedings, especially Jackson and Reilly. Now, we all can agree that Samuel L. Jackson is one of cinema’s treasures and here his Colonel Packard brings something we have never seen before to a Kong movie; an obsessive drive to destroy the titular ape that is reminiscent of Moby Dick’s Ahab. Every time I watch the movie, I just wait for Jackson to start spouting lines from the book. His performance is a more manic take on Khan from Star Trek, can’t you picture it easily?

As for John C. Reilly, his Marlow brings the heart and a sense of awe/comedy to the movie with the way he reacts to everything that is happening. This brings me to a point that really puts Kong: Skull Island higher than the other movies with the character: The Iwis, the locals of Skull Island, are presented as wary but friendly and reverent to Kong.

Whereas, in the original movie they were antagonists trying to appease Kong and the Jackson version shows them as malicious and basically evil, in Skull Island they are shown to be another part of the ecosystem. Not good or evil, just surviving and treating Marlow as a member of the tribe.

Now, I already spoke about Packard and his role as the main antagonist, but let’s not forget the other baddie, the Skullcrawlers. These horrors are inspired by the classic movie and the 2 legged beastie crawling up the cliff-face after the log drop. They are mean here: attacking everyone and everything with a fury that rivals the Jurassic Park raptors. We discover that these monsters killed Kong’s parents and that he is basically a child, just trying to survive and keep the Skullcrawler populace down to a minimum.

The way the movie moves from set piece to set piece is almost at a break-neck speed that never lets up, and when it does, we get some great character moments or incredible vistas. But really, what we all care about are the monster fights and the way Vogt-Roberts shoots them. They rival the fights in Pacific Rim. They are shot in sweeping camera movements that show the titans battling while also keeping their scale, speed, and power fully at the front.

If it isn’t obvious, I love this movie! And for me, Kong: Skull Island saved the Monsterverse from being another Dark Universe. How I hear you ask? Well isn’t it obvious? What Gareth Edwards did with Godzilla 2014 was to make a movie grounded in reality and to totally focus on the humans and have the title character more like a third-tier one. That move didn’t make sense since the movie is called GODZILLA!

Because of this and the backlash from the fandom, Legendary Pictures and Vogt-Roberts knew they had to right the possibly sinking ship. By taking the kaiju (thought I’d never use that word, eh?) from the sidelines and putting them front and center while also making the humans more interesting, Kong: Skull Island showed the world what was possible regarding American kaiju movies. (Yes, I know full well what Guillermo del Toro did with Pacific Rim but that wasn’t solely an American movie).

After the resounding success of Kong: Skull Island, the next movie to come from the Monsterverse, 2019’s Godzilla: King of the Monsters continued the trend of placing greater emphasis on the kaiju. And this year with the upcoming release of Godzilla vs. Kong you would do well to revisit this classic of the genre.