Lucky Review (2020) and the Recurring Nightmare of Misogyny 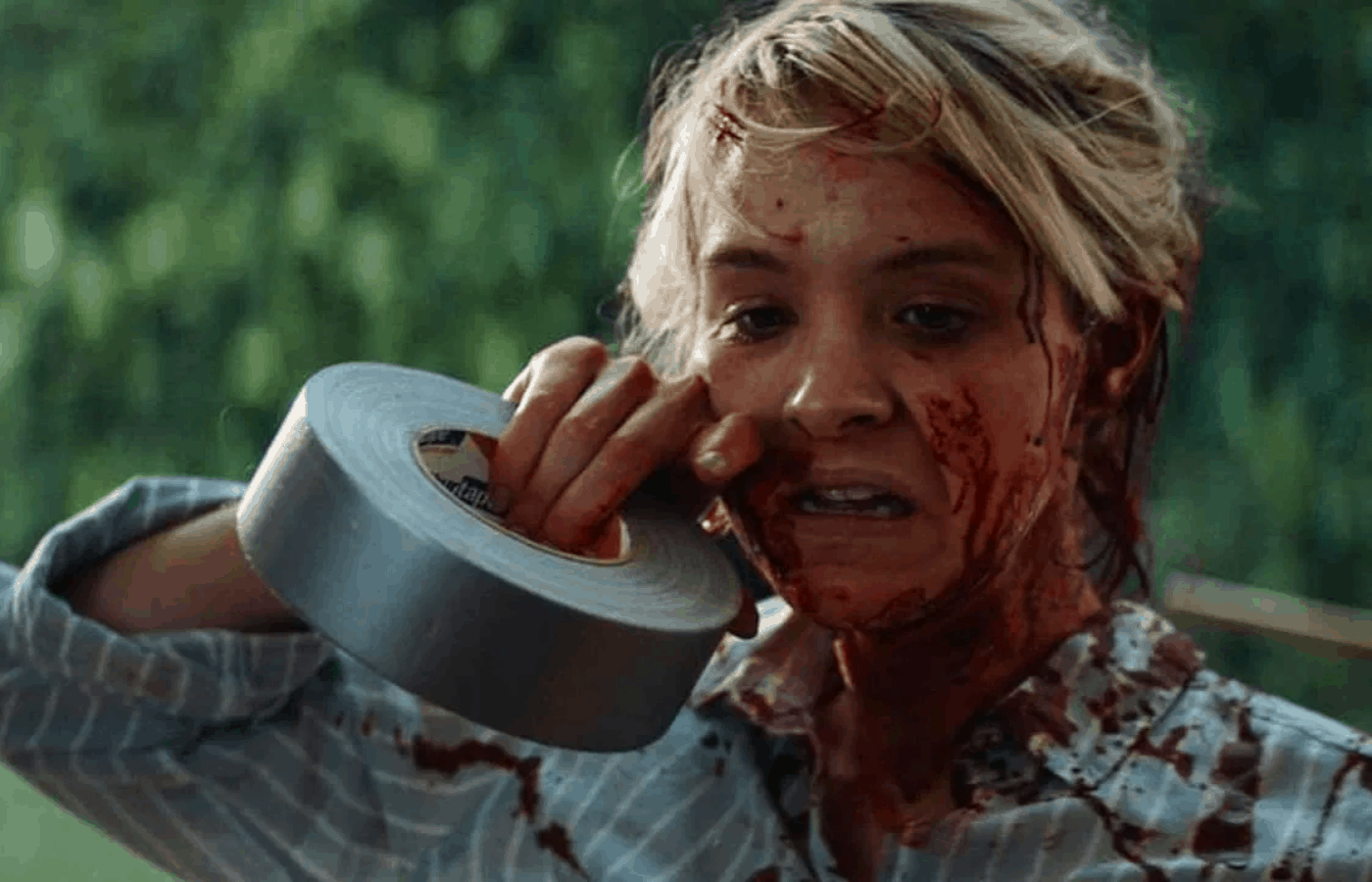 Lucky’s undercurrents of tone policing and minimization run disturbing parallels to the way that conversations with and about women can be handled.

A woman is violently attacked by a man, calls the police, and is then subjected to a line of derogatory, condescending questioning. It’s a situation that is all too familiar to most women and a discouraging reminder of our perceived place in society. It’s also the frustrating concept at the heart of Lucky, a slasher film that takes genre tropes and cleverly twists them into a catch-all metaphor for patriarchal oppression.

In Lucky, a self-help author named May is teetering somewhere just shy of happiness, both in her personal and professional life. She’s thrown off her game by one major inconvenience: a masked man who comes to her house every night and attempts to murder her. Although she manages to hurt him and escape with her life, he always disappears, even if she has killed him. The police are no help. Her husband is no help. She has no choice but to fight for her life daily.

Director Natasha Kermani and writer-actor Brea Grant looked at the home invasion subgenre and saw fertile ground for feminist theory. The tone winks at the audience with a combination that can only be described as a satirical nightmare. It’s smart, darkly funny, and leaves enough room for interpretation.

This Is Just How Things Are

As the plot unfurls, May becomes stronger. Every night the Man attacks, she either severely wounds or kills him. As soon as she turns around to grab rope and duct tape to prevent him from leaving and allow her to present him as evidence to the police, he’s gone by the time she turns back. The mystery is never solved. She can outsmart him, but he just returns angrier.

Fourth-wave feminism and the use of social media to disperse its ideas have brought a lot of followers to empowerment and education. As a group, feminists have gotten stronger and learned how to strike back against toxic masculinity and rape culture. Unfortunately, as a result, this has also created a rise in retaliatory movements, such as the incels and men’s rights activists who stand firmly on the side of misogyny (and often its co-occurring toxic traits: racism, homophobia, and transphobia).

Feminist efforts to propel women toward equality are thwarted and pushed out through several micro and macro aggressions, some of which Lucky provides metaphoric language for materializing and discussing.

Many times throughout the film, when May is trying to get answers about the Man, someone will respond by telling her, “This is just how things are.” Her husband Ted says it when they’re arguing about the Man. Her sister-in-law Sara says it while she’s helping May shop for security systems and weapons. A detective says it when he’s called to her home for what could be the hundredth time. And when presented with an opportunity to help another woman, May says it herself.

“This is just how things are” can be seen as an echo of the sentiments expressed by people who are either benefitting from oppression, or those who are too scared to get out from under its thumb. In practice, it might not always be said so literally; it comes in different flavors, such as “boys will be boys.” This minimization of May’s urgent and dangerous struggle holds a foggy mirror up to our society’s acceptance of violence against women. No one in May’s orbit ever clarifies the phrase’s meaning because there is no possible explanation.

The film’s title reflects a theme that runs through Lucky: May hears on more than one occasion that she is lucky, when truthfully, she never is. She escapes the Man every night through deft planning and resolve, but the police consistently reduce her survival to chance.

Her agent says that she’s lucky when her publishing company offers her another book deal and she reminds him that she has put in painstaking work to achieve her goals, and that it has nothing to do with luck. It clearly goes in one ear and out the other, even while he thanks her for “waking him up.”

Any time May shows frustration or anger, she is rebuked. Ted leaves because she gets heightened during a discussion and tells her that he cannot be around her and that he’ll only return once she has “calmed down.” When she snaps on the detective, who keeps fruitlessly asking for the whereabouts of Ted, he tells her that her anger won’t solve anything.

The undercurrents of tone policing and minimization run disturbing parallels to the way that conversations with and about women can be handled.

May is getting physically attacked within an inch of her life every night. Her heightened emotion is understandable and reasonable, but those around her are easily threatened by it and their first inclination is to begin tone policing her. By admonishing May for her emotions, Ted and the detective are stepping away from the points that she is attempting to make, creating an impossible barrier. She can’t criticize their inaction without showing emotion.

This seems like a nod to the tone policing that real women face every day while debating just about anything. Any show of emotion can be traced to an “unhinged” approach to debate. Anyone who doesn’t want to think about the context of the argument or criticism can seize the opportunity to negate another’s validity by prioritizing their own comfort. It is widely thought that this defense mechanism stems from the myth that women are more emotional than men.

The painstaking effort that May puts into everything that she does, whether it be surviving attacks from The Man or promoting her book, is quickly diminished when someone claims that she is lucky. It’s an assumption that May could not possibly be credible for her own survival. On an even more annoying note, why would anyone who lives a life in fear of being attacked be considered lucky?

Toward the end of the film, May finds herself in a parking garage with no recollection of how she arrived there. She witnesses her assistant Edie being attacked by a different masked man. As she runs through the garage, she sees several unknown women, all exhaustively fending off their own version of the Man.

At the film’s conclusion, Edie manages to pull off the Man’s mask. She watches with confusion and horror as his face shapeshifts seamlessly, changing from Ted’s face, to the detective’s, to several men that we had never seen before.

As women, we all have our own version of the Man. The monster may look a little different, because it’s always a personalized tapestry of the men who have caused us harm.