MANDY (2018): Becoming A God Through Vengeance

Beginning as a lovers tale ending in a bloody trail, this ultra violent revenge flick by Panos Cosmatos is about Nicolas Cage on a rampage for retribution. 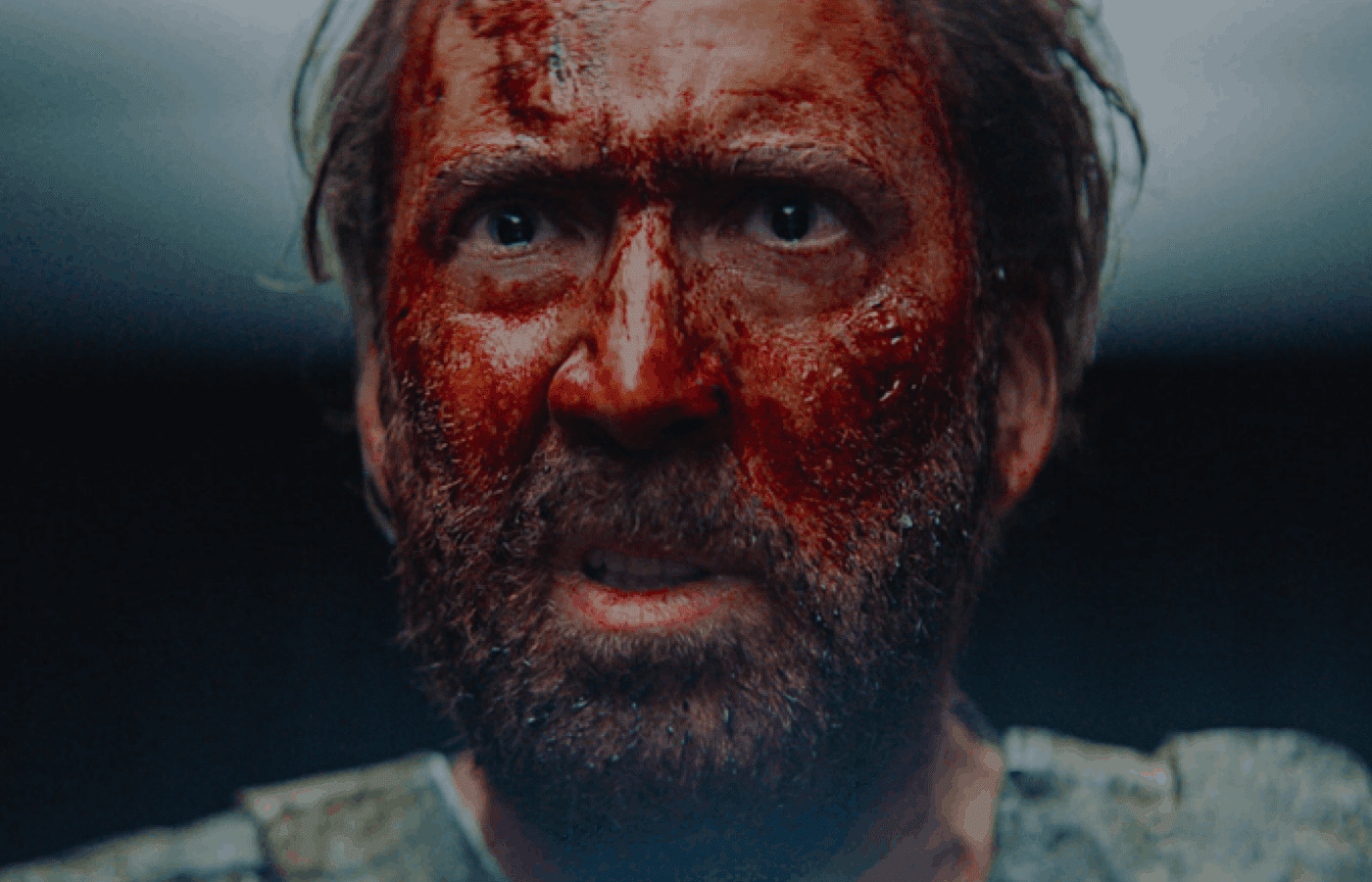 Beginning as a lovers tale and ending in a bloody trail, we finally get to witness Nicolas Cage release his inner deranged self in Mandy. This ultra violent revenge flick by Panos Cosmatos has a simple plot of the protagonist on a rampage for retribution.

But simplicity doesn’t have to mean bad. This film is a lot more than just its stylish tribute to Suspiria’s color scheme and the synth wave metal score by the late Johann Johannsson who is also known for Prisoners, The Theory of Everything, Sicario, and Arrival. There are many allegories pointing to one thing. Nicolas Cage’s character Red Miller is both a savior and a punisher.

The symbolism begins to appear once the antagonist Jeremiah Sand, played by Linus Roache, is introduced. Jeremiah means exalted of the lord and is referred to as The Weeping Prophet in The Old Testament.

He is known for preaching against idolatry and false prophets. Ironically this is Jeremiah Sand’s forte. As a cult leader Jeremiah uses his power to attain whatever he feels belongs to him.

As Red calls them later on in the film.

When Jeremiah initially sees Mandy, played by Andrea Riseborough, he demands the possession of her. Calling his second in command Brother Swan, Jeremiah gives him the Horns of Abraxas.

According to Professor Geller, Abraxas originated from the Greek and later on adopted by the Catholic Church. He was first described as the one who sent Jesus from Heaven on Earth. But eventually was deemed as a demon.

In the Book of Revelations when the seven trumpets are played, the Four Horsemen are released into the world. The same happens when the Horn of Abraxas is blown. Known as The Black Skulls these Hellraiser-esque, Mad Max aesthetic creatures show up in their modern day horses, atvs.

Once the deal of blood for blood is done they show up in Red’s house. The lovers are asleep as the scene enters a strobing 80’s horror scene. Mandy is kidnapped while the Black Skulls nearly kill Red.

Mandy is tied up in a chair in front of Jeremiah. During his self idolatry Mandy laughed at Jeremiah’s naked body quickly showing his insecurities. Humiliated in front of his followers Jeremiah decided to dispose of her.

During this ordeal Red is outside hanging from handcuffs with barbed wire in his mouth. The barbed wire is reminiscent of the thorn crown that Jesus had during his crucifixion. Before the murder Red is stabbed in the bottom left side of his stomach with the tainted blade of the pale knight.

The pale knight stab wound is similar to Jesus’s cruxifixion. In the bible before breaking the knees of Jesus a roman soldier stabbed him with what is known as The Holy Lane aka Holy Spear. It was done to determine if he was still alive.

Jeremiah’s hatred towards Mandy’s rejection is fierce enough to believe she now requires cleansing. Or so this is his excuse to mistreat her because of it.

“But I think that you both shall see the cleansing power of fire”.

In this case fire is used to cleanse, which is what God has planned in the Book of Revelations. In Jeremiah’s mind Earth needs to be purged through flames.

The fire can also be seen as Jeremiah’s jealousy towards their love. He has previously referred to them as lovers. Jeremiah considers himself a greater entity. Throughout multiple verses it is said that God’s jealousy is a consuming fire. The cult leaves after the burning and purging of Mandy and Red is left for dead just how Jesus was.

Red escapes the handcuffs and goes into the restroom wearing a tiger shirt and his tighty whities. His wrists are cut the same way someone hanging from a cross would have. This is where we get his famous scene. Knowing his audience Nicolas Cage gives us what we wanted. We receive the performance of Red slowly losing his mind. Finishing a bottle of liquor while pouring them on his cuts whilst yelling.

Once composed he forged an axe wearing nothing but sunglasses. The title drops and Red’s mission of vengeance commences.

Descending into Hell With Vengeance

The first victims on his hit list are the infamous Black Skulls. When confronting one of them Red flips his truck losing conscience which leads to his capture. He wakes up with one arm handcuffed onto a pipe and the other with a nail through the palm onto the cement. This mirrors Jesus’s stance during his crucifixion.

Red manages to pull the nail out and throws one of the Black Skulls into a deep hole in the process. Each member is killed in a different way ranging from chainsaw duels a la Texas Chainsaw Massacre 2, to head blows with his axe in an exploitation 70’s action Grindhouse type of way.

After the savage killings Red confronts Jeremiah in a dungeon. Jeremiah begins with his overplayed sayings of how holy he is and the amount God has gifted him. Instantly it’s transparent how much of a pathetic excuse he is of a “leader” in the time of peril.

“A psychotic drowns where the mystic swims.”

This alludes to both of their takes to the spiritual. Red makes Jeremiah kneel down before him while crying about carrying God’s Gift and offers him a blow job in exchange for his life.

Red crushes Jeremiah’s head by his temples. In this gory scene Jeremiah’s eyeballs are squashed out of its sockets. Red ignites his zippo lighter and burns the body of Jeremiah cleansing him. Jeremiah is punished and Mandy is avenged. In the world that Panos Cosmatos created, Red Miller is the one true god.