William Afton: The Many Incarnations of FNAF’s Villain

He always comes back. 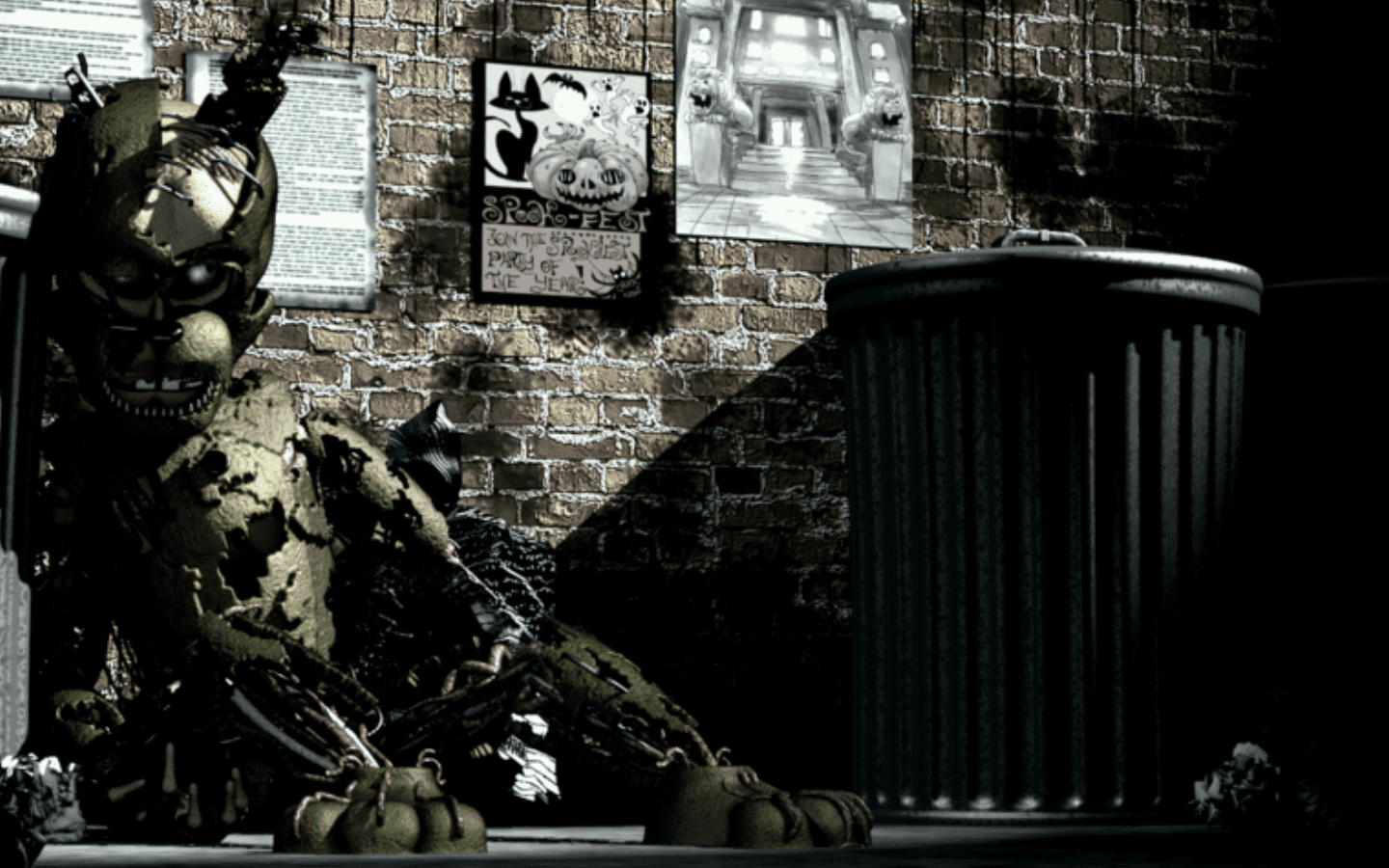 Who Is William Afton?

William Afton is the main antagonist in the survival horror video game series Five Nights At Freddy’s. Throughout the cryptic lore of the series, we learn a lot about William’s family life, death, and multiple resurrections.

While the entire story of Five Nights At Freddy’s is not known (due to its cryptic storytelling methods), the basic story of William Afton goes as follows:

William Afton is the father of three children. He runs a franchise of Chuck E. Cheese-style restaurants with his partner Henry.

William is also a serial killer. He uses the animatronics and customs in his restaurants to lure and murder children. William’s pursuits have led to the deaths of many children, including his own kids and his business partner’s child.

Many people believe that William is nothing more than a cold-blooded killer. Others speculate that William’s murders are due to his quest to find immortality for himself and his now-deceased children. William’s experiments in robotics have led him to the discovery of a substance known as Remnant. Made up of the soul energy of the dead, Remnant can be harnessed and used to bring life to mechanical creatures.

William takes on many forms throughout the course of the Five Nights At Freddy’s games. Today we are going to look at each incarnation of William Afton, and how each form of this character plays into the story of Five Nights At Freddy’s. For this article, we are sticking to just the main series of games. We will not include the iterations of William Afton found in FNAF: Special Delivery, FNAF World (or other teaser/troll games), the novel series, or the Fazbear Frights book series.

The Many Incarnations Of William Afton

Fans often refer to this style of William Afton as ‘Purple Guy’ due to his purple appearance. While William Afton is shown as Purple Guy we see him murder a group of children and tamper with the restaurants’ animatronics.

After the souls of the murdered children were set free, they confront William in the back room of the establishment. Spooked by the ghosts of his victims, William attempts to hide in his Spring Bonnie springlock suit (a suit that doubles as both a costume and a standalone animation).

The springs holding the mechanisms in the suit fail, crushing William to death. The problem here is that William’s soul begins to possess the yellow bunny costume that killed him, transforming him into a being known to the FNAF community as Springtrap.

After William Afton is killed by springlock failures in the back room of the restaurant, his soul possesses the costume in which he died. The room that he died in is sealed off for many years. This leaves William’s costume, and his corpse inside it, to rot and wither away.

All of that ends when a new attraction comes to town. Fazbear’s Fright is a haunted-house-style attraction attempting to capitalize on the fame and folklore surrounding William Afton’s murders. The crew running Fazbear’s Fright tries to get their hands on any authentic Freddy Fazbear artifacts they can find.

This all comes to a head when they find a rotting yellow bunny animatronic in the back room of an abandoned Freddy Fazbear’s pizzeria. What they don’t know is that they have finally freed William Afton from his confinement.

After they bring Springtrap back to Fazbear’s Fright, the night guard begins to notice that Springtrap can move on its own. The night guard must keep Springtrap at bay by luring him away from the guard’s office with the sound of children. This is what makes up the core gameplay of Five Nights At Freddy’s 3.

Fazbear’s Fright meets a tragic ending when the establishment burns to the ground with Springtrap still inside. In FNAF: Sister Location, we get a quick glimpse of Springtrap rising out of the burnt debris at Fazbear’s Frights. William is back and ready for his next gruesome adventure.

RELATED: How To Draw FNAF Characters – 14 Tutorials and Resources

William’s old business partner, Henry, decides that it is time to take care of William Afton once and for all. Henry designs a fake pizzeria under the Freddy Fazbear name. This causes William, and the other remaining antagonists, to come to the restaurant and continue wreaking havoc.

Springtrap is in rough shape. His forearm has fallen off, leaving a sharp piece of William’s bone exposed. The springlock suit is in even worse condition than we saw in Fazbear’s Fright. Regardless, William is still committed to his evil pursuits. This deteriorated version of Springtrap is commonly referred to by the fans as Scraptrap (for good reason).

After all of the antagonists are inside the fake restaurant, Henry decides it is time to burn the place down. Unlike Fazbear’s Fright, the fire works this time (or does it?). William Afton is sent to hell to be punished for his sins.

William is now serving out the punishment for his crimes. Some fans believe that William is in the afterlife and is being tortured by whatever deity exists in the Five Nights At Freddy’s lore. Other fans believe that William technically survived the fire and that his punishment is being handed to him by the vengeful soul of one of his victims (based on hints from the Fazbear Frights anthology book series).

Regardless, William is getting a taste of his own medicine. He is trapped in a nightguard office, similar to the ones in his restaurants. He is forced to continually fend off an army of his own victims and creations, only to be brutally killed over and over.

We never actually get to see William while this is happening. In Five Nights At Freddy’s Ultimate Custom Night, we play as Afton, and the game is from a first-person perspective. Nonetheless, I think it is safe to say that this version of William Afton is different than both Springtrap and Scraptrap.

While William is in his state of eternal torment, a new company is created that wants to reboot and rebrand the Freddy Fazbear name. The company wants to alleviate the brand’s murderous reputation and get everything back to normal. At least that is what they want us to think.

The new company’s strategy for public relations includes the development of a video game. This game would make light of the folklore surrounding Freddy Fazbear’s Pizzeria and bring the company back into good standing with the public.

However, the company used computers from old Freddy’s establishments to make the game. What they didn’t know (or maybe they did) was that a piece of William Afton’s soul still remained in the equipment.

The combination of the old equipment and the new video game revived William Afton as a computer virus. This virus appears in the game as a sewn yellow bunny costume wearing a purple vest and bowtie. This digital version of William Afton is known in the series as Glitchtrap.

Glitchtrap’s goal is to possess or mentally link with the beta testers of the game. By doing so, he may be able to transfer himself back into the physical world. One particular tester, Vanny, was swayed by Glitchtrap and began to carry out his dark deeds.

Funko made this awesome Glitchtrap action figure that I like to keep on my desk.

Now that Vanny has taken the helm, she is attempting to bring William Afton back into the physical realm. In Five Nights at Freddy’s: Security Breach, she is successful in doing so.

William returns to the real world as an even more burned and broken-down bunny. The player character faces off with him once. Burntrap is then taken away by a blob of his previous victims melted together.

We will have to wait for either a new game, or Security Breach DLC, to see where William Afton’s story is headed. Is the amalgamation taking Burntrap away to protect him? Or is this new entity out for punishment? How does this play into the stories of Gregory, Vanessa, and Glamrock Freddy? We will have to wait and see

Learn more about the Five Nights at Freddy’s lore by reading The Freddy Files.

What Is Your Favorite Version Of William Afton?

We hope you enjoyed our overview of the history and versions of William Afton. What is your favorite incarnation of the villain? Let us know on social media!