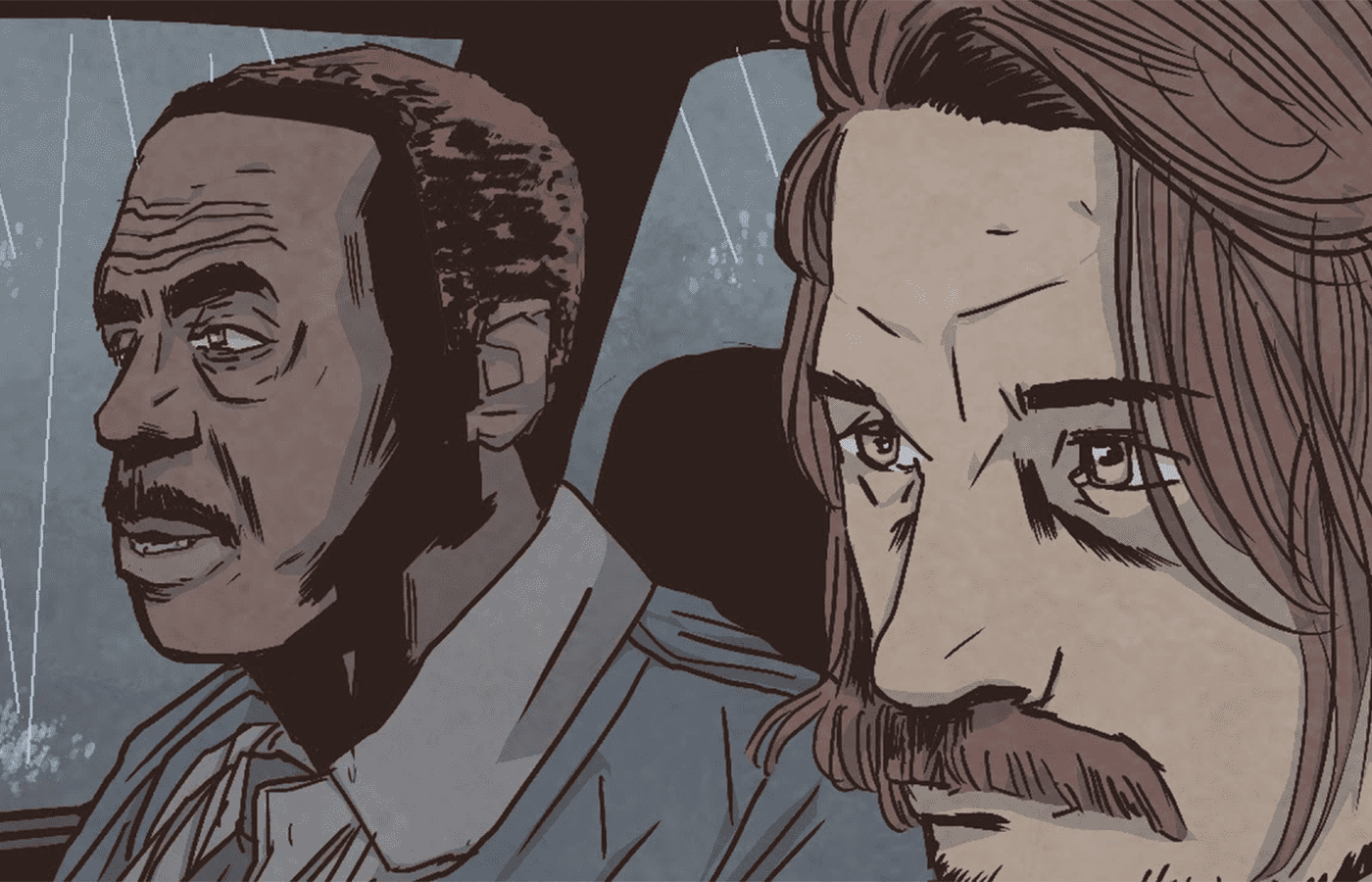 You probably have heard the news in the past couple of years, with the many scandals of people in high power getting away with murder or worse things. Well, I have. Now, have you ever felt that you are not in power, that whatever you do there will always be bigger fishes laughing at your misery while they are feasting on money and unlawful immunity?

Memoria comes as an iteration of this feeling, of what the United States of America might feel like today. Released as a complete series on December 7th 2021 by TECC Content through ComiXology Originals, this neo-noir take on the corruption and fall of the country is brought to us by author and editor Curt Pires and artist Sunando C.

You might already have a pretty bleak idea for this story, right? When I read this comic, I made a lot of ties to one of my favorite shows: True Detective Season 1. But before I persuade you with this perspective, let me tell you more about the premise. We follow two hard-boiled detectives: Reynolds and Daniels. The first being more mature and older than the latter.

However, they’re both troubled with trauma. They assigned these detectives a case at Elk Creek, which seems either like a very easy or a very hard mystery to solve. A crime scene with snuff photos seems to be the work of a serial killer. Are the photos an art project? Are they pictures of dead women? Who would do something like this? And why?

However, the issue is more than just a detective story. The reader can trace comparisons to the United States of today, with people sick of living, others struggling to live by the rules, others not caring and instead succumbing to their depravities and excesses, while the actual crime in which the story is centered on is tangled deep into the very forces of justice, who keep us safe. Do they keep us safe? Who can we trust when blackmailing and manipulation can turn just the right police chief into an accomplice?

The characters are certainly the best part of this project, divided into five chapters. The characters help in gluing you to the pages in the comic. They have troubled lives that could lead to anywhere. Detective Reynolds is hateful, angry, ill, and grieving. His wrinkles let you understand he has gone through enough stuff that words can’t fully describe, even though it gives us an explicit telling of what happened to him.

Detective Frank Daniels is a troubled, careless man, consumed by alcohol and sexual desires. Aside from the main characters, we get creative glimpses into the world around this supposed crime and detectives; families living in harsh situations, nightclubs, people working for low wages, perverted requests that most people wouldn’t imagine are a real thing.

RELATED: 6 Essential Batman Comics To Read Before ‘The Batman’

More positive aspects are also the very violent and depraved situations inside this dark, American mystery. You don’t want to be part of this world; you prefer to watch it unfold as characters bleed and people fuck each other out of spite. The narrative effort is actually intriguing inside its noir atmosphere. There’s also an interesting use of lighting from time to time for the characters to show where they are and how every detail of their face (wrinkle, scars, etc.) gives us an idea of who they might be and where they may come from. The ending is very bleak. If overlords control the world, then what chances do you have in coming out in one piece? Exactly none.

But of course, this production isn’t flawless. Mostly, the presentation falls a little behind once in a while. First, the character design can feel a little bland as some details in fully lit faces can be too much in 2D. Then, some of the character expressions can feel a little boring and repetitive. When working with only frames, you have to take advantage of time, so you can express and communicate as much as possible within a few frames. So, inexpressive faces are not fun to look at in a comic regardless of how noir it is.

Also, there’s a couple of rainy sequences where the lines on the background objects are too simple, and end up feeling a little lazy compared to other comics. There’s more than one weird typo across the dialogue: you’re/your, their/there, etc. I thought that it might have been an effort to show different literacy levels in the characters, but these typos are not very consistent.

And finally, there is an issue I have with the story where one of the characters is convinced of confessing his role in all of this. I didn’t believe this person could change his mind just because a journalist told them that this is his last chance to make it okay. This made the ending a little too forced for me.

There may already be a lot of stories covering noir atmospheres, hard-boiled detectives, or retellings on how the world is controlled by only a perverted few. Hell, there are even a lot of copycats of True Detective Season 1 lately on HBO. However, this story stands out for its intention of recreating today’s America with the worst of the worst: a polluted society with rats crawling beneath people’s homes, terrorizing the innocents just because they can.