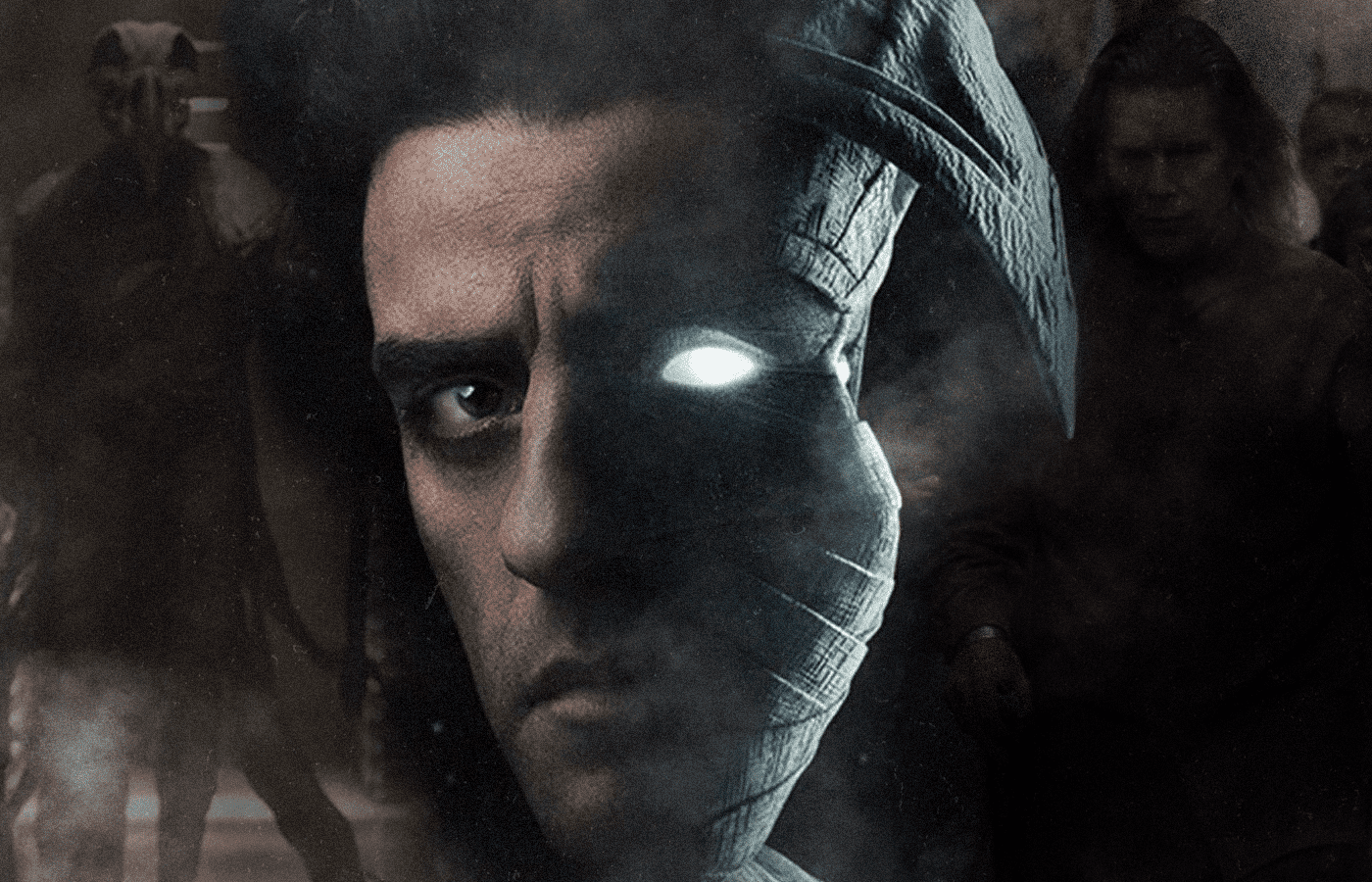 On March 30, Disney released the first episode of its Moon Knight series to its streaming platform, Disney+. Directed by Mohamed Diab, the action-adventure superhero series features a mercenary who suffers from Dissociative Identity Disorder. The Marvel Studios series is six episodes and is part of ‘Phase Four’ of the Marvel Cinematic Universe (MCU). Oscar Isaac stars as the series’ protagonist Steven Grant / Marc Spector / Moon Knight, with Ethan Hawke and May Calamawy also starring.

I’ve been a comic book fan for a while now. I’ve been reading Spider-Man comics since the early 2000s, I jumped into DC back at the start of their ‘New 52’ relaunch, and a Marvel Cinematic Universe devotee since Iron Man. What I truly love about comic books is their element of empowerment. How anyone, anywhere, can be seen and feel like there’s hope in a world so wrought with pain. Take for example, Spider-Man; anyone can empathize with being a broke teenager and being punished for continuously trying to do the right thing.

What Disney and Marvel have accomplished since establishing the MCU all those years ago is introduce a diversity of characters and stories that are being pushed to their furthest corners. Not in the sense of pulling unknown heroes per se, but furthering the understanding of these heroes and their relationship with the modern world. The Falcon and the Winter Soldier offered audiences a chance to see how a marginalized person feels about having to continuously do what’s right even if everybody consistently pushes back, Black Panther reconciles with multi-generational responsibility, Ms. Marvel looks like it’s going to tackle familial expectations while she aspires for a life of her own.

The high-tech suits, larger-than-life battles, and complex lore are the hook to these stories, but the human journey throughout is the anchor. As exemplified previously, the MCU features a spectrum of layered storytelling. Some stories are richer than others, but I prefer my stories to feature a lesson. These characters are not heroic inherently, it’s the acts of heroism while on their respective journeys that define who they are. These continuous courageous acts paint a larger-than-life lesson that makes up our perception of these players.

I first got into Moon Knight with the Marvel NOW! series written by Warren Ellis and illustrated by Declan Shalvey. Ever since reading through the surrealist pages that detailed spirits, gods, and a multi-personality mercenary, I craved a Moon Knight film. Anytime I would get into a conversation with friends about the MCU, the inevitable question was asked “what character would you want to see a movie of?” My answer was almost always going to be Moon Knight.

There was a darker, mythological element to the character that hadn’t been quite captured by the MCU yet. Netflix’s Daredevil gave us an idea of how grounded and brutal the MCU could be while balancing a rich narrative – so there was always hope in my mind for Moon Knight. Then came the first leaks of the MCU Moon Knight series suit and they confirmed Oscar Isaac for the role of Marc Spector, I couldn’t have been more elated. I adored the horror backdrop of Moon Knight’s stories, but I also appreciated its take on mental health.

With DID being a massive element of the original comic book character, it was critical to ensure that it was represented properly in the series. Moon Knight executive producer Grant Curtis spoke about how the production team wanted to make sure that Marc’s DID was depicted honestly and with respect to those who actually live with the disorder. The film crew also spoke with mental health consultants to provide notes on the portrayal. According to Grant, Oscar Isaac himself took the aspect of positive mental health portrayals seriously on set.

“From day one, we took the mental illness aspect of this story very seriously and we wanted to approach it very reverential and very respectful.”

Though this story still finds itself in the realm of fantasy, the mental health aspect of the character has always drawn me to Moon Knight. Though I do not have DID, I do grapple with my own mental health disorders. Moon Knight‘s hook is getting a chance to see a vengeful Egyptian deity battle supernatural elements. The anchor though, is the human characteristics of the person the deity is inhabiting.

Understanding that the production team gave a lot of thought to the positive mental health representation within the series made me feel seen in a way. Aside from mummy crime fighters and superpowered cult leaders, seeing Steven Grant’s DID be treated authentically speaks volumes. Knowing all this now, how did episode one of Moon Knight set the stage for the rest of season one?

Episode one of Moon Knight begins by introducing us to the series antagonist and cult leader Arthur Harrow (Ethan Hawke). Harrow is performing a ritual of sorts by drinking water from a glass, wrapping the cup, crushing it, then placing the broken pieces within his shoes. One could infer this is a form of self-sacrifice and gesture of faith to the Egyptian deity known as Ammit. It also seems Harrow does this as a form of self-punishment, a way for him to right some type of wrong. As he steps into his shoes and walks away, we’ve cut into the next scene, introducing us to Steven Grant (Oscar Isaac).

Steven wakes up and goes about preparing for his day, but there are some unusual things about his morning routine. First, we see him unstrap his own leg from a post in his room, we then see him get up from his bed and walk across a circle of sand, he then goes to pull painter’s tape from the seam on his flat’s door, and checks on his singled finned goldfish. All of this is played off though, as very normal for Steven. These habits Steven has formed are perhaps strategies to cope with his DID.

We see Steven leave his flat in London and soon understand he’s clumsy. He is late to work but is at least passionate about the subject surrounding him. Steven shows a deep appreciation for Egyptian culture but is chained to being a gift shop associate for the museum he’s employed at. He’s approached by a tour guide who reminds him of a date they planned for Friday, even though Steven can’t recall it. A date to a steak house, even though Steven is a vegetarian.

Steven also faces some type of insomnia at night. He tries to sleep and suddenly he’s in another country with men shooting at him. He’s told by a disembodied voice to hold on to a golden scarab within his jacket pocket. As he’s evading the men with guns, he runs into Arthur Harrow. Arthur summons a crowd to judge members individually on their morality. Some are good, but the ones that are bad somehow die by Arthur’s hand. Arthur then approaches Steven about the golden scarab. Steven now scared, attempts to give it to Arthur but something forces him to keep his hand closed.

Throughout this, the disembodied voice is calling Steven a fool and not to give Arthur the scarab. Steven blacks out but when he comes to, he discovers several of the gunmen have died. Steven wakes up from it all and thinks it’s all a nightmare. He goes to feed his single finned fish and finds it has both fins back. He rushes to the pet store to confront the employee about it and how a goldfish could grow a missing fin back. She tells him she didn’t know, but she was sure it had both fins when she sold it to him the day before. Steven recalls not being there the day prior, but has to rush off for his date.

Steven arrives at the steak house and calls his date to see if she’s still coming. She answers angrily, telling Steven he should have shown up two days ago. Somehow, Steven does not realize that it is Sunday and that he missed his date. All around confused, Steven returns to his flat to discover a cellphone with dozens of missed calls. He answers the call as it comes in and it’s a woman wondering why he hasn’t answered her messages in months. She then calls him Marc and hangs up.

Steven is then followed by some type of mummified creature with a large bird skull as a head. Steven frantically rushes to work and finds Arthur Harrow waiting for him. Steven realizes his nightmares were not fictional. Arthur judges Steven to determine if he’s good or bad but simply tells Steven that there is chaos within him. Steven runs off to work and as he’s closing, he discovers some sort of creature hiding within the shadows of the museum. It chases Steven into a bathroom where he’s confronted by a reflection of himself asking to take control. Steven refuses but soon understands it may mean his life.

As the creature is tearing through the door, Steven grows wrappings from his back. It cuts away as we see the creature trying to claw away from whatever Steven has become. It is then in the destroyed restroom we see what Steven has transformed into. Cloaked in all white, golden pieces of armor, and cloth-like wrappings, Moon Knight has taken the helm of Steven’s mind.

The title of episode one is ‘The Goldfish Problem’ but what does it mean? Perhaps it’s in reference to something you thought was the original that has been seemingly replaced without you ever noticing. This would be apt since Steven seems not to be fully aware of when he is and isn’t in control of his own body.

In Moon Knight, as Steven Grant is lying in bed he’s shuffling with a Rubick’s Cube, the multi-colored puzzle box toy. Perhaps a throwaway prop, but for me, the cube represents something more. Moon Knight is multi-faceted. He’s a vigilante, a supernatural defender, and an Egyptian deity’s herald. He’s a complex but exciting character to introduce within the MCU because there’s no one quite like him yet. Moon Knight can be Marvel’s Rubik’s Cube.

A character with multiple tones that can fit into several unique properties. I can see Moon Knight partnering with Daredevil to fight gang-related crime, while at the same time assisting Doctor Strange with magic entities. He’s a multi-faceted character that’s so enigmatic it’ll take viewers several times to fully solve what drives him.

Overall episode one of Moon Knight sets a brilliant precedent. From the wonderful character acting, the creepy creatures, to the gorgeous backdrops, it’s hard to find any flaws in the Marvel series. Along with the series being slightly detached from the rest of the MCU, you may not have to play catch up with the other films or television shows to enjoy this new series. If you’re looking for a rich and complex superhero narrative, Moon Knight is the perfect place to start.

Will You Be Watching Moon Knight?

What did you think of Moon Knight episode one? Are you excited to see how the story unfolds week after week? Let us know your thoughts on social media today!