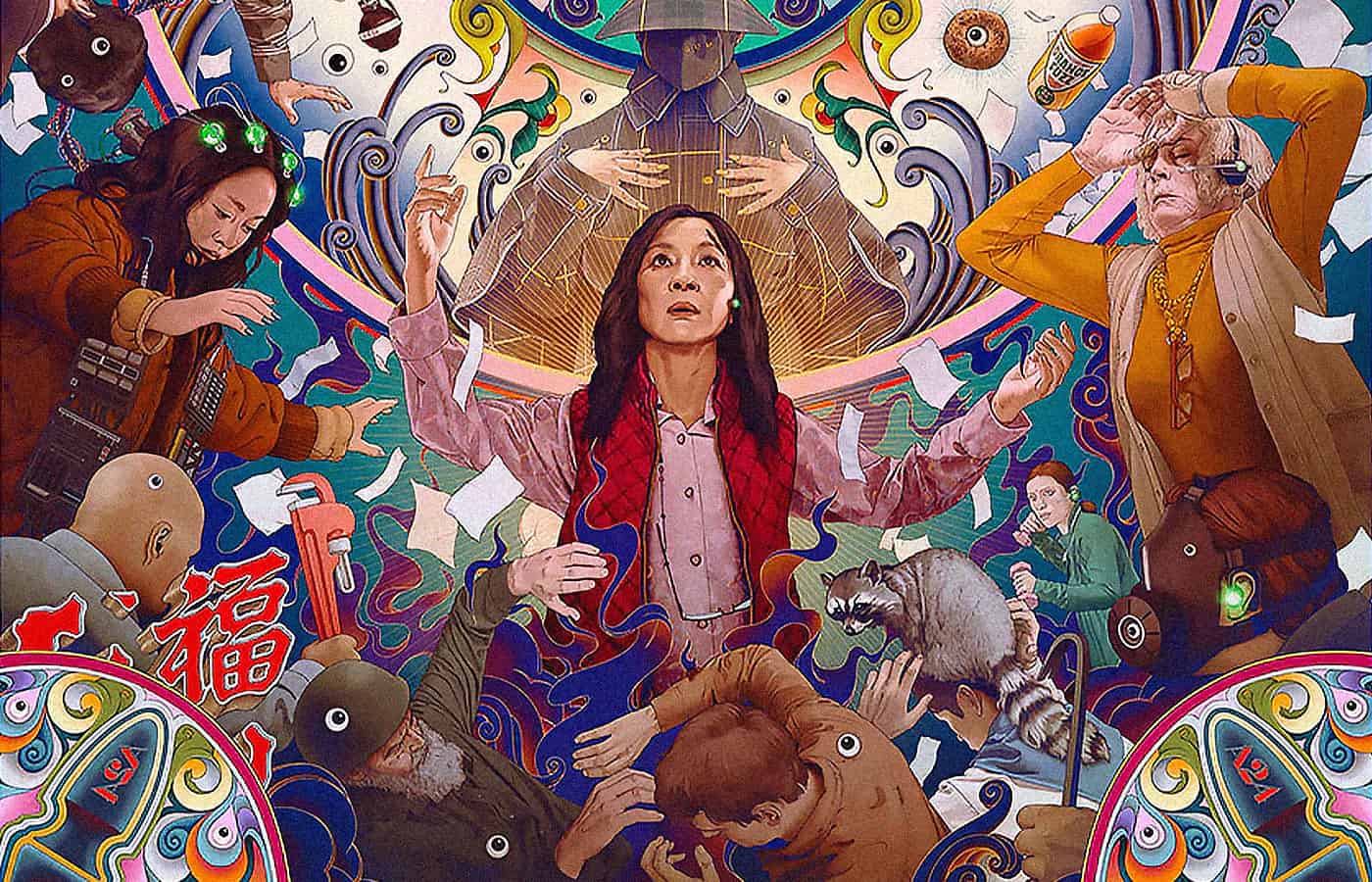 Every year, without fail, when it’s time to start thinking about ‘Best Of Lists’ I am positively dumbstruck by how long a year really is (and yet, the time slips right through my fingers, as I suppose it’s already January by the time this is posted). Though it feels as if it has zipped by, 2022 has been slapped full of bangers. I’ve run the full gamut of emotions at the theaters; I cried at AvaTwo (Avatar: The Way of Water), I giggled with sick delight at Pearl, I was annoyed with myself for getting swept up by Top Gun: Maverick (it’s set up like a heist movie, and slaps so hard, but the Tom Cruise of it all bums me out).

It’s been a year of cinema that my friends have been teasing me over because I’ve been “hooting and hollering” at just about everything. But most importantly to me, it’s a year that has been fun to spend at the movies, and what follows is a list of some of my very favorites. Enjoy!

Directed by Jeff Tremaine, Jackass Forever is a hell of a way to start this list but I’m no chicken. It’s a Jackass movie, we’re working without much of a plot here, but watching this movie after approximately 1 million delays felt like coming home after a long time away and hanging out with your silliest friends. For a year that I’ve spent at cinemas sincerely hooting and hollering, Jackass Forever provoked the most audience reaction I’ve seen in ages, and it really affirmed the power of seeing movies in theaters. In a shockingly slammed screening on the opening weekend, we screamed, we laughed, we gagged, and I cried… It was a deeply silly and sweet start to our year. Come for the stunts, and stay for Silver Fox Johnny Knoxville and Steve-o in Demonias.

In Turning Red, the boy band 4*Town is truly 4 Ever; 13-year-old Mei Lee and her unstoppable, perfect gang of girlfriends have to see them live and the only things stopping them are her sheltering parents and, of course, a newly awakened generational curse that causes Mei to turn into a GIANT Red Panda when she experiences heightened emotions (you know, puberty stuff, happens to us all). I remain on a fence between feeling very old that the cornerstones of my childhood are being mined for nostalgia and completely, utterly delighted that young girls’ loves and interests and perspectives and autonomy are being presented so beautifully on film. This film is a true feat and it remains a damnable shame that it was relegated to Disney+; bring your tissues and hold your framed photo of Sandra Oh close.

Everything Everywhere All At Once

Directed by the Daniels Everything Everywhere All At Once is my number one of the year with a bullet. Daniels’ Everything Everywhere All At Once, admittedly at first is a little overwhelming, it strings together a dazzling, beautiful story of love and choices. Life moves so quickly and the pressures of modern life weigh heavy, it can be easy to let your mind drift and wonder what could have happened if you’d made different choices. Evelyn Wong gets the chance to see those realities and so many more after she’s tasked with saving the world from an all-powerful multiversal force. I was lucky enough to catch it with a pal in an early Imax screening, and to say we were floored by the film would be an incredible understatement. Michelle Yeoh and Ke Huy Quan, come get your flowers!

As a dedicated Reader (a Publicist… a Kayteigh, even) of the Las Culturistas podcast hosted by Bowen Yang and Matt Rogers (and often Joel Kim Booster!), this film had been on my radar and hotly anticipated for quite a while. The timeless story of Elizabeth Bennett, Mr. Darcy, and the whole Bennett family maps really beautifully onto the experience of a Summer on Fire Island. Sun-soaked and sweet, I will always be a sucker for a slow-burning romance and chosen family narratives.

The chemistry between Joel Kim Booster and Conrad Ricamora fizzes and pops right off the screen through all the well-loved beats of Pride and Prejudice (there’s even a hand flex!). There’s a whole set piece centered around honoring the iconic performance of one Marisa Tomei in My Cousin Vinny and the band MUNA also covers the seminal Britney Spears song Sometimes for the finale, which is critically important culture specifically for me.

Night of the Coconut

Directed by Patrick Willems, this is a second multiverse comedy about inanimate objects with googly eyes, however, for my money, this is one of the great achievements in Pandemic Art. [Bear with me as this setup takes a minute] Patrick Willems’ YouTube channel, one I love for its outstanding film analysis, began using the openings/closings of its videos to tell a larger, connected story in early 2020. The story was that of Charl (singular), a sentient coconut that slowly reveals himself to be malicious, hellbent on reaching the top of the IMDB star meter and achieving global fame by any means necessary.

In 2021, a season finale was announced to be coming as a short film, starring Patrick, Charl, and a gang of his friends who’d all had longtime roles in the story, namely Matt and Jake Torpey, and Chloe Holgate. The short film quickly became a full-fledged feature, finally debuting Spring of this year, and is an unbelievable story of friendship, clout chasing, and fighting evil with your multiversal twin self. The film is only available to watch via Nebula, but I cannot recommend the purchase enough. The filmmaking is excellent, the script is funny, the songs are bangers… Darren Aronofsky even shows up in a brief cameo.

Directed by Anthony Fabian, Mrs. Harris Goes to Paris is this year’s Paddington movie (Our protagonist goes off to someplace new, they do not necessarily fit in at first, and through the sheer power of their kindness eventually endear themselves to the space and improve the lives of everyone they touch). Our Paddington figure, the titular Mrs. Harris, is a war widow and a housekeeper who becomes enamored by a Dior dress and travels all the way to Paris to purchase one. My friends and I found our way to the Old Lady Matinee and were met with a surprisingly rowdy, emotional, and deeply sweet showing. It’s deserving of a space in the pantheon of cozy, comfortable cinema.

Directed by Zach Cregger, Barbarian was a film I was already firmly sold on by the trailer going in. On its face, a film about a woman checking into an Airbnb already occupied by Bill Skarsgaard is captivating fare in a Lifetime Movie Network sort of way. What was excellent about this promo was that it was an iceberg; a quick way to get butts in seats knowing only the briefest setup, maybe 15% of the movie at most, and darker, richer terrors lay just ahead, through the threshold of a hidden basement door. I’ll speak very little of what lies ahead, just on the off chance a reader here hasn’t had the pleasure of experiencing the film for themselves, but I can assure you this was one of the most surprising and gratifying horror watches of the year.

RELATED: Barbarian (2022) Explained: The Monsters We Make Of Women

Seen by my roommate and me in the biggest theater the Disney Springs AMC has to offer with twelve other people hours before an impending hurricane was an experience I will not soon forget. Gina Prince-Bythewood’s filmography is one to be truly admired (if you’ve not seen 2014’s impeccable Beyond The Lights you better stop reading this right now and go give yourself a lil treat) and her latest effort is a rich, complicated, political war epic.

The Woman King is an ensemble piece, focusing on the Agojie of Dahomey; an elite army of female warriors. Viola Davis and Lashana Lynch are both giving their absolute A-Game and it would be criminal for Viola in particular not to get an acting nom out of this. It’s quite the thing to see. (There’s also a bit of business with a sword on a rope that is just excellent),

(F*** you, I’m throwing in) Blah, blah, blah It’s E.T.! We know it’s good! Everyone’s seen it! Except, here’s the thing, I kind of hadn’t. Not really. My mom rented us the VHS from blockbuster when I was young and in the first few minutes when E.T. is scared by the police and takes off running and screaming into the woods, the sound he made was so distressing I turned it off and never looked back.

Since then I had never made the sincere, purposeful choice to sit down and pay attention to it until some dear friends and I sat down in the Imax theater of a nearly abandoned tourist area and watched it for real. A life-affirming story of kindness and love, with all the cornerstones of a Spielberg banger and an indelible John Williams score, as big and as loud as we could see it and newly restored. This was a welcome breath of fresh air at a time when I was feeling cynical about the state of movies in the fall.

For my money, Cate Blanchett is one of the finest actors working today and her performance as the mercurial conductor Lydia Tár is her opus. Already a highly decorated artist when we meet her, Lydia is weeks away from conducting Mahler’s 5th symphony for the Berlin Philharmonic. In the specific world of the film, she is the sun and everyone around her is lucky to be in her orbit until they aren’t. The buzz underneath the film, constantly humming, is the looming presence of a former student and the accusation of abuse of power slowly but surely coming to light.

It is a film keenly observed and Tár will accept nothing less than your full attention. Cate fills every scene, every frame, and every micro-facial expression with astounding vigor and complex feeling. Tár is no saint but I ate up every bit she had to give me and eagerly look forward to getting a bit more this Spring when a new short titled The Fundraiser premieres Berlinale.

Far and away one of the most achingly personal films I saw this year. Steven Spielberg’s The Fabelmans has plenty of fun showcasing the director’s youth moving about the country with his family and making home movies, but not without the bittersweet punch of examining the dynamic between his parents, their divorce, and his own role in that dissolution. It’s raw and sad, like willingly playing with a frayed nerve or reading someone’s diary, but always stays entertaining.

You can feel Spielberg’s heart planted firmly on his sleeve. The incredible performances of Michelle Williams, Paul Dano, and Gabrielle LaBelle are worth the watch on their very own, but my god did I blow kisses at the screen for Judd Hirsch’s immaculate 10-minute scene as something of an artistic Ghost of Christmas Yet-to-Come.

And now, a bonus list of other movies that rocked my damn socks: The Banshees of Inisherin, Top Gun: Maverick, Pearl, a 35mm print of Pee-wee’s Big Adventure, Poser, and Nope. Did some of our favorites make your list too? Let us know on social media today.