It’s been three years since the release of Pacific Rim: Uprising, but now, the story continues with Netflix’s latest original animated series Pacific Rim: The Black. Does it hold up to the universe Guillermo del Toro created? 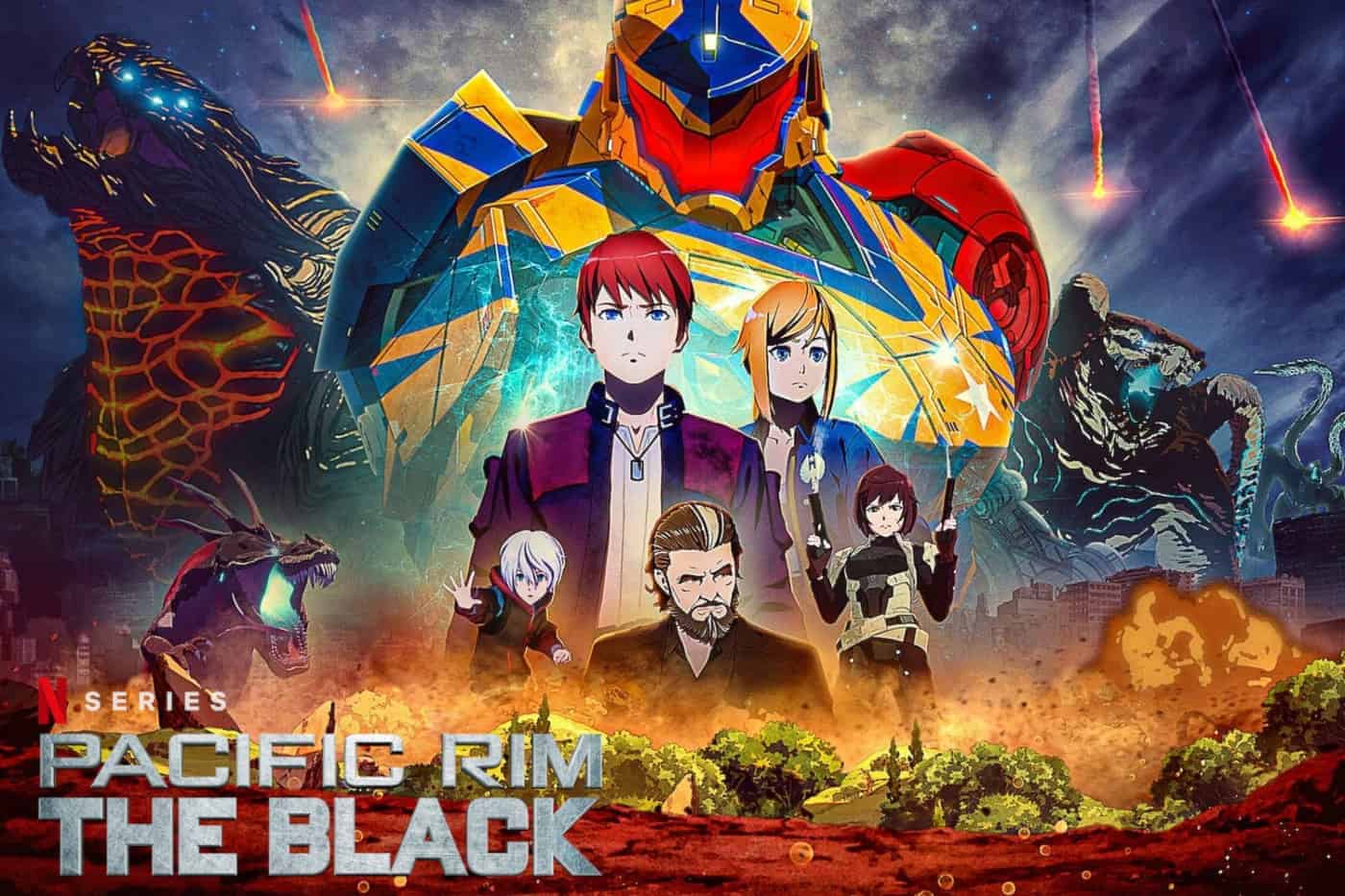 It’s been three years since the release of Pacific Rim: Uprising, but now, the story continues with Netflix’s latest original animated series Pacific Rim: The Black.

I still remember seeing Pacific Rim for the first time. The opening sequence is amazing because we are given a brief history of the kaiju attacks, the creation of the jaegers, and our introduction to Raleigh Becket (Charlie Hunnam) and his brother (Diego Klattenhoff). What follows is a tense search and rescue operation that turns into a literal fight to the death with a kaiju.

It’s an exciting sequence that when the title finally appears on screen, I was left breathless and excited for the rest of the movie. And it did not disappoint. After showing the world what a US Kaiju movie could be, there were high hopes for the sequel.

When it finally came out in 2018, Pacific Rim: Uprising felt more like a Saturday morning cartoon, which isn’t a problem. Gone was the weight of both the kaiju and the jaegers. Now we had a high-speed, almost gravity-defying spectacle reminiscent of Mighty Morphin’ Power Rangers. Unfortunately, the reception for it wasn’t as welcoming as del Toro’s first movie. And the world of Pacific Rim went dark.

Netflix’s latest anime-inspired series, Pacific Rim: The Black, uses the same cell-shading technique used for their trilogy of animated movies, Godzilla: Planet of the Monsters, Godzilla: City on the Edge of Battle, and Godzilla: The Planet Eater. But unlike those movies (and the lumbering title character), The Black is fast-paced, filled with glorious mech on kaiju battles, and also with a healthy dose of mystery, humor, and heart.

Set after the second movie, The Black follows brother and sister Taylor (Calum Worthy) and Hayley (Gideon Adlon) Travis, who discovers a jaeger and the onboard AI, Loa (Erica Lindbeck). The trio set out across The Black, an expansive stretch of the Australian Outback in search of their missing jaeger pilot parents. Along the way they fight kaiju, make new friends, and encounter something far more dangerous than a gigantic monster.

The seven episodes are all 30 minutes long, which means the story moves at a brisk pace and nearly every episode ends on a cliff-hanger. The final two episodes set up plenty of interesting questions for the already green-lit second season.

For this review, I’m going to break it down into two categories: The Good and The Bad. I’m doing this on purpose to avoid spoilers and to make it easier to digest (a lot like a kaiju devouring a jaeger’s arm). There will not be any major earth-shattering or story-ruining spoilers and all opinions on the show are my one and do not represent PHASR. Now, in saying that, let’s begin!

Naturally, when discussing anything to do with kaiju movies/tv shows, the first point of interest are the kaiju battles. And let’s be honest, the only reason that most people are watching is for the spectacle of monsters destroying cities, I know I am. This has always been one of the major positives for the Pacific Rim-verse; the designs of the kaiju are truly creative and filled with character. The same can be said for each of the battles featured in The Black; these are the perfect mixture of the more realistic (never thought I’d say that about kaiju) approach taken by del Toro and the over-the-top extravaganza used by Uprising’s director, Steven S. DeKnight.

Speaking of the kaiju themselves, The Black introduces some interesting designs and concepts when it comes to the terrible beasties. In the first two movies we were shown Godzilla-like behemoths that lumbered and were able to easily destroy entire cities. Here, we get them too, but also smaller monsters. In the second episode, we see horse-sized kaiju and the third brings us a water-dwelling-crocodile type of kaiju. With each new encounter, we’re shown something new and dangerous in a different way to the traditional skyscraper size kaiju that we’re used to seeing.

Pacific Rim: The Black does something that Uprising tried to do, expand upon the world created by Guillermo del Toro and Travis Beacham. Unlike the 2018 sequel, The Black takes the foundations of the world established by del Toro and Beacham. Sure DeKnight did expand and add things, but honestly, they were a little silly. What The Black brings to the table is an expansion of ‘the Drift’ and the world itself.

‘The Drift’ is an interesting concept. It is the way jaeger pilots connect with each other so they can pilot the jaeger. In the movies, we never get a good look at how ‘the Drift’ appears to the pilots except in quick, almost surreal flashes of memories. But The Black? It gives us a physical representation that reminds me of the ‘Sunken Place’ from Jordan Peele’s Get Out.

It’s a pool of floating memory bubbles that each pilot can access a physical representation and a limited amount of interaction. This unlocks potential not thought of before with ‘The Drift’ being used for interrogation in one scene. I can’t wait to see where they go with it in the second season.

As for the world of The Black, instead of being set in Hong Kong like the first movie, the series is moved to the land of dangerous animals. My home, Australia. This offers them a lot to work with, since Australia has a reputation for being filled with all manner of beasties that want to kill you, and the diverse landscapes. If George Miller’s Mad Max series of movies were filmed and they are set in the post-apocalyptic wasteland, why not have the world of Pacific Rim set here too?

Finally, the animation itself is at times gorgeous to look at. Even though the series is CGI with cell-shading, unlike other series that use the same style, The Black makes it work with fluid, smooth animation and moments that reminded me of an animated comic book (especially during a kaiju battle). This is because the animation studio, Polygon Studio, handled the animation for the equally excellent Transformers Prime.

But, alas, dear friends. Not all is sugar and spice in the world of Pacific Rim: The Black. As with everything in life, there are some things that are not up to snuff and even though I’m loathed to point them out… I’m going to.

Like a lot of Kaiju-related media, the focus is usually on the monsters and battles, this means that the human characters are left behind or are nothing more than cardboard cutouts (2014’s Godzilla is a prime example). Unfortunately, Pacific Rim: The Black suffers from the same problem. You would think that with this being a show, the characters would have more time to breathe and be fleshed out. This does happen here with most of them, but there are times where the characters and their actions make no sense whatsoever.

The first episode sets both Taylor and Hayley up as being polar opposites. He is a serious man, angry at the world for the Kaiju problem. She is, of course, the free spirit who wants to enjoy life. It’s pretty cut and dry, standard practice, but then in the second episode, something happens that by all rights should affect the rest of the series. But it doesn’t. This is a continuous problem in the show as far as characters go.

Another problem with the show is the pace of the storytelling. The first episode flies by and certain hard-hitting character moments are not earned, or if they are, I didn’t notice. This is a problem with all seven episodes. There seems to be a race to reach the next kaiju battle or check an item off from the ‘post-apocalyptic wasteland story guide’. This isn’t a bad thing if handled well, and the emotional moments are justified, but here they sometimes seem blasé or obvious. The few surprises the story brought forth were good, but the rest was stock, standard fare.

The last three episodes rock ass. Once we get to this point in the series, the story has ramped up and allows the characters to breathe and interact in a natural way.

Episode 5, called Escaping Bogan, has our heroes escape a camp by stealing a jaeger. This episode in particular shows off how great the show can be in regards to the character interactions and story structure. This is the first episode in the series that slows down and gives us proper character moments, mainly because there is no obvious kaiju threat; just the regular danger of humanity.

Episode 6, Boneyard, is perhaps my favorite episode out of the seven because it hints at something far bigger in the history and world of Pacific Rim. ‘The Uprising War’ reminded me of an episode from Neon Genesis Evangelion, but in the best way possible, and I truly hope the creators of the show Greg Johnson and Craig Kyle expand it further.

The final episode for the first season, called Showdown, is when all the strands come together in an epic boss battle that left me cheering and holding my breath. One quiet familial moment had me tapping my foot and smiling as the main characters acted like friends and danced. I wish for more moments like this.

Our Final Thoughts on Season One of Pacific Rim: The Black…

Pacific Rim: The Black is not a perfect show, nor is it as good as the original movie. But for what we got, it suited me just fine and I cannot wait to see what the minds behind it come up with next. It’s an easy-to-watch show that brings a lot of excellent fresh new ideas to the mix while providing further lore into the realm of the Pacific Rim universe. In conclusion, you don’t want to miss this!