Don’t Call Me Pammy: 27 Pam Beesly Quotes From The Office 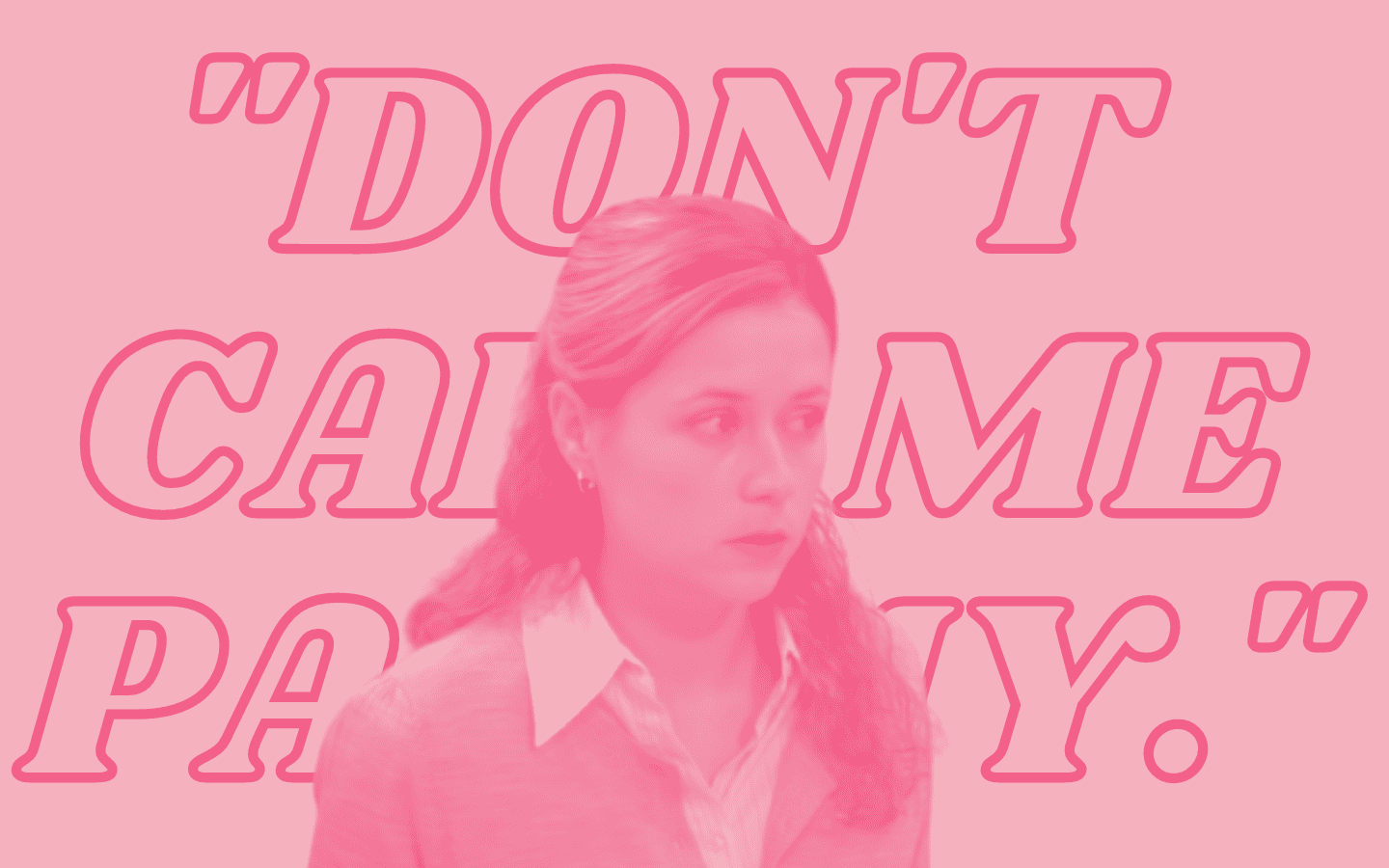 Pam Beesly is one of the most beloved characters on The Office. Played by Jenna Fischer, Pam is the dorky receptionist who spends the first part of the series in a ‘will they, won’t they’ romance with John Krasinski’s Jim Halpert. She is one of the few characters on the show who does not give in to the crazy energy of the workplace. Much like Jim, she kind of serves as our relatable eyes as the viewer.

Today, we want to go over our favorite Pam Beesly quotes. If we missed any of your favorites, let us know on social media.

“A year ago, I got my first art commission to paint a mural for Dunder Mifflin and I decided to paint the history of paper, which was just some trees and stuff. And then someone spraypainted a bunch of butts on it and I had to start from the beginning.” – Pam Beesly

“The building’s custodian is on vacation for the month and Dwight is too cheap to hire a replacement. So, instead, we’re living in filth.” – Pam Beesly

“Michael, do you remember you specifically told me to only bring one sheet of paper? You said it only takes one sheet to make a difference.” – Pam Beesly

“I found out Cece has lice. So I was up all night disinfecting every sheet, towel, toy, item of clothing in the entire house. I’m exhausted.” – Pam Beesly

“I’m sure she’s just confused. People scratch their heads when they’re confused. Not always like an ape, the way Meredith just did, but it happens.” – Pam Beesly

“Phyllis has gotten into audiobooks and lately she’s been listening to 50 Shades of Grey.” – Pam Beesly

“I used to be young and cute and sorta funny and I could do those cute, little cartoons, and everyone who came through here was like, ‘Who’s that receptionist? I like her.’ Now I’m just a fat mom.” – Pam Halpert

“Really, you can’t be scared of a room full of Jims. I love the guy, but he’s basically Gumby with hair.” – Pam Beesly

“I feel horrible for blowing Jim’s prank. I don’t know if you can tell, but he’s mildly upset. And Dwight hasn’t been messed with in a while, so he’s become a monster.” – Pam Beesly

“I’m the office administrator now, which means I’m basically being paid to be head of the party planning committee.” – Pam Beesly

“I recently met Sue, the office administrator at Vance Refrigeration. She has this awesome wall full of fun initiatives and morale boosters and stuff. Sue just goes for it, she’s awesome.” – Pam Beesly

“Dunder Mifflin is having our first own garage sale. Like many Americans, we realized we had a lot of things that we really didn’t need.” – Pam Beesly

“I can’t do this. I had a real job. I sat ten feet away from my fiance. I had health benefits. I was just feeling impulsive. I should have gotten a tiny tattoo on my ankle.” – Pam Beesly

“The unfair thing about working in sales is that your salary is almost all commission. So, you suck at sales, you make almost no money. I guess that’s fair.” – Pam Beesly

“When you’re a kid you assume your parents are soul mates. My kids are gonna be right about that.” – Pam Beesly

“Ryan invited some of the branch managers and Toby into the woods for a ‘Get Yo Know You’ weekend. Michael wasn’t invited. Apparently, they already knew everything they needed to know about him.” – Pam Beesly

“The warehouse got a ping-pong table last week. Now Jim comes down and plays with Darryl. Sometimes, I bring him juice. My boyfriend is twelve.” – Pam Beesly

“I don’t care what they say about me. I just want to eat. Which I realize is a lot to ask for at a dinner party.” – Pam Beesly

“I’ve decided that I’m going to be more honest. I’m gonna start telling people what I want directly. So look out world ’cause old Pammy is getting what she wants…and don’t call me Pammy.” – Pam Beesly

“I don’t often miss Roy, but I can tell you one thing. I wish someone had flashed me when I was with Roy. Because that would have been the ass-kicking of the year.” – Pam Beesly

“Once a year, they bring in a little cart, and they give away free pretzels. It’s really not a big deal…to some people it is.” – Pam Beesly

“There are a few people I decided not to invite, and that might make things kind of awkward, but it’s my wedding…and I don’t want anyone there who has called me a hussy.” – Pam Beesly

“I have so many people to thank for this award. Okay, first off, my Keds, because I couldn’t have done it without them. Thank you. Let’s give Michael a round of applause for emceeing tonight because this is a lot harder than it looks…and also because of Dwight, too. Finally, I want to thank God, because God gave me this Dundie and I feel God in this Chili’s tonight.” – Pam Beesly

“I didn’t watch the whole documentary. After a few episodes, it was too painful. I kept wanting to scream at Pam. It took me so long to do so many important things. It’s just hard to accept that I spent so many years being less happy than I could have been. Jim was 5 feet from my desk and it took me four years to get to him.” – Pam Beesly

“Corporate needs you to find the differences between this picture and this picture. Intel has told us there were at least seven…They’re the same picture.” – Pam Beesly

“About 40 times a year, Michael gets really sick but has no symptoms. Dwight is always gravely concerned.” – Pam Beesly

“Sometimes I don’t put Michael through until he’s already said something. I look at it as a practice run for him. He usually does better on the second attempt.” – Pam Beesly

“Michael started the process of selecting a new chair about three weeks ago, and normally I wouldn’t care but he promised me his old one. It’s way better.” – Pam Beesly

“Michael and his jeans. He gets in them, and I’m not exactly sure what happens, but I can tell you he loves the way he looks in those jeans. I know that’s why he started casual Fridays.” – Pam Beesly

“When Michael is skirting a phone call, he gave me a list of places to say he is. ‘Stopping a fight in the parking lot.’ ‘An Obama fashion show…’ whatever that is, or ‘trapped in an oil painting’. I’m gonna save that one.” – Pam Beesly

“It’s weird. Jan used to treat Michael like he was a ten-year-old. But lately, it’s like he’s five.” – Pam Beesly

What Are Your Favorite Pam Beesly Quotes?

We hope you enjoyed our list of the best Pam Beesly quotes. Did we miss any of your favorites? Let us know on social media!