Quint: The Man Between Ahab and Nemo

Quint from Jaws is a man plagued with trauma from his past and filled with a fury of revenge in the present. Quint is good at two things, and that is sharking and sailing. 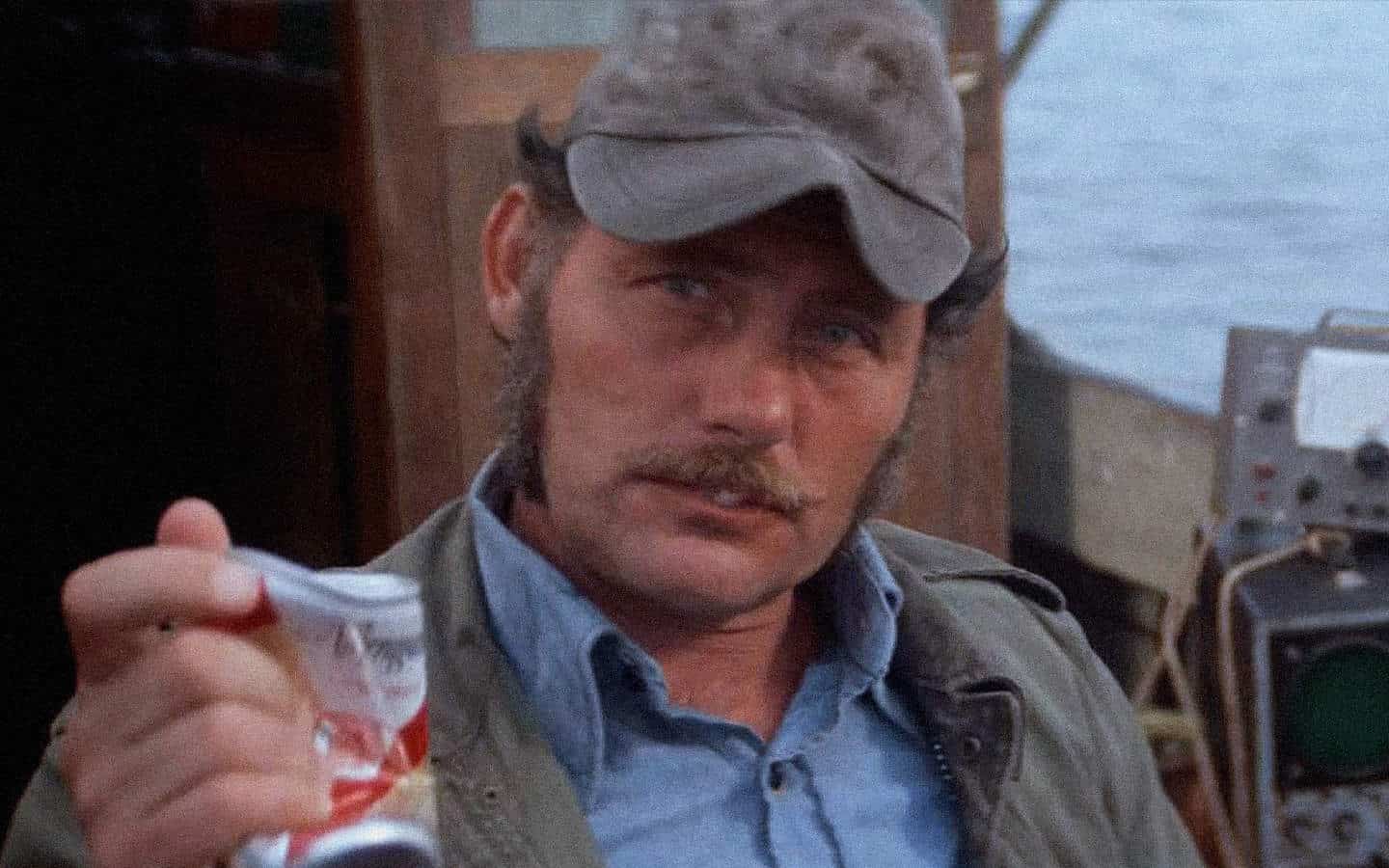 Quint from Jaws is a man plagued with trauma from his past and filled with a fury of revenge in the present. Quint is good at two things, and that is sharking and sailing.

“I know not all that may be coming, but be it what it will, I’ll go to it laughing.”

Jaws is a film that encompasses the horror of what lurks below the sea and those who seek to conquer the great oceanic unknown. This theme perfectly personified in the show-stealing character of Quint, played by Robert Shaw. He is a man who skirts between sanity and blinding revenge like a perfectly tied surgeon’s loop knot.

Jaws has been compared to a modern retelling of Herman Melville’s book Moby Dick. Quint acts as the proxy for Captain Ahab. Those views of him can be valid. I have found him to fall between Captain Ahab and the melancholy captain of the Nautilus, Captain Nemo from Jules Verne’s 20,000 Leagues Under the Sea. So let us examine Quint and why he is a perfect example of the sea captain.

Before we can delve deep into Quint, let us first explore the archetype of the sea captain. The sea captain and the lone fisherman have ap Copeared in stories since we have sailed on boats. They usually are perceived as older gentlemen, generally near the end of their lives. They are usually reclusive or a nomadic hermit on the sea. Some of the most famous captains in pop culture can be found in Moby Dick with Ahab or Captain Nemo in 20,000 Leagues Under the Sea. Men who want nothing to do with dry land and the people that inhabit it.

However, it is a popular version of the sea captain; we also can find other examples of kinder versions. One such example in Greek mythology is Perseus being raised by the fisherman Dictys, who falls into the parameters but is a wise, loving older man. We even see this in Ernest Hemingway’s book, The Old Man and the Sea. Santiago is not a cold reclusive man. He is an older man with strings of bad luck, who gains more humanity and humility as the story unfolds. So the sea captain can fall into a vast range of extremes.

Now, where does Quint fall into this spectrum? I think he falls in the dead middle. Most people’s perception of Quint is as mad as Ahab or as cold as Captain Nemo when sadly, that is not the case at all. Quint is well… Quint – is also the perfect example of the 20th-century fisherman. He hunts sharks, true, but a shark is still a fish with more bite.

I always considered Quint to be the lovable asshole. He is the kind of person that loves to pick fights on thanksgiving but still slips you a $20 at the end of the night so you can buy a new pair of shoes. He is also a man plagued with trauma from his past and furious fury of revenge in the present. He jokes around, is good at one thing, and that is sharking and sailing. He is the ultimate working-class hero. Even the character of Hooper brings it up before they embark on the Orca.

“I don’t need this working-class-hero crap!”

In Jaws, Quint is the working-class hero. He prefers drinking beer on the open ocean. He mocks everything that interferes with his way of life, teases Officer Brody before they even set sail, and, lastly, he is only killing the shark for the money.

In Quint’s case, he is the personification of what we would consider the manliest American man! He was a navy man, he follows his loose sense of morality and, because Quint owns The Orca, he has ultimate freedom upon the ocean. Out of all that being said, the one thing that puts him in the middle of the extremes: He is a broken man, and he knows it.

“Eleven hundred men went in the water, three hundred and sixteen men come out, the sharks took the rest.”

He loses his friends and innocence to the point of never wearing a life jacket ever, his intense hatred of sharks, and even removing his naval tattoo. Suppose we were to examine this again through the archetype of the sea captain of Nemo and Ahab. They both have similar losses: in the case of Captain Nemo, losing his family due to imperialism, and Captain Ahab, losing his leg due to the white whale. All three of them harbor grudges and, in the end, that is what causes their utter destruction.

An example of his trauma can be shown the first time Quint, Hooper and Chief Brody see the shark. Hopper guesses the shark to be twenty feet, whereas Quint corrects him that the shark is twenty-five. If we go back to the U.S.S Indianapolis scene:

“You know how you know that when you’re in the water, Chief? You tell by lookin’ from the dorsal to the tail.”

He knows how one measures a shark in the water and the song that he continually sings, Spanish Ladies, is and was a popular song sung in the Navy. It’s something that Quint regularly sings whenever he is under stress. A prime example of him singing this is the chase towards land before he burns out the Orca’s engine. He is a man plagued with trauma and compensates by putting him in situations that cause his destruction.

His destruction comes from the shark, which to the audience, is a fitting end. The shark hunter being eaten by a shark, just like in Jurassic Park with Muldoon, the big game hunter outsmarted by the raptors. What I have always found interesting about Quint’s death is that, unlike Nemo or Ahab, he comes back to his senses and tries to make it to dry land advised by Chief Brody.

This results in the engine giving out and causing Quint’s fate to be sealed as the shark jumps onto the boat, causing Quint to fall into the shark’s mouth and be eaten.

The dramatic irony is a tragedy, because Quint was not afraid of the shark but much like in his speech:

“I was most frightened. Waitin’ for my turn”.

His biggest fear was waiting for safety, because when you are waiting to be saved and, in your mind, you are letting your guard down. That is when you are most likely to be eaten. Much like here with Quint. They are so close to land, but yet so far. Even his death gives off the same as Captain Ahab, who in Moby Dick is dragged down by the whale while trying to harpoon it.

Herewith, Quint, it is very similar. Fighting the shark with a machete and hoping that he kills it before it kills him, in the end, being dragged down to Davy Jones locker. As we examine the archetype of the sea captain, most of the fates of the sea captain, end either in drowning or being claimed by the sea. That’s because the ocean is where they live and where they will eventually die.

As we have explored with Quint, he fits the archetype of the old sea captain, although what makes him different than the others in popular literature? I have always found that Quint falls into two categories with his character:  The asshole and the kind older man. The asshole nature comes from his image as the working-class hero. The first time we meet him is something out of an ancient sea shanty.

Quint’s introduction would have been him watching Gregory Peck’s Moby Dick, (fun fact – screenplay by Ray Bradbury ) as he laughs at the screen. Another dash of dramatic irony. The kind old man aspect of his character is broken down once Chief Brody, Hooper and himself are on the Orca. He slowly opens up to them. They joke, drink, and laugh. He even teaches Chief Brody how to tie knots.

Quint has his humanity. In contrast, Captain Nemo and Captain Ahab abandoned their humanity on land. We, the audience, sees Quint use his humanity twice near the end of the movie. The first example is taking Chief Brody’s advice and trying to make it to dry land, so they can fight the shark on shallow waters or escape.

The last example of his humanity is handing Chief Brody a life preserver even though he does not put one on himself. It does not mean he wants the other people on the ship to drown or not have a shot being rescued, because he who hesitates is lost!

Quint does have moments where his humanity is blinded. Much like Ahab or Captain Nemo, revenge blinds them all from reason. Ahab is hunting the whale, Nemo isolating himself, but only coming up to attack British ships, and Quint with the shark. We see Quint destroying the radio, cutting off communication.

Leaving it a one on one match with him and the shark. The other moment is burning out the motor of the Orca in an attempt to tire the shark out as they try to make it to dry land. These two flaws result in Quint’s death.

Quint fits all the seafaring, half-crazed captain parameters. However, compared to other sea captains within popular culture, Quint out of all them is the most human. He is a man who lost everything and faced his fears, only to be eaten by the thing he feared the most. Usually, the sea captain being eaten or taken by the sea is a metaphor for man’s constant conquest to conquer and dominate nature.

In the end, it always fails, because nature is so unpredictable that even a person’s best intentions can end up in the beast’s belly at times. Quint will always be one of my favorite characters. He has gone down as a mythical sea captain, who steals the show in one of the greatest horror movies of all time. So to you, Mr. Quint, I pour some apricot brandy! Here’s to swimming with bow-legged women!