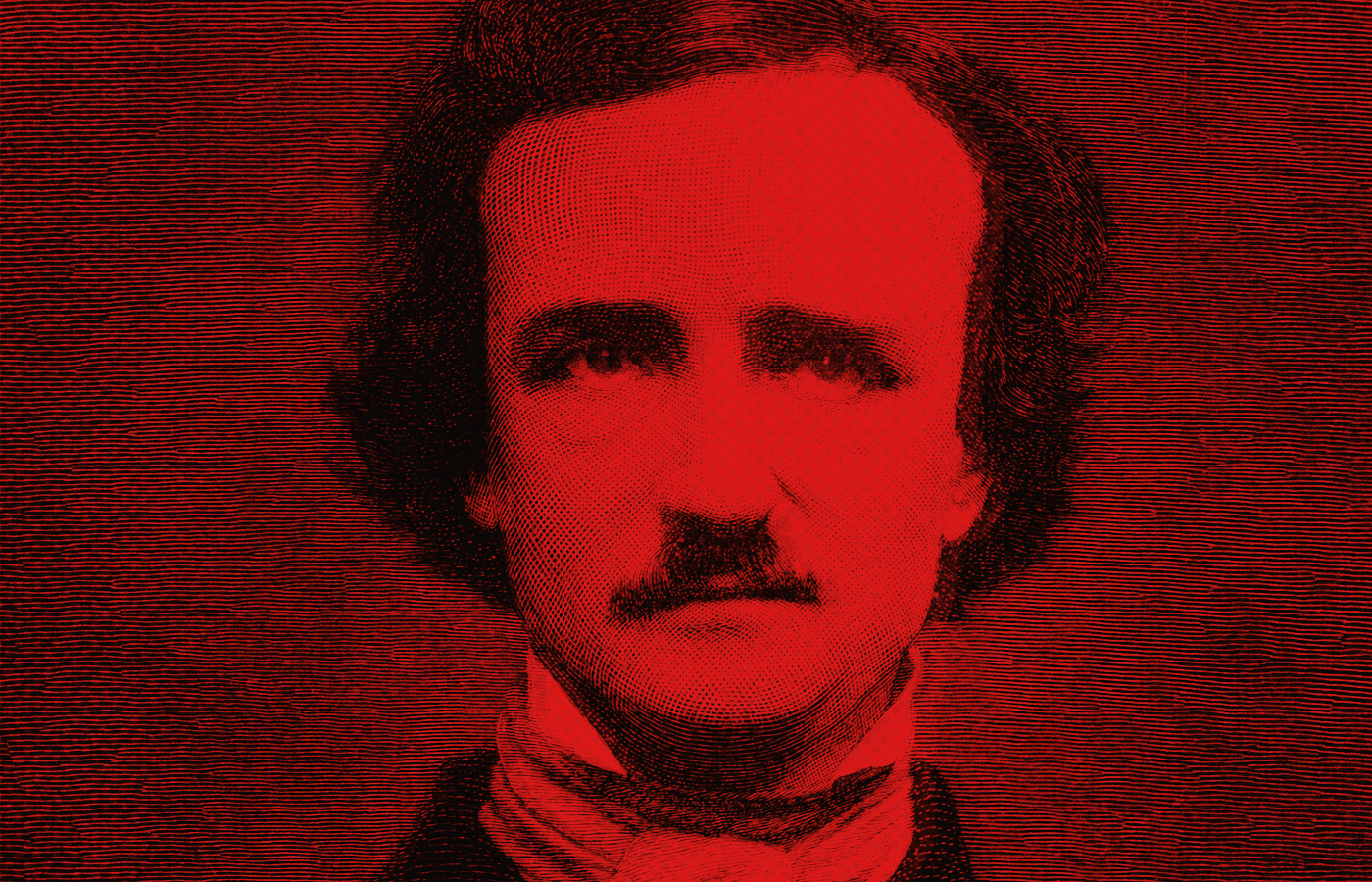 1. I grew up on Edgar Allen Poe, and I loved Alfred Hitchcock’s movies. – Matt Skiba

3. The sky was the color of Edgar Allan Poe’s pajamas. – Tom Robbins

4. I was a promiscuous reader. I loved Nancy Drew books and Tom Swift – never the Hardy Boys – but I also read Dumas, Dickens, Poe, Conan Doyle, and Cornelius Ryan’s war books. As to favorite character: I’m torn between Nancy, on whom I had an unseemly crush, and Edmond Dantes, the Count of Monte Cristo. – Erik Larson

5. Certain of Poe’s tales possess an almost absolute perfection of artistic form which makes them veritable beacon-lights in the province of the short story. – H. P. Lovecraft

6. A lot of ‘Blackheart’ was me, literally in a dark room, confessing my sins; Poe was the influence for that album. But that melancholy has a hopefulness – in every Poe story, there is always a moral at the end. – Dawn Richard

7. I think Poe had a mission to tell us what it’s all about. To answer some of the great questions of life. – John Astin

8. Poe’s saying that a long poem is a sequence of short ones is perfectly just. – John Drinkwater

10. Poe had this curious kind of alchemical courage, where he took all the terrible things and terrors that happened in his life, all this shame and fear and pain, and turned them into great works of art. He was a complex, brilliant person who was just wired too tight. – John Cusack

11. One thing I incorporated in my novel ‘The Poe Shadow’ was the little-known fact that documents show Poe inherited a slave and decided to free him. – Matthew Pearl

12. It is important to me that what Poe has to say gets across to people. I want to give people the feeling that I get from all this. I think that we are succeeding. The feedback is very warm. – John Astin

13. No formal course in fiction-writing can equal a close and observant perusal of the stories of Edgar Allan Poe or Ambrose Bierce. – H. P. Lovecraft

14. Edgar Allan Poe, I think he’s a brilliant poet. I was actually given a copy of his work when I was, like, 8 years old that was my grandfather’s, and I still carry it around with me. – Dove Cameron

15. Edgar Allan Poe is amazing because he was so dark. He’s from Baltimore and so cynical that you can feel it when you’re reading, it feels so honest. – Goldlink

16. I still have my high school copy of the collected Poe – missing its covers and pretty worse for the wear. – Matthew Pearl

17. My favorite poem ever was ‘Annabel Lee’ by Edgar Allan Poe. – Ross Lynch

18. I tend to look way back for my inspiration: H.P. Lovecraft, Edgar Allen Poe. – Drew Daywalt

19. I’ve named a couple things after Edgar Allan Poe: the cat, and my garden upstate, where I only planted black flowers and purple flowers – and there’s a raven statue. – Hilarie Burton

20. There are things so deep and complex that only intuition can reach it in our stage of development as human beings. And to Poe, well, a great logician could be an enemy to him, what he called conventional world reason. – John Astin

22. When I was 12, I had a fondness for horror movies like the ‘Wolfman.’ The boy next door said I should read Poe. – Donald Hall

23. I could hear music playing in the background of works by certain authors, like Poe and Shakespeare. And I discovered Nikki Giovanni when I was in eighth grade. Her writing has a musical energy with pulse and rhythm, almost like jazz or hip-hop. – Jill Scott

24. Poe was a student of many things, and among those things he read and referred to in his work was the Bible. – John Astin

25. I remember when I was very young, I had a fever – a long rheumatic fever in bed for four months. And in the days, I stayed alone with the maid. I only had my father’s books with me. They were fantasy books about ghosts, and also books by Edgar Allen Poe that made a forever impression on me. – Dario Argento

26. Poe was plagued and haunted most of all by something pretty banal: poverty. Probably the most eccentric decision in life was to become a writer in an age when making a living at it was nearly impossible. – Matthew Pearl

27. I think December has always been the most haunted month, from the gothic-narrative point of view – a lot of Edgar Allan Poe stories are set in December. It’s the last month of the year, and it’s supposed to be sort of this mystical, spiritual month. And being Swedish, December is also the darkest month out of the year. – Bill Skarsgard

28. I love horror, mystery, and science fiction, and Poe was one of the founding fathers of those worlds. – Matt Czuchry

29. Edgar Allan Poe, an earlier UVA student, once complained in a letter that his stepfather spoke to him as if Poe were one of the black slaves; some of the students at UVA surely felt the same about being told what to do by faculty. – Matthew Pearl

30. People are transported to that space that Poe wanted to make available to us. – John Astin

31. I think that Poe is so resonant because he represents that part of us that is in misery or sorrowful or wants to explore the darkness. He wrote a great story called ‘The Imp of the Perverse’ about the instinct towards self-destruction. Poe is the godfather of Goth literature and that whole movement. – John Cusack

32. Literature has been part of my life for as long as I can remember. I can’t think back before a time that I didn’t love writing and reading. When I was really young, my mother would read poems to me. I loved Edgar Allan Poe – I am sure I didn’t understand it, but I loved it. – Alexandra Adornetto

33. Poe is the only impeccable writer. He was never mistaken. – Paul Valery

34. One important idea I hope is reflected in ‘The Poe Shadow’ is that fiction can add as much to history as nonfiction does. – Matthew Pearl

35. My English teachers gave me a copy of Atwood’s ‘The Handmaid’s Tale’ when I left high school, which has always been very special to me – it was the novel that introduced me to dystopian fiction. I’m also influenced by Edgar Allan Poe, Dickens, John Wyndham, and Middle English dream-visions. – Samantha Shannon

36. Reading Poe was like a near-death experience, the kind that makes you feel fragile and free in its wake. I felt almost as though I’d scared myself alive. – Koren Zailckas

37. Poe was such a tragic and brilliant figure; he’s somebody whom I’ve been somewhat obsessed with my whole life. I first read ‘The Tell-Tale Heart’ at age four. – Rose McGowan

38. One life is worth the universe. Poe was able to go right into the very depth of life and to demonstrate this. – John Astin

39. I got my first show at Blum & Poe because Paul McCarthy postponed his show, and they came to my studio and asked me if I could put together a show in two weeks. – Mark Grotjahn

41. Epilepsy is a disease in the shadows. Patients are often reluctant to admit their condition – even to close family, friends, or co-workers – because there’s still a great deal of stigma and mystery surrounding the disease that plagued such historical figures as Julius Caesar, Edgar Allan Poe, and Lewis Carroll. – Lynda Resnick

43. I was warped early by Ray Bradbury and Edgar Allan Poe. I was very fond of Franz Kafka. – Margaret Atwood

44. The themes Poe used were universal and timeless. As long as the English language exists at all, we will be able to appreciate what he did. It will not age! It will not become dated! – John Astin

45. I guess one of the reasons I’m doing the Poe piece is that I think Poe demonstrates that no matter how difficult things are, if you continue to move forward in life, you can eventually become victorious, even if it’s later in life. – John Astin

46. I would like to see the technology used to explore more period horror genre works, for example, E. A. Poe. – Robert Englund

47. Detective fiction could not have existed without Edgar Allan Poe. – Giles Foden

What Are Your Favorite Quotes About Edgar Allen Poe?

We hope you enjoyed the list of our favorite quotes about Edgar Allen Poe. Did we miss any of your favorites? Let us know on social media!