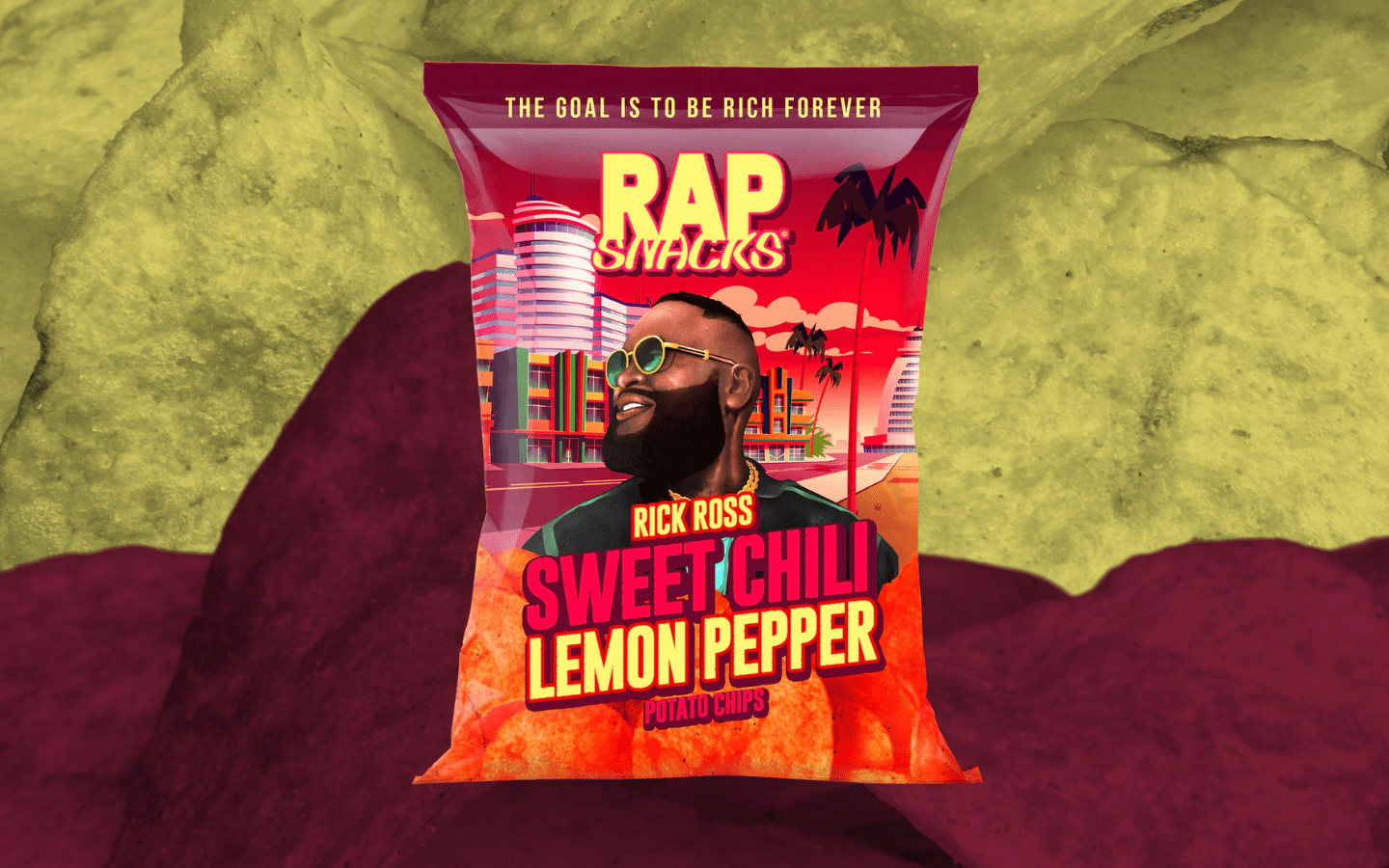 Can we get the feeling of riding with the windows down blaring “Aston Martin Music” from a simple snack? Rap Snacks: Rick Ross Sweet Chili Lemon Pepper Flavored Potato Chips wants to give us the flavor that is synonymous with Rick Ross’ taste, so it has to be implied there, right? It’s a snack that shouldn’t also have us counting the most cash and burying the rest cause “I’m on one“, meaning it should be stacked with flavor. Rap Snacks are famous for bringing forth a hip-hop artist’s favorite tastes to potato chips and giving them the artwork and packaging a true five-star production deserves.

These snacks are hard to find as this is the ONLY time I have seen them. Perhaps it is just that they don’t have a demand for the distribution to happen in Colorado but with artists from Nicki Minaj, Lil Durk, Moneybagg Yo, and Snoop Dogg it would be nice to see these a little more often. Maybe that’s on me because every day I am not hustling. Having procured the bag, it’s time to find out if this is worth the snag.

These are still potato chips so we shouldn’t expect them to necessarily bathe our stomach in the healthiest of ways. However, Rick Ross is on a health kick as of late, so they shouldn’t be awful. The bag I have is 2.5 ounces. In a whole bag you’re getting 380 calories, 22g total fat, 3g saturated fat, 0mg cholesterol, 740mg sodium, 40g total carbohydrates, 3g dietary fiber, 6g total sugars, 6g added sugars, 4g protein, 20mg calcium, 1.5mg iron, and 780mg potassium.

I don’t think we’ll see Rick Ross eating the Rap Snacks: Rick Ross Sweet Chili Lemon Pepper Flavored Potato Chips. They’re not entirely bad, except for the sodium. This is one area that seems to “Push It“. If you’re active though, you should be able to get through this snack without much issue and back to hustling the tasks, no problem.

Alright, so you found Rap Snacks: Rick Ross Sweet Chili Lemon Pepper chips. Now it’s time to open these up and see what they’re all about. If you’re a true immersionist, I might suggest blaring some Rick Ross songs to really set the mood. You should also be in a Maybach if one is available. Make sure you have your finest tracksuit because this has got to be a time for the finest of fine.

It is important to note that this bag is the correct size for a snack and I won’t accept anything less. At the same time, I also found myself wanting more. We see Rick on the big with his trademark beard in what can only be assumed as the city of Miami. It isn’t a bold assumption that these chips will have the style and heat that we know and love about Miami, but how will they stand up to the taste test?

Rap Snacks: Rick Ross Sweet Chili Lemon Pepper Flavored Potato Chips balance tangy, sweet, and entry-level heat so well. It really is a great flavor for a chip and could be a player for the major chip makers. Rick Ross definitely has a flavor here to be considered and one that begs for exploration within the Rap Snacks brand. I’d easily give this a 9/10 with the settled flavor at the bottom really being the cherry on top of this treat.

Thank you for reading our review on Rap Snacks: Rick Ross Sweet Chili Lemon Pepper Flavored Potato Chips! Do you think we accurately documented the flavor of these chips or is our assessment a crime against humanity? Let us know on social media!