Stuart Gordon: On the Director with Dennis Paoli

Stuart Gordon was too big of a talent to leave a single legacy. He made Lovecraft available to cinema in a way that no one ever had. 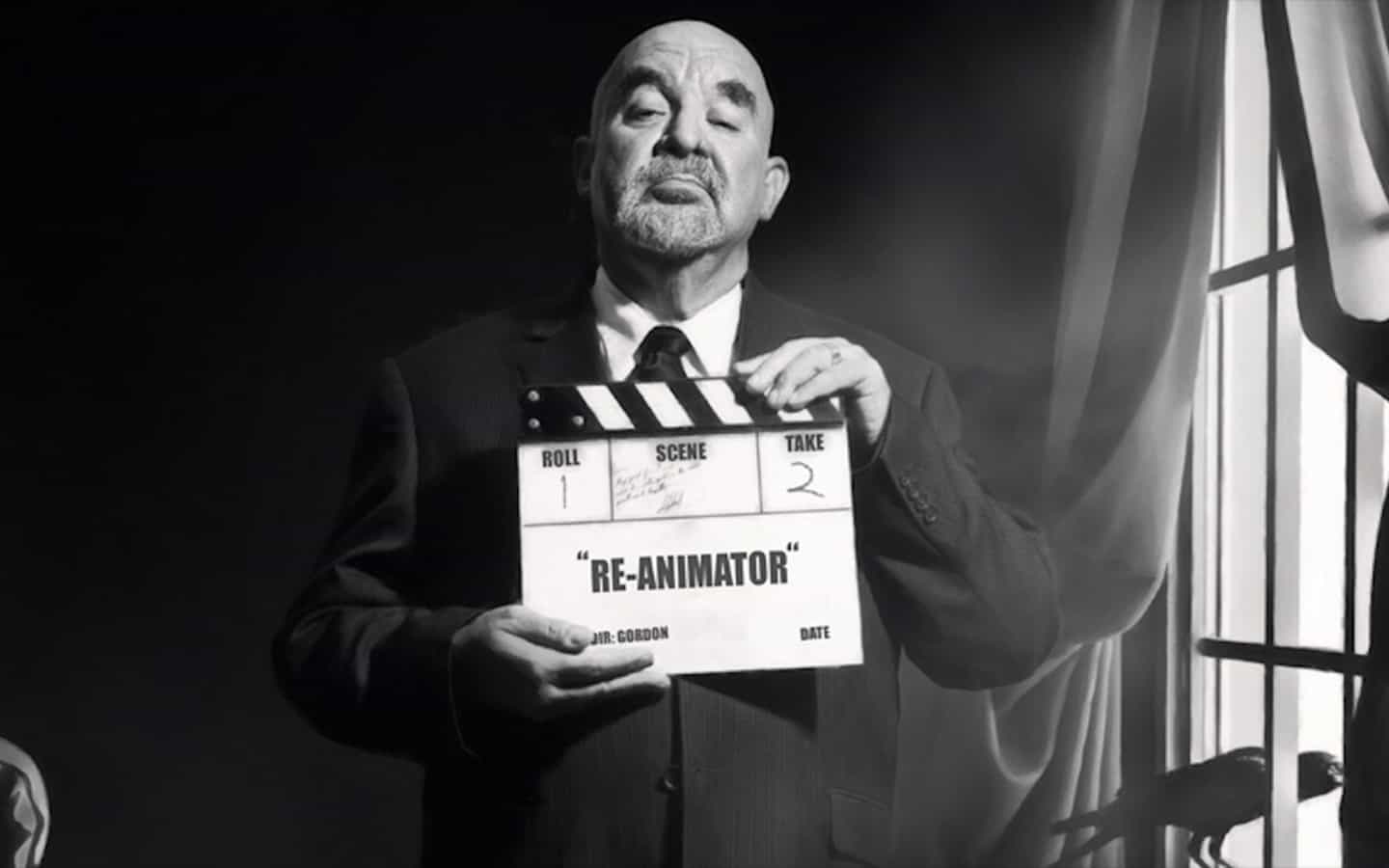 I was first introduced to the work of Stuart Gordon much like most fans of his work: by watching Re-Animator on VHS when I was far too young to do so. Though watching may be too soft a word, as there is nothing soft about Re-Animator, and you do not simply watch this film for the first time—you experience it. You encounter the strange tale of Dr. Herbert West for the first time, and you are never the same afterward.

The horror genre was never the same once Re-Animator was released. Even the staunchest horror hating mainstream film critics couldn’t deny the sheer imagination and innovation of Gordon’s debut feature, and it remains a quintessential work of delirious 1980s splatter mayhem to this day. This is true up and down Stuart Gordon’s filmography. His skill, eye for scene composition and engaging characters, and boundless genius for the mad and macabre put him in a league of his own.

Stuart Gordon passed away on Tuesday, March 24th, 2020, a sad day for the horror community, and indeed the film community at large. Since the unfortunate news broke, social media and genre film news outlets have seen an outpouring of commemorations, stories, and love from fans of the famed director.

Dennis Paoli remembers the man, first and foremost, for the friendship they developed back in their high school days: “[We] met in the lunchroom at Lane Tech in Chicago. He majored in Art and I majored in math, but we had the same sense of humor. And we both loved the Hammer and American International horror films. We also loved Second City and started a satire group, The Human Race, that played the local coffee house circuit in the early to mid-sixties.”

Paoli was Gordon’s longtime collaborator, having written for Re-Animator, From Beyond, the Pit and the Pendulum, Castle Freak, the Dentist (a script that was co-written with Stuart Gordon for the Brian Yuzna directed film), Dagon, and the director’s celebrated episodes of the TV series, Masters of Horror. When asked what his favorite collaboration with his friend was, Paoli offered an answer that likely no fan of the aforementioned pictures would bet on: “I especially enjoyed the several times we got to act with each other. Stuart was a very good actor. He had terrific timing and an expressive face. We did a number of bits and improvs together in our satire group, and during the Screw Theater season in Wisconsin in ’68, we did a Harold Pinter two-hander, the Dumbwaiter. Do Pinter with somebody some time; timing out those pauses together is a shared intuition.” It cannot be overstated, though, that together, Dennis Paoli and Stuart Gordon brought to life some of the most visceral and uninhibited works of horror and science fiction ever seen on the big screen.

When Mr. Paoli came to the Museum of the Moving Image in October 2019 to introduce a screening of Re-Animator in 35mm that I was holding in celebration of Halloween, he spoke to the film’s continued relevance, but I was most moved by the writer’s sincerity, and the esteem he expressed towards his friend’s work, esteem which was ever-present in our recent correspondence about Gordon’s passing: “Stuart’s directing style is at once neo-realist (he adopted Dogma techniques in his later work) and expressionist (think Dr. Caligari),” Paoli said. “Make the madness–the horrific violence, the obsessive characters, the possibility of a reality beyond our “reality”–real. And he was an actors’ director, always trying to get rehearsal time in the schedule, always trusting his actors, always making the line, the scene, the movie about them.”

The ability to balance the mayhem with the staggering humanity of his characters was, perhaps, Gordon’s greatest achievement. Especially in the cases of the director’s Lovecraft adaptations, Stuart Gordon imbued the innate dread of the author’s works with a sense of real-world modernity that in a lot of ways fit audience expectations more nicely than the overwhelming ineffectiveness of people to interact with the universe’s many horrors that Lovecraft expressed in his fiction. Through scripts charged with humor and the strength of performances the director was able to nurture and cultivate in his cast, Gordon found a way to counterbalance the cosmic pessimism of Lovecraft and create versions of these tales that naturally resonate with audiences.

Gordon’s gift for gratifyingly grotesque and provocative, yet deeply human, stories manifested far earlier than his foray into film, though. His time in the theater, which began in the late 1960s, often does not receive the same press as his genre film work, but his stage work is infamous, and the stories surrounding his productions offer quite an interesting perspective on the director’s storytelling philosophies, especially when you think of where he went once he started working in the film industry. Paoli believes Gordon’s plays “were as inventive as any theater work I’ve seen since.” These productions included a “post-apocalyptic version of Shakespeare’s Titus Andronicus, with one line of dialogue (Shakespeare, but cut the dialogue!),” the Game Show, which blurred the lines between reality and drama, forcing audiences completely out of their comfort zone, and was reportedly so intense that performances often ended with riots ensuing, and a production of Peter Pan which twisted the tale into a political satire wherein “the Lost Boys were hippies, the Indians Black Panthers, the Pirates the Chicago Police, and flying was tripping.” Peter Pan saw obscenity charges brought against Gordon and his future wife, Carolyn (to whom he remained married until his death). Stuart Gordon may have courted controversy on stage, but the audacity and unwavering dedication to touching the audience’s nerves not only “helped kick-start the Chicago theater scene,” but would also help the director fully realize and hone his talents as he moved on to Re-Animator and beyond.

Re-Animator began as a possible television program. As Paoli recalls: “Stuart chose the Herbert West stories because they were entertainingly mad, and Lovecraft’s work was in the public domain. When funds were raised to make a feature, I was called in to help expand the story. I was an academic, my field was Gothic fiction, and Stuart knew, from our time in high school, that I had a science background, loved sci-fi, and knew Lovecraft’s work.” From there the project expanded and was turned into a feature once Brian Yuzna came on board as producer. The philosophies in the writing phase of production were still the same, though, as Paoli recalls, and was characteristic of their collaborations in theaters and of how they would work on all their future films together.

“Story-telling values were pretty much the only values that counted in our collaborations. Stuart had a genius for story, for working through the complexities in the most straight-forward, character-driven way. And, of course, he had a powerful pictorial sense–he often did his own storyboards–and I was good at words, but we both wanted to tell the tale in images, visual and verbal. We had similar politics, so the moral bent of the story arc was inherently strong. And if we made each other laugh, it went in the script.”

Re-Animator shocks while exploring the human condition and exploiting the audience’s expectations of its expression. The mystique and peculiar sexuality of From Beyond explores how Lovecraft’s fascination with the fear of the unknown may intersect with horror’s innate relationship with sexuality and gender. Castle Freak gives us a proper creature feature that sees the creature invading a family, further deepening the theme of how a broken family truly shatters over time. The Black Cat episode of Masters of Horror offers a rather provoking insight into the creative process and how working in the horror genre can leave an undeniable mark on a creator—a play on the “if you gaze long enough into an abyss, the abyss will gaze back into you” theme. The Dentist is just plain messed up, and I think we can all appreciate its ability to get under the skin of our cheeks and gums.

Indeed, Gordon’s fundamental approach to cinematic storytelling are hallmarks of a filmmaker who is concerned with the audience before anything else. The director’s philosophy of nurturing expression in all its form to appeal to, or in some cases, assault the senses paired with his trademark black comedy, and empathetic development of character provide sturdy ground for all his films to stand on. And, the simple fun behind the scenes always comes through on the big screen. It’s why the director’s work continues to connect and resonate with people. He had always gone into a project with the intent of crafting a story, and all stories are meant to entertain and engage at once, and, since his 1985 debut in the horror genre, no one had done it better than Stuart Gordon. As a fan, his impact on my love of the horror film is second to none. His creativity has always inspired my own and will continue to do so.

For Paoli, he believes his friend’s legacy is multidimensional and once again expressed affection and admiration that was simply moving: “Stuart was too big a talent and too generous with it to leave a single legacy. He made Lovecraft available to cinema in a way that the least cinematic of authors had not been before. He was in the vanguard of horror humor, walking the taut but tenuous line between what make[s] you scream and what makes you laugh. His visual style and storytelling craft will inspire young filmmakers.

But it is the potent interplay of his theater work and his work for the screen, how the plays he directed looked and felt like films and his films were so highly and effectively theatrical, that should not be overlooked. But mostly it’s what a good guy he was; if you collaborated with him you know how demanding and stubborn he could be, but never at the expense of friendship and appreciation. He listened, he loved to laugh, and he loved his work, but not as much as he loved his friends and not nearly as much as he loved his family.”