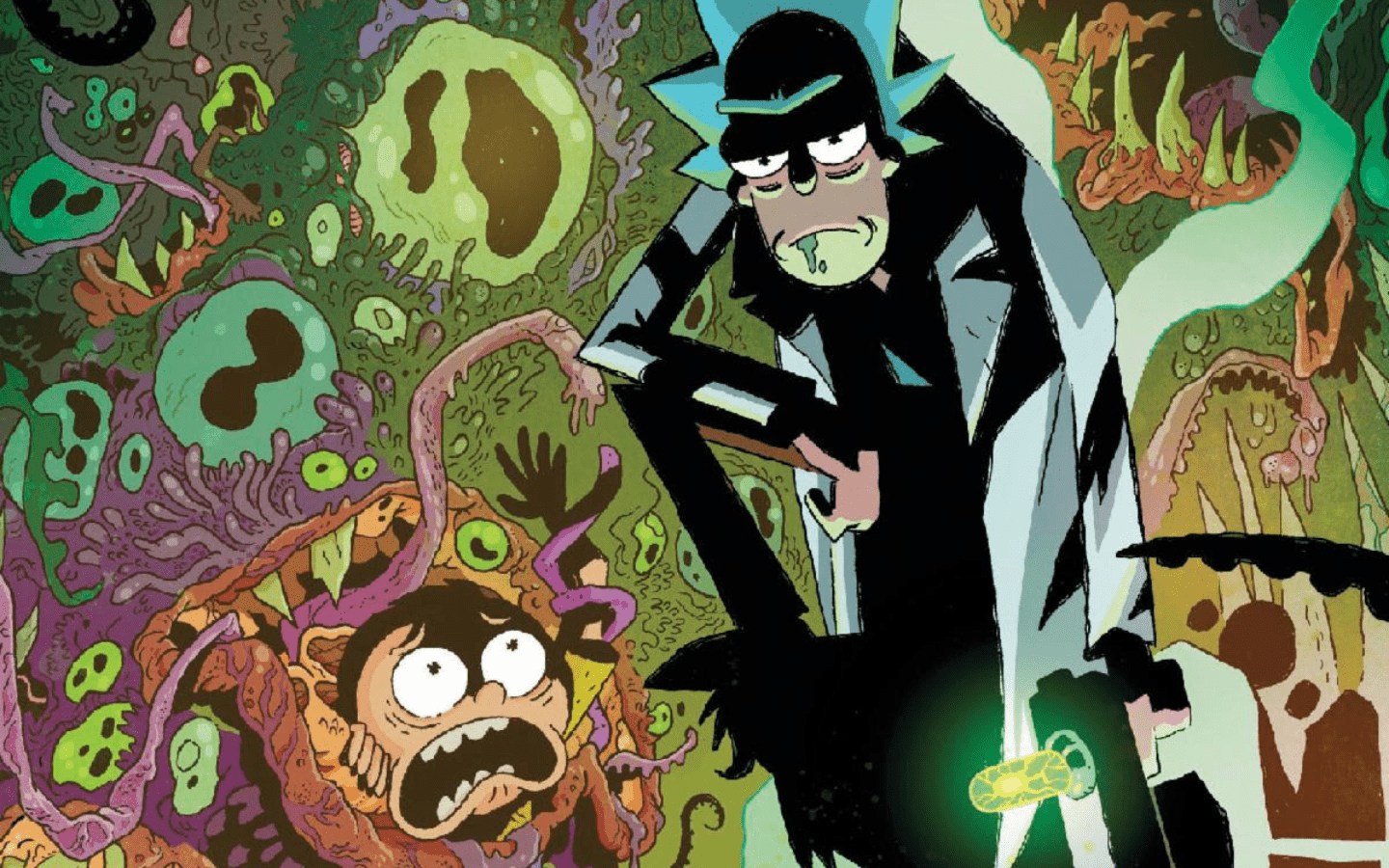 Rick and Morty Vs. Cthulhu Issue 1

Oni Press the official Adult Swim producer for all comics Rick and Morty, have decided to give us a much-needed storyline including Eldritch horror. Rick a notorious know-it-all with a hankering for a drink and Morty the timid but trying grandson partner up to fight off Cthulhu and by extension its creator. Rick and Morty Vs. Cthulhu issue 1 comes to the masses in December of 2022 and is chock full of great detail!

How do you translate such a high-energy show into a comic book? Isn’t printed medium slower and without all the panache? Oni Press shows us how well it can be done and if you visit their site, you’ll see that they have 5 pages of comic book volumes making that argument all the more tangible. Some would argue that being a fan of the show requires a certain affinity for the sciences, some that you have to have an appreciation of the crass, and me, I say, if you tune in and drop out of the day-to-day, you’ll find something to your liking.

Adult Swim property Rick and Morty has captured and captivated its audience with sciences belonging to the intergalactic and far off, to current space and Earth sciences, and hosted a plethora of cameos ranging from music’s Logic to comedy central and horror entrants Key and Peele. However, you can’t have exploding ecosystems and expletive-encrusted dialogues at full volume, all the time. Thankfully the partnership with Oni Press ensures you can have your fix addressed without disturbing too much of the world around you.

RELATED: ‘Rick and Morty’ Anime In The Works From Adult Swim

If you’ve tuned into Cartoon Network for the past two decades (happy belated 21st to them by the way!) then you’ve seen the influx of cartoons made for a more adult audience. With focuses on themes that require a more mature contemplation, a language that can be harsh when unfiltered, and inclusions of much grander violence. With that in mind, the majority of these elements see Adult Swim producing humorous, fun-to-watch shows, that keep us coming back for more.

Rick and Morty is arguably one of their crowned achievements but there are plenty of other properties that take us that are widely appreciated. They were able to pick the show up and get Dan Harmon and Justin Roiland started nine years ago which has birthed 6 seasons of lunacy, traveling all manner of galaxies and main character endings. This has lent the property to seeing video games, video game cameos, cartoon cameos, and even more writing for Dan and Justin. So if Rick and Morty Vs. Cthulhu was an episode we’d expect big things, can Oni Press deliver?

Perhaps you aren’t so gravitated to motion animation of your art but are aligned with it in print or digitally paneled. If so, then Oni Press has most likely been discussed within the areas you find your eyes connected to said art. Established in 1997, they are an established veteran in the comic/graphic novel realm. To say they are well-reputed would not do them justice, as the keys for Rick and Morty and other large established brands were turned over to them, and with multiple volumes of each, it’s safe to say you’re in good hands especially if you are wanting to see how Rick and Morty do on print/digital page.

Oni Press is sure to tickle your fancy regardless of the comic book, storyline, or art style you are into. They are proud publishers of Aggretsuko, Invader Zim, and Scott Pilgrim works, to name a few. With this diversity on their plate and that body of work in production, you can easily be assured you’re getting a quality product no matter what you are looking at. With that established, how does Rick and Morty Vs. Cthulhu turn out?

Rick and Morty Vs. Cthulhu Explored

To start from the start – Rick and Morty may go several places within their episodes but there are so many things to unpack from its intro alone. One of the running items we’ve seen is Rick and Morty running from Cthulhu themself, so this helps us address Rick and Morty Vs. Cthulhu. There’s safety in noting that nothing is sacred or off-limits for Rick and Morty, except maybe the idea that true love can happen for all of us, but that’s a topic for another time. Within the comic, we see the art style we’ve come to know and love for this series, Rick with his trademark “drool” and Morty having many “derp”-ish faces throughout.

Their dialogue also doesn’t miss any steps as Rick inserts himself as the resident expert in everything possible and everyone else is forced to go along with whatever he schemes. The intro starts off sweetly enough but swiftly sours into a gun-toting Sanchez-Smith family adventure going into the Lovecraftian galaxy. Rick and Morty Vs. Cthulhu has depictions of H.P.’s creations made with astounding descriptions, the artwork stays true to Rick and Morty’s style while allowing Lovecraft‘s abominations to quarter in their realm.

The first episode captured the requisite humor, explosivity, and energy of conversation from early on. The way they were able to write in Cthulhu’s brothers, sisters, or whatever we call its family members were not leaving the rails, but clearly unhinged (in a good way). Rick and Morty clearly have to take care of Cthulhu, but to do so they’re going to need to attack it from its starting point.

This comic takes us to a few dark and drab locations of H.P.’s initial locations and gives it the rough and ruckus Rick Sanchez approach we appreciate. There are plenty of twists within this first look and it leaves us needing a follow-up to ensure we get the full story. Rick and Morty Vs. Cthulhu is definitely an ideal addition to the Canon (or non-canon) of this intellectual property.

Have You Read Rick And Morty Comic Books?

Are you excited to read Rick and Morty Vs. Cthulhu Issue 1? Let us know what you think on social media!