Robocop (1987): A Dystopian Future Is Closer Than We Think

Dystopian sci-fi stories like Robocop create discomfort not because of the violence within them but because of how close those futures are. 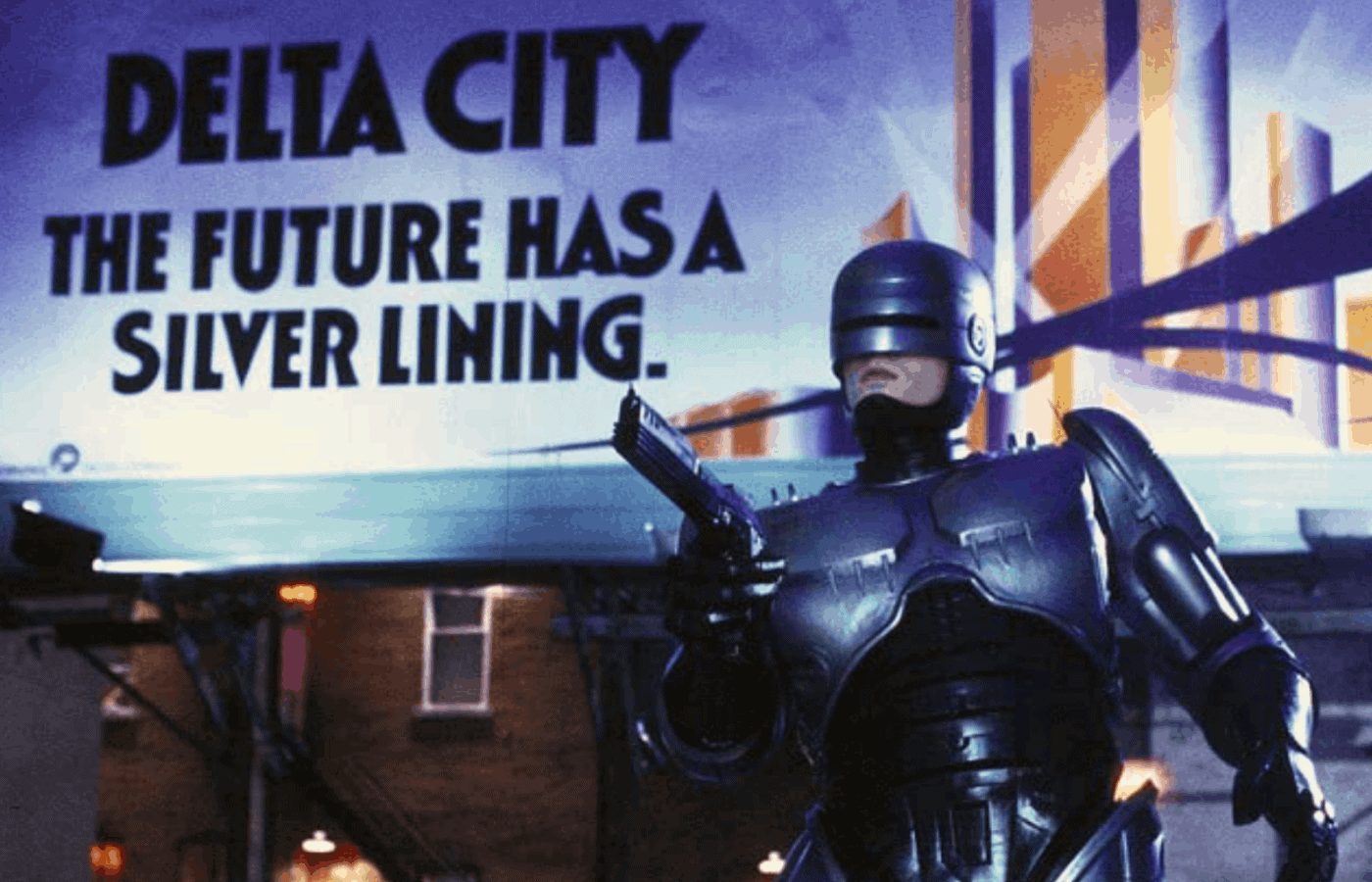 Dystopia and sci-fi go hand in hand like haunted houses and horror. By modern standards it’s cliche, but the stories and themes deriving from dystopian science fiction are endless. Dystopian sci-fi stories get to ask existential questions in a setting used as a cautionary tale. If you look at the genesis of the dystopian sub-genre, they’re told mainly within the science fiction genre. We have H. G. Wells‘ The Time Machine in 1895, followed by Yevgeny Zamyatin’s We in 1920, Aldous Huxley‘s Brave New World in 1932, and George Orwell‘s 1984 released in 1949.

As you can see, the sub-genre began to boom given the current state of the world. Both World Wars were fresh in many people’s minds as these new authors began giving life to possible futures full of totalitarian regimes and their control over the media and people.

After reading this definition, we see how clearly George Orwell gives a great example of a dystopia in 1984. He uses the premise of Big Brother, the leader of Oceania, to demonstrate how propaganda can instill fear within a community.

“Big Brother is Watching You.”

Experiencing Hitler’s grasp on his subordinates and Germany, Orwell took account of the totalitarianism at hand. As an outsider looking in, he saw the Nazi propaganda floating around and how Hitler came close to his desires. As I mentioned, 1984 was released in 1949. This was 10 years after Robocop‘s director Paul Verhoeven‘s birth.

World War II and its consequences were prominent in Paul Verhoeven’s formative years. Violence was in his upbringing. Propaganda was burned into the Dutch director’s mind. It’s no wonder some of Verhoeven’s American films utilize the style of propaganda as a form of social satire.

Just like George Orwell, Paul Verhoeven was an outsider looking in when making his American sci-fi hits Robocop, Total Recall, and Starship Troopers. Verhoeven’s past is an influence on his taste for hyper-violent films where every bullet and death is felt.

But what is it about the societies in Robocop, or other communities in his dystopian sci-fi films, that makes audiences so uncomfortable? Dystopian stories create discomfort not because of the violence within them but because of how close those futures are.

Robocop was written by Edward Neumeier and Michael Miner during the late ’70s and early ’80s. It’s the surge of many famous sci-fi hits involving cyborgs or AIs like The Terminator, Blade Runner, and Alien. Each of these films tackles the question of how much power should we give to the up-and-coming technology.

As these films dig into possible futures, we see that AIs and the technology behind them should be monitored. They’re cautionary tales of a future of cyborgs fighting back against their creators, or worse, corporations feeding off this technology to make their pockets grow as the community around them dwindles into a small speck of hopelessness.

We enter the world of Robocop through the brilliant usage of commercials that both criticize Americans in 1980 and engage in world-building around the future of Old Detroit. These are glimpses into how their media coverage manipulates public ideas and opinions. The commercials are masterfully done as they happen through the beginning of each act in the film.

You give us three minutes. We give you the world.

It says it all.

Within the first batch and act of the film, one of the commercials sticks out. We see first-hand how the government doesn’t care about the common person and their needs. Just greed flowing through the veins of the system.

After clips of chaos and political information, the next thirty seconds is a commercial dedicated to this government’s manipulation. We see a clean hospital with a caring middle-aged doctor. A patient just released out of heart surgery with a smile on his face. And the doctor’s first words being about the most important decision of your life.

The Family Heart Center offers heart transfers designed by major corporations like Yamaha. There’s no need to worry if you can’t afford it, as there are options. Extended warranties, financing, and qualifying tax credit are all offered with a new heart. Because at The Family Heart Center-

In the third act, another news’ segment within the commercial break springs out at the audience. This act break is all about the chaos in the world. We see over 113 people dead, and among them are two former presidents. Santa Barbara is torched by a misfiring in the Peace Defense Space Ship, the same ship the president was in at the beginning of the film. And most importantly we learn that a police strike is on the rise as the police argue against OCP.

You can see how well OCP has a grasp on media coverage and politics within the system. When announcing the negotiations between OCP and the police, the news media interviews two people. The first, who looks like a middle-aged respectable “home-owner,” claims police are public service with job security. While looking deadpan into the camera he states,

They are not supposed to strike.

This interview is followed by the opposing view. The interviewer finds an unemployed man. He’s dirty and shaggy. His response is more unprofessional.

It’s a free society. Except there ain’t nothing free. No guarantee. You’re on your own. It’s the law of the jungle.

OCP, abbreviated from Omni Consumer Products, is a mega-corporation that has begun developing new technology for sale in the military and security sectors. It’s run by older executives, but the yuppies (young business men with well paying jobs and fashionable lifestyles) want nothing but power and status as they try to gain control.  The older executives fight to maintain their grasp of that power. The common people are stuck in the middle of the crossfire.

You have insulted me and you have insulted the company with that bastard creation of yours. I had a guaranteed military sale with ED 209! Renovation program. Spare parts for 25 years. Who cares if it worked or not?

A corporation led by people with only profit and self-interest in mind is something that we can relate to today. OCP’s hope is to tear down Old Detroit and replace it with a utopia called Delta City. A new city with promising rewards. Dick Jones, played by Ronny Cox, wants ED 209 as the heart of the new city’s primary security force. While Morton, a yuppie played by Miguel Ferrer, still wants this new security force to be technologically-based, he also wants to infuse this technological solution with humanity.

Dick Jones’ vision is still a modern concept. Although extremely exaggerated in this film, his underlying desire is militarism. Though, what is militarism?

The belief or desire of a government or people that a country should maintain a strong military capability and be prepared to use it aggressively to defend or promote national interests.

In the land of private ownership controlled by capitalism and corporations, there’s only one savior. The brilliance behind Paul Verhoeven’s directorial view is how he manages to attack 1980’s American society as well as question human life. At what point do we cross ethical borders and begin playing God? It’s no secret that Verhoeven uses religious imagery when portraying Robocop.

In the beginning of the second act we get more satirical commercials and news segments. One of them being about Robocop.

Robocop. Who is he? What is he? Where does he come from?

This cyborg is an American Jesus toting a gun. The newsreel in question begins to show how Robocop, played by Peter Weller, is the contemporary savior. We see him at an elementary school surrounded by a group of children, all of them touching his sleek shining metal and reaching for ”his cloak.” This is reminiscent to a verse in the Bible where a woman hemorrhaging for twelve years believes,

If I just touch His garments, I will get well.

In the film’s case, the youngest generation, and therefore, the future, is being saved by Robocop. And how is this known? During the clip, Robocop is asked to say a few words to the kids not able to witness this miraculous encounter first-hand. His response, expressionless and intimidating, is both a warning and a caution to “stay out of trouble.”

We are also given examples of multiple crucifictions throughout his film. Alex Murphy’s hand is blown off by Clarence, played by Kurtwood Smith, and his goons. As he gets shot, Murphy’s arms are placed outward, mimicking Jesus on the cross. Once Murphy is transformed into Robocop, he gets his side pierced with a stake by Clarence at the end of the film. As we witness the rebirth of the American Jesus again and again, Verhoeven plays with more questions through his dystopian future.

As Robocop discovers his identity, another major trope still found in contemporary sci-fi dystopian futures like Divergent, he fights back against the corporation that fabricated him. He fights against greed, capitalism, and the dystopian society. This dystopia is a future that America deserves, according to Paul Verhoeven. A future that – terrifyingly-  isn’t that far off. But is this a society that all Americans deserve?