From the mind of George Romero comes a story too grand for celluloid and, thanks to author Daniel Kraus, the dead walk again! 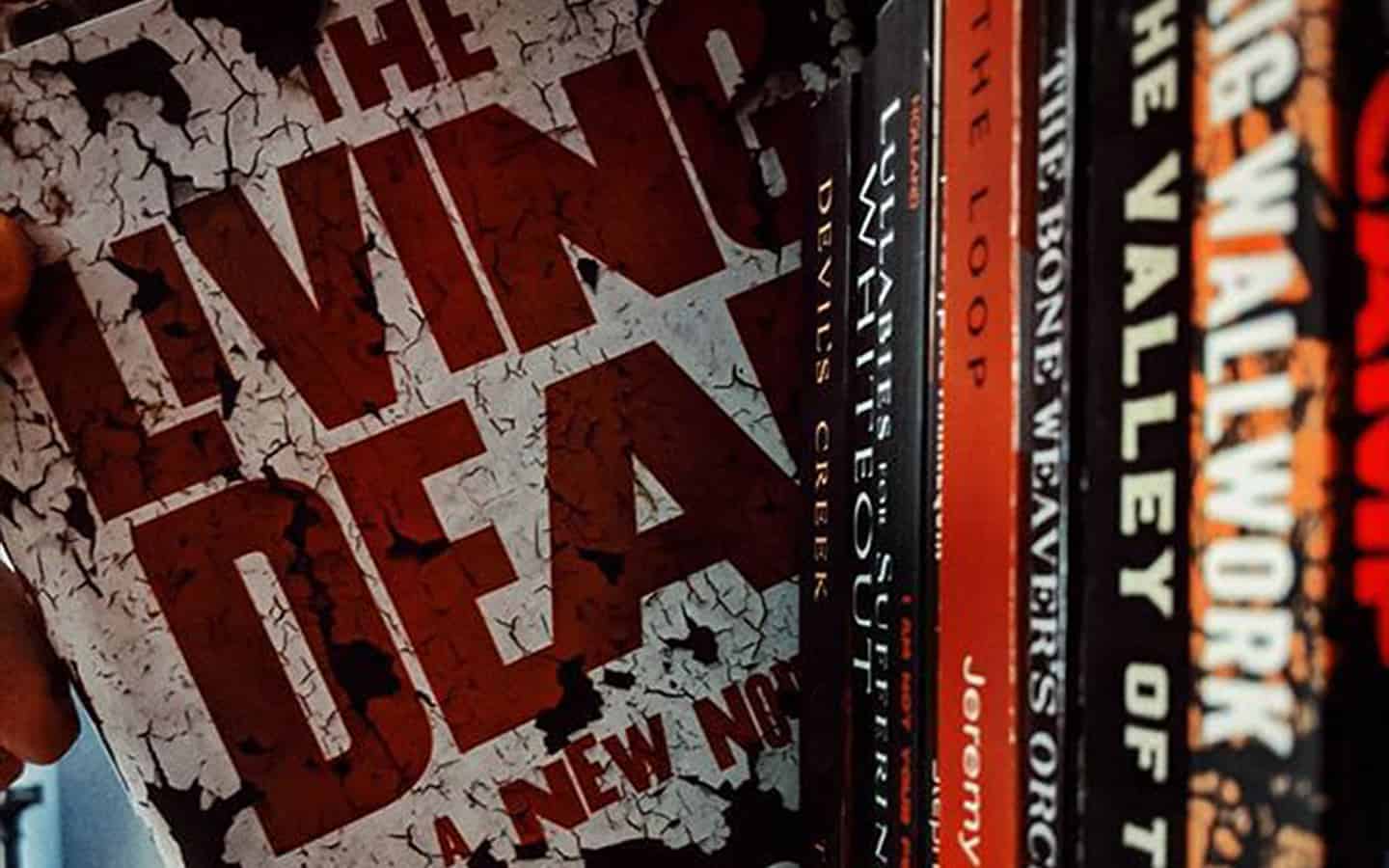 The Living Dead is a new novel that expands on George A. Romero’s universe and his legacy with help from acclaimed author Daniel Kraus.

When George A. Romero passed away in 2017, many of us mourned the loss of a hero. Once the shock wore off, there was the realization that no new stories would come from the man that had brought the world the modern zombie and much more. Last year we were surprised and excited by the recovery of a lost gem; the short commissioned film from 1973, The Amusement Park, had surfaced in the vaults and was restored for release. Today, Romero devotees have yet another reason to rejoice. Now we have an epic from the mind of the maestro that was too grand for celluloid and, thanks to author Daniel Kraus, the dead walk again!

The story of how the book The Living Dead came to be is almost as epic as the story inside. Some of you may recall that over the years in interviews that Romero would mention that he was toying with the idea of writing a novel. Prose would open up a world of possibilities for an artist that was constantly held back and constrained by the powers that be in Hollywood. In the excellent afterward by the co-author, the reader gets the full understanding of just how many projects failed to get off the ground for Romero. His name had been attached to dozens of films that never came to fruition, for one reason or another.

On top of that, you may recall the stories of scripts that had to be completely re-written due to budgetary restraints. Romero dreamed big, but unfortunately, his financers were not always on board for the long haul. One would be remiss to not mention the man’s desire to branch out from the boundaries of horror. Of course, the albatross around his neck was his own invention of the modern zombie, which in the end, were the only films he could get backing to make. The written word would help to loosen some of those restraints and he could tell an epic story that would be his definitive tale of the zombie uprising.

After his passing, Romero’s widow, Suzanne, started sorting through what was left behind. As she started to build an archive of un-made screenplays and treatments, she knew that the main project left to finish was the novel Romero had been working on for the past decade. At this point, she turned to manager Chris Roe to discuss who they could approach to take on this daunting task. The person they decided to contact was author Daniel Kraus who not only had quite a body of work of his own but had also collaborated twice with filmmaker Guillermo Del Toro (on both Trollhunters and the award-winning Shape of Water). Roe had grown up with Kraus and the two had reconnected about twelve years before when Kraus read in an article that Roe was the manager of his favorite filmmaker, George A. Romero.

When Kraus was approached with the project, he eagerly took it on. Something that both Kraus and Romero had in common was that neither man would claim to be a fan of horror as a genre. They are both fans of film and good storytelling, but neither would brand themselves a devotee of the genre. In fact, Kraus says he was not a fan of horror or even just zombies, but a fan of George Romero movies. This fact helps to broaden not only his scope as an author but also his approach to the way he researched and prepared to help finish Romero’s book.

Kraus was given a document of what Romero had written so far. He found that this was not completely linear, but it did provide a look at a long timeline inhabited by a vast cast of characters. The story began with John Doe, the first case of the reanimated dead, and pointed towards the remaining pockets of humanity fifteen years later. The characters were spread out around the country and were diverse in scope. As Kraus prepared to finish the tale, he looked deep into everything he could find that revealed the man behind the films.

Yes, he re-watched Romero’s entire filmography and read all of his writings, but he also listened to countless interviews, commentary tracks as well as scouring analysis and scholarly writings on the man’s work. He also dove deep into the films that Romero loved to see what they revealed about the man. He had an extensive discussion with Suzanne Romero that helped him understand Romero’s beliefs and ideologies. Now that he knew the man better, he could start to embark on this journey with him.

As Kraus worked in Chicago on the novel, discoveries would continue to surface in Toronto as Suzanne and Roe continued to dig through what Romero had left behind. Chunks of story would reveal themselves periodically that Kraus would have to massage and re-work the project to encompass. Two big encounters were first, a comment online to the announcement of the book that eluded to a website Romero launched in 2000 that would give fans access to monthly chapters of a new book (which yielded 100 pages of new material) and second, a letter Romero had written that gave details of how he wanted the book to play out. Both times, Kraus would have to go back and figure out how these new elements affected the book, which was already becoming quite massive. In the end, the finished novel is a hefty tale that encompasses Romero’s ideas and his words, thanks in no small part to the work of Daniel Kraus.

The book is epic. It’s over 600 pages that break down into three acts. This is a tale as grand as Stephen King’s The Stand or Clive Barker’s The Great and Secret Show. The reader is introduced to a wonderful and diverse cast of characters whose stories all converge in the end at one of humanities last outposts. From a city morgue to a trailer park to a 24-hour newsroom and an aircraft carrier, we become attached to the people who fight to make it out alive. Much like Romero’s films, this story is not really about the zombies, it is about the survivors. We live with them through the most trying moments of their stories from the first few days of the outbreak, till fifteen years later to see what they have become. It is compelling and real. What we also learn this time is the perspective of the dead. We have glimpses inside the hive mind as characters cross over. We see not just humanities de-evolution, but the rise of the zombie as well.

Kraus’ vast knowledge of Romero’s films and the man he was informs the novel in unique ways. The more I learned about the process and how much Kraus worked to ensure that Romero’s story was told, the more that I appreciated Kraus and realized he was the right person for the job. As a reader and a fan, I appreciate how the entire book has a sole voice, which is hard to achieve normally when multiple authors collaborate, but even more challenging when one person can only communicate through the things he has written and said in the past.

I was given the opportunity to not only read an advance copy of the book, but spend an hour with the author after I finished reading it. Personally, I am a huge fan of the world of George Romero, not just his Dead cycle of films. I think most people who follow my work understand this fact. Getting to talk to Kraus I realized that he put his heart and soul into making sure that the fans and connoisseurs see Romero shine throughout this novel. He selflessly dove in to make this experience part of not just the smaller world we have seen in Night, Dawn, Day, Land, Diary and Survival, but in the broader universe the man created. The book is full of hidden (and not so hidden) gems for those in the know, but also has the ability to work as a stand-alone story for someone new to the ghouls of George Romero.

In the end, I hope all fans of Romero, zombies, horror movies and horror literature give this book a read. You will find yourself swept up in the lives of the survivors to cheer them on through their victories and feel their pain during hardships. Like all good epic fiction, you may be intimidated by the number of pages when you begin, but will also be sad when the pages have run out at the end. You will learn about the man George Romero was and see his views on the world and where we are headed. Most of all, you will enjoy a great book as it was skillfully crafted together by co-author Daniel Kraus.

If you would like to hear my in-depth discussion with Daniel Kraus about The Living Dead novel and the films of George Romero, you can tune in to The Horror Academic on YouTube.