A non-existence has lead to Sarah Connor's life thus far and further illustrates that a dark fate befalls anyone who crosses paths with a Terminator. 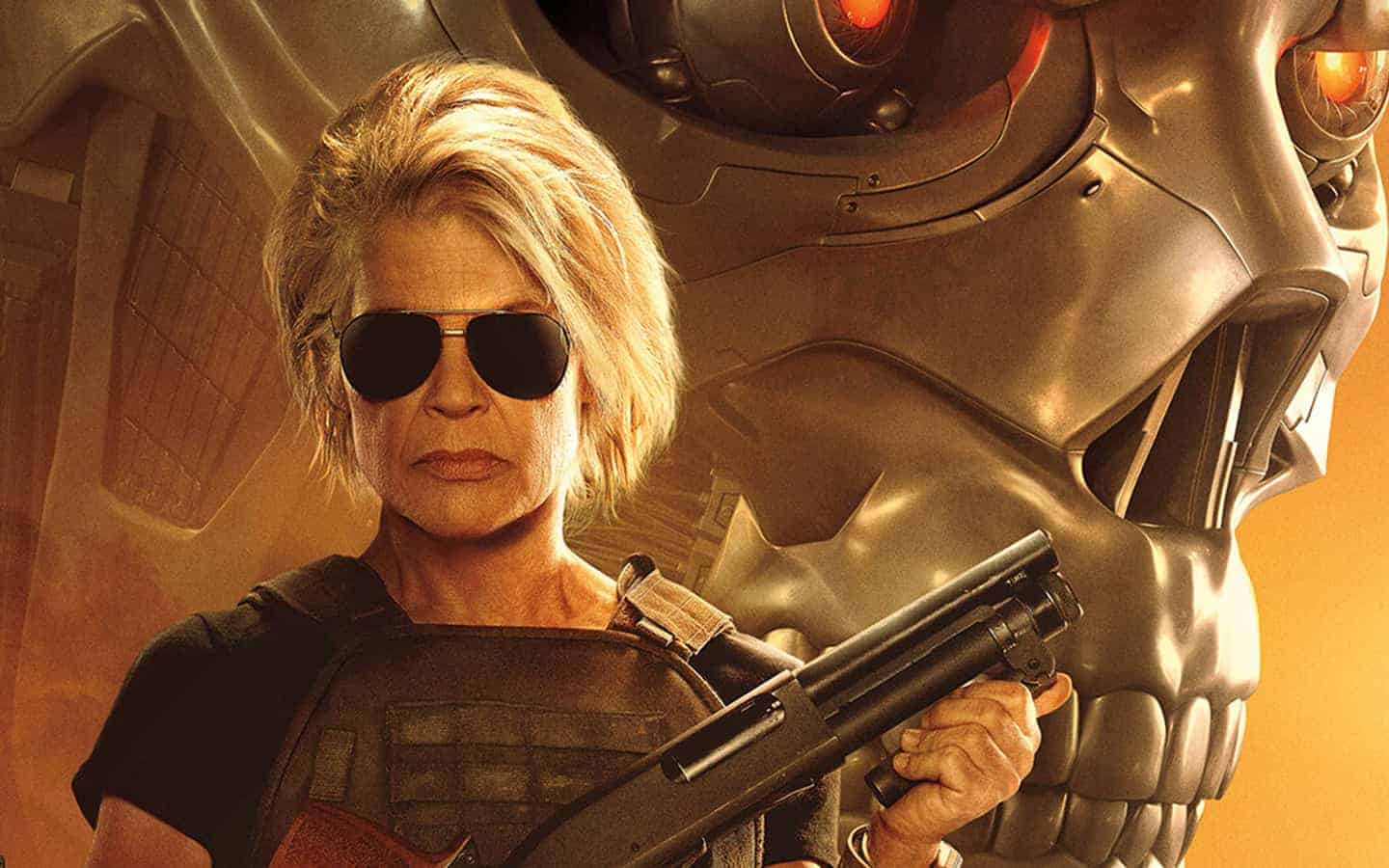 “I hunt Terminators and I drink until I black out“, Sarah Connor muses with unabashed frankness as the eyes of her newly forged allies and the audience are upon her. These moments in Terminator: Dark Fate exemplify the loneliness of knowing and the ramifications of that knowing. Being the only sane person is a trope in a film that can be used to intriguing narrative effect and the third chapter of Sarah’s story is no different.

Since the series began in the mid-1980s it’s always been steeped in the complete and utter eradication of normalcy and all that it entails. No families, no friends, and no companions. Literal non-existence has lead to this flinty-eyed Sarah Connor’s life thus far and further illustrates that a dark fate befalls anyone who crosses paths with a Terminator. If one lives long enough they’ll become a Sarah Connor (Linda Hamilton), an augmented Grace (Mackenzie Davis) super-soldier, or an admixture of Sarah and John Connor’s legacy via Dani Ramos (Natalia Reyes).

I think of the woman that Sarah Connor is now and the decades of post-traumatic stress she’s endured and how she’s forced herself to face her triggers voluntarily. I am fascinated by the stories of changed people and life-altering events that consume the individual. Grace the augmented soldier and Dani Ramos (the new Sarah Connor sans savior-child pregnancy) are now navigating the minefield that Sarah has trod her entire life.

Grace understands more than young Dani the threat and the danger of machines to be sure but has never experienced the isolation and world that labels one mentally deranged for knowing their existence. Grace is from a future where the robot’s existence is normal and fighting them is a regular occurrence to the point of mundanity.

Sarah in some respects is a relic in comparison, representing the past where she fought the threat alone, unaided and unheard. The mental and physical transformation that she’s undergone isn’t too dissimilar from Grace’s reinforced interior. The most pressing question that completely consumes my thoughts to the point of mental exhaustion at times is how does one exist knowing that existence is futile?

The world in which we live isn’t facing a SkyNet or Legion rogue artificial intelligence sort of threat; instead, we face the annihilation of our species due to climate change denial. Our environment is trying to terminate us. There’s a grim irony in that the machines that we created will long outlive us.

As of November, the film has just now made its budget back which does not bode well for a continuation of the original storyline and franchise. With a 150 to 200 million dollar budget, the actors-filmmakers-producers-writers, etcetera were all anticipating a higher opening weekend gross and overall domestic monetary haul.

The film finally ‘broke even’ as it were by its cumulative success at the international box office. This has been a consistent trend for the alternate-Terminator films that have been released post-Judgement Day. The series has indeed been plagued by diminishing returns to abysmal domestic release schedules which have only been buoyed by the international market.

Let me pivot back to the film for a moment because with solid special effects, beautiful stunt/action choreography, balanced pacing in the storytelling, and cinematography that pops if not explodes off the big screen…this was the film that deserved to be seen. Those ‘other’ Terminator films don’t exist in my timeline.

It’s a shame that more people didn’t see this third chapter and that the previous non-canonical installments soured the fervor for Terminator: Dark Fate because there was a lot of course correction undertaken and the story finally ran back to home base, back home to where the series has always been strongest, and back home to its kick-ass albeit reluctant protagonist Sarah Connor.

The Art of Survival

Why do you care, asks Grace (the augmented soldier from the future) with a mixture of intrigue and suspicion. Because I was her, replies Sarah Connor with a steely sort of exhaustion laced with resignation. No matter what Sarah does, Dani Ramos does, or any future iteration of a savior of the human species does the future is doomed (unless we radically change our relationship with technology and capitalism, but that’s a conversation for a different essay).

It’s quiet moments like these where Dani and Grace try and sometimes fail to understand the enigma that is Sarah’s life interwoven throughout particular story beats in the film that reiterate that there’s nothing glamorous or swashbuckling about the life that Sarah has been forced to live. From the blatant text about Sarah’s drug use to the point of unconsciousness to the eyes that are red-rimmed with tears no longer shed (especially after Terminator-Carl reappears in her life who killed her son John in this timeline). I realized why Sarah’s physical actions or inactions emotionally were so familiar to me.

Sarah has and is constantly battling suicidal ideations. She’s constantly forcing her life to have meaning or grander purpose. If Sarah wasn’t off terminating Terminators after her son’s death, I’m frightened about what her fate would have been. Remember the question that I posed previously, how does one exist knowing that existence is futile?

I’ve personally worked out to the point of physical exhaustion just so I wouldn’t have to engage with a crucial life issue or detached from situations emotionally just so I wouldn’t have to engage physically. For those of us who have experienced depression and its various highs and lows and had no safety net to catch us, Sarah Connor’s cinematic journey resonates as few films have. Despite our best efforts to appear normal or human, there’s a robot-icism that oftentimes slips into our speech, motor functions, and engagement with each other. There’s a fear that we are becoming something unfeeling or monstrous to survive and to cope.

For Sarah, it’s the machines that are the harbingers of doom. In the real world its debt, environmental collapse, racism, poverty, and so many other societal ills could be fixed if there was a radical transformation in consciousness about what humans need versus desire and realizing our fullest potential by rejecting our most primitive impulses.

Again and again, Sarah Connor tried to warn anyone she could about our impending destruction and for all that it accomplished was like screaming into the wind. Clearly, like Terminator: Dark Fate demonstrates Sarah Connor stopped screaming and started scouring any Terminators she could find. It was sobering to realize that anyone Sarah had ever known never existed or was terminated from existence. The sixty-plus years she’s achieved have been hard wrung from constant battle, strategy, and pushing her body to its physical limit.

Her body has literally become a finely tuned machine with souvenirs and assets incalculable. Linda Hamilton’s performance as Sarah Connor has always been worth watching but this latest film enraptured me in a different way than the previous chapters of her story. It is so very rare to see women age in film organically, especially in or within the realm of their own film franchise(s).

Besides the Alien series of films with Sigourney Weaver that started in the late 1970s and ended in the late 1990s, it’s a very short to nonexistent list indeed helmed by a woman’s (action, science fiction, or horror) journey. I’d be remiss if I didn’t mention how beautiful the bodies were in this film, well at least the juxtaposition of Grace’s cybernetically enhanced physique versus Sarah’s.

They both represent a peak of physical fitness and muscularity that is oftentimes softened for the gaze of the audience. Parcel out the politics of whose gaze is lingering on women the most in your own time, but I digress. One is a soldier by occupation and the other is a warrior by training, or is it vice versa, or perhaps both? The point is I gasped and swooned when I saw the initial trailers for this film months ago. A huge thank you to Slate’s Christina Cauterucci for exploring Terminator: Dark Fate’s queer metatextual to subtextual reading. That was an insightful treat!

What more can I say about the film that many haven’t seen? Hmmm…well, the new REV-9 Terminator model was really something to watch. Whoo-boy that exoskeleton and liquid-metal working in tandem was something, huh? The way it weaponizes normalcy and mimics human behavior is even more chilling in this film than any of the previous I’ve ever seen. There’s always a tell that gives the other Terminator models away such as an off inflection of voice, a peculiar mannerism, a chilling silence, a piercing stare, etc. This is the most human inhumane Terminator yet.

What’s always fascinated me about the Terminator is its similarities to psychopathic or sociopathic actual human behavior and how a mask of pleasantness can so easily slip into malevolence or outright violence. The scenes with Dani Ramos being placed in a detention facility along the Mexican-American border were unexpected and chilling; definitely a triggering scene for many I’m sure. There wasn’t a lot of excess chatter in this film, as is common from the original series, and every word or witty comment seemed appropriate and never overstayed its welcome.

Oh goodness, where are my manners? I’ve been blathering on and on about my fave Sarah Connor but neglected to mention how wicked Grace’s cybernetics look and function. She’s been lacerated and stitched in an intricate pattern from head to toe with wiring, implants, and an internal battery akin to her foes the Terminators except she can run down and shut down without the proper amount of medications to keep her body stabilized and food metabolized to keep her systems balanced. I exclaimed quietly in the theater, finally a true REALISTIC cyborg!

My Dad (bless his Star Trek loving heart) and I have had nerdy sci-fi discussions aplenty about the ramifications of having robotic bodily enhancements, especially those that increase your strength, speed, etc. A surgeon would have to take a limb and it’s surrounding musculature and balance it out to the rest of the body or the body’s strength would have to match that of the new artificial enhancement. The doctors of the past were in awe of Grace’s new body—prior to her immobilizing them all in less than five seconds—and so was I.

In conclusion, shout out to my childhood nostalgia for allowing me to re-examine Sarah Connor’s life (and workout routine) with mature eyes, an engaging cast of characters that kept me interested throughout its entire runtime, and the fanfiction that will sustain me in case the franchise is (officially) terminated.

What is Terminator: Dark Fate About?

A newly modified liquid Terminator, known as the Rev-9 – arrives from the future to kill Dani Ramos (Natalia Reyes). Also sent back in time is Grace (Mackenzie Davis), a hybrid cyborg human who must protect Ramos from the seemingly indestructible robot. The two women soon find some much-needed help from a pair of unexpected allies – seasoned warrior Sarah Connor (Linda Hamilton) and the T-800 Terminator (Arnold Schwarzenegger).