Daniel Erickson’s Scary Movie and the Balancing Act of Subversion

1991's psychological slasher Scary Movie is regional-horror at its best - but is it too clever for its own good? 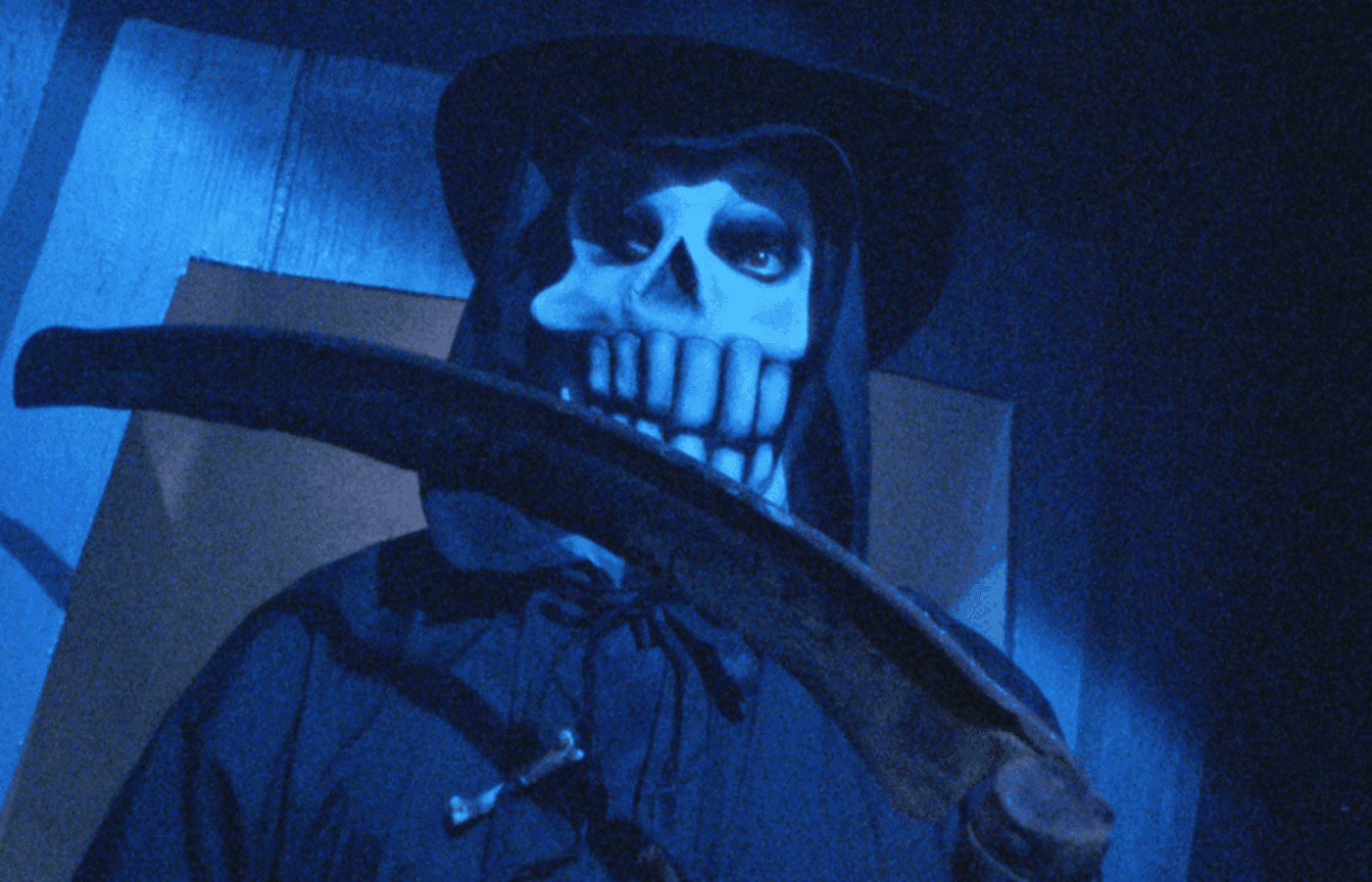 1991’s psychological slasher Scary Movie is regional-horror at its best- but is it too clever for its own good?

Any horror fan can tell you that one of the great experiences of horror fandom is the discovery of films that feel like hidden gems. Finding a film that has the elements of a classic, but has somehow been forgotten by time is an exciting, often joyous experience. It makes us horror fans in particular feel like we’re ahead of the curve in discovering something worthwhile. It makes it even more thrilling when the opportunity arises to share that film with others, or talk with someone who’s already seen it.

It is for that reason that one of my biggest passions in horror is seeking out regional horror films, i.e. horror films that were made throughout the United States in areas far removed from any commercial filmmaking hub.

I even bought a book about this specific topic so that I could find more films like this, films with the potential to be hidden gems, or directors with the potential to be the next John Waters or George Romero. Even if I didn’t have this book, I’d be in luck, because every day boutique home video brands such as Severin, Vinegar Syndrome, and American Genre Film Archive make it easier to find these rare gems, and in terrific quality to boot.

By releasing these lesser seen films from all across the world in increasingly higher video and audio quality, there is now greater opportunity to see the unique visions of horror made from people removed from the mainstream movements that have emerged throughout horror history.

Scary Movie stars future Academy Award nominee John Hawkes as Warren, a buttoned-up scaredy cat of the first order, who is introduced to the audience having a nightmare that bizarrely anticipates future moments in the film, despite the fact that no other scene shows Warren to be psychic.

In fact, very few scenes in the film show Warren to be anything except nervous and paranoid, something like Charlie Brewster from Fright Night dialed up to eleven, barely able to focus on any stimulus without descending into anxiety. Truthfully, the most apt comparison would be a genuine cat since, while writing this, I attempted to get my cat’s attention and, upon making eye contact with him, he ran away in fear. Warren is not very different from that, and he’s barely even verbal for much of the film’s runtime.

The plot revolves around Warren and his friends waiting in line on Halloween to enter a haunted house. Concurrently, the town sheriff hears that an escaped lunatic, John Louis Barker, is on the loose.

Scary Movie catches horror at an important moment; as the slasher gives way to the meta.

The plot itself isn’t all that special, and it would seem that is partially by design, as the film seems designed to put as much of the film’s action in quotations as possible. The production company is called Generic Films Ltd., the title of the film is deliberately bland and comes accompanied with a barcode when it’s shown onscreen (likening the film to an assembly line product), and, by having the action revolve around a haunted house on Halloween, much of the actual horror is in quotes too, since it might genuinely just be part of the show being put on.

It’s a common refrain nowadays to say that anything meta made before 1996 is, in some sense, “proto-Scream,” and I don’t think the description is disingenuous here. Scary Movie does parody slasher film aesthetics, as well as the neon aesthetics of 1980s horror as a whole, and it borrows its escaped lunatic angle from the original Halloween, while also seeming aware that, by 1991, this angle had already been borrowed by numerous slasher films (Blood Rage, Offerings, etc.).

The film is loaded with fake-out scares, mostly from the haunted house and its numerous attractions, but also from some of the costumed people waiting in line for the haunted house. Each of them freaking out Warren and making him more unsettled.

The film peppers itself with these fake-out scares in order to put the audience in the same state of mind as Warren: everything around him is potentially dangerous and frightening. The film seems like it’s prepping the audience for a heroic moment for Warren, where he can triumph over both his fears and the lunatic who is pursuing him and in the process he can impress his friends, best his bullies, and get the girl (in this case, Barbara, played by Suzanne Aldrich).

Scary Movie is By-the-Books Horror, Until it Isn’t

What makes Scary Movie different from Scream, and what makes the film potentially divisive in general is its climax. (SPOILERS AHEAD for the ending of the film).

After Warren has found himself trapped in the haunted house with John Louis Barker hot on his tail, he finally finds a gun and, when Barker is right behind him, Warren manages to shoot him, putting an end to his night of horror.

The first time I watched the film, I found this scene frustrating. I felt somewhat cheated, especially since the film has a terrific, creepy atmosphere and is very well-directed overall. As a big fan of Halloween, I was truthfully more excited at the prospect that, while Scary Movie seemed like a clear rip-off of Halloween, it was at least a well-executed and effective one. Thus, when the film really turned out to be about the dangers of paranoia, and how quickly paranoia can turn to delusion, I was disappointed.

The Twist That Keeps on Givin’

Scary Movie‘s twist may be initially disappointing, but it adds layers to a second viewing, and the film plays a lot better for it. There are still oddities that don’t quite add up (especially an early scene where a boy sees something in a barn that is left deliberately vague, and never fully answered), but you also see how deliberately director Daniel Erickson makes Warren seem off, even beyond his status as a scaredy cat.

As mentioned above, Warren seems to have a difficult time saying or doing anything, seeming at all times paralyzed with fear. In one scene, when a group of bullies harass Warren and eventually stab him (albeit with a fake knife), Warren reacts with true pain, as if he’s really been stabbed, an early sign that Warren is already willing to buy into any experience he as, viewing everything has fact even when it’s so obviously a fabrication.

The direction in Scary Movie adds to this as well throughout the film, framing the attractions inside the haunted house as seriously as possible, making them authentically creepy and only questioning their authenticity once a moment of horror has already come and gone. Erickson is comfortable fooling and faking out the audience, trying to make the audience feel what Warren feels, but it’s in smaller, eerier moments that the film portends its conclusion.

One such instance is that initial nightmare sequence that starts the film, which showcases the absurd Grim Reaper costume that haunts Warren in his mind, a costume that does eventually show up worn by a haunted house worker, in an absurd and, ultimately, creepy twist. The dream sequence primes the audience that Warren is easily frightened, but also, on second viewing, sets up the idea that Warren is, in some way, anticipating and looking for this haunted house experience to go wrong.

There is, also, a recurring image in the haunted house of a Black Mass setting, complete with goat skulls and pentagrams, that is always shown in more natural lighting than the rest of the house, suggesting that it is somehow more “real” than the other attractions of the house.

This could be a reference to the Satanic Panic that gripped America throughout the 80s as fear of satanic cults and ritualistic murders was on the rise, or it could allude to the idea that there is some force manipulating Warren into committing these actions. While I feel that the force manipulating Warren is simply his paranoia, there is the possibility that it may be some other force, and the creepiness and general sense of something being off throughout the film enforces this.

While Scary Movie has an obvious sense of humor, its lingering creepiness is real and palpable.

Take Warren, for example. Warren seems off, even outside of his paranoia. When he kisses Barbara, it is conceivably the most uncomfortable kiss in the entire history of cinema, with Warren’s eyes wide during the entire lead up and his lips only really touching Barbara’s top lip, and she is so obviously disinterested that she yawns loudly right after the kiss finishes.

Elsewhere in the film, when Warren is accosted by a haunted horse worker who thinks he’s fooling around, Warren simply replies, “I’m not feeling very well” with very little affectation.

The eeriest moment, perhaps, is the moment where the cops ask Warren what happened inside the haunted house and Warren keeps replying that “he kept coming after me, he wouldn’t stop.” That Warren refuses to elaborate or give any clarifying details about what happened, not even mentioning John Louis Barker, should be a tip off that things didn’t go the way he imagined them.

The discovery of the sheriff’s dead body, and the apparent “lunatic” being found picking flowers in a near catatonic state not far from the initial accident that caused his “escape” only make it clearer that Warren has snapped. In the final moments, it seems that Warren still thinks he’s the hero of this story, making the ending tragic and frightening in a more harshly realistic mode than the rest of the film.

(Additionally, if one picks up the AGFA blu-ray release of the film, this writer encourages one to check out the short film Mr. Pumpkin that comes as a bonus feature, which further displays Daniel Erickson’s preoccupation with how our fear can create horrors in our mind, and how those horrors can spill out in unexpected ways).

Scary Movie is an ideal regional horror find: a clever little film that is well-executed and comfortably a product of its setting (check out the sign that says “Abandon Hope All Y’all Who Enter,” and the soundtrack featuring classic Texas artists like Roky Erickson and Butthole Surfers). It’s not perfect, and one can’t help but feel a bit cheated by its climax, but it does show intelligence and care in its construction. John Hawkes’ committed, and occasionally frustrating, performance ties it all together to make it a charming film perfect for the Halloween season.