Shadow and Bone Review (2021): A Fantasy About Potential that Gambles Its Own

Shadow and Bone work best in its quiet moments of human connection, the ego battle of realizing your own potential, and boundless loyalty between friends. 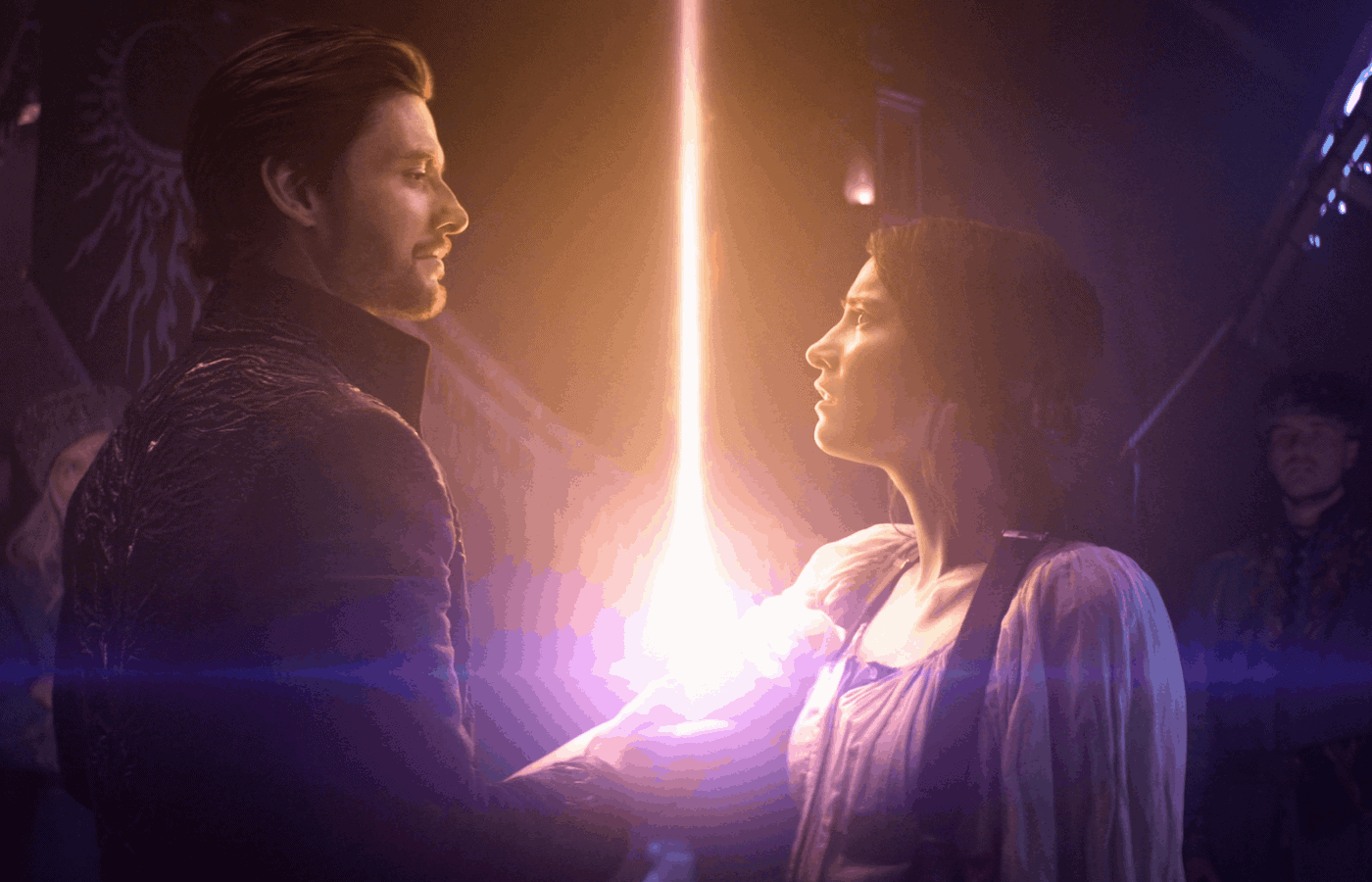 Shadow and Bone work best in its quiet moments of human connection, the ego battle of realizing your own potential, and boundless loyalty between friends.

Book adaptations are a risky, tricky game. In the case of a series, the showrunner and writers are tasked with both satisfying the book’s fans and winning over a new general audience. In the case of Shadow and Bone, Netflix’s take on Leigh Bardugo’s beloved Grishaverse series, the formula emulates a Game of Thrones-style fantasy that never quite finds its own footing but still manages to entertain.

In the fictional and war-torn land of Ravka, a centuries-old curse called the Shadow Fold separates the country into two. The Fold is a dark passage filled with monsters called volcra. When Alina Starkov (Jessie Mei Li), a cartographer for the king’s army, purposely enters the Fold so as not to be separated from her soldier best friend Mal (Archie Renaux), the course of their lives and the fate of Ravka changes forever. It is discovered that Alina is not only a type of mage called Grisha; she is also a prophesied saint whose life’s purpose is to destroy the Fold.

Introducing a fantastical world in forty-five minutes proves difficult for lead writer and showrunner Eric Heisserer, the Oscar-nominated pen behind Arrival. The first episode of Shadow and Bone is clunky and overstuffed with world-building, despite its attention-grabbing flash, and watching it feels a bit like a chore. We are shuffled to and from countless character introductions, which is tiring enough to give pause before continuing.

However, anyone who makes it through the cramped premiere will find a fun journey with endearing characters throughout the following eight episodes. Particularly fun is the B-plot, which centers on a group of con artists called the Crows, a band of three wily characters on a job to kidnap Alina. Their chemistry creates the most entertaining segments, such as a heist scene comparable to a fantastical James Bond. In particular, Kit Young delivers a standout performance as Jesper, a witty and skilled sharpshooter.

It’s also notable that the show’s most terrifying villains are never the monsters. Although the volcra creatures are formidable, the real threat always comes from the human characters, such as a violent criminal that attempts to thwart the Crows in brutal measures. Along with the show’s surprise main adversary, a group of people called the Fjerdans add the most danger to the show’s landscape. The Fjerdans hunt Grisha with blind hatred based on archaic beliefs.

The drawback to spending time with these dynamic characters is that it puts a spotlight on the shortcomings of Alina, the main protagonist without much variety. Although likably played by Mei Li, the character is a bland young-adult-literature-type. She checks the boxes that are consistent with the genre. Her strength translates to stubbornness and her eager craving for attention from men lands her in precarious positions, making Alina’s personality feel like a frustrating product of a bygone era of teen literature. Although this is the characterization most closely aligned with the book, it feels like an oversight on the writers’ part; Alina could definitely stand to be more dynamic and layered.

The World of Shadow and Bone

In some ways, Shadow and Bone separates itself from its young adult roots as quickly as possible. It establishes grit with gory violence and partial nudity, as well as a heavy sprinkling of innuendo. It never strays too far across the line though, making for the kind of family entertainment that all ages can enjoy and garner something from.

The interpersonal relationships are relentlessly dramatic in a way that feels geared towards a younger audience. Early on, there’s a hint of a love triangle, but it is quickly squashed, which is a welcome relief. So often in fantasy stories, large age gaps or power struggles are romanticized. In favor of exercising that tired trope, we instead focus on the problematic power dynamic of one of the romantic stories. This feels like a fresh spin.

The show’s world is rich, not so much in the actual visuals of the war-ridden backdrop but in the way that its people invoke the details. Like any good fantasy world, the political climate is in a state of turmoil, thrown into further divide by the discovery about Alina’s power. Along with a religion that has both its believers and its cynics, Ravka feels like an established and familiar setting with a little more imagination.

Some of the strongest moments of the series come from the ugliness of Ravka; the people are teeming with outward racism and bigotry. Alina is frequently the target of racist attacks, sometimes verbal and sometimes physical, due to her noticeably being part Shu (a different country that we, unfortunately, don’t know much about). This, combined with the Fjerdans’ hatred for the Grisha based on their abilities, sets a tumultuous climate without being too heavy-handed. This element is handled with care.

It’s Worth a Watch

The story arcs are simple and entertaining, providing just enough context to keep you involved. What it lacks in complex themes it makes up for in character engagement and development and the progression of interpersonal relationships. In one side plot that feels detached from the rest of the series, a Fjerdan hunter and a Grisha heartrender make a trek through treacherous terrain and slowly become accustomed to one another. It’s a light and heartwarming aside and a clear display of the writers’ talent for understanding what keeps people hooked.

It, unfortunately, lacks ambition in noticeable ways, like Alina’s lack of drive and tinny backstories for all of the characters and the society in general. However, aside from the beautiful CGI, Shadow and Bone works best in its quiet moments of human connection, the ego battle of realizing your own potential, and boundless loyalty between friends. In spite of its flaws, it’s worth checking out for the endearing characters and, most of all, the fun of the perilous journey.