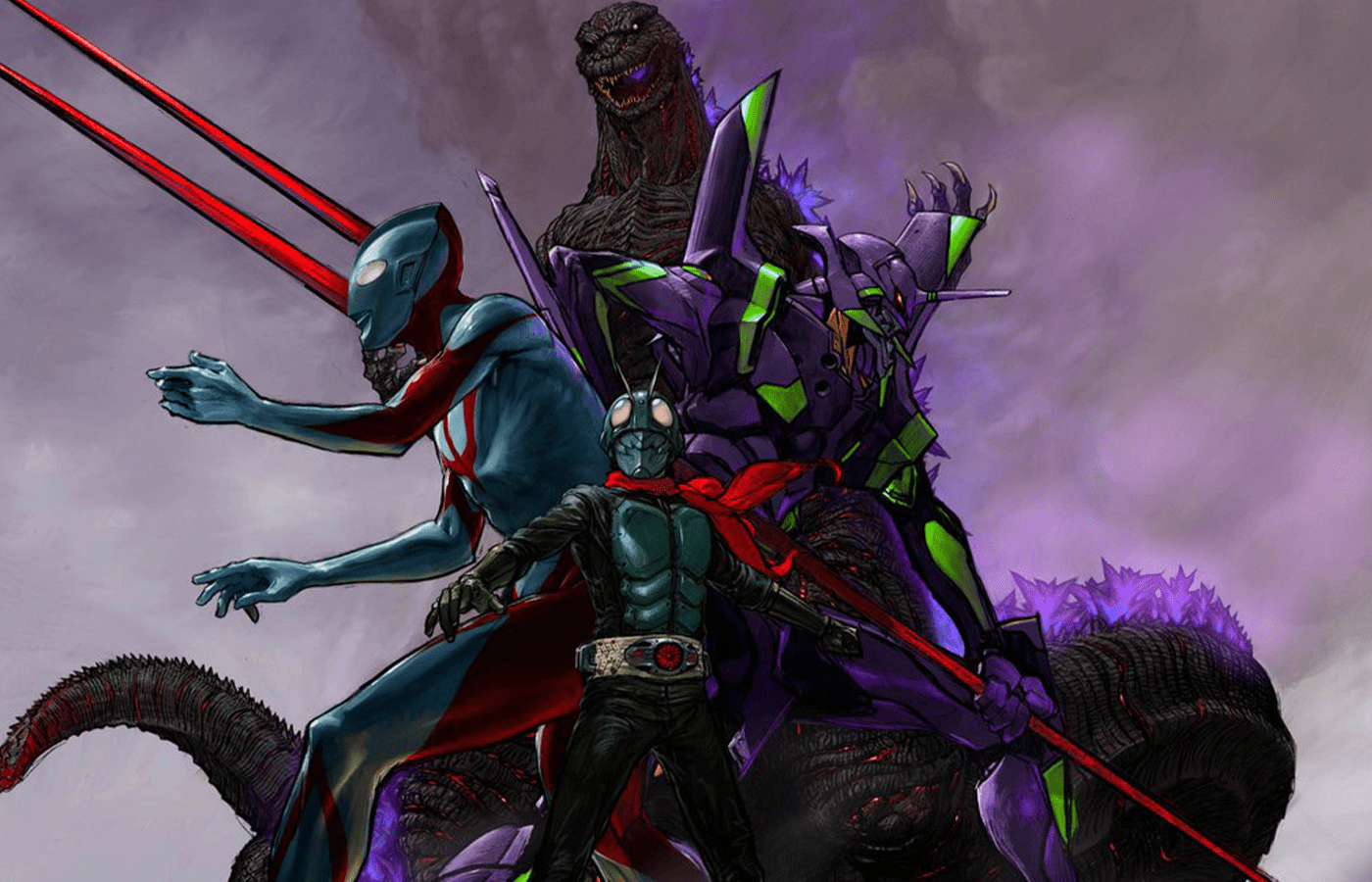 On February 13th, 2022, it was announced that four of the biggest studios of Japan: Toho, Tsuburaya Productions, Toei, and Khara, will be collaborating together on a special event centered on the ‘Shin’ projects from acclaimed duo Hideaki Anno and Shinji Higuchi.

This event, officially called the ‘Shin Japan Heroes Universe‘ brings together Shin Godzilla, Shin Ultraman, Shin Kamen Rider, and Neon Genesis Evangelion in a crossover event of some sort with more details to be announced soon. From the announcement, two images were revealed with a main visual image drawn by the talented Mahira Maeda, who has been involved in all four franchises of this event, and an emblem drawn by Yutaka Izubuchi.

Anno and Higuchi have been on a warpath with the kaiju and tokusatsu genres even since the release of 2016’s monster hit Shin Godzilla. In 2021, Anno finally released what he claims to be the final entry of The Rebuild of Evangelion films with Evangelion: 3.0+1.01 Thrice Upon a Time with much acclaim from audiences. Anno and Higuchi have two projects on the horizon with 2022’s Shin Ultraman (which is written by Hideaki Anno and directed by Shinji Higuchi) and in 2023 with Shin Kamen Rider (which is to be written and directed by Anno).

While it’s unlikely that ‘Shin Japan Heroes Universe’ is the announcement of a shared universe with these franchises and is more than likely a crossover merchandising event (similar to the Godzilla vs. Evangelion merchandise event to promote the release of Shin Godzilla), it’s clear the ‘Shin’ name and the works of Anno and Higuchi is something to celebrate.

Neon Genesis Evangelion remains one of the most popular media franchises in all of Japan and Shin Godzilla remains one of the most beloved Japanese films in recent years, so with the duo working on two more projects based on icons of Japanese pop culture, it shouldn’t be a surprise that the studios behind these franchises want to unite together with the upcoming releases of Shin Ultraman and Shin Kamen Rider.

For those unaware, ‘Shin’ is a word with varying connotations and meanings depending on the context. ‘Shin’ in this case could either mean New, True, or God. With Godzilla, Ultraman, and Kamen Rider it’s clear Anno and Higuchi are reimaging these iconic characters while keeping the spirit of the original versions. It worked with Shin Godzilla and with the excitement around Shin Ultraman and Shin Kamen Rider, so Shin Japan Heroes Universe as a title makes sense for this event.

It’s also incredible to see four major studios of any country working together for an event like this in general. In today’s cut-throat and hyper-competitive media market, seeing four of the biggest names in Japan coming together for a fun event like this. It’s more exciting it centers on the works of two major creators and that is something to be happy for.

So color us excited for the ‘Shin Japan Heroes Universe’ event and we can’t wait to see the likes of Godzilla, Eva Unit-01, Ultraman, and Kamen Rider together. It almost has the feeling of seeing your toy shelf of these characters blown to epic proportions. And if the Godzilla vs. Evangelion event was any indication, expect some dope-ass merch to be coming our way (and destroy our wallets).

Also to Hideaki Anno and Shinji Higuchi: when are we getting a Shin Gamera?!

Are You Excited For The Shin Japan Heroes Universe Event

Are you excited about the newly announced ‘Shin Japan Heroes Event’? What do you hope to see from these individual projects? Let us know on social media!