Spiral perfectly encapsulates the existential fear of the queer community. 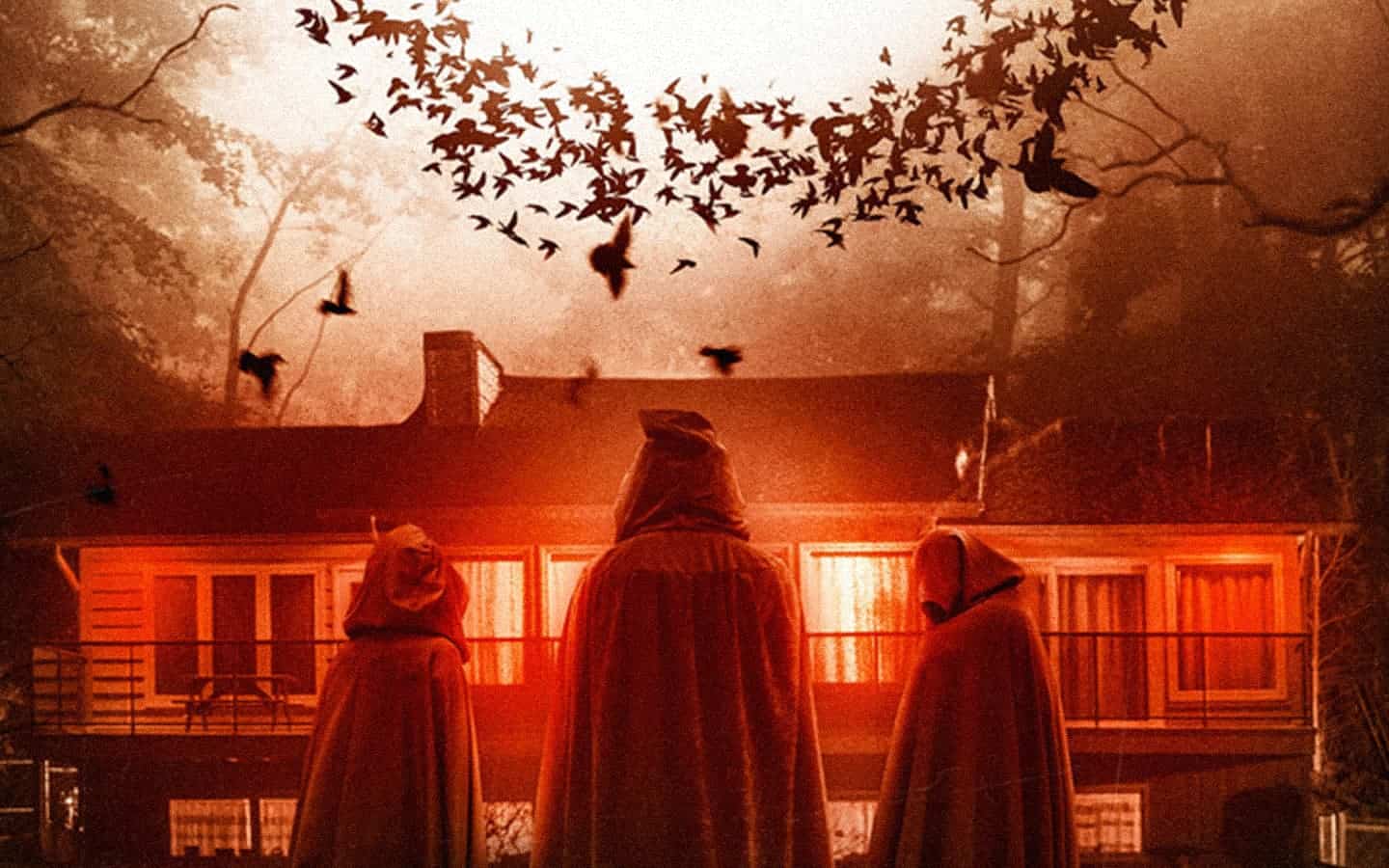 Prejudice is an infectious spiral crime of humanity against itself.

On a snowy night, a young couple is kissing in the backseat of their car. Suddenly, lights are turned on in front of them, startling them. But these lights mean a call to violence and punishment. Fast forward to the main terror that audiences will experience occurs in 1995 on the American small town of Rusty Creek. Same-sex interracial couple, Malik (Jeffrey Bower-Chapman) and Aaron (Ari Cohen) are moving alongside their daughter Kayla (Jennifer Laponte) to Rusty Creek.

As they pass the entrance bridge, a bird crashes in the front window of their car. The crack in the window is formed like a SPIRAL. The events this family is about to see will spin their minds towards madness and tragedy.

Spiral (2020) is directed by Kurtis David Harder and written by Colin Minihan and John Poliquin. The film centers on Malik’s point of view of the terrifying events he experiences as he moves in with his husband and daughter in their new home. At first, they live proudly while adapting to a new home. Soon, Malik and Aaron are greeted in the neighborhood by a charismatic family made up of Marshal (Lochlyn Munro), Tiffany (Chandra West), and Tyler (Ty Wood).

As the neighborhood greetings occur, the spinning begins on Malik. Malik is an author who is currently writing a biography surrounding a conversion therapist founder which infuriates him. However, his biggest fears emerge when an intruder paints a slur on his home. The hateful word (faggots) unleashes Malik’s fears and ignites his childhood terrors that are presented via flashbacks throughout the film. These flashbacks represent the night he and his late boyfriend were attacked by bigots resulting in tragedy. As Malik tries to hide his fears and the painted slur from Aaron and Kayla, his mind keeps spinning through various incidents with his neighbors.

As the terrors increase towards a terrifying climax, Malik soon learns of a cult conspiracy that goes way back in human history. He understands that he needs to fight and at least give some hope, albeit small. Throughout the film, the audience dissects Malik’s mind to understand his fear which comes from a prevalent issue, prejudice. Given that Spiral is set in the 1990s, discrimination and hate crimes towards queer people were still ongoing.

Malik, like so many queer people know that their existence is always at risk by a superior group bent on punishing them. An example is displayed in a heartbreaking scene where Malik tells his daughter, “Do not draw attention to yourself”. He understands that society will forever torment him and his family and will everything they can to accomplish it. This speaks to the increase of homophobia, racism, sexism, xenophobia, and every type of hate in the 1990s United States. Fast forward to 2020, prejudice still exists worldwide and keeps expanding in new ways. This is the message of the film and as stated by Marshal that fear is a human nature that can be exploited. The whole manipulation process is a spiral with fewer paths to break the cycle; however, Malik maintains hope by providing the key weapons needed to help marginalized people protect themselves and fight.

To conclude, Spiral delivers the essential and painful Queer Horror story that strikes through the soul of queer people who currently face fear. Combining the social message around discrimination in Jordan Peele’s Get Out and the traumatic religious violence of Ari Aster’s Hereditary, Spiral perfectly encapsulates the existential fear of the queer community. Malik’s spiral situation further drives him to uncover the continuous human genocide. He is the highlight of this film and now considered as the centerpiece of the Queer Horror genre.

Malik presents the past, present, and future of existential terror based on discrimination towards queer people. However, he expands that analysis by stating that every marginalized person who is different than the superior group is selected to be sacrificed. Therefore, prejudice is an infectious spiral crime of humanity against itself. Still, there is hope left at the end of the film but leaves into question how someone can confront and defeat an ancient human systemic violence.