The weight of Shutter (2004) juxtaposed against the current #MeToo era—wherein very little has changed socially or politically—is a heavy load to bear. 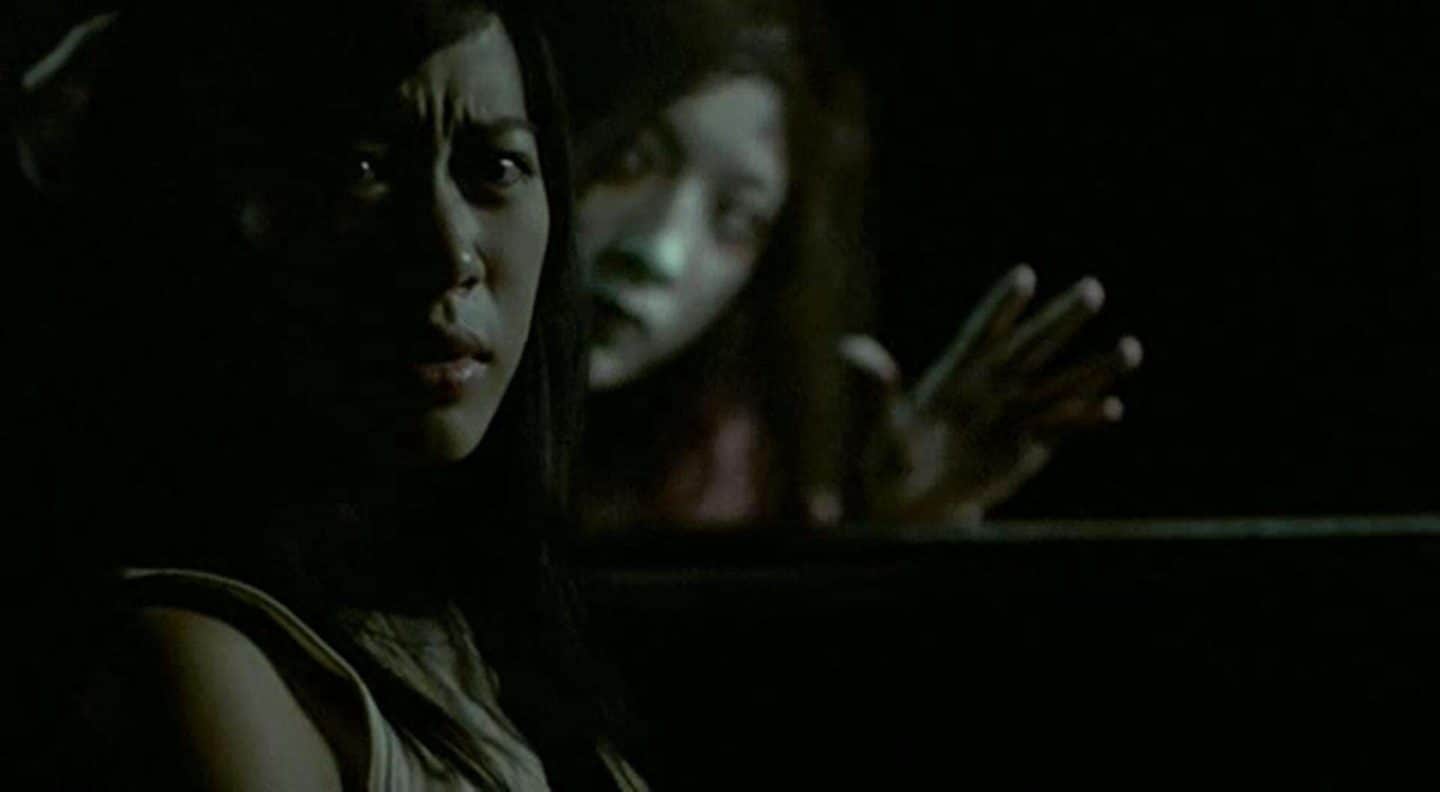 The weight of Shutter juxtaposed against the current #MeToo era—wherein very little has changed socially or politically—is a heavy load to bear.

Why would the dead return to the living without a message to convey?

This question is posed within the film by a paranormal researcher to the main characters and to an audience who has ever witnessed an apparition. Perhaps you witnessed it in the shadows, through a mirror, or in a photograph. There’s a belief that spirits or energy wander the earthly plane seeking something that a mortal individual cannot ever bestow. Thus, we create rituals for our dead, such as flowers, elaborate ceremonies, and shrines to which they’re entombed to appease them and ourselves. There are various ways we handle grief surrounding the dead—with courage or cowardice.

Uniquely, a powerfully resonant film from decades ago in Thailand is situated as a reverberating time capsule that situates the current #MeToo movement and the ghosts of silence. The two Directors of Shutter (2004) Banjong Pisanthankun and Parkpoom Wongpoom, along with third writer Sopon Sukdapisit explore the specters of guilt, lies unacknowledged, all coupled with the prevalence of violence against women. The film posits the following premise: what if you committed an atrocity against a living person and the source of your terror appeared in death as a malevolent image frozen in time?

The Cudgel of Violence

Violence is often, in fact, abundantly wielded against women in very particular ways. Emotional, monetary, and/or sexual abuse are the cudgels that are regularly swung to keep women quiet, subdued, or under control. Within the film, various types of abuse are subtly or blatantly depicted, and it’s up to another female character to unearth her life and her death—with the aid of her reluctant boyfriend who we later discover is hiding a grave secret. The filmmakers of Shutter explore another insidious part of abuse, where one individual could have a mental illness, and the other partner could take advantage of them to fulfill another part of their own emotional or sexual needs.

It’s gross and an imbalance of power to fetishize a person let alone the idea of a person and to use them as an emotional outlet. This film pulls no punches and I greatly respect it for that, because the world responds to (sexually) abused people in much the same fashion. The digital and face-to-face interactive spaces with other humans are filled with disgusting and horrific commentary about what victims should and shouldn’t have done and it’s this pointed commentary that’s injected into the film whenever the perpetrators of violence try to shirk the magnitude of their crimes.

A Picture is Worth a Thousand Words

Photographs are utilized in the film to capture the moments of trauma surrounding a violent physical and sexual assault against a woman—with the intent to shame and terrorize. By weaponizing the photographic image, there is an intent to lock an individual into a particular place and time of trauma. As a voyeur, the camera’s wielder is complicit and in a reprehensible position that is just as condemnable as the other actors of violence. I shouldn’t have to say this but filming or photographing physical or sexual violence is wrong, and a moral and prosecutable crime.

The film is explicit in this messaging and utilizes a paranormal entity to illustrate that your victims aren’t left behind and that you literally carry the weight of your misdeeds. One of the most iconic stills from Shutter is the ghost of the woman sitting upon her (former) boyfriend’s shoulders with his neck perpetually bent forward, face downward in shame. He’s been trying to burn the photographs of his past, forget his “young and stupid” past, and hide the truth of his past from his current girlfriend but the weight still remains in the present.

The Cost of Silence

Shutter opens with the boyfriend (unknowingly) running his former girlfriend over with his car and leaving her for dead. The woman he’s currently in a relationship with is prevented from leaving the car to help her. This moment is when red flags were raised for me about the film I was about to experience. There was going to be a very astute commentary about the dangers of cosigning people’s actions or inactions surrounding violence and I needed to brace myself for the journey ahead. The conversations that were explored about depression and suicide were also unexpected but very welcome because few films horror or otherwise explore the nuances of life before and after sexual violence. There’s surprisingly not a lot of blood or outright gore in this film and that is to its benefit and grounds it in realism, ghosts aside.

However, I would recommend a trigger-warning for this film because the scenes of physical and sexual violence are horrifying to the extreme. The photographic component of being mentally and physically violated greatly resonates with the current digital landscape of our culture and how explicit photos are weaponized against people for silence or compliance. The creators of this film crafted its horrors from a (Southeast Asian) Thais perspective, but the film is worthy of global reflection because the messages it crafts are present in every nation where women face assault based on their sex and a culture of being sexualized. The weight of this decades-old film juxtaposed with the current #MeToo era—wherein very little has changed socially or politically—is a heavy load to bear.