Skull: The Mask (2020): The Violent Truth of Colonized Brazil

Latin American horror films tend to come with rich backstories and mythology. Some explore their county’s folklore, while other films dive into a nation’s history. What happens when a film dives into both? 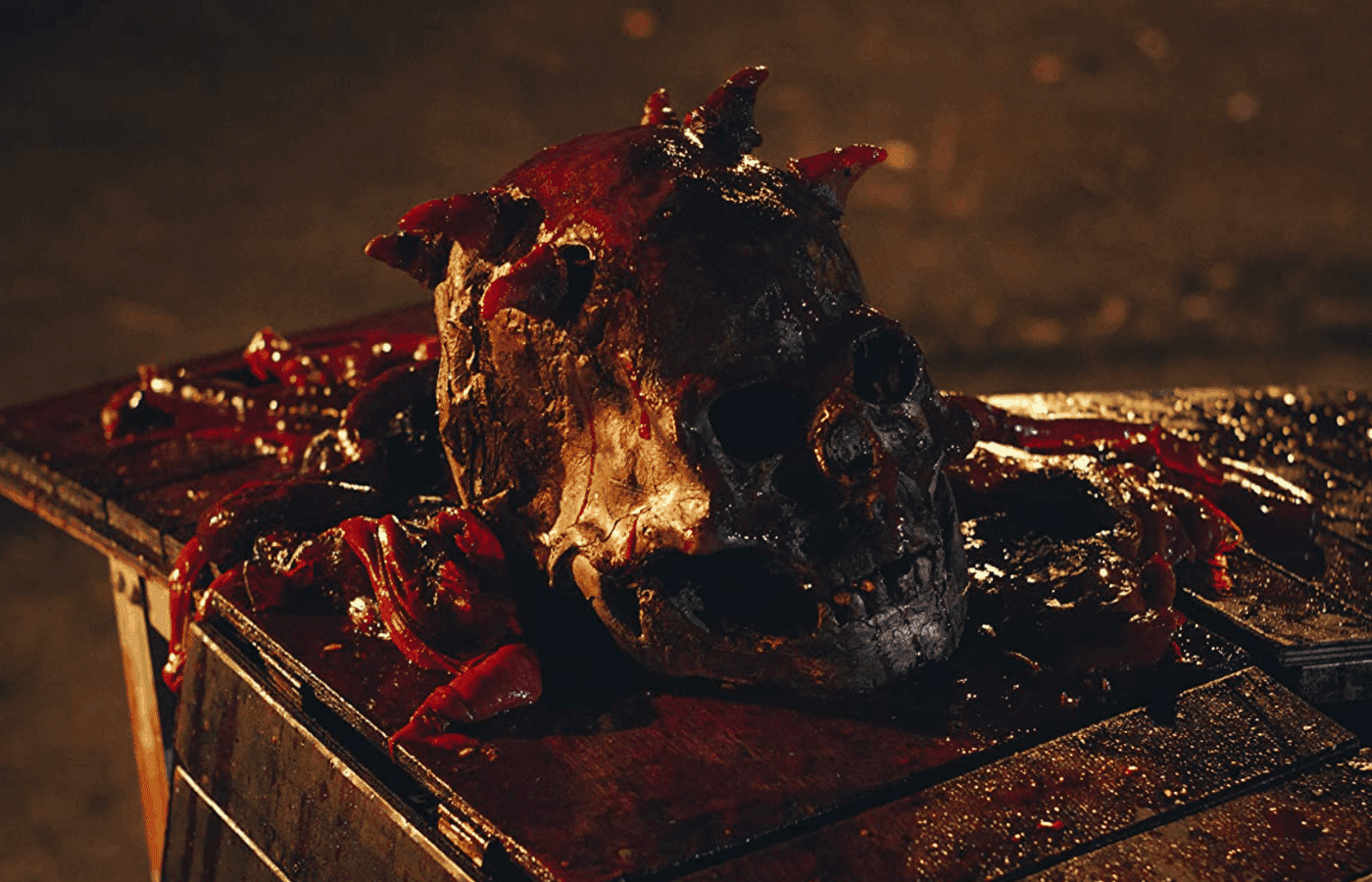 Latin American horror films tend to come with rich backstories and mythology. Some explore their county’s folklore, while other films dive into a nation’s history. What happens when a film dives into both?

Latin American horror films tend to come with rich backstories and mythology. Some explore their county’s folklore, like Sol Moreno and J. Oskura Nájera’s Diablo Rojo PYT, while other films dive into a nation’s history, like Cristóbal León and Joaquín Cociña’s The Wolf House. What happens when a film dives into both of these factors? We get a supernatural slasher film like Armando Fonseca and Kapel Furman’s Skull: The Mask (Skull: A Máscara De Anhangá).

The premise of the film plays across four major plot lines. Before getting into the several complicated threads, the film begins with the unveiling of the cursed Skull mask. This reveal is done in a Grindhouse fashion akin to Robert Rodriguez’s Planet Terror and 1970’s exploitation films with martial arts and over-the-top gore.

After the title drop, the first plotline begins. This thread revolves around a police officer named Beatriz Odbias (Natalia Rodrigues) who is on the search for missing Bolivian children in São Paulo, Brazil. As she runs around the metropolis of Brazil, she comes in contact with Tack Waelder (Ivo Müller). Little does she know, Waelder is responsible for the child abductions. Tack Warlder’s story is the second plotline. His goal throughout the film is to capture the missing Skull artifact. Because of this hunt, his company intermingles with Beatriz and her objective as he tries to hire her.

Just how the first two plotlines are closely related, the same goes for the final two. The third and last human plotline focuses on the one true savior of Brazil, a lonely merchant named Manco (Wilton Andrade). Within the film, we learn about his connection to the intro sequence and how his bloodline is meant to protect Anhangá. It’s not entirely clear why this family is chosen but there are ties inside the church.

The last and the most fun plotline follows our supernatural slasher named Skull, played by Brazilian wrestler Ruiki Jr. Following in El Santo’s footsteps, Ruiki Jr. steps onto the set with his mask and gives the audience a fresh take on wrestling and horror. We get a gore-filled wrestling event: bodies fly, hearts get eaten, and intestines are used as murder weapons.

Anhangá and the Portugese Conquest

As previously mentioned, Fonseca uses pre-Colombian mythology for his theatrical splatter-punk gorefest. Anhangá is believed to be a spirit by the Indigenous people called Tupi-Guarani. In the film, their language is used to conjure the evils of the Skull mask.

The story of the Tupi-Guarani and the Portuguese conquest is as rough as any pre-Colombian history stories involving the Spanish colonizers. As the Tupi-Guarani were one of the first tribes to come in contact with the Portuguese, there are numerous accounts of violence, rape, and manipulation. The Portuguese colonists’ main area of focus was in the town of São Vincente, which is now known within the state of São Paulo.

Jesuit missionary Jose de Anchieta is responsible for the modern iteration and translation of the Devil. In an attempt to erase their ancient religious rituals, what the Portuguese believed to be Devil worship, Anchieta translated the term “Anhangá” as “the Devil.” Keep in mind that the Tupi Indians believed Anhangá was a protecting spirit of animals and the surrounding jungle. This is just another account of manipulation that has survived centuries.

You can read more on the imposed Catholic religion on the Tupi Indians by Paulo Edson Alves Filho: Here

Religious Vengeance from the Tupi Indians

South American history isn’t used as exploitation in Skull: The Mask. Fonseca instead uses the backstory to his advantage as the spirit of Anhangá seeks revenge on the Catholic religion imposed on the Indigenous people of Brazil. Skull walks the modern streets of the concrete jungle using the same amount of violence and bloodshed the Portuguese colonists once used.

In Skull: The Mask’s lore, a secret organization known as The Order was put into place to protect humanity against demons. During an exposition inside the local church, Fronseco focuses on Catholic imagery with a slow pan shot. There are also multiple instances where Manco has a disagreement with Padre Vasco Magno (Ricardo Gelli). Initially, Manco and Padre Magno have lost faith in The Order. Manco simply wants his father’s artifacts. Padre Magno declines because of Manco’s poor living conditions. The Padre believes the artifacts will be best kept safe inside the church. Not much information is given until their second meeting.

By this time in the film, Manco believes the ritualistic deaths are performed for Tahawantinsupay (Tahaw for short), the cosmic entity controlling Skull. According to The Order, Manco would need the femur of Tahaw to lure Skull. The Padre believes it could be some random maniac trying to recreate the deaths and refuses. After losing the argument against the stubborn Padre, Manco walks away. This scene ends exactly at the midpoint of the film. Skull’s religious revenge will soon come to an end.

The stylized fight between the Padre and Skull is easily one of the best within the film. Following the atmosphere of the opening sequence, Fronseco reiterates his love for martial arts and exploitation films. In the vain of Beatrix Kiddo fighting the Crazy 88 in Quentin Tarantino’s Kill Bill, the background switches to a stained glass religious relic. In the foreground, both the Padre and Skull are in a black silhouette. Black blood flies across the colorful frame.

Although this fight has been built up from the first half of the film, the prominent focus of this shot is the cross in the center. Fronseco shines a light on forced Catholicism within the Indigenous tribe of the Tupi-Guarani. Skull leaves the Padre for dead with a final blow by breaking an angel statue on the Padre’s torso. Winning the gore-filled sword fight, Skull’s white jumpsuit is engulfed in blood. This crimson change signifies the Tupi Indians’ revenge is complete.

Brazilian horror has been leaving a mark on Latin American horror cinema recently. Some of these films are terror-inducing yet enjoyable nightmares, while others use the medium to focus on social issues. As Skull: The Mask’s ambitious narrative progresses, the chaotic mess is enough to satisfy the audience’s need for another contemporary slasher entry with an abundance of practical gore. But the over-the-top violence is used both as gratuitous fun and as a means to speak on Brazil’s conquered past.