Space Jam: A New Legacy banks on nostalgia and misses. 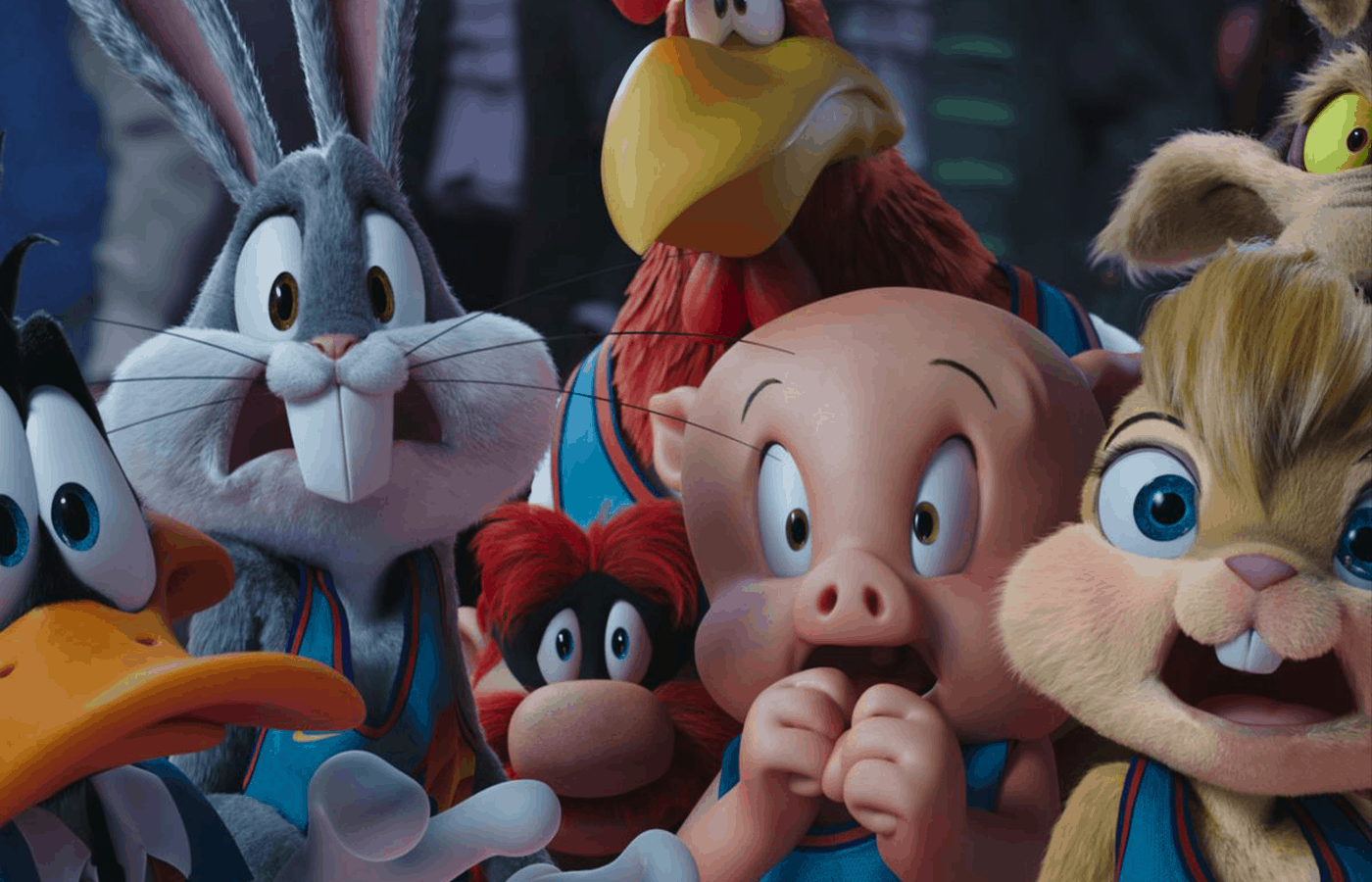 COME ON AND SLAM!

In 1996 the cinema was graced with one of the greatest gifts in history. Space Jam is more than just a film, it is a calling to everyone out there that you too can accomplish anything…if you are a professional athlete, have millions of dollars, and have the support of a gang of legendary cartoon characters. In reality Space Jam was one of the most ’90s things to ever be created. It’s extremely dated and the whole thing was based on a series of Nike commercials from just a few years prior.

I am of the firm belief that it isn’t a controversial statement when I say Space Jam is a bad movie. Tale as old as time, Pro NBA player and commercial icon Michael Jordan and Bugs Bunny, along with the rest of the Looney Tunes roster must save themselves from being enslaved by aliens with a no holds barred Basketball game. One of those famous pieces of so-bad-it’s-good art that just hits all the right boxes.

Long drawn-out scenes of athletes trying their damndest to act, dated references to ’90s culture, terrifying 3D animation, and surprisingly well-made interactions between live-action people and traditional 2D Looney Tunes. Most importantly you can thank Space Jam for giving thousands of furries their sexual awakening with the introduction of Lola Bunny.

WELCOME TO THE JAM!

Twenty-Five years later the Heavens parted and we lowly peasants were given another gift, a new legend, nay! A new legacy! Space Jam 2, not called Space Jam 2 because it dances around being a sequel. Space Jam: A New Legacy for those who weren’t excited when they saw the trailer stars LeBron James who is similar to Michael Jordan in the sense that they are both one of the first names that come to your mind when you hear basketball and they’re both impressively bad actors.

Shifting gears from the worst actor to my favorite of the film. The villain of this movie is an egotistical algorithm played by Don Cheadle named Al G. Rhythm is easily my favorite thing about the film in more than one way. First, his acting just gets more and more looney as the film goes on, it is truly inspiring how much scenery he can chew.

Second, the fact the villain is an algorithm that seems to control all of Warner Bros. properties, and what we see of the film is mostly his making in the “Serververse” sort of implies not too nice things about writers working for WB. Mr. Rhythm does the things all evil A.I. you would expect from a movie made in 2021, hacking and watching people through their phone cameras.

Al G wanted to get LeBron in on this program where the basketball star could be deep faked into any Warner Bros. property. LeBron calls this awful plan out on being awful and the algorithm responds by kidnapping LeBron’s son Dom. The main crux of LeBron’s arc in the film is his relationship with his son. Dom wants to be a game designer while Lebron wants his son to play basketball. Al G. Rhythm uses their argument to turn father against son in the big “Dom Ball”. While Al is manipulating Dom into making a heel turn, LeBron is thrown into Tune World to begin forming his team. Getting all this so far?

COME ON AND SLAM?

We’re introduced to Bugs Bunny, a sequence of some child-safe classic Looney Tune violence starts as Bugs chases LeBron all over. This scene is honestly one of the best in the film as the animation is fast and energetic. Bugs makes a call back to the original Space Jam and other than a joke about Michael B. Jordan, those were the only references to the first film I caught. The two steal Marvin the Martian’s spaceship and begin to travel to the other Warner Bros. themed worlds and here is where my biggest problem with the film lies.

When this sports draft montage through the Warner Bros. multiverse was going, it seemed they were building up Bugs intentionally sabotaging LeBron’s efforts so they would only have the Looney Tunes. When we are introduced to Bugs he says Al separated the Tunes and Bugs had gotten lonely. I genuinely thought there was going to be some kind of “Liar Revealed” plot but, no once the tunes are assembled, Bugs is never questioned.

The montage in question is also lacking in my opinion. I’ve seen others have compared Space Jam: A New Legacy with Ready Player One and unfortunately I don’t think I can come up with anything better. The film from the half point onward has the screen almost constantly covered with references to Warner Bros. properties.

But that’s it, references. It feels like pretty lazy writing as there aren’t jokes about the movies being referenced, they’re just there and that’s the whole joke. It reminds me of a Family Guy cutaway gag or films like Epic Movie. I know this film is made for kids and I’m not expecting thought-provoking satire. All I’m saying is I think young kids will like this movie but it’s not going to be anyone’s favorite.

Even when the film is making its own jokes and not just putting Roadrunner in Mad Max: Fury Road, the film lacks the odd charm of the first movie. The first Space Jam may have a rotten score of Rotten Tomatoes but at the time of its release Space Jam was given some moderate praise from critics and even won a few awards. New Legacy feels a bit hollow like a lot of bad sequels. It’s disappointing because just like the first film, friends and alcohol can make this a fun ride. Then I remember the cringy things like references to dead memes and Porky Pig rapping and I want to take back my back-handed recommendation.

IF YOU WANT TO JAM?

I think Space Jam: A New Legacy will be one of those films where you’re either on board for the silly cartoon basketball movie or you’re not. If you have a high tolerance for cringe then I say it’s perfect background noise for a party. I’ve been pretty negative in this review so I’m trying to end on a positive note. Space Jam is seen as a fun time capsule film for the mid-late ’90s, while I think it’s extremely unlikely, maybe in the year 2046 Space Jam: A New Legacy will be seen that way too.