SSSS.Dynazenon Episode 8 Review: The Heart Of A Kaiju?

With the eighth episode of SSSS.Dynazenon, a conflicting question is asked, “Is it wrong to kill kaiju when they aren’t rampaging?” This is the overarching message in this episode and leaves you unsure of the answer. 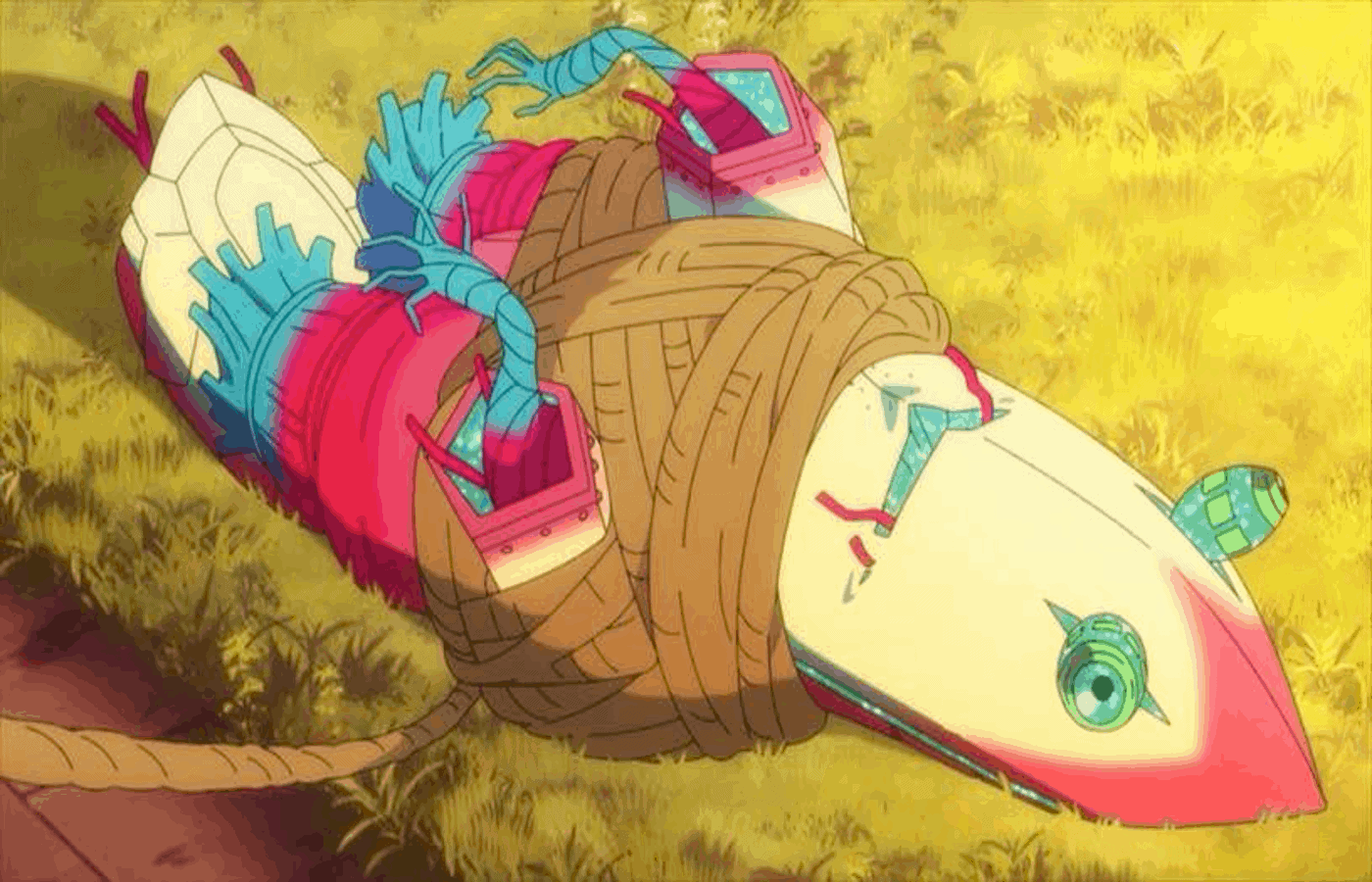 On this week’s episode of SSSS.Dynazenon, the ethics of fighting kaiju are brought into the forefront.

With the eighth episode of SSSS.Dynazenon, a conflicting question is asked, “Is it wrong to kill kaiju when they aren’t rampaging?” This is the overarching message in this episode and leaves you unsure of the answer. At the same time, it leaves a great impact on the watcher.

The episode begins with failed kaiju making an appearance. The creature has the power to color things and nothing more it seems. It is small, awkward, and isn’t hurting anyone despite the fact it discolors Gauma’s face. A question arises in the group. Do they have to kill it? Is it really harming anything by just existing? This question of morality weighs heavily throughout the episode.

In an effort to not kill the kaiju, Gauma attempts to control it. When he fails everyone else tries the instance domination technique trying to see if they have any luck. After attempting it Yomogi has a moment it seems to work only for a weird sensation to wash over him. He tries instance domination again later in the episode and it seems to work for a brief moment but the kaiju exposes a new eye and looks right at him. A connection is made but a hard choice has to be made at the cost of saving lives. The result leaves Yomogi confused about how to feel but Minami is there to help cheer him up.

Other than the major moral theme there are a few other interesting aspects to address in this issue. The mystery of what “Inamoto showed Koyomi back when they were in school together” is revealed. It was a bag of money, the kind one would expect to find in a gangster movie. A stash of cash a bank robber would hide in hopes of returning for when the heat was down.

With this revelation, you can’t blame Koyomi for bolting from the scene. Inamoto was getting involved in something she really should have just left alone. Hard to tell where this part of the story will go from here.

Without a kaiju to control this week, The Kaiju Eugenicists go out and enjoy some recreational activities to pass the time. Onija and Mujina seem to have grown closer and reached a consensus for once. This seems to be attributed to how they had to work together to control the previous kaiju and seemed to have formed a connection as a result.

After the quartet sleeps the night away at the facility, someone suggests going to a movie. It feels like the Kaiju Eugenicists have nothing to do with waiting for kaiju to arrive. Is this a hint to the idea they are lacking something deeper in their lives? Put a pin in this one and we’ll see where it goes in the last few episodes.

Gauma while guarding the reject Kkiju he reflects on the person who gave him Dynazenon. This time he calls her Princess. So a princess gave him the robot. A princess would mean a kingdom and more world-building to the series. With only four more episodes left in the series, this could be a setup for events to happen in future installments of the Gridman universe.

Also, Gauma keeps forgetting the third thing the Princess said to keep important. “Promises, love, and…” It feels like the third thing will be revealed in the final battle and will be screamed by the team at the top of their lungs as they work to fight the enemy threat.

We are then reminded that Knight and The Second are kaiju themselves and considering people who control kaiju are the antagonists, there is a chance this could lead to them being used against the Dynazenon team later in the series. This potential plotline is something we’ll have to see develop as the series continues.

So, to recap, these plot points are still on the table with only 4 episodes left in the series. Chise still has a kaiju seed in her pocket and it has grown to the point it looks like a skeleton complete with wings. Yomogi seems to be on the path to becoming a Kaiju Eugenicist. Will Minami have to be the one to bring Yomogi back from the dark side he does? At the same time, Minami’s investigation into her sister’s death is still ongoing but will it be somehow connected to kaiju.

Perhaps once she learns the awful truth Minami will try to use the power of Kaiju to resurrect her sister. Koyomi’s crush discovered a large amount of money and may have kept it or not. Knight and the second may be susceptible to mind control before the final battle. Gauma has yet to find his princess and his old comrades, the Kaiju Eugenicists don’t seem to know what they are doing other than controlling kaiju. How many of these plot points will be resolved? Only time will tell.

Did You Watch SSSS.Dynazenon episode 8?

We hope you enjoyed our SSSS.Dynazenon episode 8 review! Did you watch the episode? What did you think? Let us know on social media!