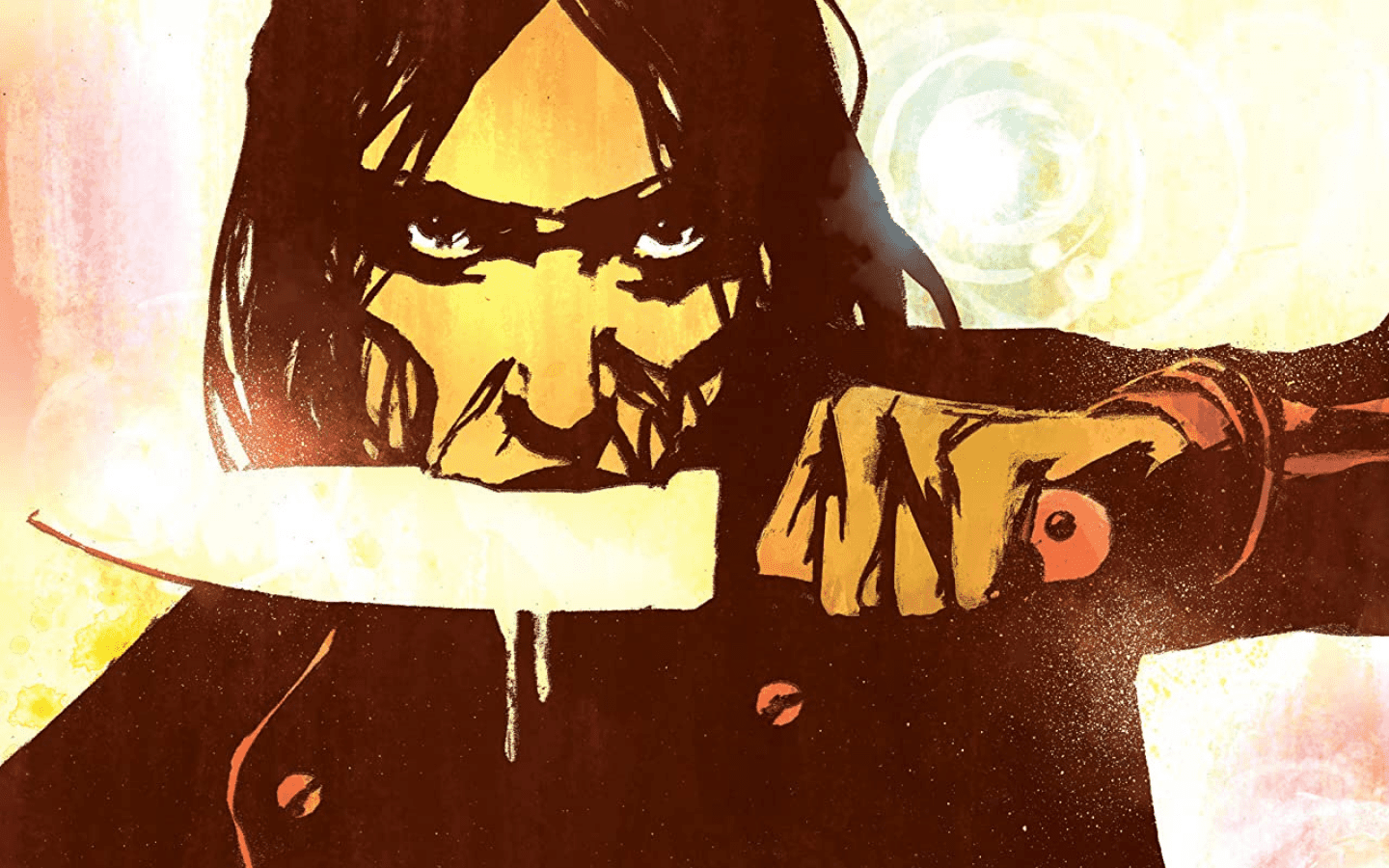 Starve is an Image Comic written by Brian Wood with art by Danijel Zezelj and Dave Stewart. This trade paperback was released in January of 2016.

In a country where only the wealthiest citizens can afford quality food, it is up for one man to change the status quo. Gavin Cruikshank is known as one of the best chefs in the world. His once humble television program has turned into the most extreme cooking competition. In order to make it to the top, contestants must commit crimes and acts of violence in order to prepare their meals. This is all done for the satisfaction of the cultural elite.

This is a spoiler-free Starve comic review.

I was approached by a man while I was walking into work the other day. He told me he could send healthy meals directly to my house. This man was spending his day starting up conversations with strangers in order to sell them gourmet meals. All of this was occuring a block away from a sidewalk full of food trucks. A block away from the food trucks is a small artisan donut shop filled with and uncommon combination of flavors.

Americans have always had a passionate affair with food. We seem to be living in an era where the culture surrounding food is changing. People are more interested in organic and fresh food. Artisan food crafting gives customers access to different types and combinations of ingredients. Americans have access to a wider variety of foods than ever before. Food has also made waves in the political realm. Policies and regulations regarding food are popular political issues.

Many people see the perks of this cultural shift as a positive. There is a large group of people eating healther foods with higher quality ingredients. The access and selection of gourmet foods has never been higher. Others, however, see this as a further separation between the wealth classes in the United States. They believe that the lower class is being priced out of these benefits. There are many places in America where it is difficult to find fresh, nonprocessed food.

Gavin’s journey is filled with obstacles and pitfalls. Brian Wood made sure that his character was put through the wringer in order to achieve character development. Gavin is working toward rekindling a relationship with his estranged family. He is also fighting with network executives who are entrenched in their way of thinking. All of this is happening on top of being a contestant on an all-star season of his own television program.

The political theme of this book becomes stronger as the story unfolds. One consistency in Gavin’s character is his distaste for the rich and famous. He believes that everyone should have access to fresh and high quality food.

This is the main motivation for his actions. Gavin’s journey takes him across all walks of society as he attempts to bring food to the people. Not only does Gavin fight against the upper-class food elite, he also brings aid to the working class in his city.

The artwork in Starve illustrates Gavin’s bleak outlook on his current situation. The art style is mostly dark, with brighter contrasting colors. Zezelj and Stewart found the perfect balance of darkness and vibrancy while keeping the color palette low. The pages almost look dull and bright at the same time. The drawing is often busy and chaotic, which is a good fit for the story elements.

Another interesting aspect of Starve is the book’s built-in recipes. The panels often include montages of the characters cooking. When this occurs details about the cooking process are written on the page.

These panels may not provide all of the information needed to prepare the meal, but give readers a good idea of the composition of the dish. This serves as a great break in the action and will be a treat for kitchen-savvy readers.

It is hard to change the world on an empty stomach, especially when you are fighting against the rich and powerful. Gavin Cruikshank uses his fame and resources in order to start a food-based cultural revolution. The story explains why fresh food should not be a perk of the privileged. Wood, Zezelj and Stewart come together to present comic book lovers with an exciting tale forewarning of the possible downsides of good eating.