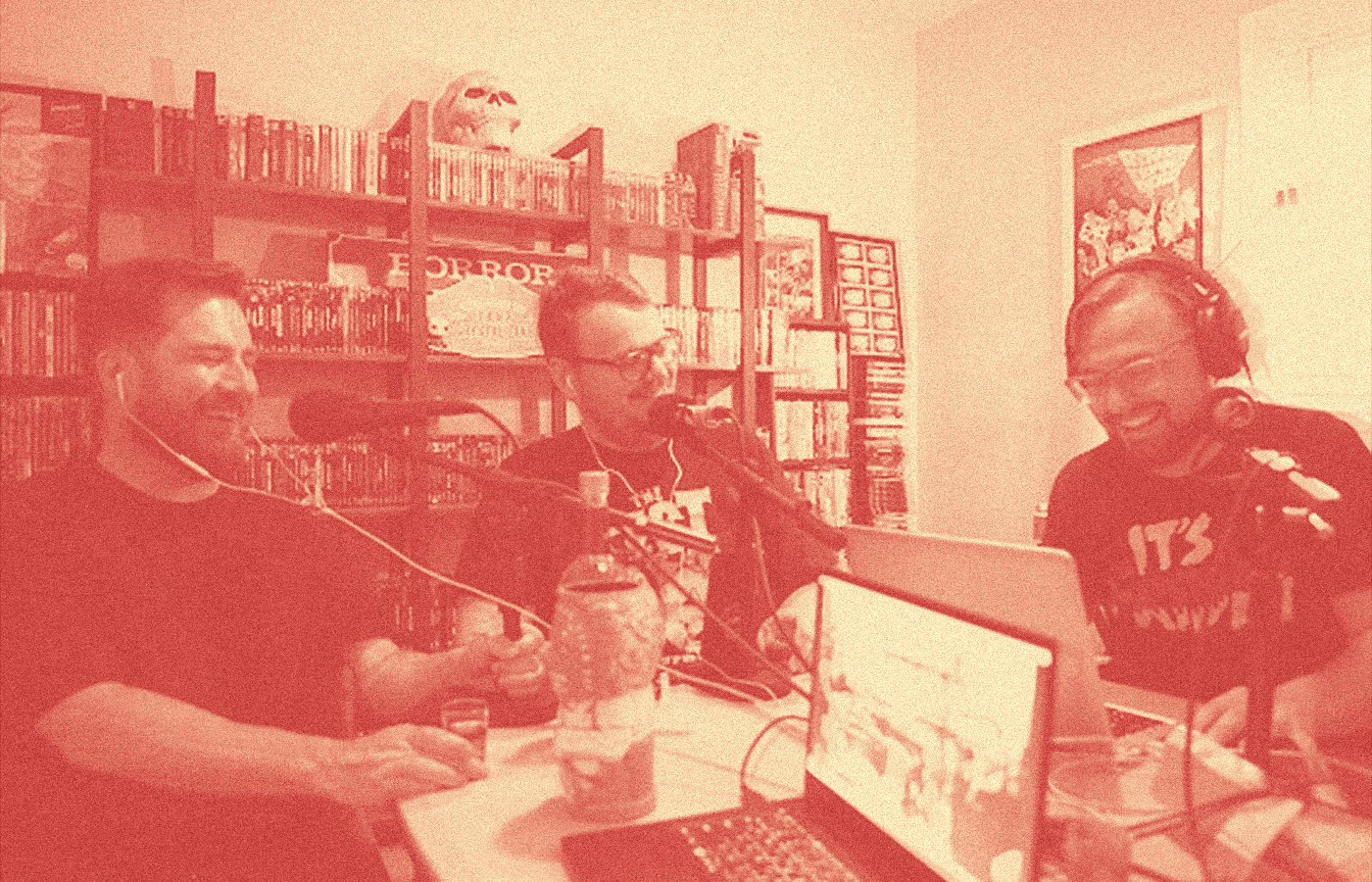 There is no shortage of horror movie podcasts out there, but one of the longest ongoing shows that does not get enough love is Straight Chilling. There are plenty of things that drew me to the Straight Chilling podcast, but the most important thing that stood out is their welcoming atmosphere. No experts, no socio-political discourse, just long-time friends talking about what they love most.

Listening to an episode of Straight Chilling is like meeting up with friends you haven’t seen in a few months while tossing back a couple of drinks. It’s silly, ridiculous, crude, but when you finish an episode you can’t help but be excited to meet up again next week. That’s why I was excited to talk with them about their show, how they’ve made it this far, and everything in between. Enjoy.

Who are you and what is Straight Chilling?

Justin: What up, it’s ya boi Soju, aka Juice, aka Justin. Straight Chilling is the greatest horror review podcast you’ve probably never heard of.

Andy: Name’s Andy… or Randy or Gandy, or any number of other names. Straight Chilling is a horror-centric podcast, where me and my old pals Bob and Soju review one film a week and make dumb jokes and stuff.

Bob: What up, nerds? I’m Bob, one of three hosts of the Straight Chilling Podcast. We are a weekly horror movie review show based out of Jacksonville, Florida. We rant and rave about the worst and the best of the genre while keeping each other (and hopefully our listeners) laughing.

Justin: I have been friends with these guys going on eighteen years now and we have been podcasting together for eight years with Straight Chilling.

Andy: The three of us all met in Middle School/High School and we’ve been compatriots ever since. We’ve been doing this for around seven years, I think? I dunno, the math escapes me but it’s been weekly and we’ve hit over 350 shows now.

Bob: We’ve been friends since before Michael Myers got karate kicked by Busta Rhymes. That is to say, too damn long. We’ve been doing the show for almost eight years now which is far longer than any of us could have anticipated.

How has making Straight Chilling kept you all close as friends?

Justin: The podcast has kept us all super close, especially over the past five years. In that time, I personally moved to Korea, and without the podcast, it would have been extremely difficult to stay as close as we have. Every week I knew I could count on seeing these guys and discussing something we all enjoy.

Andy: When Soju moved away from our collective hometown of Jacksonville FL, we were already doing the show regularly, and it made this an almost seamless transition where we get to stay up to speed with each other and crack jokes a minimum of once a week via Zoom.

That made it much easier when I myself hit the road, living in different parts of the US, and eventually settling in DC. They’re still my closest friends in large part due to the regularity of our chats on the show.

Bob: My two co-hosts have relocated since we started the show. One out of state and another out of the country. I think the weekly podcast appointment has kept us in closer touch than we may have been otherwise. I think that comes through in the show as well. We are excited to talk about movies each week, but even more, we are excited to talk to each other.

Justin: All of the tech issues that come with podcasting plus doing it halfway around the world. Scheduling would be the second biggest issue and possibly one of our biggest accomplishments has been casting for eight years straight without missing a week of the show. While one of us might miss an episode from time to time, the others are there to pick up the slack and we always deliver a weekly episode.

Andy: Scheduling, promotions, trying to structure for growth… we’re essentially partners and small business owners but with less of a profit motive (which is good because we only get a pretty modest income from Patrons). It’s can be really difficult with us in different time zones but we make it work.

Bob: The biggest challenge is standing out in a crowd. Podcasting has exploded over the last few years which is amazing, but now there are more shows vying for listeners than ever before. The technical side can also be challenging, especially when relying on Skype, Zoom, or some other video chat service to facilitate your conversations.

In your opinion, what makes a good podcast?

Justin: There are all kinds of podcasts out there but I think it is always essential to have a passion for the content as well as the process itself. I personally love podcasts that are rich with content and well put together but I can also appreciate a more relaxed podcast from time to time.

Andy: I think it depends on what you’re aiming for certainly, but for me, I feel like the ROI comes in the form of a good time with my friends, and additionally, making new friends and colleagues through our small but active community of horror nerds that we’ve cultivated. As long as we’re happy doing it, I call that success, even if it’s a tough piece to juggle.

Straight Chilling has evolved in subtle ways over the last few years. What’s your blue-sky vision for the show in the future?

Justin: The three of us have great chemistry and have a ton of fun ideas for more content that is unfortunately stifled by real-world obligations. If we ever had the opportunity to work on the podcast full time we would produce all kinds of incredible horror content.

Andy: I think any evolutions of this show will be subtle, because its primary purpose is for our enjoyment above all else, and none of us have gotten sick of shooting the shit and cracking in-jokes in close to 20 years.

But in an ideal world, I think all three of us would love for more ambitious segments, to grow our community and keep it as welcoming and friendly as it is, and to (absolutely pie-in-the-sky) one-day support one or all of us as a full-time gig. I by no means EXPECT that but it is certainly the fantasy.

Bob: I’d love to do more live shows in addition to what we are currently doing. Hosting movie screenings, trivia, and things of the sort would be fantastic when it’s safe enough to do so.

Justin: My nicest review has to be episode #328 where I talk favorably about the horrible film Birdemic. My meanest would probably be episode #185 where I tear Halloween (2018) to shreds despite giving it an overall mediocre review.

Andy: My memory is notoriously awful so bear with me… I think my nicest was probably Train to Busan. Not that it isn’t deserved, but I gave it a rare 5/5 and decided it was way too enjoyable for me to want to dig holes in it. So I actively didn’t engage on the same level of critique I TRY to reach out of just sheer love.

My meanest review was probably our latest episode of Salo: 120 Days of Sodom. We were all pretty disgusted by the real-world context of that movie that seems largely undiscussed, so it wound up more akin to a PSA than a review… but we did not hold back on either the film or its creator.

Bob: I gave The Being a 4/5 review. I love the movie, but if I’m BEING honest that’s a little high. My meanest is easily The Lodge. That episode has become infamous due to my 0.5/5 rating and general decimation of the film.

What horror movie are you looking forward to the most in 2022?

Justin: I think X from Ti West is my most anticipated for 2022. I really enjoy Ti West’s films and really enjoy Mia Goth and Kid Cudi as well. I think this has some early potential to be a top-five horror film of 2022.

Andy: It’s hard not to go with Jordan Peele’s ‘Nope‘ or the new Evil Dead entry but Robert Eggers’s The Northman has my attention above all else.

If all three of you could give once piece of advice each, what would you say is the most important thing about making a podcast?

Justin: My advice would be to stay consistent. Everyone wants to make a podcast these days and everyone has big dreams when they start out doing it. However, most people don’t know their own limitations and try to take on too much. I feel like when people are looking for a new podcast these days they want something they can count on. Releasing consistent content is the cornerstone to a long-lasting podcast.

Andy: For me, having a good time is king. And that is largely possible due to having a great partnership with people I love and respect. I don’t know if that’ll be a safe bet for the ‘financial’ future of the endeavor but it will at a bare minimum make the workload more manageable and that helps it feel more like a fun endeavor than “work.”

Bob: Have fun with it. It’ll come through in your recordings and at the end of the day, I think that’s why most people get into podcasting anyway.

Where can people find your show?

Justin: Any app you have that matters should have a Straight Chilling profile you can benefit from.

Andy: On all podcatchers, of course! Or via StraightChillingPodcast.com

Bob: You can find us on iTunes, Spotify, Google Music, and basically anywhere you find podcasts.