The Action And Horror In Resident Evil

Most action games are roller-coasters but if you want the fun that comes from a horror game, there are the thrills of a very good haunted house. 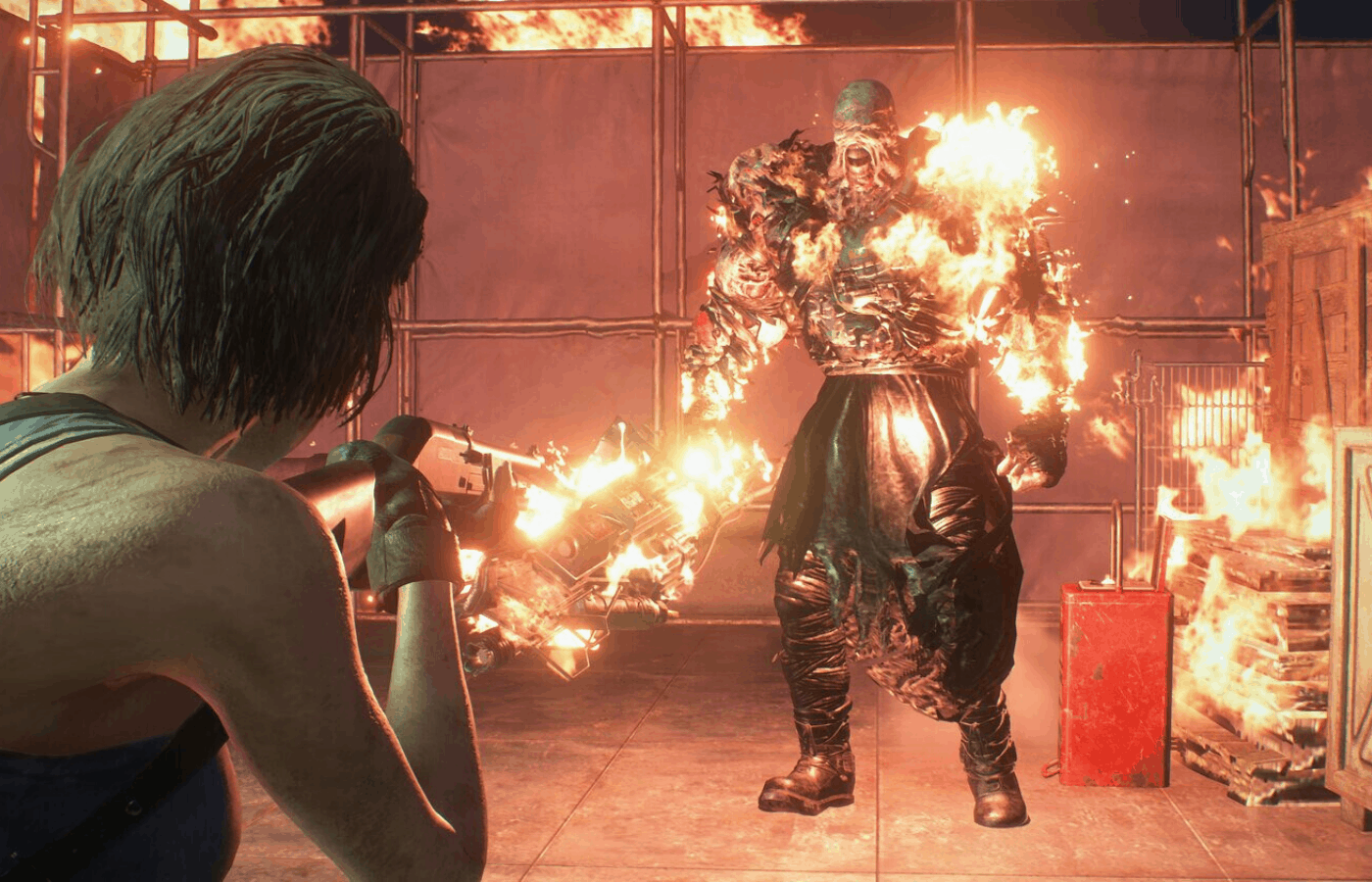 The Horror Within Action

So as of writing this, this Capcom is releasing their remake of 1999’s Resident Evil 3: Nemesis, and while I haven’t had a chance to play the full game yet (and with the world looking closer and closer like Raccoon City getting a copy might take a few hoops to go through), I did play the demo for the game and so far I am impressed. It definitely feels the developers took the foundation of last year’s stellar Resident Evil 2 remake, but I’ve noticed a change that perplexed me. Unlike Resident Evil 2 where the protagonists Leon S. Kennedy and Clair Redfield felt like average people ill-prepared for such a horrific scenario, the protagonist in RE3 Jill Vallentine controls slightly differently, but enough that shifts the tone of the game somewhat significantly.

Not only in bringing back the unbreakable knife, but Jill can now dodge zombies with much more grace. Essentially Jill very much feels like a professional and is more prepared than most would be in these scenarios. This made the demo feel a bit more “actiony” and yet with Jill’s character, the more open area full of T-Virus monstrosities, and Nemesis himself, it made sense for this new direction. Yet at the back of my mind, I’m still reeling from the disappointment that was Resident Evil 6. So one must wonder how to truly balance the horror and action in the Resident Evil franchise and to an extent survival-horror as a whole.

I Got A Shotgun!

Elements such as more enemies on-screen and an early version of the dodge mechanic that we see in the new remake. But late into development Capcom decided to officially rebrand the game as Resident Evil 3. Despite the focus somewhat shifted to action, RE3 still kept many of the prime elements of survival horror such as resource management, terrifying monsters, and the new edition of the game’s main antagonist Nemesis made sure the game would be scary as hell. It also helped the game used many of the same elements of Resident Evil 2 so it didn’t feel as drastic of a change as we’ll see with later entries of the series.

Not long after Resident Evil 4 would begin a very long period of development and during this time the first Resident Evil film would be released in between the third and fourth mainline games. Directed by Paul W.S. Anderson, the film (despite being intended as a prequel to the first game and before the release of the actual prequel Resident Evil 0), was less of a traditional horror film and more of an action film with strong horror elements. From dodging lasers to hyper-choreographed fights with the many T-Virus infected monsters, it’s clear Anderson took cues from action films such as The Matrix. Despite the massive departure from the kind of horror that defined the Resident Evil series at that point, the film was a massive box office hit and Capcom took notice while Resident Evil 4 was in development.

Resident Evil 4 went through many versions before we saw the final product including a much more action-focused version from Hideki Kamiya (who directed the original Resident Evil 2)which was later rechristened as the first entry in Capcom’s Devil May Cry series. As such frequent RE director, Shinji Mikami would take over as lead director for RE4, playing around with ideas of either being more psychological horror akin to Silent Hill or more towards action. He finally decides that the main focus for the fourth entry was the make the gameplay “fun” above all else to ensure a fresh new perspective as at the time many gamers and game critics felt the classic entries’ “tank controls” were getting a bit dated. As such Mikami made the groundbreaking decision to have the now-iconic “over-the-should” perspective to third-person gaming.

And while Resident Evil 4 was definitely more action elements than any entry at the time (including the “bullet-time” action set pieces inspired by the RE films), one thing that made it such an acclaimed is it still kept a lot of survival-horror elements. Ammunition was still limited and now the new enemies Las Plagas are much more intelligent than the zombies of past games. It now felt you were playing a cult movie/story like Wicker Man or the works of H.P. Lovecraft (without the blatant racism) than a traditional George Romero zombie movie. It made the more action-oriented gameplay made sense as returning protagonist Leon S. Kennedy had received more training but is dealing with an equally escalated threat.

One can compare this shift to Alien and Aliens as both are horrific in their own ways, one relied on suspense and build-up to the horror while the other was heart-pounding thrills at the moment. This perfect balance of horror and action in Resident Evil 4 resonated not only with survival-horror but video gaming as a whole. Games such as Dead Space, Gears of War, and even the Batman: Arkham series took what made RE4 work and this ripple effect continues to this day. But sadly not all good things last forever.

Capcom would release one of the more divisive entries in the series Resident Evil 5 and despite being the highest-selling entry in the series with 11.5 million copies sold, many fans are mixed on its place in the series, primarily leaning much towards being an action third-person shooter than a survival-horror game (there’s also the possible problematic portrayal of Africans in the game, but that is a discussion for another day). From taking place mostly in daylight, to more abundant supplies, and the biggest change being the introduction of co-op multiplayer where two players can play through the story.

This decision in a way shattered one major element of survival-horror, being alone against horrific odds. Doesn’t help the protagonist is Chris Redfield from the first game in the series is now redesigned as a hulking meathead who at one point in the game punches a gigantic boulder across a river of lava…yep that happens. So while the game is very much an action game with more dark sci-fi elements than horror per se, the game is still very well made with the co-op feature being incredibly fun. But despite it being a pretty good game, as a survival horror game, it’s unrecognizable. Unforutently other game developers and publishers took note of RE5’s success and soon many survival-horror games in the late 2000s/early 2010s decided to take a more action-oriented direction such as Dead Space 3 and Silent Hill Downpour, which many players and critics gave mixed to negative responses to these releases.

Another reason for this shift is that many AAA publishers felt the survival-horror genre is too niche to satisfy many of their unreasonable sales goals and as such they artificially killed the genre in a sense, thus it is a reason why we got this era of “action-horror”. And this led to one of the most divisive entries in the Resident Evil franchise, 2012’s Resident Evil 6. So before the release of the game one thing Capcom tried to mitigate concerns by saying it’s not survival-horror, but instead “dramatic-horror” to justify the even more extreme levels of action.

Despite that, the game tried to have survival-horror elements seen in two of the four campaigns, but it instead shows one of the biggest issues with RE6, it’s bloated to the point of bursting. From a ridiculous Michael Bay-esque set pieces, to a self-serious narrative that goes against the over-the-top action, and how the game lacks any challenge aside from just killing every enemy on screen. It tries to please everyone but instead pleases no one.

What makes many Resident Evil games work so well is earning the ability to blowing apart the monsters as when you start nine out of ten the first half of these games you are struggling in figuring out the environment, enemies, and use of items. But if you’re smart you are able to find some better means of fighting back, thus on the latter half of the game you are armed to the teeth! It helps you emphasize the character’s struggles into the narrative in a way only video games convoy.

You feel like someone who went through neck-deep in hell and now you are fighting for your life. It also helps the enemies are consistent in how much as a threat and supplies will remain scared.

With the newest releases of Resident Evil 7 and the remakes of Resident Evil 2 and 3, it’s clear Capcom realized what works and doesn’t work in this series. Resident Evil is near and dear to me and while I’d admit genuinely I had fun with the action-packed games, they don’t scream as Resident Evil games. And yes video games should be fun, there are different types of fun. Look at theme parks, most action games are roller-coasters or go-carts, but if you want the fun that comes from a good survival-horror game, there are the thrills of a very good haunted house attraction