The Conjuring: The Devil Made Me Do It tells the story of the Warrens' most significant challenge yet, and, in this case, it isn't demon possession. It's creative missteps. 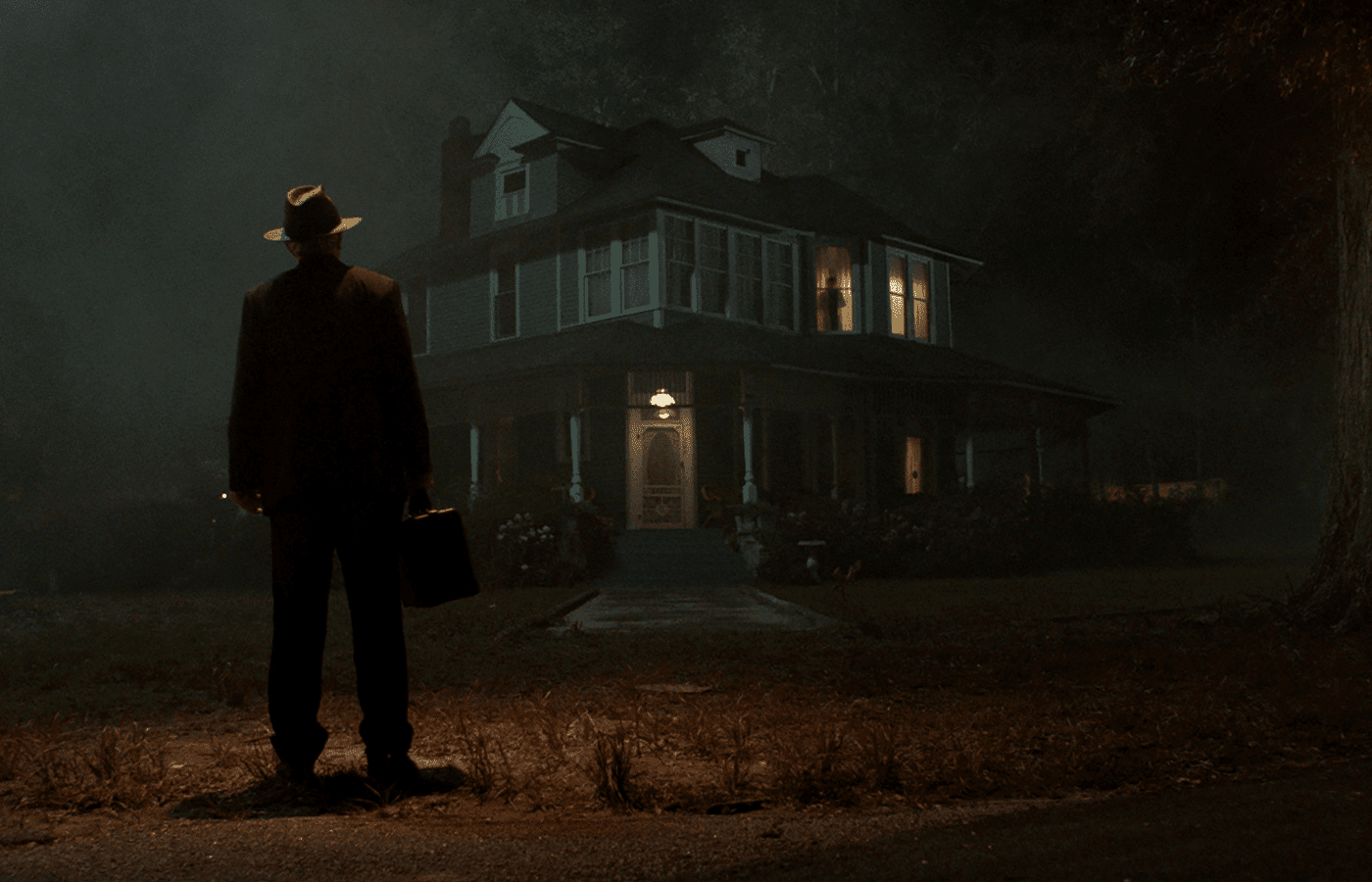 The Conjuring: The Devil Made Me Do It Review

The Conjuring: The Devil Made Me Do It tells the story of the Warrens’ most significant challenge yet, and, in this case, it isn’t demon possession. It’s creative missteps.

Trailers for The Conjuring: The Devil Made Me Do It heralded the Conjuring franchise as the “gold standard of horror,” and in some ways, it’s hard to dispute that claim. The Conjuring is undoubtedly the gold standard of mainstream studio horror. The first two films are well-crafted spookshows with vintage flairs and broad appeal that make great use of the chemistry between Patrick Wilson and Vera Farmiga as Ed and Lorraine Warren. The franchise spin-offs are just as easily digestible as the core films but nowhere near as stylish or mature, which was promised in this new film’s advertising.

There’s a lot different going into The Conjuring: The Devil Made Me Do It, though, primarily regarding the creative team behind this “three-quel” with James Wan stepping down as director in favor of franchise spin-off The Curse of La Llorona director, Michael Chaves.

Personally speaking, I’m a great fan of the core films rather than the satellite films; this change seemed to create a mystery as to the quality of this new film, which is appropriate considering its plot has more of a mystery flair to it than previous entries.

So, how does The Conjuring: The Devil Made Me Do It stand alongside the other occult adventures of the infamous Warrens?

The Conjuring: The Devil Made Me Do It – What’s It All About

The Conjuring: The Devil Made Me Do It starts off running with a rock-solid opening sequence of the Warrens performing an exorcism on young David Glatzel (Jullian Hilliard). This first 10 or so minutes really does feel like a highlight reel of the high quality scares the franchise is capable of. Everything is loud and urgent as the Warrens battle an entity that twists and breaks this child before their very eyes.

Just before opening credits, David’s (basically) brother-in-law, Arne (Ruairi O’Connor), implores the demon possessing the young boy to take him instead. Eyes go white, but the danger passes, and all think it’s mission accomplished, but this is really the calm before the storm of what is claimed to be one of the most sensationalized stories in the career of the Warrens.

From this point on, we’re in the meat-and-potatoes of the plot. After a medical scare caused during the initial exorcism, Ed and Lorraine realize that there’s more to this case than they initially thought when Arne is arrested after committing murder. As the title suggests, though, the Warrens are convinced that Arne cannot be responsible for what he’s done and go on the hunt for the sinister machinations at work against this innocent young man.

RELATED: Economic Anxiety In Ti West’s The House of The Devil

How It All Comes Together

The Conjuring films are pretty enjoyable. Easy to digest, like an old ghost story, which is just fine. These films don’t need to have the same teeth as contemporaries like Hereditary or the Lighthouse.

The Conjuring films take elements from all subgenres and eras of horror and package them neatly for a mainstream audience, like a perfect gateway into the genre for less adventurous viewers. The previous two films did this job better than any other studio horror film had done for years.

Unfortunately, creative changes in the production of this new entry seemed to have unfocused this franchise a touch.

There are many moving parts in The Devil Made Me Do It, and not all of these parts are fully resolved. Whereas James Wan’s direction has always been tight, Michael Chaves’ feels disjointed. He doesn’t focus on any one element long enough to really create a connection with the audience. Characters are constantly being moved along in the plot for the sake of reaching the climax.

For example, why don’t we see more of John Noble in this film? He dominates any scene he’s in and offers several exciting avenues to explore regarding the Warrens. He plays a holy man who was broken when he stared into the darkness and blinked, and, in the film’s climax, feels responsible for all that has happened because of how he shared that darkness with others in his life. Why Chaves passed up the opportunity to play Noble as more of a foil to the Warrens is beyond me.

Something else would be a deeper preoccupation with satanic panic, which one can tell is sitting underneath the plot given the period but is never fully explored. That might be the most significant missed opportunity in The Conjuring: The Devil Made Me Do It because it would have been the first time the franchise ever attempted to wrestle with what really used to give people scares back in the day.

Speaking of scares, while there are quite a few in this film, some even packing a punch, Chaves does not have nearly as much fun with the audience as Wan has in the past. I always go back to the extended darkroom sequence in the second film where Lorraine Warren is trapped in darkness with her painting of The Nun. Or, is it the Nun?

The sequence is excruciatingly drawn out as the strings in the soundtrack swell, pulling moviegoers to the edge of their seats against their will. I know—I went to see The Conjuring 2 on opening night, and the entire theater was forced to endure the wait for a scare they knew was waiting to jump right out at them.

There is nothing quite as thrilling here, unfortunately. I wouldn’t even say the scares are more subtle but rather less carefully crafted, which is never fun.

The first two Conjuring films feel firmly situated in the 70s. They have the barren, bleak atmosphere of 70s devil films that populated the cinemas after the Exorcist’s release. For a movie taking place in the early 80s, it sure does feel like it could occur in the present day because there are no subtle historical touchstones or aesthetic compositions used to bring out its setting.

The result is that, much like the characters seem to drift forward in the plot because they have to, the set pieces and visuals of the film are crafted so that they just have to be there. There is no intent other than being in a shot.

However, I don’t think anything going on behind the scenes could ever stop the franchise’s best weapons: Patrick Wilson and Vera Farmiga. These two know these characters like the back of their hands. While Ed and Lorraine are somewhat detached from the other characters in The Devil Made Me Do It, they know how to make the most of their scenes together. Their chemistry still brings out the warmth and love that these fictionalized renderings of the Warrens need to have to conquer the powers of darkness.

Are Patrick Wilson and Vera Farmiga enough to save The Conjuring: The Devil Made Me Do It, though? Yeah, they are, and they’re not the only element saving this picture. Despite a disjointed plot and lacking atmosphere, many exciting things are introduced throughout this film worth paying attention to. Just don’t expect all of them to pay off in the end!

And, honestly, Patrick Wilson and Vera Farmiga doing their thing as the Warrens creates at least a sense of familiarity from the other two Conjuring flicks to keep diehard fans of the series happy. However,  The Conjuring: The Devil Made Me Do It tells the story of the Warrens’ most significant challenge yet, and, in this case, it isn’t demon possession. It’s creative missteps.

Did You Watch The Conjuring: The Devil Made Me Do It?

We hope you enjoyed our The Devil Made Me Do It review! Did you watch the film? What did you think? Let us know on social media!