Examining the tragedy of ageing with David Cronenberg’s body horror classic - The Fly! 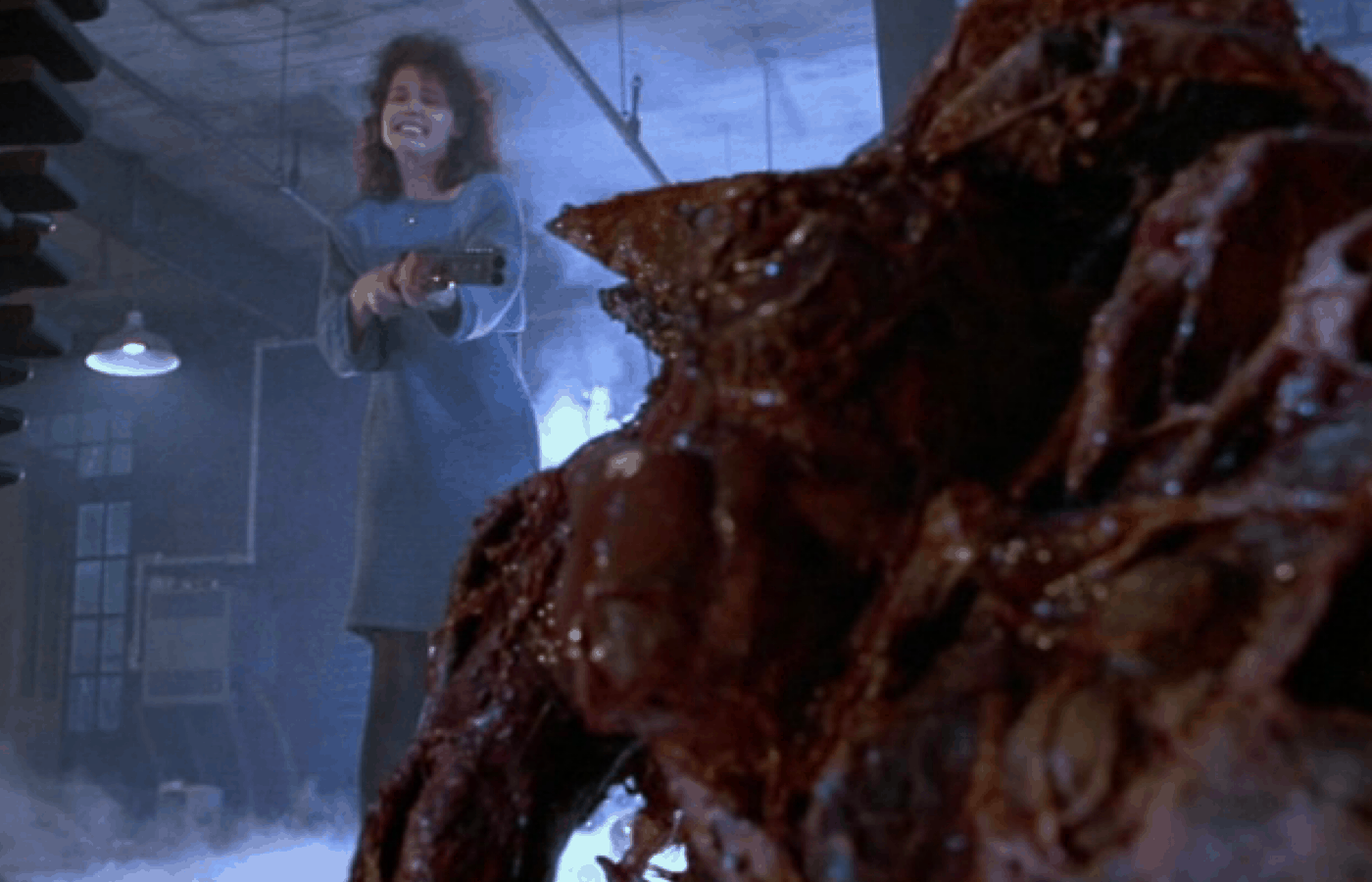 Everything becomes too much to handle and we are left wanting to end all the suffering. But everything leading up to this moment is just called life and the best way to deal with aging is to just enjoy the ride.

David Cronenberg’s depiction of a body horror tale is so beautifully repulsive that the urge to look away is overpowered by our curious minds as we continue watching in awe and in disgust.

On the surface level, we get a body horror story about a mad scientist with an experiment gone awry. But down at its core, we get a story about aging; the process of aging and how our mind is stagnant while we watch the deterioration of our decrepit body. Our bodies slowly coming to its inevitable end with us having no say.

The film begins with Dr. Seth Brundle, played by Jeff Goldblum, in his natural habitat. He is among his peers in a science conference getting interviewed by Veronica, played by Geena Davis.

Intriguing her with his charm about his passion project, Dr. Brundle lures her into his lab. Just what is this passion project of this scientist? The project explores the ability to successfully transport an inanimate object from one pod to another.

His final intention is to transport a living creature. After a second visit, Veronica agrees to observe and report on this experiment. This is when David Cronenberg’s second story begins.

The Joy of Adolescents

Do you remember those hot summer nights during grade school? The ones where you could stay up all night and still have loads of energy the following day? Bike riding all day and running around getting up to shenanigans. Eating whatever you want with no remorse. The sweet tooth that couldn’t be fulfilled. That feeling of sheer joy.

This is exactly how Dr. Brundle felt the following night after the first successful transportation. Veronica woke up to him exercising. But not your typical push-ups, Seth began doing aerobic bodyweight stretches and exercises that only trained professionals are experienced with. Seth woke up with the energy of a child.

“I feel very coordinated. And very energized. I feel as though I work better, physically.”

Alongside the unlimited source of energy, children are also known for their uncontrollable sweet tooth.

“Do you normally take coffee with your sugar?”

During the coffee shop scene, Seth showcased just that. As he talks about the purging from the teleportation, Veronica noticed the abnormal amount of sugar he puts in his coffee.

As fast as your childhood comes, it goes. During the end of the coffee shop scene, Dr. Brundle begins to enter the teenage years. The years full of arrogance, hormones, aggression, and sex. This begins with Seth aggressively looking for the waiter at the end of the scene.

From there we see Seth and Veronica making love. She mentions how they have been at it for hours and is surprised he can still keep on going. The aggression begins to resurface when Seth wants Veronica to try the “born again teleportation”. When Veronica rejects the invitation once again, Seth snaps.

“You’re a fucking drag, you know that?”

During this scene it is becoming visible how his body is changing. His once clear face is now full of unexplained acne and bodily hairs. Although he is particularly fond of the hairs, as most younger boys are. After his monologue about the flesh in anger, he slams the door behind him in his teenage angst.

Seth leaves his laboratory and heads to a dive bar in search of another specimen to enter the plasma pool of the dynamic duo. Upon arriving, Seth notices a lonely woman and a pair of men arm wrestling. Talking in a lofty manner, the pair notices his egotistical ways and asks him to leave. In response, Seth challenges them to arm wrestle to which they abide. In a manner of seconds, Seth wins the duel in a grueling way and then the girl.

Once Seth goes back to his lab with his newfound prize, he enters adulthood full of sex, drama, and more physical changes. Seth is excited about entering this new stage in his life. He wants others to join him. Just like how teenagers feel once they enter adulthood, roughly around eighteen years old. They feel this new vision of life and how great it is to be alive and different than before. Their prior selves being inferior to what is to come.

This is how most kids feel entering the joyousness of adulthood.

After his one night stand and second failed attempt at building a dynamic duo, Veronica shows up. She scares off the inferior being and takes on Seth head-on. She mentions how there are insect hairs within his body. Angry with her attempt to fix him, he kicks her out, but her words stayed with him. After her leaving, he examines himself in the mirror.

We are now entering David Cronenberg’s specialty of body horror. Bodily mutilations never looked so grossed. The bathroom scene is the beginning of this horror and one of the most iconic, as it is both disgusting yet tragic. It depicts how adults look at themselves after noticing some changes. Adulthood is the longest duration of our lives. Even though the majority of changes happen through puberty, physical changes are still apparent and more drastic.

When we first notice these changes we are in shock and in disbelief of how this is happening. We try to come up with excuses of why this is happening, but it’s inevitable for everyone. This leads into old age. When our bodies are the most fragile, but our minds are the most vibrant. We become desperate; desperate for a reverse change, for connections, for anything to happen except what currently is.

“I’ve gotten much much worse. Please come see me.”

Through all these changes, all that’s left is acceptance as we enter old age. We begin to see Seth’s acceptance of his changes, beginning with the gloves in his hands when trying to figure out what happened. But after a month, he finally decides to call Veronica for help. This is when we see just how bad Seth has gotten. How much his body has changed for the worse. He appears walking with a cane and a little hunched over, just how you would expect an elderly person to look of typically 70-80 years old. His hair has fallen out and his skin tone has changed.

“Every time I look in the mirror, there’s someone different, someone hideous, repulsive.”

When facing death, many react to it in different ways. Some will accept it in harmony, others in regret and some will laugh about it to shield their true emotions. Acceptance isn’t just meant for the dying, but for the living as well. Others will try to deny it to the bitter end, trying to come up with ways to prolong the inevitable.

“I don’t accept that. There must be something we can do, you know, someone we can go to, tests that can be done.”

But in the end, both have to accept his fate to continue peacefully.

“I know an old lady who swallowed a fly, perhaps she’ll die.”Children’s Song

Time for the inevitable. Assuming we reach this stage conscientiously, before our natural/sickness death. This part is the worst. The person isn’t recognizable anymore. Body parts fall apart, hypothetically, and in this case literally. We notice this first by how disfigured and deformed Brundle’s face is when he is trying to do computer work and the computer doesn’t recognize his voice.

From there his teeth begin to fall out, leaving him with gums only. As he goes to the restroom to investigate, he opens his bathroom cupboard as we see multiple body parts that have been failing sporadically.

It’s clear he is more hunched back afterward. Not just his face, but his whole body is disfigured and deformed full of lumps and concaves.

“My teeth have begun to fall out. The medicine cabinet’s now the Brundle Museum of Natural History. Do you want to see what else is in it?”

Eventually, everything becomes too much to handle and we are left wanting to end all the misery and suffering. Towards the end, it wasn’t even a life that is being experienced. And the best thing to happen would be to put an end to it. But everything leading up to this moment is just called life. And the best way to deal with aging is to enjoy the ride.