The Lavender Scare in Night of the Blood Beast (1958)

Blood Beast does offer a unique look into the plight of the LGBTQ community during one of its most persecuted moments in U.S. history. 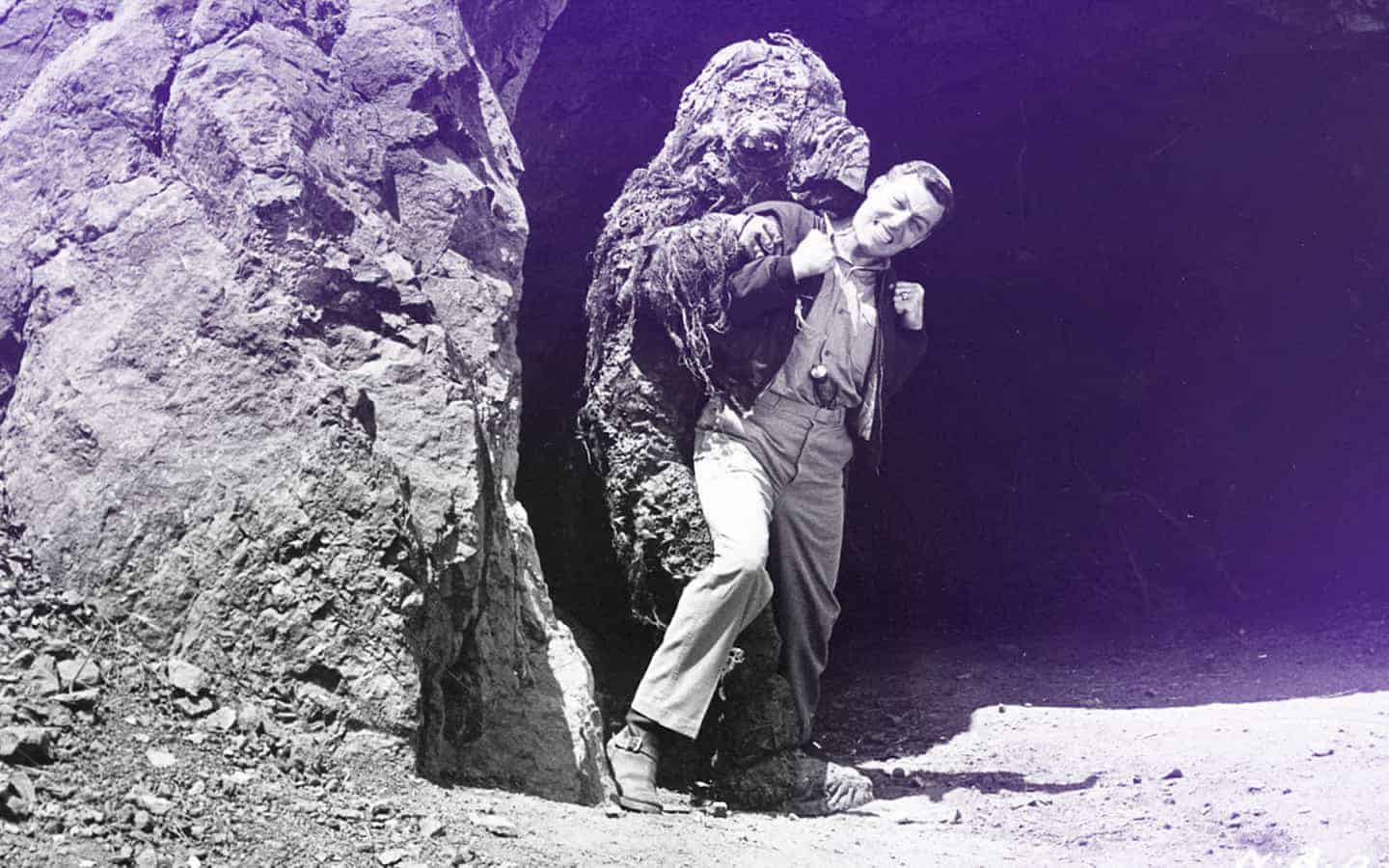 ‘Blood Beast’ does offer a unique look into the plight of the LGBTQ community during one of its most persecuted moments in U.S. history.

Film scholars agree that almost all of the creature features of the 1950s were wrestling with the dilemma of the Cold War and the anxiety of looming and the ever-growing threat of nuclear power. These themes were, of course, hidden in whatever subtext could be found in the scripts of these films as the number one objective was always catering to the genre’s teenage demographic. But, the subtext was always there.

Alien invaders were rubbery yet thinly veiled metaphors for Soviets and Communists looking to infiltrate, interrupt, and eviscerate American society and morals. This is certainly true of Night of the Blood Beast (1958), which concerns a team of nondescript scientists who find themselves in the crosshairs of a hideous extraterrestrial invader.

Metaphors for the Space Race and general unease of American society are certainly present in this Roger Corman produced cheapie, but (maybe surprisingly so if you’ve seen Blood Beast), there is another, perhaps more engaging tension layered beneath the typical Red Scare themes that are related to the Lavender Scare and problematic attitudes towards homosexuality and queerness in America during the 1950s.

Night of the Blood Beast begins with a rocket manned by astronaut John Corcoran crash landing after being hit by an unidentified object. A support team of scientists, including John’s fiance, Julie, find the astronaut dead, but are perplexed by several oddities that make this death completely unnatural, such as the absence of rigor mortis, but the presence of blood pressure.

Later, though, they are further sent into shock by John’s unexplainable resurrection. And all the while, they wrestle with the ravaging alien menace that has cut off their communication from the outside world and trapped them on their base.

It is eventually revealed that this monster has seized the body of John in order to incubate its young and birth an alien army to conquer Earth. The conflict that this plot point (perhaps an early example of body horror) creates between the astronaut and his friends carries us through the film’s short 62-minute runtime, with the monster appearing sporadically, and while this was likely due to budgetary restraints, the interactions between the humans does offer an interesting insight into the taut and uncompromising morality of 1950s America.

While much of what screenwriter Martin Varno had to say about the Night of the Blood Beast concerned his severe underpayment for the script, there are interviews of Varno’s and others involved in the production that suggest his story was inspired by the Space Race and the general anxieties of living in the United States during the Cold War.

The grotesque Blood Beast is certainly as apparent a metaphor for the “evil communist” as any other in 50s genre film, so the Red Scare themes are in full force. However, Varno’s admitted eye on current events, and the implications made in the film concerning otherness, ideology, and the body, rather than simply otherness and ideology, it is entirely possible that issues raised by the Lavender Scare also snuck into the film’s script.

The Lavender Scare: Beasts Out For Blood

Existing under (and largely living beyond) the totalitarian umbrella of McCarthyism, and running parallel to the Second Red Scare of the 1950s, the Lavender Scare was a campaign against the already oppressed and targeted LGBTQ citizens of the United States, specifically those who held any level of federal employment.

A famous case that occurred shortly before Blood Beast began production was that of early gay rights activist, Frank Kameny, who was dismissed from his position as astronomer for the U.S. Army after he was discovered to be homosexual. Kameny’s removal from his career was only one of hundreds of unfortunate cases os queer people being forced out of work by politicians.

These persecutions grew out of post-WWII concerns of maintaining traditional American values in the face of changing social and political climates. Homosexuality had been a quieter concern for a number of years when compared to communism until Joseph McCarthy began seriously pushing for an attack on LGBTQ federal employees based on the belief that these people were not only threats to that traditional American way of life he and so much of the country was desperate to hang onto, but also incredibly high security risks.

McCarthy would link homosexuality with communism to further his agenda, asserting that queer people were susceptible to blackmail and communist recruitment because as homosexuals they had what he called “peculiar mental twists.” From here, the political discourse continually associated queerness with communism.

Members of McCarthy’s homophobic subcommittees would villainize gay people and paint them in the same light as communists—morally bankrupt degenerates and mental weaklings who operated within shady subcultures, recruiting otherwise normal Americans, which are all harmful stereotypes that persist even today. As these subcommittees pushed their agenda, LGBTQ citizens were interrogated, humiliated, sometimes arrested, and forced from their livelihoods.

Despite the fact that any “names named” during the Lavender Scare did not reach the public, the press did report on the witch hunt, celebrating the efforts of supposedly decent politicians to expunge perverts from the Capital, though it was never as often as the Red Scares.

Homosexuality was being discussed in relation to the growing fear of communism, though, and regardless of exact intent, the themes of the Second Red Scare prevalent in Night of the Blood Beast also seem to be married with the Lavender Scare, just as the two campaigns were in real life.

The uneasiness the scientists feel after the discovery of John’s impregnation is immediately evident. It was concerning enough when John’s body in death did not resemble normalcy, but it is the means of his resurrection and new bodily function that truly disturbs the rest of the crew, which plants the seeds of mistrust that bloom when head scientist Dr. Wyman is found murdered.

Because of John’s abnormality, the crew is quick to blame him for the crime. He isn’t normal, like the rest of them, so he must be responsible. The revelation that the murder was, in fact, committed by the monster stalking them from the shadows makes little difference either, as John’s reputation is further tarnished in the eyes of the crew by his unusual psychic connection to the Blood Beast.

This connection prompts John to urge his friends to see this creature as a misunderstood visitor who should not be condemned simply for being different—a plea that falls very much on deaf ears and instead throws more gas on the fire of the crew’s suspicions, who believe in nothing else but the Blood Beast’s manipulation and John’s treachery. In the eyes of the crew, John has been “recruited” by the villainous, penetrating alien invader and now operates in the shadows with the Blood Beast to first destabilize this research unit, and then the rest of America and the world.

These plot developments eerily resemble the bigotry upon which the Lavender Scare and its anti-LGBTQ propaganda spreading subcommittees were built, especially considering John’s sanity and virtue only come into question because of his impregnation, or his feminization. The heart of the matter is really that his body is not masculine like it is supposed to be.

As far as the crew is concerned, John has been recruited by the Blood Beast just as McCarthy and other practitioners of his severe strain of conservative politics believed the LGBTQ community would be recruited by the communists and dismantle American society, just as the Blood Beast plans to do through John. The unsympathetic treatment of John as Blood Beast trudges towards its conclusion is characteristic of both the genre films of its era and the contemporary public opinion of queer people.

The astronaut is never given any benefit of the doubt. He is monitored and mostly kept indoors so that he may be kept from causing trouble because he cannot be more than a villain. Under the subjugation of the film’s primary villain, sure, but a villain nonetheless, which is the fate of any so-called abnormal character in a film under the thumb of the Hays Code. Such a character’s fate is sealed the moment they are seen as different, which is the same attitude afforded to the LGBTQ community during the 50s (and very much beyond).

So, this is why John’s plea for friendship comes off as so ludicrous to the crew and, by proxy, the audience—because there was no way someone like John could be a good person in this obtuse society. When John and the Blood Beast meet their fate in the climax of the film, it is treated as a victory well won by the crew, like the victory of the Lavender Scare’s subcommittees was treated in the press.

Today, though, it plays rather depressingly, as countless LGBTQ youths and adults have stood where John stood, confronted by their friends and loved ones who are unwilling to listen because they cannot reconcile the otherness they are being presented with.

The Lavender Scare has remained relatively unknown, unlike the Second Red Scare that it ran alongside. Though this is changing as more and more LGBTQ history is being exhumed and discussed, it seems that the effect of this particular pocket of McCarthyism may have had on cinema has yet to be fully explored.

The genre films of the decade are famously known for wrestling with the anxieties of communism, but when the connection between this ideology and LGBTQ citizens was so strongly constructed by bigotry in the U.S. government, it is possible that the otherness demonized and routinely conquered in countless genre films of the decade by significant streaks of patriotism could include queerness as well as the communist.

In the case of Night of the Blood Beast, the horrors surrounding the Lavender Scare seem to be playing out in typical 1950s fashion. While there is certainly no interrogation of this witch hunt’s prejudice to be found in the film, concerned instead with a battle to maintain the status quo, Blood Beast does offer a unique look into the plight of the LGBTQ community during one of its most persecuted moments in U.S. history through the lens of the much-beloved rubber monsters, cheap effects, and cheaper acting of 50s horror and sci-fi.