The Only Girl in Line to Meet Leatherface 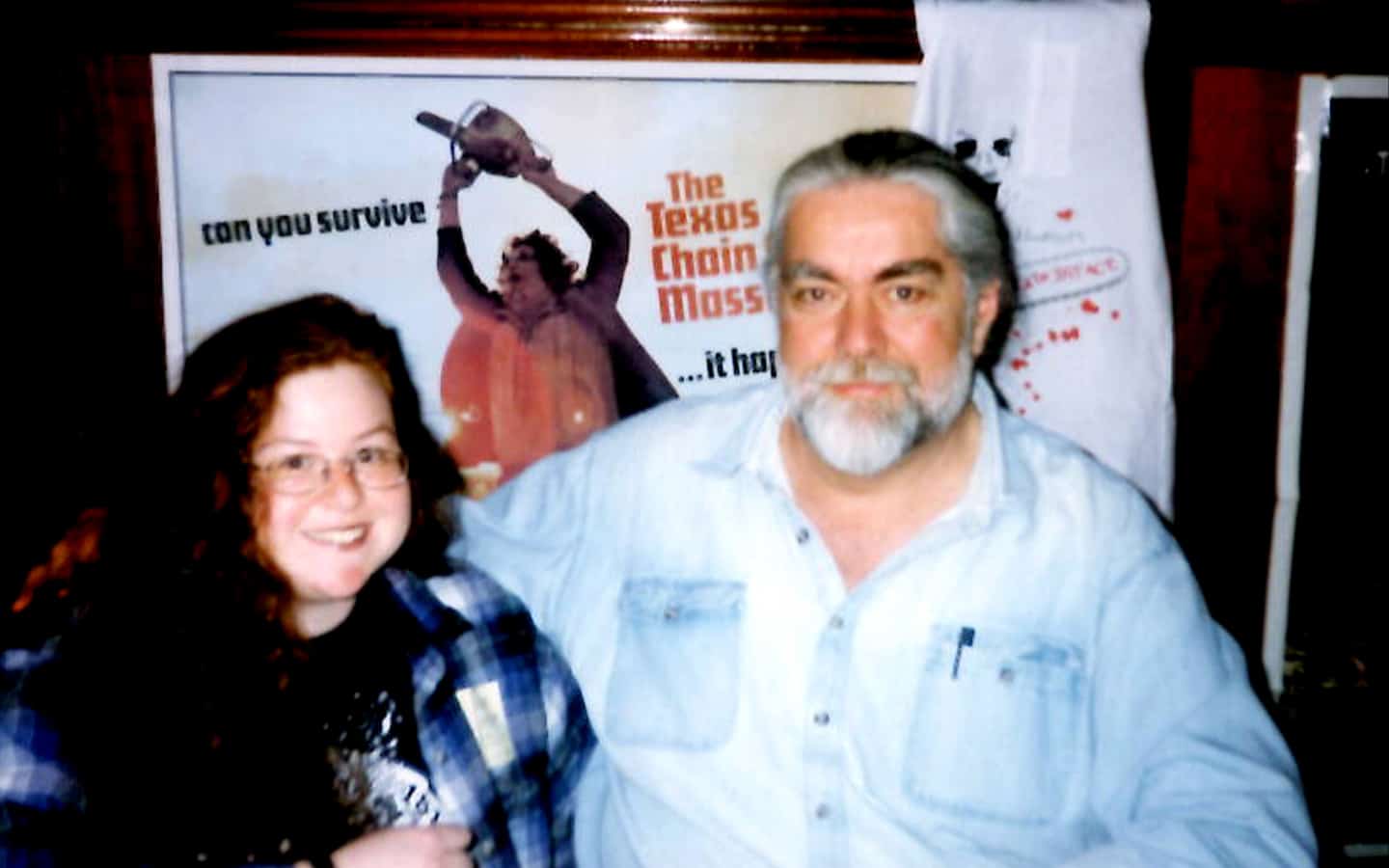 A look at what the world was like for a female fan in the male-dominated world of comics, sci-fi, and horror in the 1990s.

Gather around and I will tell you a tale of a time long ago…called the 1990s. As a teenage female fan of horror, science fiction, and comic books, I was known for being in spaces not appropriate for girls. I remember that I never had to introduce myself when calling my local comic shop to ask for new Doctor Who magazines or Tales from the Crypt re-issued comics only for them to reply every time, “No Vicki, we know you are looking for them and will let you know when they come in.” I was the only girl making these requests, so I stuck out.

Sticking out like a sore thumb was what being a girl at a convention was all about in the 1990s. I used to say that there were three types of females that I would see in lines at shows: (A) parents or guardians of kids too young to go to a con by themselves and (B) girlfriends and wives humoring their significant others.

You could easily tell those that fell into these categories because they brought a book or magazine to pass the time, looked bored, and were often only nearby to hold a camera. And then there was (C) otherwise known as me, my sister (and our friends). We were two of a handful of women that were comfortably letting our freak flags fly as we stood in line to meet the stars of our favorite horror and sci-fi films. There were so few of us, that you could count us and be excited if you hit double digits.

My sister took me to my first convention in 1994. She and her husband would go annually and when I hit 17 they decided I was old enough to come along. The local show in Central/North Jersey is Chiller Theatre which always had a focus on all things science fiction and horror from the classics of the 30s and 50s to the modern as well as the indie producers.

That first show I attended we met Bill Hinzman and John Russo of Night of the Living Dead, Tura Satana and director Ted V. Mikels of Doll Squad fame, Jason himself, Kane Hodder, horror host legend Zacherley, Ed Wood star and ex-girlfriend Delores Fuller and the king of the monster kids and original fanboy to create an empire, Forrest J. Ackerman. We were in heaven. We started going together, sometimes bringing other friends, on a sort of annual pilgrimage while her husband scoured the vendor halls for deals on hard to find Hong Kong Martial Arts and Japanese Kaiju flicks.

Then we decided to up our game and take it to the big leagues. We heard that my hero, George A. Romero, was scheduled to appear at the Fangoria Weekend of Horrors at the New Yorker Hotel in NY City in 1998. We hopped on the train and went to the convention. This was truly what I had been waiting for.

Romero was the longest wait we had ever had to meet someone before but it was all worth it (especially since back then you never paid for autographs at Fango events). The day was miraculous as we attended a Phantasm reunion (with Angus Scrimm, Reggie Bannister, Michael Baldwin, and director Don Coscarelli) as well as Q&As with both Romero and special fx mastermind Tom Savini. But it was clear that there were even fewer other women in attendance than at our usual Chiller Theatre haunt.

It’s sad to say, that this trend was the norm for years to come. It was also apparent that not all of the filmmakers and stars were used to having female patrons at their tables. There were several odd occasions I can remember where some of the stranger filmmakers thought meeting sisters was particularly exciting and tried to get a quick kiss or cop a feel.

It just goes to prove that some people’s films are not much different from their real lives. On the same list of awkward moments, there were scream queens that would not know how to drop the shtick they would use on their male fans when a woman was next in line. Also odd were the moments when I found myself to be the only female in line to meet someone known for the particularly grisly fair.

I would love to be able to report that once the 2000s rolled in, everything changed for the better, but you all know that isn’t true. As I started to expand beyond just Chiller and Fango I did start to see some noticeable changes though. My then-boyfriend and now-husband started hitting more comic, anime, and gaming events and I could start to see patterns forming. Comic conventions, like the NY Comic Con and even the smaller local guys, started to become more family-oriented over the years. This is particularly more apparent once comic-based films and tv shows really started to take over the box office and airwaves.

Even horror events that were further from home, like the Maryland based Horrorfind Weekend (RIP) and South Jersey Monster Mania Con, started to include families of four and had Mom’s that were the fans that got their kids into the genre. But it was anime shows, like Castle Point and Anime NYC, and video game events, like Too Many Games, that were truly eye-opening experiences for me. All of a sudden, there weren’t just more girls and women, but now I noticed just how white and straight the usual horror con crowd was (at least in NY/NJ).

I like to think that I started to see these changes because society finally got over the fanboy/otaku ideals of the past – that all fans of comics, sci-fi and horror were geeky white boys with thick glasses and bad skin – but I think there is more to it. Not only did the idea of who could like these genre offerings were, but what constituted obscure vs the mainstream has changed too. Growing up it was not easy to find the things we wanted. We had to scour every hobby shop, comic store and mom & pop video store for miles to try to find the things we still needed to watch or read.

You would trade fifth-generation VHS tapes with people you met at late-night screenings and conventions to try to get imports long out of print. It was a different world. Today it is cool to be into comics, read fantasy novels, watch Star Wars movies, and all the new re-made horror flicks. If you aren’t sure, look at the box office numbers for sci-fi and horror films today, or remember that there was a very recent time when the top two tv shows in the country were The Walking Dead and Game of Thrones. And we don’t even need to discuss the money Marvel and DC movies bring in. Like I said before, it’s a totally different world.

In the end, we were never dissuaded from going to cons because of how lopsided the male to female ratio was. It was just how things were. We never felt the need to complain to a convention about the way the guys acted or how sexist things could be. It went along with the territory of being part of fandoms that didn’t embrace the opposite sex. These days are definitely different and what we will tolerate has changed for the better (especially positive additions such as Cosplay Is Not Consent policies and stricter enforcement of anti-harassment rules). Back then we just dealt with it and, in many ways, had been dealing with it for years. You see, my sister is a drummer in many, many bands and I have been a guitar player most of my life. We were the tomboy poster girls and are a couple of tough chicks.

As far as going to horror and sci-fi cons, we were barely fazed by how male-dominated the culture was because we were there for us not them. I would never have given up the experiences we had and all the great people we met back then before cons became big business. It may sound ludicrous to say it, but sometimes I miss those days of going to Chiller and finding a parking place easily and paying $15 bucks for an autograph, even if we were the only girls on line to meet Gunnar Hansen aka Leatherface.