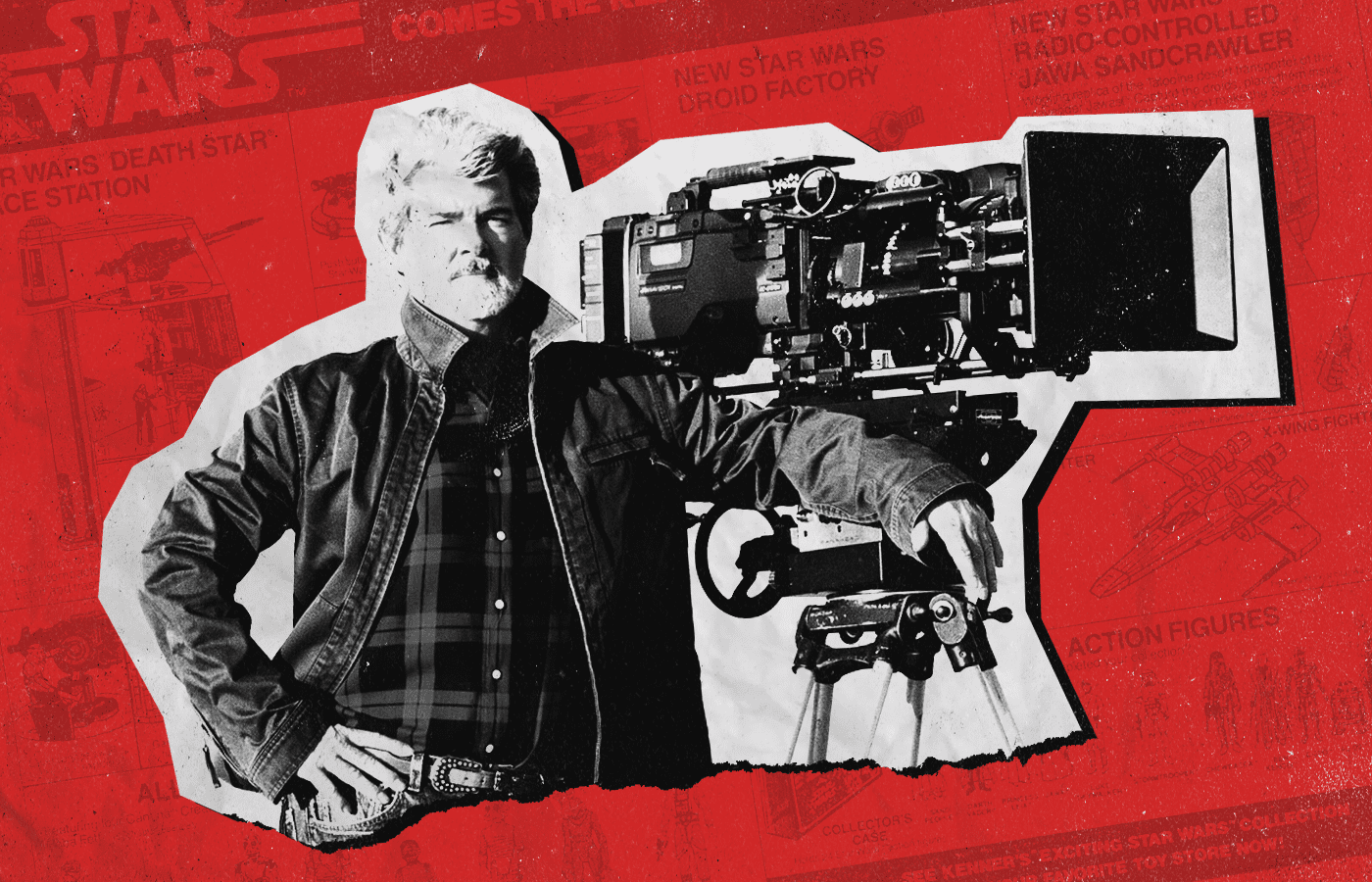 How George Lucas Made A Toy Empire From Star Wars

In one of the best scenes of Mel Brooks’ 1987 comedy Spaceballs, we get a satirical look at Star Wars merchandise via the Yoda parody Master Yogurt (Mel Brooks). “Merchandising! Merchandising! Where the real money from the movie is made!” is a line that speaks the truth as to this day Star Wars remains a juggernaut with its merchandise. With a net gross of 69 billion and rising, Star Wars remains one of the highest-grossing media franchises of all time.

From toys, t-shirts, home decor, electronics, and so on, you can practically live your life based entirely on Star Wars merchandise. But it was one decision during the creation of the first Star Wars film that truly lead to this point of modern pop culture merch. While many have mixed feelings about George Lucas’ place in Star Wars, one cannot overlook the sheer foresight and ingenuity he had for both Star Wars as a franchise and its effects on pop culture. As such, let us look at how George Lucas made a galaxy-spanning empire from Star Wars merchandise.

A Long Time Ago In A Film Studio Far, Far Away…

After the release and success of American Graffiti in 1973, George Lucas wanted his next film to be “a western in space”. In the 1970s, the cinema landscape was changing thanks to films such as Jaws where films could be marketed as must-see blockbusters, drawing in enormous crowds. Also, we saw an ever-growing rise of tie-in merchandise to films and other media giants such as MEGO’s line of highly successful superhero figures and Mattel’s Shogun Warriors.

The issue is, however, that this change in the film industry made film studios unsure of what will resonate with audiences and what won’t. While in hindsight, we know Star Wars would capture the imagination of the world, in 1977 no one had any idea if this film would sink or swim. After being rejected by several film studios, Lucas would eventually find a potential studio in the form of 20th Century Fox (which is ironic as both Star Wars and 20th Century Fox would be owned by Disney) and studio head Alan Ladd Jr.

The next roadblock would be the decision that would change the media landscape forever, as Fox’s other executives were still very wary of green-lighting Lucas’ film, now under the title of Star Wars. After some negotiation, Lucas would agree to pass up an extra $500,000 directing fee for complete ownership over the licensing and merchandising rights. One can assume that those executives are still kicking themselves over that decision.

Now having complete control of the merchandising rights and the right to license out the Star Wars brand to anyone of his choosing, Lucas would be unprepared for the monster he has gained control of once he licensed Star Wars to various comic book publishers such as Marvel Comics (again ironic as they too would be owned by Disney) and toy company Kenner. Lucas would license Star Wars to Kenner before the film’s release for a flat fee of $100,000 after several other companies turned him down.

But then Star Wars would be released in theatres on May 25th, 1977 and the world of pop culture cinema would never be the same. The film would become the highest-grossing film grossing over $550 million on a budget of $11 million. Moviegoers were in love with the exploits of Luke Skywalker battling the tyrannical Empire and Darth Vader. So when the Christmas season would arrive that year, everyone wanted Santa to bring them some Star Wars goodies.

Completely unprepared for this demand, Kenner would create an “Early Bird Certificate Package,” basically a pre-order for four figures (Luke Skywalker, Princess Leia, Chewbacca, and R2-D2), a display stand, stickers, and a Star Wars fan club membership card. These packages sold like gangbusters and the complete set remains some of the most sought-after vintage Star Wars merch ever.

In 1978, Kenner would add more characters to the original Star Wars line from major players like Darth Vader to background aliens from the Cantina scene. The idea of having merch based on every single background alien and droid would stem from Lucas wanting every character he created to be represented now having complete control and this paid off big as the original Kenner Star Wars figures would sell out across toy shelves.

This success would not go unnoticed as soon other media franchises would jump on the merch bandwagon as by the time we reached the 1980s and the Ronald Reagan administration’s deregulation of advertisement led to the toy-centric craze we nerds know and love. By the time the sequel to Star Wars: The Empire Strikes Back, was released in 1980, Lucas and Kenner were ready! Not only do we have the action figures, but we’ve gotten lunch boxes, bed sets, shower curtains, t-shirts, and any form of goods to slap that Star Wars logo onto.

In the present, it’s now almost a mundane thing to see someone with a t-shirt with Darth Vader on it or pass by the toy aisle at Wal-Mart and see the latest RD-D2 toys, but the fact Star Wars has bored itself into the collective consciousness of our lives to that point just shows just how massive of an impacting the Star Wars merchandise had on popular culture. We still go crazy for the new Star Wars merchandise as we saw with how everyone wanted to get themselves merch based on The Child/Grogu/Baby Yoda once he debuted in The Mandalorian. And without the success of Star Wars merchandise, we probably won’t see all the other nerd goodies we get today, so maybe Master Yogurt was right on the money, both figuratively and literally!