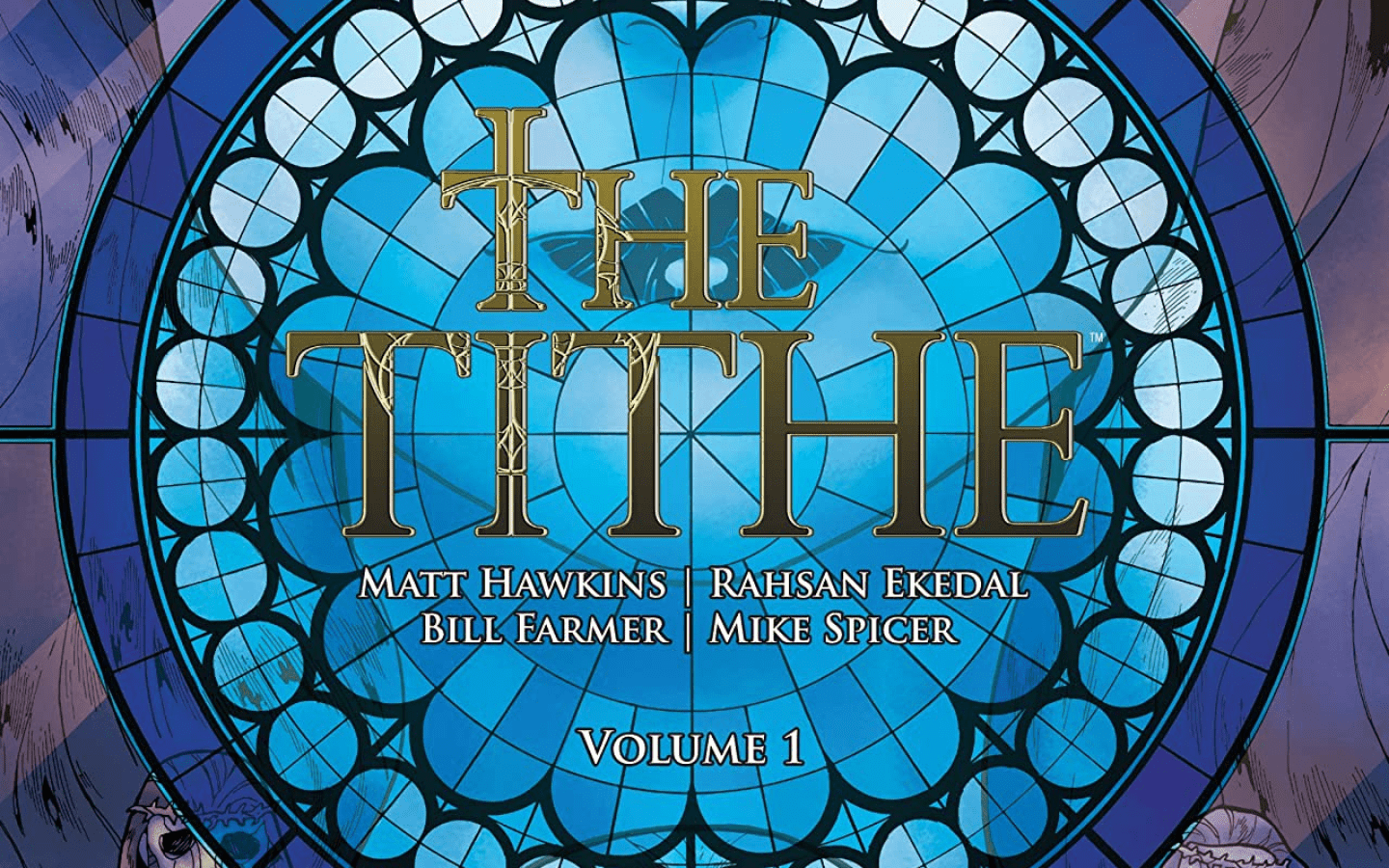 About The Tithe Volume 1

The Tithe Volume 1, created by Matt Hawkins and Rahsan Ekedal, adds a creative spin to the idea of the proletariat vigilante. This comic is a property of Top Cow Productions and is distributed under Image Comics. The Tithe tells the story of a secular vigilante hacker collective known as Samaritan who targets corrupt megachurches.

This is a spoiler-free The Tithe comic review.

The tale of the vigilante hero has been around about as long as humans have been settled and civilized. Regardless of the presence of a formal government, every civilization throughout history has developed a set of rules for it’s members.

Over time, while humans transitioned from tribes into larger societies, the rules became more complex. Humans started developing laws and regulations in order to maintain a peaceful society.

As a society grows it becomes increasingly difficult to form a set of laws which encompass the views and philosophies of every individual. This leaves gaps and overlaps which may cause people to deter from their rulers.

All of this is occurring on top of human imperfections, political and religious struggles, and competitions for resources. In a system with all of these moving parts it is not strange that individuals would take the law into their own hands in order to right some wrongs.

Most of us are familiar with the story of the classic vigilante hero known as Robin Hood. Stories of Robin Hood can be traced back to ballads and poems in the 1300s. He stood in the face of the corrupt and greedy leaders in order to increase the quality of life for the common folk.

Comic book readers will easily be able to see correlations between Robin Hood and many of their favorite superheroes. There are even storylines where Robin Hood is killed off only to have another man step up and take up the mantle.

For those unfamiliar, a megachurch is a Christian organization that draws thousands of people for their religious services. On this large of a scale, the offering plates bring in a substantial amount of money. The money collected by churches is typically used to keep the church running and to help those in need.  In many instances, the large amounts of money moving through megachurches have been used to fund the lavish lifestyles of the church staff. Many people view this as fraud, especially since religious organizations are tax-exempt in the United States.

This is where Samaritan comes into play. The band of revolutionaries steals money from these corrupt churches, leaving just enough behind for authorities to bust the churches for their fraudulent activities. Samaritan also has a duplicitous relationship with the FBI similar to that of superheroes with their local law enforcement. The authorities are trying to catch Samaritan, but at the same time benefit from their actions.

RELATED: How To Draw – 37 Tutorials and Lessons

The Tithe offers a modern take on the vigilante genre. Samaritan uses advanced hacking skills in order to reach its goals. Though hacking is not a new concept for comic books, The Tithe offers a relevant look at computer-based activism. Their style is reminiscent of real-life hacktivist groups suck as Wikileaks and Anonymous. Stories like these have been very popular in world news over the past decade. The Tithe does a great job of providing commentary on this topic.

Hacking isn’t the only way The Tithe stands out from other comics. Typically heroes target violent criminals such as a drug dealers and hitmen. This book deals with the white-collar crime of fraud. This is further enhanced by the fact that fraud is being committed by famous religious figures. Going against the church is still taboo in much of American society. Though The Tithe is not a scathing indictment of Christianity, it does give a look into the corruption that can be seen from within some religious organizations.

Ekedal does an exquisite job with the artwork. This includes creative uses of the pages such as overlapping and uneven panels. My personal favorite aspect is the style of the eyeless and cracked Jesus masks worn by Samaritan members. The masks really intensify the action-packed parts of the story. The corrupt church staff face justice by people donning the visage of Christ.

Hawkins and Ekedal came together to make a very intriguing take on the mythological vigilante hero. By combining computer technology with American society’s views of religion, readers are treated to a story that reflects the current world. Robin Hood may not have had access to the FBI’s file database, but I am sure he would have been proud of Samaritan’s revolutionary activities.

Where To Find The Tithe Comic

The Tithe can be purchased through Comixology.

Have You Read The Tithe Volume 1?

I hope you enjoyed my Tithe review! What do you think of The Tithe? Let me know on social media!