Sitting down to talk with Goosebumps illustrator Tim Jacobus about art and how much it impacts an entire generation of kids. 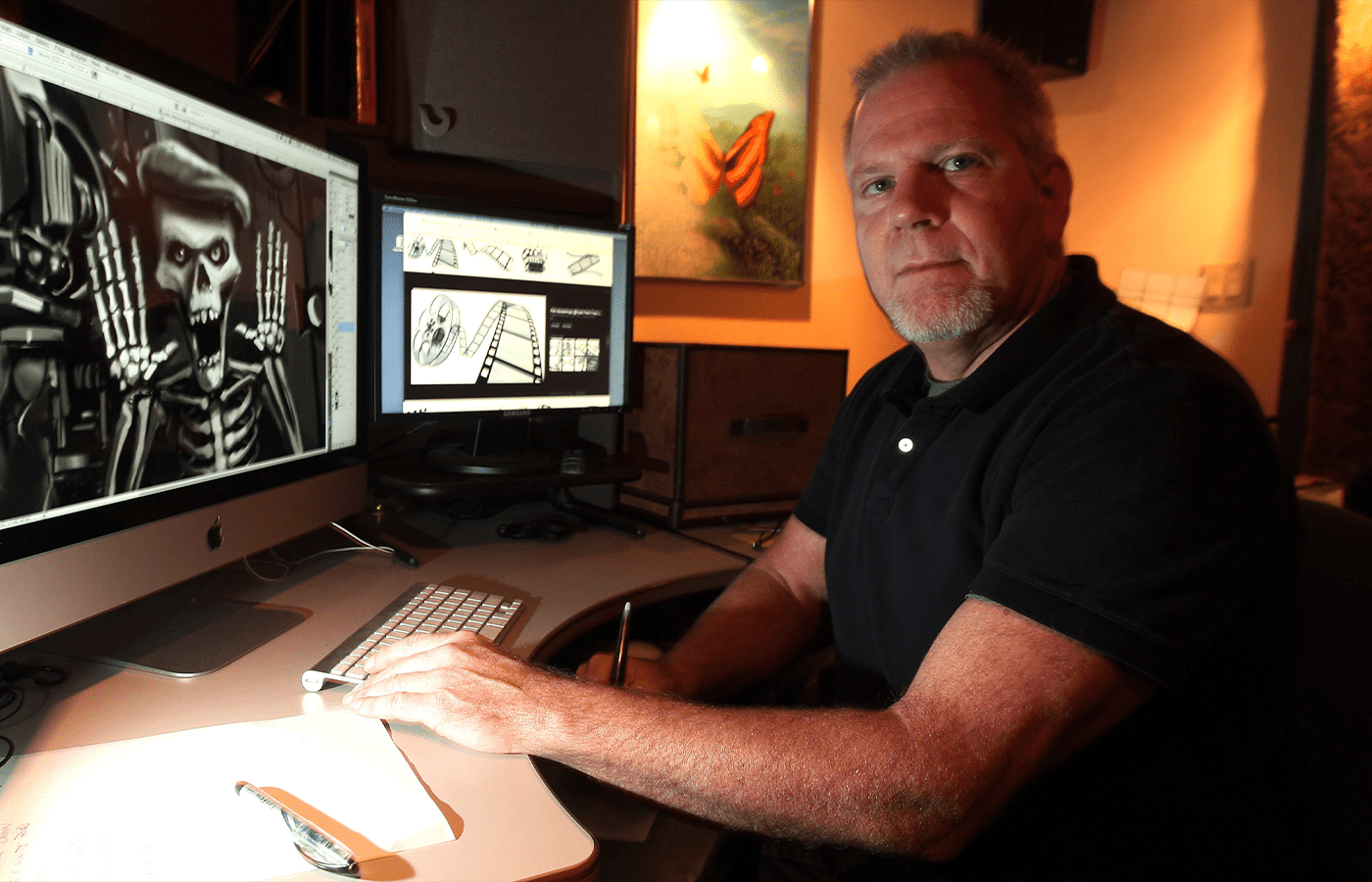 There are times where you go, “Ah, you know, this isn’t that important.” When you run into people and they tell you their stories, you see that it is important. We do forget that as a society, that art brings joy and happiness and that counts for a lot.

PHASR had the chance to sit down with the original Goosebumps cover illustrator Tim Jacobus. We get into the early days where the books sold on word of mouth alone and how the horror genre was introduced to younger generations everywhere. This interview was originally conducted for Ghoulish Cast in 2019 and was later transcribed for readability. Please note this interview was edited for clarity.

An Interview With Tim Jacobus of Goosebumps

Tim Jacobus: I had worked with Scholastic for a number of years, doing book covers and doing one-offs but no series work. I had proven myself to be a dependable and responsible person while doing a decent quality piece. When Goosebumps came along, I’m embarrassed to say, I didn’t know who R.L. Stine was and he had already had a relatively long career and had plenty of accolades, but I didn’t have any kids in that age group, so it was kind of getting past me. I hadn’t done a lot of horror up until then. I had done science fiction.

I had done fantasy. My artwork is not ultra-realistic. So, when they came up with the Goosebumps thing, it seemed really interesting to me because the one thing that R.L. Stine was always hammering home is yeah it’s hard, but there’s also a human element to it. And that really caught my attention. So, we started out the series and the publishers were leery that it was going to be successful. Nobody had really tried horror for that age group. They had done it for the age group just one up from that and had done fine, but they were worried that the whole thing might be too scary for the kids and that the schools would reject them.

The interesting part about it is, you guys remember, and I hope everybody else does, this was pre-social media, internet, all that stuff. So what got it going was literal word of mouth. You tell the kid sitting next to you in your classroom, “I think this is cool.” Then he tells the kid down the street and so on.

PHASR: I definitely think they are a huge staple. The vibrance of your covers, especially with Goosebumps, was immediately iconic. To that degree, I know R.L. Stine was pumping books out pretty fast with the original series. What was turnaround like for you with creating the covers as fast as he was writing them?

Tim Jacobus: It’s something you hear about all the time is his ability to crank these books out and he really can crank that stuff out. I forget the insane number of pages he would write before lunchtime every day. So, the books came out as fast as he could write them. Not only was he doing Goosebumps, but he was also doing Babysitters Club and a couple of other things at the same time. So, our turnaround was a one-month cycle at the beginning of every month that a new book had to hit the shelf. R.L. was writing the book at the same time I was doing the cover.

I got a short synopsis, a couple of sentences with very little information because there wasn’t any. R.L. comes up with the title of the book and then the whole story is created after that. So the information came to me in that fashion. It was like, ‘’Here’s the title, and it’s kind of about this.” And that’s all you got, which was kind of freeing. Too much information can make it difficult and puts you in a box. Luckily there was a lot of breathing room on these, so I could let my imagination run wild.

PHASR: How many covers have you done?

Tim Jacobus:  It was 63 of the original series, 26 of the Goosebumps Series 2000. And then there was a huge array of special edition books that came out at the same time.

PHASR: Out of all of those, are there any that posed the most challenge for you?

Tim Jacobus: The ones that gave me the most challenge, are the ones that came out the best. I was just shaking my head when the idea of egg monsters from Mars was presented to me. “Now this isn’t  just an egg, it’s a blob and it’s in the kitchen” and I’m just going, “I don’t know what I’m going to do with this.” I started to play around with the sketches and came up with a little something and then started to do that warped perspective thing that you see in a lot of the Goosebumps books.

That really gave it an eerie feeling, but even as a pencil sketch, when I turned it in, I was going, “Yeah, man, this one’s not going to work.” They gave me the “okay.” As I started to paint and add the colors, it really came to life. So it put my mind at ease.

And then after that, all the secondary colors that went into the drippy frame that went around the Goosebumps, what color would be used in the logo itself on that particular color cover and, yeah, the little blurbs, that was all done in-house by a handful of other people. They really knew what they were doing.

PHASR: Has there ever been a cover for a book that never got officially released that you already made pre-existing art for?

Tim Jacobus: We finished the Goosebumps Series 2000 and at some point, R.L. and Jane Stine reached out to me and said that they were thinking about putting it back on its feet again and that they had a couple of ideas for something we were going to call the “Goosebumps Gold.”

There wasn’t a publisher at the time and I don’t even know how far Bob got on the stories, but they did commission me for a couple of covers. So there’s another version of the haunted mask and there was another one that was a Christmas Story. The image was a wreath on the front door except when you look closely at the wreath, you could see the horror face inside the wreath.

PHASR: Do you do a lot of digital art? Did you use digital art on the new stuff and do you like it better?

Tim Jacobus: Probably around 2005, the paperback book business flipped overnight, and it was basically, you learn how to do this digitally, or you can’t do this with us anymore. It was a shock and it was really difficult because there are plenty of things that transfer over one-to-one.

All the techniques and all the tricks I had figured out over the 20 years that I had been cranking out Goosebumps books once a week, was now being thrown aside and they were giving me these new tools. Man, did I suck! I sucked so bad. The medium from paper and pencil or pen to digital medium is a totally different feeling on the stroke of your hand. Even with the best of the tablets and the best tablet pens, it’s not the same.

I did a lot of airbrush and everything about it was hard. I hated it at first and then it became very refreshing because it was something new.

PHASR: Do you have any stories from your journeys at conventions such as any fans that really touched you?

Tim Jacobus: What’s cool is you could see it in people’s faces because most of the hardcore fans of Goosebumps are now pushing 30 and when they come up to talk to me, you can see them rolling back the clock talking about when they were 11 and 12 years old, and how Goosebumps fit into something specific that happened in their life.

It’s not that people are overly emotional about Goosebumps and the Goosebumps art, it’s about the experience of what happened in their life back then. My nieces are cancer nurses. My sister works as a secretary in a big hospital. Like, everybody is in the business of making people well and helping people. And I paint pictures of monsters.

There are times where you go, “Ah, you know, this isn’t that important.” When you run into people and they tell you their stories, you see that it is important. We do forget that as a society, that art brings joy and happiness and that counts for a lot.

You know, this is something that we talk about often and it’s the one thing we appreciate the most because it was great when you were 11 and 12, we’re glad that we got you excited back then, but even more by the fact that you still find joy in it and it’s still important to you. That makes a guy like me really happy.