Like the kills in every Friday the 13th or the dream scenes in Nightmare on Elm Street, the games the Jigsaw Killer made people play were always the selling point. 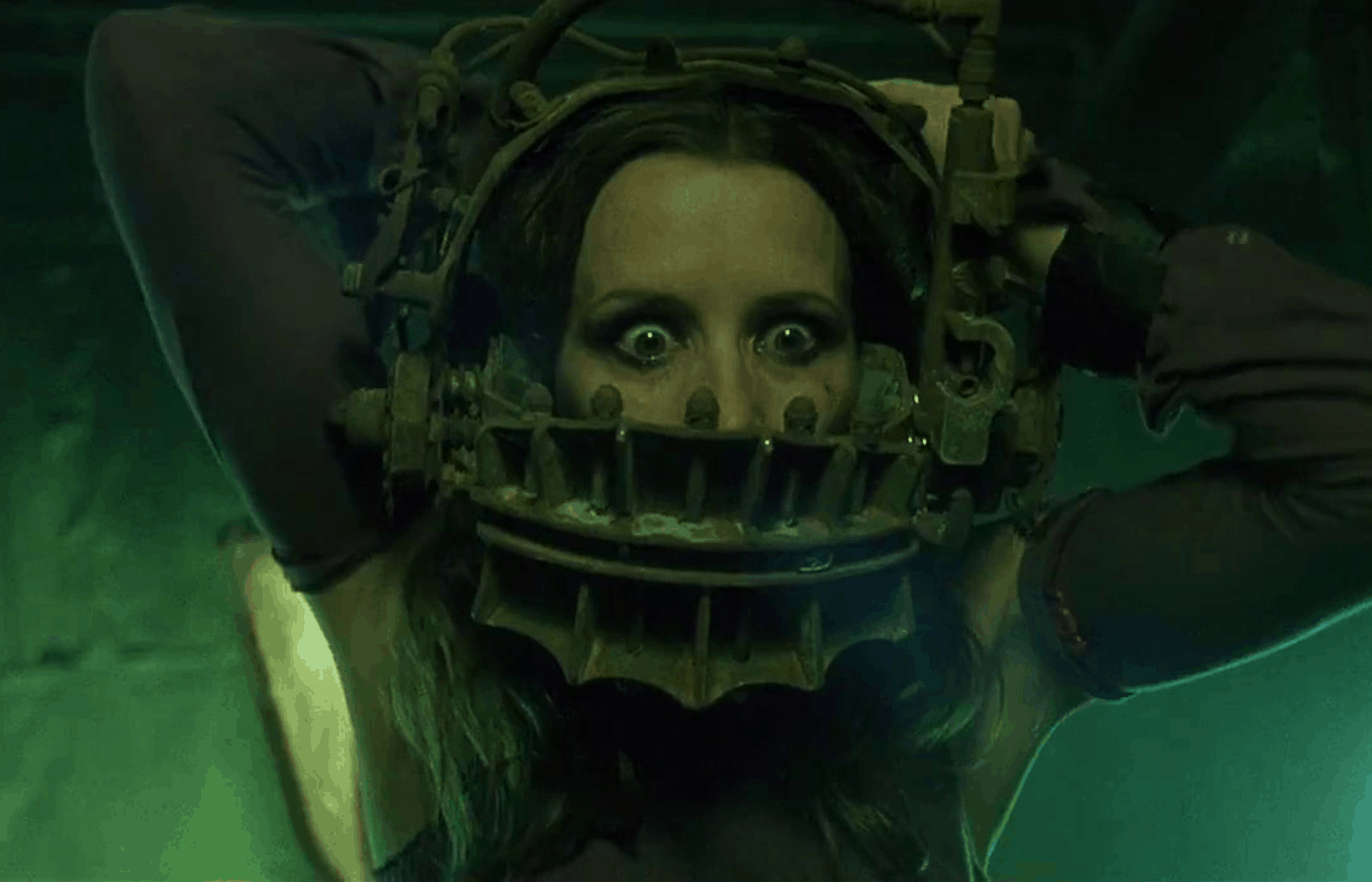 These are the Ten Best Saw Traps

Like the kills in every Friday the 13th or the dream scenes in Nightmare on Elm Street, the games the Jigsaw Killer made people play were always the selling point.

The Saw franchise began in 2004, and while the films vary significantly in quality, one thing cannot be debated, people watched these films again and again for the traps. Like the kills in every Friday the 13th or the dream scenes in Nightmare on Elm Street, the games the Jigsaw Killer made people play were always the selling point. Despite the shaky reputation and how terrible the later films got, I still love the franchise, and I look forward to seeing Spiral. These traps are the ones I personally find the most vicious, painful, and brutal, so with that said, Let the games begin.

Number 10, I feel is an easy pick; the Reverse Bear Trap appears in multiple Saw films, making its debut in the first. Simple as the name implies, a bear trap is a device that closes very quickly to trap an animal. The Reverse Bear Trap is a device that traps you at the start when it’s attached to your jaws, and after time runs out it rips your jaws apart. Vicious and gruesome, no doubt, but this trap has basically become as iconic to the franchise as the machete is to Friday the 13th, so it gets the lowest spot for just being an easy choice.

Saw 4 gives us this doozy of a trap with two men with collars that chain them to a device between them. One of the men has his eyes sewn shut, the other has his mouth sewn shut. On the back of the collars the men wear is the key to free each other. For both of them to survive, they must work together. As soon as the trap is activated by the panicking men pulling on their chain.

Once activated, their chains begin being pulled towards the device in the center of the room, which would presumably break their neck but the men fight to the death for the keys before that happens. I think what gets me about this trap is just the situation itself. Most traps in these movies, you wake up, then a puppet on TV or a voice from a tape tells you what’s about to happen, but this one the chaos is already happening before the game has even started; failure/death is all but guaranteed.

Canonically the first trap Jigsaw made, and it’s simple yet effective. The victim is sat down in a chair with blades in the armrests digging into their wrists, causing death by blood loss as the time limit for this game. How do you escape? By pushing your face through saloon doors made of kitchen knives, of course!

If you’ve ever accidentally sliced a finger while preparing dinner, you know how sharp a kitchen knife can be; now imagine it on your face. Now imagine there are about six or seven more knives than usual. Typically, some devices or mechanisms have an engine or are powered by something, but this is all on the victim. Get out of your own by cutting yourself or do nothing and slowly bleed out.

Have you ever been so cold your fingers got stiff and hurt really bad when you tried to move them? Take that feeling and picture it being over your entire naked body. This is probably the least bloody trap in the whole franchise, which makes it stand out as unique and memorable. Freezing cold water sprayed on you in intervals while naked inside an industrial freezer. This is the first trap on the list where the victim that experienced this game was utterly helpless and was a piece of another person’s game. So everything I already told you about this trap AND your life is in someone else’s hands.

This one is less of a trap and more of a challenge within a trap. In Saw II, the main game is centered around a group of people trapped within a house filled with poisonous gas and multiple deadly games that will reward antidotes if completed. This one is probably the easiest to complete on paper; the cure is on the other side of a locked door. The key is in a big hole; drop in the hole and get the key. The problem is, the hole is filled with thousands of syringes. So we have a game of finding the hay in the needle stack, but now all the needles come with a generous portion of broken glass.

This one is just an example of pure evil. Two people with devices strapped to their heads that slowly crushes their skulls based on who is losing the game. The game here is who can put the most weight on the scale in the center of the room. The contestants are given various instruments that, to be fair, could be dropped on the scale. Still, we’re already at the sixth installment of a franchise where the main villain died in the third so obviously, sensible thinking is against the rules. Being forced to hack something off at all is extreme but competing to cut off the most before your brain is liquified is just monstrous.

Almost every trap begins the same, waking up after being jumped and drugged by someone in a pig mask. So you’re groggy, vision blurred, barely conscious, and in a place you don’t recognize. The victim of this trap, in my opinion, is in one of the worst starting points of the entire Saw series. Wake up naked in a dark room, slathered in a flammable substance, the floor is covered in broken glass, and you’ve been poisoned. That’s before you even play the tape.

The antidote is in a safe, and the combination to said safe is hidden amongst the random numbers written all over the walls. Also, just to reiterate the room is dark, you’re covered in flammable jelly, and the only light source is a candle smaller than your average shot glass. As far as I’m concerned, this game would be impossible to win without pure blind luck and an absurd tolerance for pain.

This one makes me cringe every single time I think about it. Metal rings through the skin, jaw, arms, legs, shoulders, and the damn achilles tendon. These rings are hooked to chains in the walls, rip them out, and you’re free. Take too long, and you get fucking killed with a bomb. Saw III came out in 2006, and my first interaction with it at the ripe old age of eleven was walking into the living room where my dad was watching this trap playout and being scared shitless. Fifteen years later, like I said before, seeing the achilles tendon getting ripped makes me sharply inhale through my teeth and wince.

The silver medal for most brutal Saw traps goes to what Jigsaw claims to be his personal favorite. This absolute monster of a mechanism slowly twists the limbs until they break one by one. It’s disgusting to listen to the skin ripping and bones snapping and breaking through the skin, pouring blood all over the floor as the victim screams in agony. Finally ending with the head being twisted until it practically decapitates the victim.

We’ve all accidentally bent a finger too far in the wrong direction or hell fell off a bike and broke our arm, but maybe the sheer unfiltered barbarity of this trap is probably why it’s Jigsaw’s favorite. This trap boils down to essentially being the most terrifying game of Hangman ever put to paper.

Congratulations, the winner of this game of carnage is the metal venus flytrap. The device itself isn’t what makes this one the winner for me. The device is similar in nature to the Number 10 spot on this list. A spring-loaded mechanism that, once activated starts a timer that will trigger an instant Game Over.

The Death Mask goes like this, a device shaped like the jaws of a nightmarish iron beast is strapped around the victim’s neck. In front and behind the head are the halves of a mask filled with nails that will close on the head when the timer runs out if the victim does not acquire the key. The key has been surgically placed behind one of the victim’s eyes. Walking on broken glass is one thing; tearing your achilles tendon is a much more painful thing.

Cutting open your own eye with a scalpel and pulling a key out of your own skull is one of the most painful things I’m willing to imagine.

There are Jigsaw traps that involve guns or fire but speaking as someone who has never been shot or been on ablaze, so I can’t relate and therefore, it’s hard for me to put those traps on this list. This trap incorporates little bits of the others on this list. Waking up already in pain before the game has even begun? Check!

Do you have to commit copious amounts of self-harm to win? That’s a given! Damage to an incredibly sensitive part of the human body? Check! That sensitive part in question here is the eye. Having to perform impromptu surgery on yourself in a strict time limit is just brutal.

What Are Your Favorite Saw Traps?

We hope you enjoyed our list of the most brutal Saw traps. What are your favorite traps from the Saw franchise? Let us know on social media!