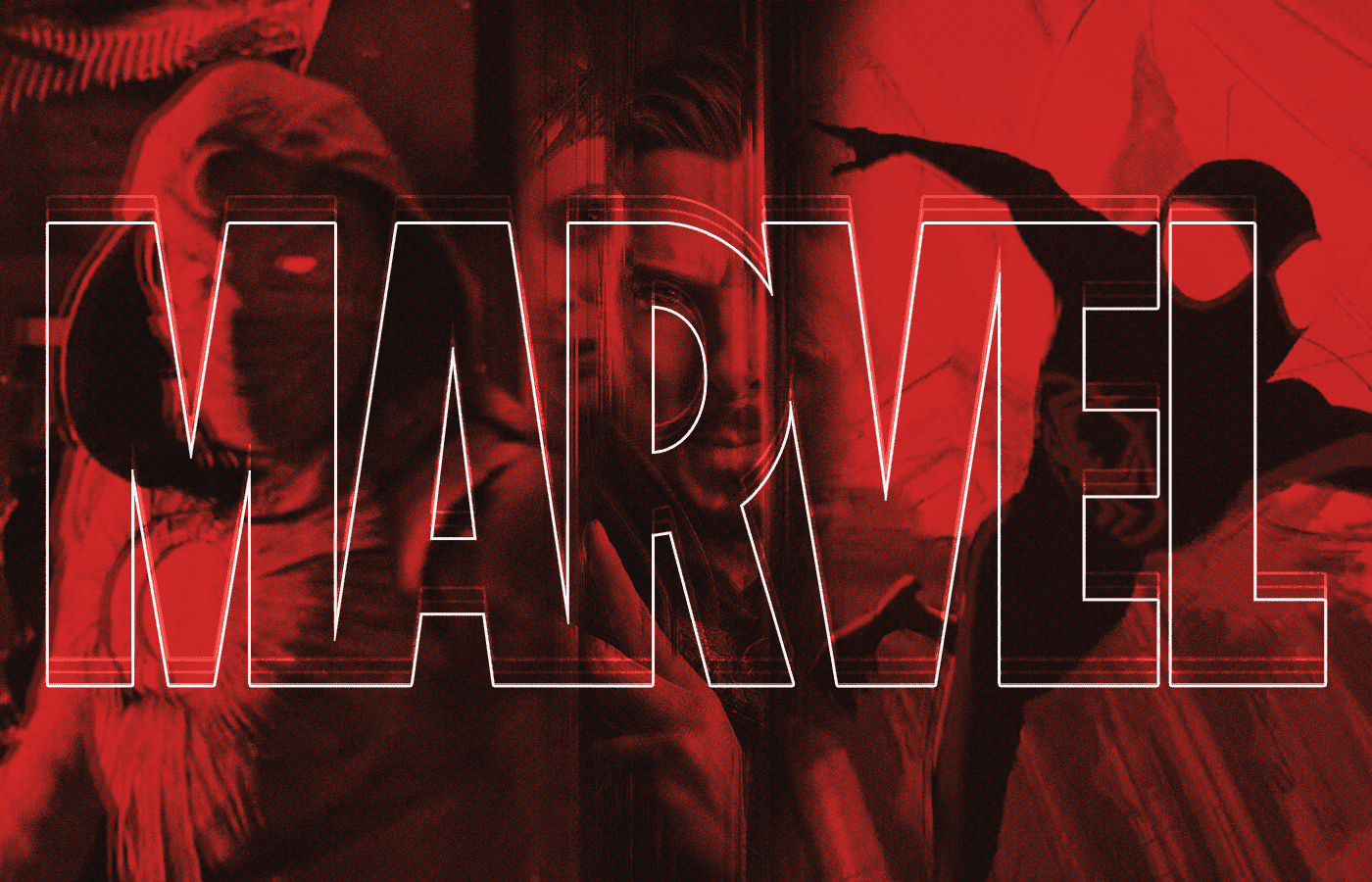 It’s a great time to be a Marvel fan! With such a vast and expanded universe of lore, characters, and Easter eggs nearly spanning fifteen years, there’s a Marvel film/TV show for everyone. The anticipation for the next major change in the MCU (Marvel Cinematic Universe) can very real and almost daunting, especially with all the rumors of what’s being made and what isn’t. So we curated this list of what you can expect to come out in the next couple years. We included all of Marvel’s upcoming television shows and films from both Marvel and Sony.

Secret Invasion is a newly announced series heading to Disney+ that stars Samuel L. Jackson as Nick Fury and Ben Mendelsohn as the Skrull Talos—characters who first met in Captain Marvel. The crossover comic event series showcases a faction of shape-shifting Skrulls who have been infiltrating Earth for years.

Secret Invasion is inspired by the comic book crossover storyline that ran eight-issues. The story involves a subversive, long-term invasion of Earth by the Skrulls, a group of alien shapeshifters who have secretly replaced many superheroes in the Marvel Universe with impostors over a period of years, prior to the overt invasion.

She-Hulk, a new comedy series coming to Disney+, stars Tatiana Maslany as She-Hulk/Jennifer Walters, a lawyer who specializes in superhuman-oriented legal cases. She-Hulk will welcome a host of Marvel characters to the series, including the Hulk (Mark Ruffalo), and the Abomination (Tim Roth). The series is directed by Kat Coiro and Anu Valia; Jessica Gao is head writer.

Jennifer Walters is a lawyer who, after an injury, received an emergency blood transfusion from her cousin, Bruce Banner, and acquired a milder version of his Hulk condition. As such, Walters becomes a large, powerful, green-hued version of herself; however, unlike Banner, she still largely retains her personality: in particular, she retains the majority of her intelligence and emotional control, although like Hulk she is still susceptible to outbursts of anger and becomes much stronger when enraged.

I Am Groot features everyone’s favorite baby tree in a series of original shorts coming to Disney+. The series consists of shorts produced by Marvel Studios, with Kirsten Lepore serving as director.

Armor Wars, based on the classic Marvel comic series, comes to Disney+ starring Don Cheadle as James Rhodes aka War Machine who must face what happens when Tony Stark’s tech falls into the wrong hands.

Ms. Marvel, launching on Disney+ in Summer 2022, is a new series that introduces Kamala Khan—a 16-year-old Pakistani-American growing up in Jersey City. A great student, an avid gamer, and a voracious fan-fiction scribe, she has a special affinity for superheroes, particularly Captain Marvel. But Kamala struggles to fit in at home and at school—that is until she gets superpowers like the heroes she’s always looked up to. Life is easier with superpowers, right?

Ironheart is an upcoming Marvel release that stars Dominique Thorne as Riri Williams, a genius inventor who creates the most advanced suit of armor since Iron Man.

Riri Williams is a 15-year-old engineering student and the daughter of the late Riri Williams Sr. Following her father’s death, Riri lives with her mother Ronnie and her paternal aunt Sharon in Chicago. A certified super-genius, she attends the Massachusetts Institute of Technology on scholarship. Working alone, Riri designs a suit of armor similar to the Iron Man Armor.

Oscar Isaac stars as Moon Knight who will officially join the Marvel Cinematic Universe (MCU) in 2022. Jeremy Slater serves as a head writer with Mohamed Diab leading the directing team. Filming for the television show began in late April 2021 in Budapest, followed by production in Jordan, which concluded in early October. Moon Knight is scheduled to be released in March 30, 2022 on Disney+ and will consist of six episodes. It will be part of Phase Four of the MCU.

Marc Spector is better known as the vigilante Moon Knight. Once a mercenary, Marc Spector was left for dead in the desert, where he was revived by the Moon god Khonshu. Appointed as Khonshu’s high priest, Moon Knight enacts justice to protect those who travel at night. Spector also suffers from dissociative identity disorder, which has paved the way for his use of other identities, including millionaire Steven Grant and cab driver Jake Lockley.

Morbius follows biochemist Michael Morbius (Jared Leto) tries to cure himself of a rare blood disease, but when his experiment goes wrong, he inadvertently infects himself with a form of vampirism instead. The film is directed by Daniel Espinosa, written by Matt Sazama and Burk Sharpless, and stars Jared Leto as Michael Morbius alongside Matt Smith, Adria Arjona, Jared Harris, Al Madrigal, and Tyrese Gibson.

Doctor Strange In The Multiverse Of Madness | May 6, 2022

Directed by Sam Raimi, Doctor Strange in the Multiverse of Madness follows Dr. Stephen Strange (Benedict Cumberbatch) casts a forbidden spell that opens the door to the multiverse, including an alternate version of himself, whose threat to humanity is too great for the combined forces of Strange, Wong, and Wanda Maximoff.

Thor: Love and Thunder is the direct sequel to Thor: Ragnarok and the 29th film in the MCU. The film is directed by Taika Waititi, who co-wrote the screenplay with Jennifer Kaytin Robinson, and stars Chris Hemsworth as Thor, alongside Tessa Thompson, Natalie Portman, Christian Bale, Chris Pratt, Jaimie Alexander, Pom Klementieff, Dave Bautista, Karen Gillan, Sean Gunn, Jeff Goldblum, and Vin Diesel. Waititi said the film would adapt elements from Jason Aaron’s run of the Mighty Thor comic book, which sees Natalie Portman’s character Jane Foster take on the mantle and powers of Thor whilst suffering from cancer.

Miles Morales (Shameik Moore) returns for the next chapter of the Oscar®-winning Spider-Verse saga, an epic adventure that will transport Brooklyn’s full-time, friendly neighborhood Spider-Man across the Multiverse to join forces with Gwen Stacy (Hailee Steinfeld) and a new team of Spider-People to face off with a villain more powerful than anything they have ever encountered.

Black Panther: Wakanda Forever is being directed by Ryan Coogler, who co-wrote the screenplay with Joe Robert Cole. Plans for the film changed in August 2020 when Black Panther star Chadwick Boseman died from colon cancer, with Marvel choosing not to recast his role of T’Challa. Other main cast members from the first film were confirmed to return by November, and the title was announced in May 2021. Black Panther: Wakanda Forever is scheduled to be released in the United States on November 11, 2022, as part of Phase Four of the MCU.

The Guardians of the Galaxy Holiday Special | Holiday 2022

The Marvels directed by Nia DaCosta, is intended to be the sequel to Captain Marvel (2019), a continuation of the Disney+ series Ms. Marvel (2022), and the 31st film in the MCU. The Marvels is scheduled to be released in the United States on February 17, 2023, as part of Phase Four of the MCU.

Russian immigrant Sergei Kravinoff (Aaron Taylor-Johnson) is on a mission to prove that he is the greatest hunter in the world. Kraven The Hunter will join Sony’s Spider-Man Shared Universe on January 13, 2023.

Kraven is typically portrayed as a renowned big-game hunter whose goal in life is to best Spider-Man in order to prove himself as the world’s greatest hunter. Though he is often overconfident in his own abilities, which he boasts about, he possesses a great sense of honor and treats his adversaries as equals until proven otherwise.

Guardians of the Galaxy Vol. 3 is an upcoming Marvel property scheduled to be released in the United States on May 5, 2023, as part of Phase Four of the MCU. The film is written and directed by James Gunn and stars an ensemble cast featuring Chris Pratt, Zoe Saldaña, Dave Bautista, Vin Diesel, Bradley Cooper, Karen Gillan, Pom Klementieff, Sean Gunn, Sylvester Stallone, and Will Poulter.

The 33rd film of the MCU, Antman and the Wasp: Quantumania is directed by Peyton Reed. The film stars Paul Rudd as Scott Lang and Evangeline Lilly as Hope van Dyne, alongside Michael Douglas, Michelle Pfeiffer, Kathryn Newton, and Jonathan Majors. Ant-Man and the Wasp: Quantumania is scheduled to be released in the United States on July 28, 2023, as part of Phase Four of the MCU.

What Upcoming Marvel Film/Show Are You Excited For?

With seventeen different Marvel movies and shows coming out over the next couple years there will be plenty of superheroes to go around. What Marvel film/show are you most excited for? Let us know over on social media.