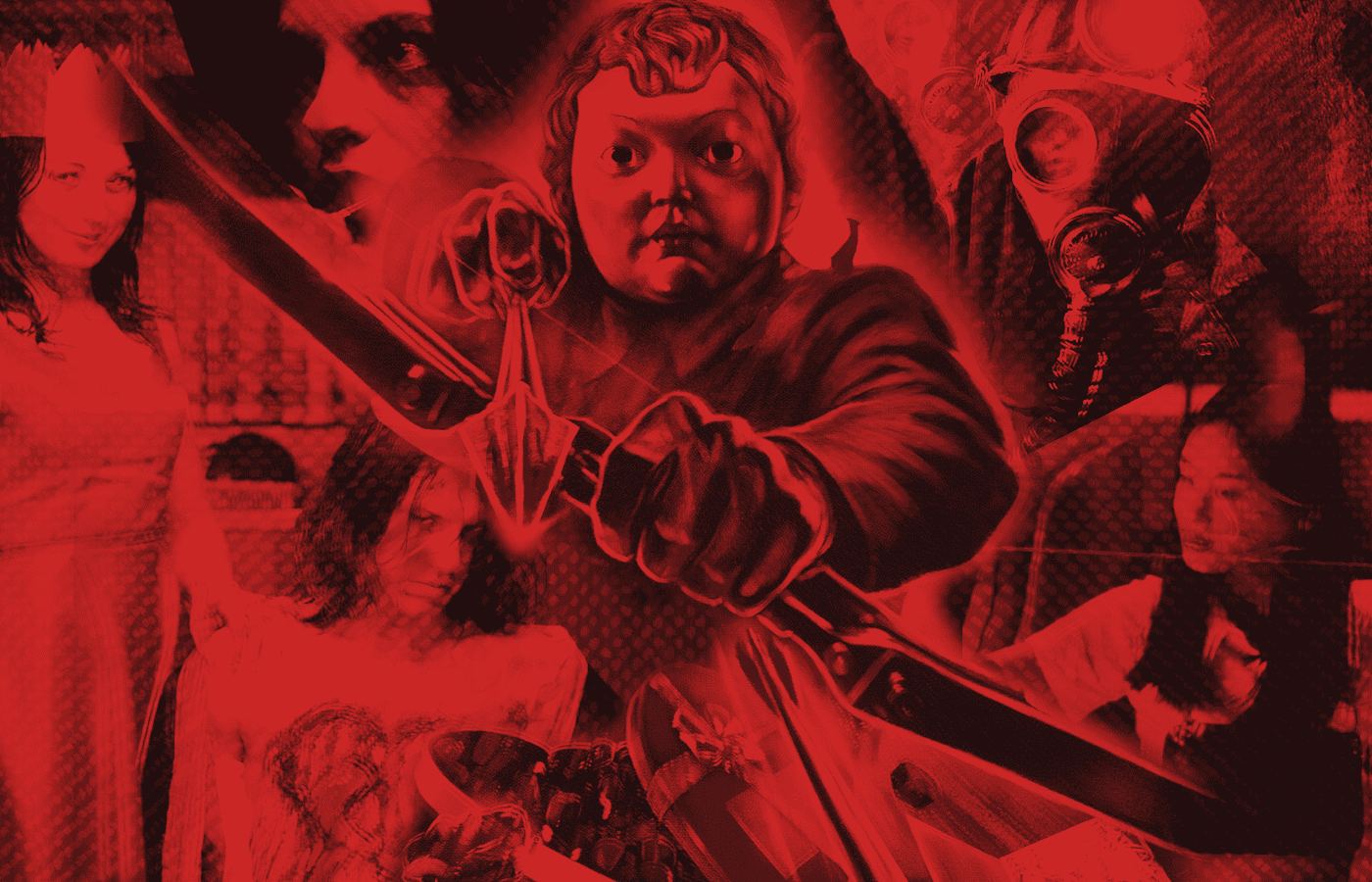 We’re spreading the dread this Valentine’s Day with thirteen horror movies that’ll put you and your loved ones in the mood… that mood being fear. Some think the 14th of February is a useless, cash-grab of a holiday and some take it very seriously. Here at PHASR we refuse nothing less than being wined, dined, stabbed, and slabbed while we watch the bloodiest horror movies around. The holiday itself can be a little loaded, so for those looking to juxtapose the giant red heart balloons and abundance of chalk flavored candies, we got just the thing.

Whether you’re in a relationship or single this Valentine’s Day, you can pop open a box of chocolates, spread rose petals around your room, and watch these lovey-dovey horror movies till your heart explodes! Each film on this list covers themes of love in one way or another. These are the thirteen best Valentine’s Day horror movies.

Ah yes, the original My Bloody Valentine is perhaps the absolute best Valentine’s Day horror movie. An all around classic 80’s slasher with an at-the-time genre favored “escaped mental patient killer” trope. This time, he survived by eating his fellow mining workers and is back for more blood on Valentine’s Day! The film is coated with Valentine’s Day imagery, from pink and white streamers, cutouts of cherubs, and chocolate boxes filled with human hearts.

My Bloody Valentine follows a decades-old folk tale surrounding a crazy serial killer hunting those who celebrate Valentine’s Day turns out to be true to legend when a group defies the killer’s order and people start turning up dead!

What’s a list of Valentine’s Day horror movies without a sequel to another movie already on the list? Okay but seriously, this one needed to be included as well. We’re happy to tell you that the plot in this one is a little different but also very much the same. There are miners, victims, blood and hearts. Except, this time it’s newer, what more do you need?

My Bloody Valentine follows Tom (Jensen Ackles) who returns to his hometown on the tenth anniversary of the Valentine’s massacre that claimed the lives of 22 people. Instead of a homecoming, Tom finds himself suspected of committing the murders, and it seems like his old flame is the only one that believes he’s innocent.

Prom is a big deal. Remember that revenge story we talked about a few movies up? Yeah, this is one of those too. What’s a girl to do when her prom date says no? Dream up a wild and horrible way to spend the evening with him instead, of course. Hey, at least there’s a disco ball.

The Loved Ones follows Brent (Xavier Samuel) who turns down his classmate Lola’s invitation to the prom, she concocts a wildly violent plan for revenge.

The Love Witch is about a gorgeous witch that uses spells to make men fall in love with her. The film is shot in 35mm that gives it a dreamy glow matching her pastel lips and rosy cheeks perfectly. She is dead set on finding a man to love her while leaving a trail of victims behind her in her glittery dust.

The Love Witch follows a modern-day witch (Samantha Robinson) who uses spells and magic to get men to fall in love with her, with deadly consequences.

We’ve all been rejected before, right? Okay, most of us. Nowadays, it’s just a swipe left to reject someone and you don’t have to see how they feel about it. May gets to experience rejection first hand. She is understandably upset and if you mix that with some massive amounts of awkwardness, you’ve got yourself this doll-making vet tech who’s not very good at handling rejection. If you can’t make friends, create them…I guess.

May follows a socially awkward veterinary assistant with a lazy eye (Angela Bettis) and obsession with perfection descends into depravity after developing a crush on a boy with perfect hands.

Directed by Peter Weir, Picnic at Hanging Rock takes place during 1900s Australia, when a young girl attending a boarding school goes on a Valentine’s Day picnic with her class at the scenic Hanging Rock. Their head mistress advices the young girls to not adventure out on their own but the girls ignore her warning. A girl goes missing and the result is a obsessive story of terror and grief. This Australian horror movie doesn’t rely on over the top violence but more so focuses on psychological horror.

Bride of Re-Animator is a new spin on a Lovecraftian horror classic. Doctor Herbert West (Jeffery Combs) is back with Dan Cain (Bruce Abbott) who discover the secret to creating human life and proceed to create the perfect woman from dead tissue. It’s an excellent horror sequel with over the top effects, that will leave you and your partner on the edge of your seat, waiting for whatever sick thing will happen next.

Season 1, episode 5 of Blumhouse’s Into the Dark Hulu series simply entitled Down follows two coworkers who find themselves stuck in an elevator on Valentine’s Day. What once starts with romantic potential, goes south very quickly (pun intended). Not the strongest entry of the series but it will leave claustrophobes terrified.

The Bride of Frankenstein is perhaps one of the greatest horror movie sequels ever made. It gave us not only the most iconic Universal Monster but also some of the most legendary quotes of the franchise. The film follows author Mary Shelley who reveals the main characters of her novel survived: Dr. Frankenstein, goaded by an even madder scientist, builds his monster a mate!

With love sometimes comes grief. In Audition, a widower takes an offer to screen women at a film casting, arranged for him by a friend to secretly find him a new wife. The one he falls for may not be who she appears to be at all. Audition is perhaps one of the most extreme horror films ever made. It’s disturbing, violent, gross, and bloody in all of the best ways. It’s a deep meditation on the obsessive nature of love and the toxic ways we manipulate others while we’re in it.

In the sequel to Blumhouse’s beloved “Groundhog’s Day” slasher, we see the return of Tree Gelbman (Jessica Rothe). Tree wakes up, similarly to the first film as she learns that she’s stuck in yet another loop. The difference? She’s now in an alternate universe where her friends are all changed. The Babyface Killer returns for her inner circle of friends. Tree must die over and over again to solve the mystery of this alternate timeline. It’s a great horror movies for teens and an even better horror-comedy for Valentine’s Day!

The third sequel to the Child’s Play franchise, Bride of Chucky takes a more comedic turn for the killer doll series. We’re now introduced to Tiffany Valentine (Jennifer Tilly), the girlfriend of serial killer Charles Lee Ray (Brad Dourif). Chucky has to come back somehow and it’s by the hands of his love that he returns. Tiffany collects the remains of Chucky to resurrect him once more.

Bride of Chucky is a great example of how love can cross between life and death… even for dolls. Jennifer Tilly knocks it out of the park with her performance, striking the perfect tone of horror and comedy. This is what makes Bride of Chucky one of the best Valentine’s Day horror movies.

“Roses are red. Violets are blue. They’ll need dental records to identify you.”

Who doesn’t like a nice revenge story? What about a revenge slasher in a cupid mask? You’ll get it all in this early 2000’s forgotten horror. Great kills and even greater drama. The killer sends a Valentine’s Day card with a dark poem to every victim signed with initials….but whose.

What Are Your Favorite Valentine’s Day Horror Movies

From crazed masked slashers to living dolls, there’s love out there for everyone… just watch out who you fall for first. What Valentine’s Day horror movies will you be watching with that very special someone in your life? Let us know on social media!