Who Will The Dark Knight Face Next? 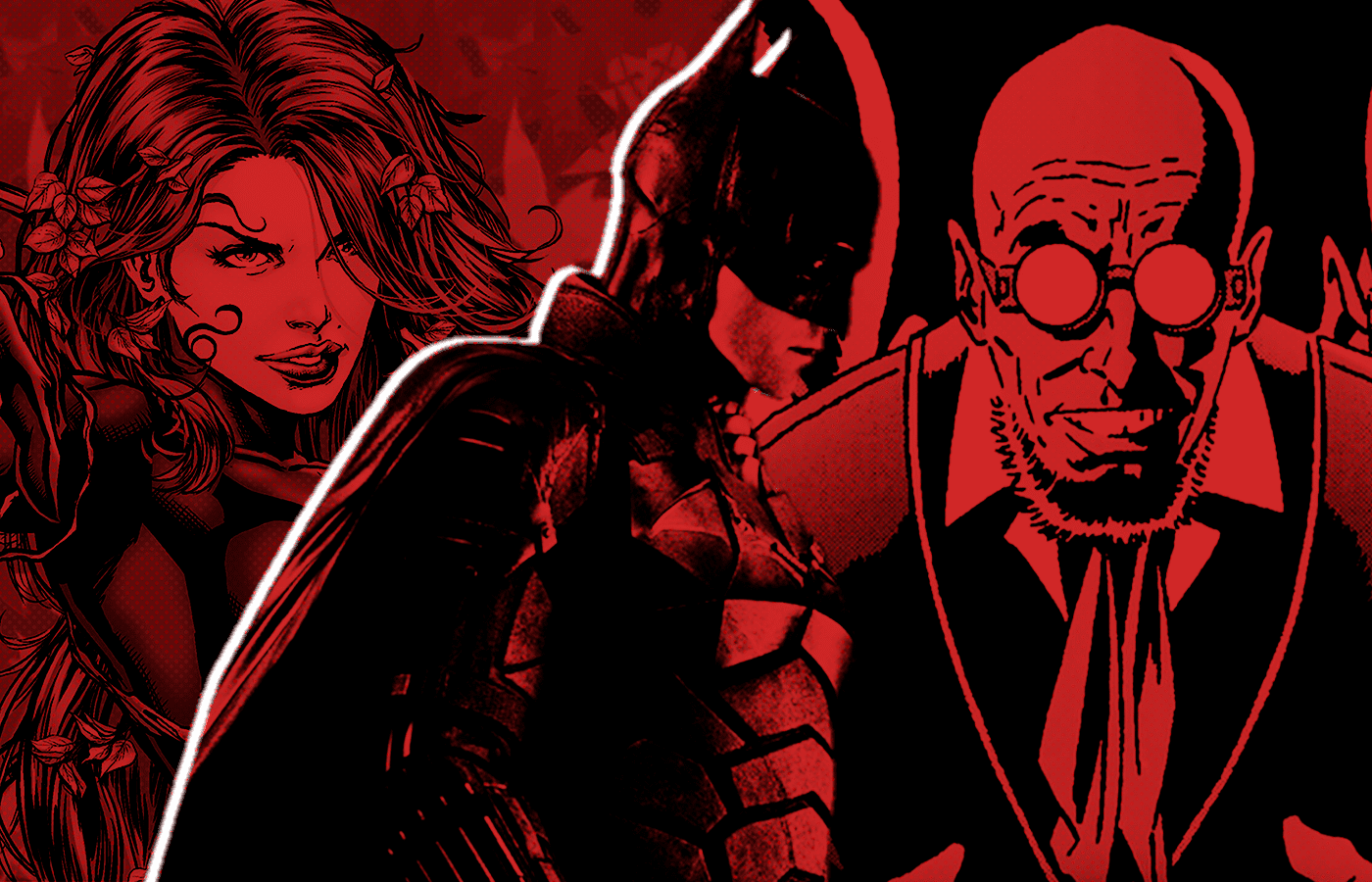 With the release of The Batman just a few days away, excitement seems to be building in fans of the beloved DC character. The film has generated quite the buzz prior to its theatrical release and has proven to be one of the most anticipated films of 2022. While we all wait impatiently to see Robert Pattinson take on the role of Bruce Wayne it’s hard to not be excited about director Matt Reeve’s vision for the film. Pattinson is joined by a fantastic group of co-stars such as Zoe Kravitz as Selina Kyle, Colin Farrell as The Penguin, Jeffrey Wright as James Gordon, Andy Serkis as Alfred Pennyworth, and more.

Yet, with an already packed list of characters; including a fair amount of villains and a sequel already announced, we can’t help but wonder what will come next. So we here at PHASR decided it would be interesting to bring you a list of villains that we believe would be an exciting addition to the future of this series. In this list, I tried my best to pick out characters that stuck out the most to me and haven’t had enough time to shine outside of the comic book world that they were created in. Here are the seven villains we’d like to see in The Batman 2.

While The Batman from what we’ve seen in trailers tries to lend its focus more to the gritty detective side of our dark knight it’s easy to say that Professor Hugo Strange would certainly be a great character to throw into this mix. Strange is one of Batman’s oldest foes, the character was introduced in 1940 and has never been given a live-action appearance. Although Batman fans were given a phenomenal rendition of the character with the video game Batman: Arkham City.

RELATED: How To Draw Batman – 6 Tutorials and References

Hugo Strange is a physically and mentally strong opponent who obsesses over toying with Batman, even going as far in the comics as to build an entire life-sized duplicate of Wayne Manor after becoming the first villain to discover Bruce Wayne is in fact Batman. There are many Hugo Strange comic storylines that could lend themselves easily to a very mysterious and detective-oriented Batman film. Hugo’s powerful knowledge of chemistry and biology mixed with his physical training makes him a dangerous opponent that would have moviegoers on the edge of their seats.

While we have already seen her several times in movies and television; Poison Ivy continues to be an incredibly popular Batman villain. It would be difficult to curate this list without putting her on it. Poison Ivy (AKA Pamala Isley) comes with an array of abilities including a poisonous touch and a supernatural control over plant life that makes her a strong opponent to best. Her antics in eco-terrorism that she always sees as “for the greater good” (which… maybe they are?) always prove to be exciting to watch, and continuously prove to be a struggle for Bruce to overcome.

Ivy is a villain that has fans of DC excited and always raises questions of morality. It would be a missed opportunity for me to not mention that with Harley Quinn already established in the DC film universe and Selina Kyle being introduced in this upcoming film, it’s impossible to not want Ivy to return to the big screen for the first time since Uma Thurman portrayal in Joel Schumacher’s Batman and Robin. Which I remain a fan of regardless of how ridiculous and wild it is.

The Batman series seems to be designed as a neo-noir-style mystery, there is really no better villain to introduce than someone who can literally be anyone. With shape-shifting powers such as his putting Clayface into a Batman film could easily make for a thrilling detective story, especially if he is not actually revealed to be in the film at all until the final act of the movie. It’s easy to imagine Pattinson’s Batman frantically looking over clue after clue from a gruesome murder in a gritty crime-filled Gotham and being led down countless dead ends with multiple suspects.

Like the previously mentioned Hugo Strange, Clayface is another classic Batman villain who has been around since the 1940s and has to this day still not gotten a big-screen live-action appearance. With his most recent appearance being the animated Harley Quinn show; (which is utterly fantastic by the way) where he is portrayed as a loveable overdramatic goofball. It would be nice to have his next appearance be something that truly shows how terrifying and deceiving his shape-shifting abilities can be. Something that can truly put Bruce Wayne’s brilliant detective skills to the test.

Our next villain on the list is also someone who has yet to have their first big-screen appearance. Solomon Grundy is a villain to not only Batman but multiple other DC heroes including Superman and Green Lantern. If DC was looking for a villain to bring together multiple heroes Solomon Grundy could be a subtle place to start. Though this is unlikely with Matt Reeves showing disinterest in expanding Batman into the DCEU. Grundy himself also has an incredibly heartbreaking and gruesome backstory that is ripe for the telling, especially in a more grounded film like The Batman seems to be.

His appearance would also blend extremely well with the visual style that DC likes their films to have, given that he is a pale zombified corpse of a man. Grundy would make an excellent villain to watch Batman attempt to defeat as well, with his extreme brute strength and near-invincible body, he has always been a difficult foe to bring down that would bring terror and destruction to Gotham.

Like Poison Ivy, our next pick is another incredibly popular Batman villain who has appeared in a couple of films prior. While he has no powers, Two-Face is a worthy opponent and has shown that many times. In looking over the trailer, a lot of classic and grounded villains are being chosen (The Penguin and The Riddler for example.) If these films continue to take this route and stick more to the path of Batman handling cases like an actual detective and less like a superhero, then Two-Face would be a prime character to be used.

Incorporating a mafia boss-type character in which Batman would have to take down little by little could make for a thrilling and suspenseful version of a Batman flick that would most likely feel similar to how The Joker (2019) did. Two-Face is also a wonderful character to have around if you are intent on showing both the good and bad sides of Gotham and how easily a man can change for the worse, as well as the political side of the city and Bruce Wayne’s involvement in the upper-class world of Gotham.

Mr. Freeze is perhaps the Batman villain with a long-overdue second chance. The character is a master in cryogenics and as his wife is dying of a rare disease he freezes her for a chance to discover some type of cure.

The story of the icy villain is heartbreaking, scary, and makes for a visually brilliant antagonist. Perhaps it could be written in The Batman sequel that the Wayne’s were responsible for the downfall of Victor and Nora. Tragedy ensues as Victor seeks a cure as well as revenge!

The Court of the Owls

Our final villains on the list are the Court of the Owls, a mysterious league of assassins’ that resides in the depths of Gotham city. The Court was introduced in DC’s New 52 run of Batman as a mysterious owl-masked illuminati-esque group and since their inception have exploded in popularity amongst comic book fans. It’s criminal how underutilized the Court of Owls are, aside from a handful of animated VOD films, they’ve really not shown up in a major Batman property until the upcoming video game Gotham Knights.

The Court of the Owls also seem like the most likely villain for the sequel because of Robert Pattinson’s advocacy for them in an interview with Den of Geek. Pattinson said: “I’d love to do something like Court of Owls. There are elements of The Batman which are kind of horror and I think it really feels quite new for Batman.” Perhaps with the star’s interest, combined with the support of DC fans we might get some feathered foes in our future.

What Batman Villain Would You Like To See In The Batman 2?

With a character like Batman being such a beloved character by many that have had such a long-running history and an incredible arsenal of villains that he has faced off against over the years, you can imagine how difficult this list was to make. Most of his villains have made appearances in movies, animated or live-action television shows, as well as video games but have never had the chance to shine on the big screen.

With villains like the Joker who have become fan favorites and taken on a life of their own, it’s easy for others to be lost or overshadowed at times. That being said, I believe that this list is a fairly good acclamation of characters that are popular enough to be known by a majority of audiences were they to be brought to the big screen, but also deserving of just a little more screen time to be showcased to the world. What villains would you like to see in a Batman sequel? Let us know on social media today!