Vivarium: An Interview with Lorcan Finnegan

The idyllic language of quality family homes forever is intended to lure in unsuspecting couples that have dreams that are simply too far out of reach. 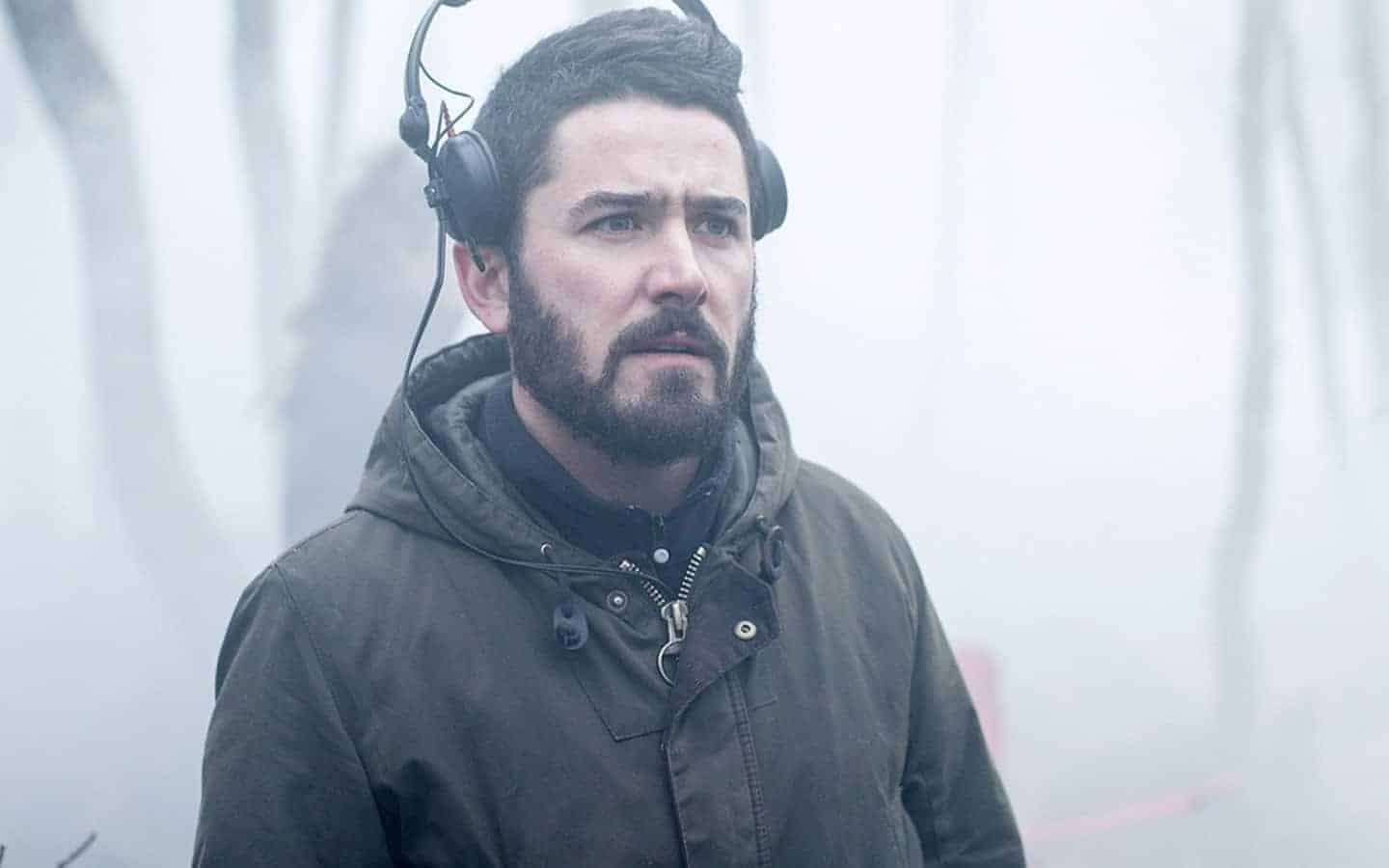 Vivarium: an enclosure, container, or structure adapted or prepared for keeping animals under semi-natural conditions for observation or study or as pets; an aquarium or terrarium.

Martin: “You’re a Mother. Someone who prepares her son for the world.”

Gemma: “What does a Mother do then?”

Vivarium (2019), the latest horror film by Writer-Director Lorcan Finnegan, is a devastating snapshot of the confines of normalcy—framed within the labyrinthine setting of the suburbs. Planned communities designed with intricately symmetrical cookie-cutter aesthetics have always been unnerving to me for a plethora of reasons.

The film heightens those fears and cranks them up to eleven by meshing together the science-tech horror of Black Mirror (2011) and the unfathomable regions of the Twilight Zone (1959). In an exclusive interview with PHASR, Writer-Director Lorcan Finnegan answers some of our most haunting questions. This interview was condensed and edited for clarity. Enjoy.

There is a chilling intimacy to home-tethered horror stories because you always have to return there for food or shelter, thus making the location a source of dread by proxy of its very existence. In your previous short film Foxes (2012), you positioned your story in another foreboding house. What engendered this anxiety for you and why do you think we’re so terrified of suburbia as a concept in our modern age?

Lorcan Finnegan (LF): I think suburbia…there’s been two different types of suburbia over the years. The initial kind of Americana suburbia post-war was actually kind of a good thing—kind of a Socialist thing to get people things they needed—but then after that was a more insidious type of suburbia which was a kind of idealized way of living…a type of life that was advertised heavily with young couples and by banks and by developers to sort of move into these places and settle and to have some sort of great life.

It became kind of aspirational. They’d try and normally fit as many of these units as possible using a kind of fractal pattern. I find those places particularly creepy because of the homogeneity of them and how people are being asked to conform to something that’s very pre-designed or pre-laid out for them and once you get into a place where everything looks exactly the same it’s very easy to get locked into because it becomes a landmark and the developments can become very nightmarish and very trippy.

The housing developments that kind of inspired the story were of some leftovers after the recession in Ireland, because there was a big housing boom and then a big income crash that left all of these empty housing developments that became known as ‘ghost estates’. So we actually shot the short film Foxes in a real ‘ghost estate’ and they are what inspired Vivarium and these very strange places that are almost like graveyards, that were leftover from a purely consumerist capitalist greed.

I’m enthralled by the planned neighborhood in Vivarium you created named Yonder, which is essentially a petri dish or a slide under a microscope in the larger narrative. Do you believe our current housing plans are also housing an ominous intent of surveillance and study?

LF: Maybe. There’s certainly something whenever it’s built from scratch these days where a lot of that surveillance aspect is built-in and it depends on how paranoid you are. Some people think that their Amazon Echo is listening in to them and reporting back on all of their behavioral patterns—even the couples that order things online; it’s like mirroring what people do in the suburbs. They stay indoors. They’ve lost their sense of community. They don’t know their neighbors. They get deliveries from Amazon. Our couple (in the film) are definitely in line with that.

Gemma (Imogen Poots) and Tom (Jesse Eisenberg) are merely interchangeable cogs of the suburban machine. They are unwitting pawns of a far sinister game—scientific study. Martin and all of the realtors before him are inhuman, thus making them perfect candidates to study and infiltrate the human experience. What inspired you to create this insidious hostile takeover story?

LF: Well to me they’re like a brood parasite. So one of the inspirations for the story is a documentary about the lifecycle of the European Cuckoo which is a BBC documentary by David Attenborough that Garret Shanley (the screenwriter) and I watched because we were trying to come up with a monster for our age and tap into the anxiety and fears that young people really have.

Rather than being scared of monsters they’re afraid of their hopes and dreams disappearing and their lives becoming boring and repetitive and being tied down with a mortgage and paying off a mortgage on a house they don’t really love. We were trying to find a suitable monster for that kind of story and covering those kinds of themes.

That’s where the Cuckoo came in as the real estate agent. There’s a degree of these false real estate agents that have a symbiotic relationship with humans and they don’t raise their own young and have to trick young couples to become surrogates for them. So, its basically a reflection of nature and that’s why we open on the scene with the Cuckoo chick ejecting the other chicks from the nest. That’s what they do in real life.

The Cuckoo bird allegory is one of the best and most unexpected foreshadowing moments I’ve seen in horror film(s) recently. This is a rather funny but serious question as a chicken and the egg metaphor. Which came first, your horror at the Cuckoo bird’s deceptive enterprise or the egg of a story at the center of Vivarium?

LF: We had the kind of setting in mind because after we made Foxes we started on Vivarium and we made this feature in between called Without Name (2016) that focused on land ownership and this entity protecting this forest. So, we were digging deep into these types of themes.

We were coming up with the story that was going to be set in a vast housing development that was endless in more of a sci-fi way than Foxes which was more supernatural. I think we were already setting up the story at the time that we discovered the Cuckoo aspect and that sort of fed into the story. It’s really difficult to tell because these things sort of get cooked into the story.

One of the most beautiful and unsettling aspects of Vivarium is the utilization of stark and jarring contrasts in color. Plus, color-blocking is a gorgeously effective tool of storytelling. For example, the crisp black and white that Martin (Johnathan Aris) wears, the pea-soup color of the houses, and the ‘traditional’ pink and blue clothing you trap the unsuspecting homebuyers in.

Were there specific reasons for these colors and were they larger parts of your writing process, as a commentary on cold utilitarian function or unhealthy gender-based politics?

LF: They were connected to the story more. I’m really obsessed with color theory in film(s) in general. I was trying to find a palette that felt sort of toxic and also quite anxiety-inducing. That kind of green is a quite unnatural green. Even green in nature gives you this feeling of vibrancy and life but taken out of nature entirely it can take on a kind of toxic poisonous quality.

Shifting it into that kind of hue, that pastel minty green creates this slightly institutional sort of feel. The color itself does have a psychological correlation with anxiety and that’s the primary reason but it was also going to bounce light back onto the actors’ faces and I needed to make them look kind of sick throughout the film. It’s like the place is making them sick. Their clothes and the color of their wardrobe…I worked out the color palette throughout the entirety of the movie. Tom’s clothes are definitely more earthy in brown tones because he’s a gardener.

He works outside and has a connection to the earth which he then uses to start digging a hole in the film. For Gemma, she’s more ethereal, wild, and carefree and a schoolteacher so she has a more aquamarine and pale-blue color (palette). I also wanted to keep them in the same wardrobe throughout the film as if they hadn’t planned on getting stuck in the film. They were just at work that day. Tom also has a yellow shirt at the beginning of the movie and then Gemma wears it towards the end that implies that element of danger that’s about to take place.

In Vivarium, you explored the horrors of parenting. The entrapment of raising a child and parents unknowingly and symbolically digging their own graves was brilliant to watch unfold. Do you see the process of raising a child as an inescapable loop of repetitive action with minimal holistic merit?

LF: No, I don’t think that raising your own child or a normal human child is futile. The thing about the film is we show normal children in the classroom. They’re nice, they’re normal. The little girl says she doesn’t like the way things are (in the world when she sees the dead bird pushed out of the nest) so she represents this new generation that may change things for the future, for the better but in the couple’s case, they’re raising a child that isn’t human and isn’t their own.

His primary objective is to manipulate them into taking care of him and for him to be able to learn how to act like a human well enough to convince somebody to come into (Yonder) afterward. There’s definitely a mirroring of life and raising of a child (in this film), but at the same time what I find most interesting about all of it is that he isn’t theirs, and therein lies the conundrum. They’re right to reject him because he’s not their own.

Under the Suburban Microscope

The film Vivarium is one that lingers in the mind due to its adept socio-political underpinnings. Writer-Director Lorcan Finnegan continues to impress with his visual style and continuous moments of poignant humanizing reflection. The setting that he creates named Yonder is a cold and sterile place that is described as “near enough and far enough and just the right distance.”

The idyllic language of quality family homes forever is intended to lure in unsuspecting couples that have dreams that are simply too far out of reach. Economic wealth gaps are widening and many people in their 20s, 30s, even 40s cannot afford the bygone dreams of housing past. Thus, the insidious nature of Yonder, the interchangeable Martin realtors that sell the homes, and the facsimiles that stand in for human creature comforts.

This film is reminiscent of John Carpenter’s They Live (1988) by proxy of its extraterrestrial amongst us— studying us—manipulating our themes. The infiltrator and mimicry alien nature of the realtors heightens this film and makes it rife for a sequel or television adaptation and I hope that Director Finnegan returns to this world he created in the future.

Vivarium is now available on Digital and On-Demand platforms.